On Thursday, Indrani will be obligated to change into the green uniform sari she receives visitors in, as per jail rules, and meet the gentlemen from the income tax department.
She may also at some point on Thursday video conference with Delhi in the INX Media-Karti Chidambaram case where she might become an approver.
Vaihayasi Pande Daniel reports from the Sheena Bora murder trial.
Illustration: Dominic Xavier/Rediff.com 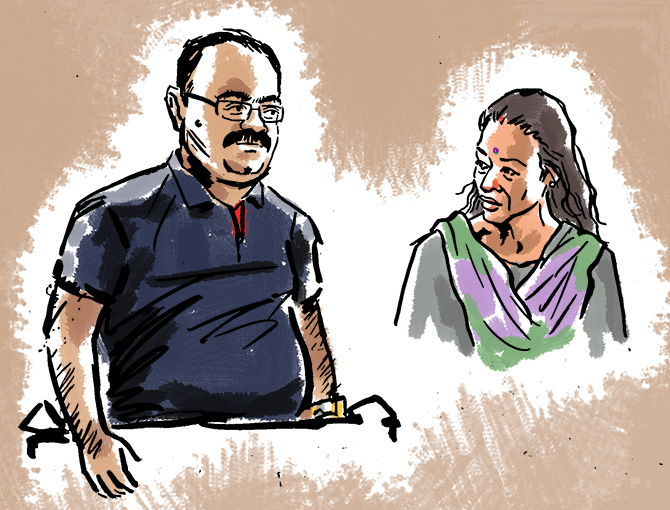 The Mumbai city civil and sessions court, located in south Mumbai at Kala Ghoda, where the annual colourful arts and craft mela is in lively progress this last week, is still under repair. And a grim contrast to the fair.

As the building's repair job progresses languidly, over the last year, or more, the court puzzlingly looks increasingly more and more rundown, shrouded unhappily in cement and dust. Cast-off construction material and trash add to the mess, both inside and outside/beyond the premises.

As I entered, I wondered -- like I do each time for the past two years -- am I at the right address? Is this one of Mumbai's premier courts, a temple of the country's democracy?

The cement and dust from both the construction of this building and the stretch of road behind is underfoot, seeping between your toes, getting to the insides of your sandals and rising in clouds into your face, even 1,000 metres before you reach the building. A face mask is the need of the hour.

Is it any wonder that COPD (Chronic Obstructive Pulmonary Diseases), brought on by dust, is the second largest killer in India as one recently read?

As I climbed the stairs to the first floor I ran into a cute little girl of four, the child of an accused, playing in a large heap of cement-sand dust with a sharp piece of discarded rusted iron rod.

The entryway to Floor 3, where the Sheena Bora murder trial takes place was entirely dug up and even the gaps in the walls had been widened in places and the sunny courtyard below was visible, shining through the tattered, gaping holes. The benches and seating were disbanded and stacked up in the corridor outside the door of Courtroom 51.

Rony George, 48, entered the witness box on Wednesday, February 6, as PW 30 (Prosecution Witness 30) in this trial, that started in February 2017, and the newbie pretty young clerk swore him in asking him to "swear to speak truth."

His role was peripheral and his evidence+cross examination lasted not much more than an unimportant 30 minutes.

He, a psychiatric social worker, had to vouch for having admitted and taken care of Sheena's brother and Indrani Mukerjea's son Mekhail Bora for "eight to 10 months" in 2006 at the Chaitanya Institute for Mental Health, Katraj, Pune, where George had been the director, and is still listed as the director.

And what did that have to do with Sheena's murder and the case against Indrani?

Mekhail, in his impassioned and lengthy testimony in August 2018 in this court, had alleged that Indrani had forced medical treatment on him with a much darker purpose planned, stemming from an evil mind. And that he had been admitted against his will to the Masina Hospital, Byculla, south central Mumbai, for mental health issues he was not aware that he was suffering from.

Last month, Dr Yusuf Abdulla Matcheswalla, formerly head of the psychiatric unit at the Masina Hospital, testified rather authoritatively that Mekhail had suffered from what he termed substance-induced psychosis, brought on by usage of tobacco and cannabis, that could have led to him have the associated symptoms whereby a person was "Aggressive. Violent. Suspicious. Unrealistic." And for which he had received electric shock treatment.

The psychiatrist stated that after a two-month stint of care at Masina he had referred the boy to the Chaitanya facility at Katraj for rehabilitation.

According to George -- who was addressed as Mr Rony by the prosecution -- when Mekhail arrived in Pune he had looked at the case papers that came with him and he confirmed that Indrani's son was suffering from "drug abuse psychosis and conduct disorder." (Is drug abuse psychosis still a glorified term for simply use of drugs, even if we were told it was more than that?)

George, whose accent made it apparent that he hailed from Kerala, was a tall, large man, bespectacled, with a prominent black mole on his right cheek. He wore a dark-blue T-shirt, with red edging at its buttons, jeans, and black sports shoes with red laces. A hefty gold-silver watch was on his left hand and he sported a gold necklace.

This social worker had been working at Chaitanya, he said, for 16 years from 1999 to 2015. He had a master's in social work and a further degree in psychiatric social work. He lived in Pune.

The tall woman prosecutor asked if Mekhail after admission at Chaitanya was also treated there.

CBI Special Judge Jayendra Chandrasen Jagdale, tickled, quipped: "He was admitted without treatment (in a hospital)?"

Patil crucially enquired if Mekhail had had any visitors.

The judge, who was dictating to the court stenographer, repeated, perhaps surprised: "Once? Only once."

The social worker went on to tell the court that Mekhail had fared well at Chaitanya, improving and even writing his Class 10 school-leaving board exams while admitted.

George through his testimony in chief, like Dr Matcheswalla, if you believe their diagnoses, basically negated Mekhail's maybe paranoid but emotional, pained claim that he had been mistreated by his mother and these psychiatric professionals, when he was exposed to their treatment.

At these moments one wonders, befuddled, whether the witness has been brought by the prosecution or defence to the witness stand in Courtroom 51 in this murder case. Whose witness was he? To uphold the prosecution's case or to help the defence?

Mekhail had been rather effective and moving while testifying in 2018 about his rough treatment at the Masina mental health facility. He had said he remembered being tied up, his head shaven, administered electric shocks and whacked about.

That is something, newspaper reports inform you, is not unheard of at many of our psychiatric institutions. And Mekhail's account clearly and bluntly cast aspersions on a mother who had put her son through such kind of care, even if one followed the adage that a little pain could bring greater good.

But the psychiatrist, in January, and the social worker, on Wednesday, both prosecution witnesses, had strengthened Indrani's hand by confirming that her second child, and only son, had had a cannabis-related disorder and that his drug use had had consequences that even led to, as Dr Matcheswalla put it, "aggressive behaviour", implying seeking hospitalisation for Mekhail had been a reasonable wish by a parent.

After George declared that Indrani was in court, although he didn't point her out, Indrani's lawyer Sudeep Ratnamberdutt Pasbola got up to cross question George.

He prefaced his questions with a charming smile and the remark to the judge that he was there: "On instructions! There is nothing to cross examine."

Firstly, to authenticate that Mekhail's admission to Chaitanya 13 years before had followed routine procedure, involving evaluation and study of the case file and discharge summary from Masina.

Such an evaluation had taken place at Chaitanya and the facility had five psychiatrists attached -- Mekhail was seen by Dr Shailesh Chowgule and Dr Rohan Jahagirdar and left with another case file and discharge summary from Chaitanya.

And secondly if George had been called upon to give papers relating to Mekhail's case history to the CBI when he was interrogated by Investigating Officer Kaushal Kishore Singh.

A moment of odd silence greeted that.

Pasbola had made his point.

Nor had George volunteered to submit these papers to the CBI and he tried to explain why not but Pasbola cut him off with a brusque, clipped: "Answer the question (a line Pasbola must use 50 times a day, daily, in his long career)!"

George, an even-tempered sort, gave up and finally baldly agreed he had never volunteered. And he had not been asked to bring case papers to the court on Wednesday either.

A few minutes later his 30 minutes of fame in the trial were over and the social worker departed.

Five minutes of George's 30 were subtracted, and became 25, by the over demonstrative court tabby cat, who is nicknamed Sheena. She came meowing in to visit the three accused Sanjeev Khanna, Indrani and Peter Mukerjea, climbing the steel trunk in front of them, waiting obstinately for a pat from each. The court peon Waghmare came and took her away.

There was considerably more activity in Courtroom 51 outside the witness examination on Wednesday.

Apparently, if one heard right, there had been an enquiry from the income tax about some international account of Indrani and Peter's in New Zealand.

Indrani spoke to the judge twice, once from the stand.

Cloaked in a purple and green bandhani chunni, wearing a green and purple, sindhoor, pearl earrings, a twinkling green bangle, her eyes carefully outlined with sharp black kohl, like the eyes of a goddess Durga in a Kolkata pandal, her hair flowing about her, Indrani is easily the most feminine phenomenon to inhabit these colourless corridors, where woman are mostly clothed in manly black jackets.

She spoke to the judge in a whisper, over respectfully, asking bewildered how she could give a statement in answer to an enquiry since she was in prison.

The judge, a ghost of a smile on his face, carefully explained to her how the process would unfold.

Another confused person, a man from the income tax department also reached the stand, to convey the income tax enquiry information to the judge that he needed a statement from Indrani for. He later told Indrani he additionally required information from another man too, who turned out to be Peter, who she exclaimed was her husband.

Indrani was in a bit of a tizzy because she told anyone who was listening, in eloquently enunciated tones, that she did not have access to at least 98 percent of her papers because "I am in prison." And was not sure what statement she could give on Thursday.

Further, she had a "VC" scheduled with Delhi too, which she referenced to the judge about.

The judge passed an order which stated: "Letter received from deputy director of Income Tax (inv.) Unit-3(2) Mumbai for permission to record the statement of accused no. 1- Ms Indrani Pratim Mukerjea U/s 131 of Income Tax Act 1961... The accused Indrani Mukerjea is appraised of the said notice and with mutual consent the date is fixed for recording of statement as 07/02/2019 at about 2.00 pm at Byculla Jail Mumbai."

Peter's bail hearing was to resume on Wednesday. But there was no news of that. He was also awaiting information on it expectantly. CBI Special Prosecutor Bharat B Badami was not present in court. Nor was Peter's lawyer Shrikant Shivade.

Keeping up the accelerated pace, Judge Jagdale asked for the next witness, actor Balbinder Dhami's driver Imtiyaz, to appear on Friday, February 8.

Before that on Thursday, Indrani has a busy, important day, probably the way she likes her days to be.

She will be obligated to change into the green uniform sari she receives visitors in, as per jail rules, and meet the gentlemen from the income tax department. She may also at some point on Thursday video conference with Delhi in the INX Media-Karti Chidambaram case where she might become an approver.