'The entire rescue operation was very dangerous, and something we have not experienced before.'
'It was different from what we experience on the seas.' 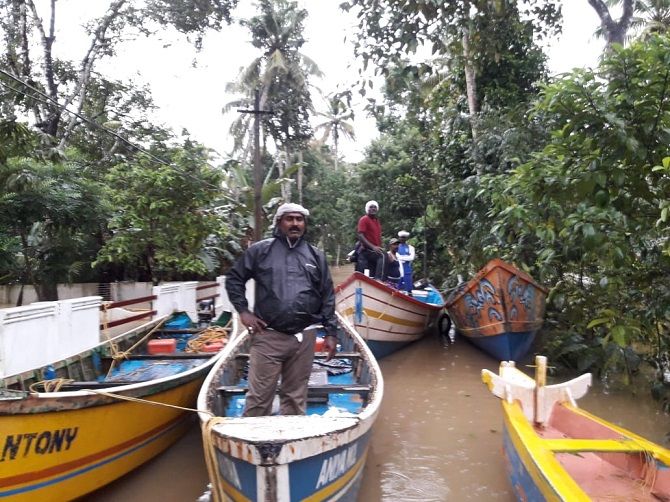 IMAGE: A fisherman in one of the boats used in the rescue operations. All photographs: Kind courtesy Jack Mandalo 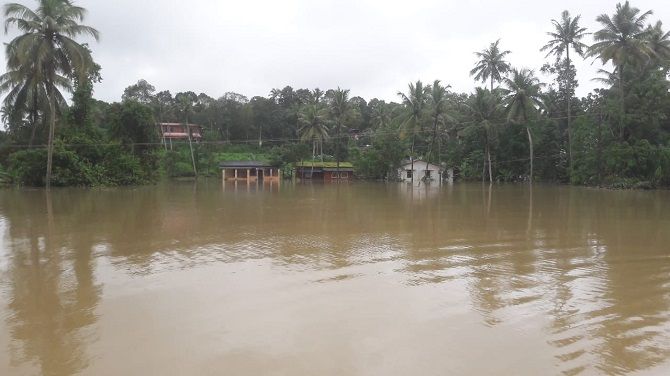 IMAGE: A view of Aranmula village. The entire village was flooded with water.

The Kerala floods have been described as the worst the state has faced in a century.

Hundreds of people were involved in the massive rescue operations and the contributions of the fishermen of Kerala and the Indian Navy were unparalleled.

Jack Mandalo and a group of fishermen from Valiaveli in Thiruvananthapuram were involved in the rescue operations in Aranmula. He recounts his experience to Rediff.com's Shobha Warrier.

August 15. Early morning we got a message from the Thumba SI (police sub-inspector) asking for volunteers to rescue people in Chengannur.

Many people came forward and we immediately arranged for two boats to be taken to Chengannur along with a few fishermen.

At night, we were told they needed more men and more boats. That was when I along with 18 others went to Aranmula.

We had taken with us five boats, but from Valiaveli and Vizhinjam, 40 boats were sent for rescue operations at various places in central Kerala. IMAGE: Boats and fishermen brought to Aranmula by trucks.

The boats were transported in trucks by the police while we traveled by bus. We did not have enough fuel, so the police had to forcibly take fuel from many blackmarketeers.

We also collected petrol at night from a petrol bunk. In fact, the pump owner who was recuperating from dialysis came to the pump himself to help us fill petrol.

We started at 2 at night, but when we reached Adoor, we found that the boats and men we had sent in the morning were still there, waiting for orders from above to start working.

Early in the morning, we were asked to go to Aranmula and they went to Chengannur.

When we reached Aranmula, all we could see was water everywhere.

It was beyond our expectations and a chilling sight.

The first floor of almost all the houses were under water and we saw people either on the first floor or on the terrace. It was also raining heavily. There was nobody there; no media, no army personnel. Rescue operations had not started though a day had passed.

But they had already opened a camp and those who could escape before the water reached unprecedented heights were there in the relief camp.

We were told that the locals had rescued around 15 people using a raft made of bamboo. 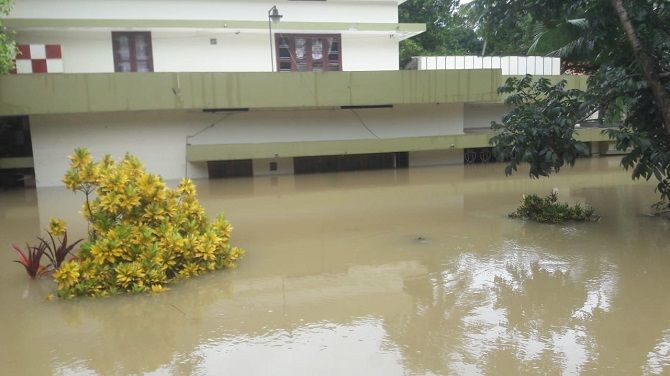 By 10 in the morning on the 16th, we started rescue operations.

In each boat, other than two fishermen, there was a local who knew the place as we had no knowledge of the area and a policeman.

The local person used to navigate and tell us how many people were trapped in each house. In fact, when we reached, they had already with them a list of people trapped.

There was a lot of pressure and pleas from relatives and we were clueless where to go first. The pressure from people resulted in a lot of confusion.

Everybody wanted us to go to where their people were first. 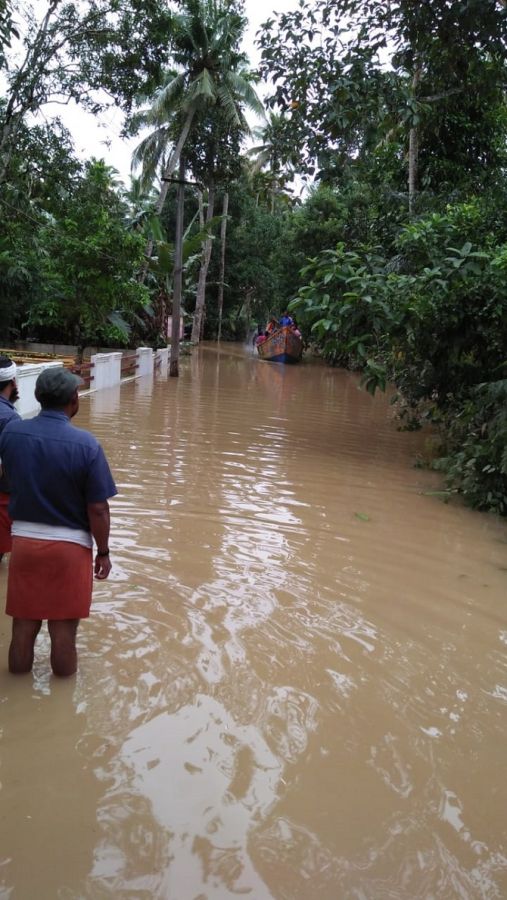 Our first trip was to a hospital, the first floor of which was completely under water. It was not just stagnant water, it was more like a river flowing fiercely.

That was why we had to tie the boat to the first floor railings of the hospital. Then, one of us got in.

We helped the people get down from the first floor while our person standing on the boat assisted them to land on the boat.

There were 16 patients, a few doctors and nurses in the hospital.

The first people we rescued were a mother and a nine-day old baby. They had gone to the hospital because the baby was not well and got trapped there.

Then, there was a very old lady with an oxygen cylinder connected to her.

Rescuing her was very difficult as we had to carry her along with the oxygen cylinder.

We evacuated the patients first and only in the afternoon, the doctors and nurses were rescued.

On the first day, we may have rescued around 700 people using seven boats.

When night fell, the collector asked us to stop the rescue operations as the place was not known to us. Next day, we started at 4 in the morning. The second day was the toughest because that was the day we were trying to go to places that were inaccessible.

We had to take small boats to go to these places, bring these people to where the big boat was tied to some post.

We then transferred them to the big one. It was a huge task.

We saw people stranded on the terraces, but the gates were locked. They may have locked the gates at night and by the morning, there was water inside the house.

Without opening the gate, we could not take the boats inside and there was no way we could fetch the keys.

There were many instances of us going underwater with iron rods, breaking open the locks of the gates and entering the compound.

The flow of water was so strong that we held onto electric wires at many places and moved ahead.

Still, we hit trees and walls frequently, and with each impact, the boat shook violently.

With each collision, people on the boat would shout in fear.

Our fear was about the boat capsizing. If it had happened, there was no way we could rescue all the 15 or 20 people on the boat. Luckily, nothing of that sort happened.

We would tell everyone to look down all through the ride and not look up as they got panic attacks when the boat got collided somewhere and shook.

If they moved violently, it could even topple the boat. None of these people had any experience in travelling on a boat and that too under such circumstances.

Most of them didn't even know swimming. 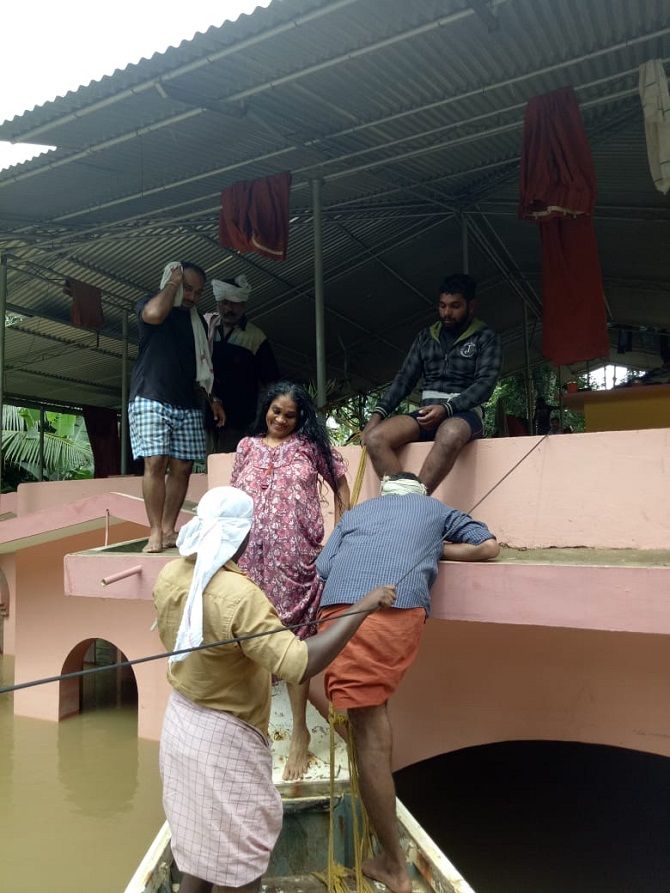 We saw these people praying loudly during the entire trip.

I heard Hindus, Christians and Muslims praying to their gods at the same time.

That was when I felt only floods could unite these people who might have been fighting in the name of religion till then!

By the second night, they found that we had rescued 95% of the people stranded. The rest had decided to stay back and wait for the water to recede.

The collector decided to end the rescue mission and gave us permission to go back. We must have rescued around 2,000 people in Aranmula in two days.

Aranmula panchayat sent us back only after giving us a letter of appreciation.

We cannot but thank the people of Aranmula who were there with food and hot tea or coffee whenever we came back with people, and we had it as we went back to bring more people.

They took care of us so well that we will never forget their love and affection.

By the third morning, we were back in Thiruvananthapuram.

We decided to turn down the Rs 3,000 offered by the state government as we did not go expecting any money.

It was a voluntary service. Nobody forced us to go.

Our boats and engines were badly affected after the rescue missions.

What destroyed our boats were the nails stuck on compound walls.

When the boats got caught between the nails and the compound walls, we had to get out of the boat into the water and pull it away. The propellers of the engines were also broken. 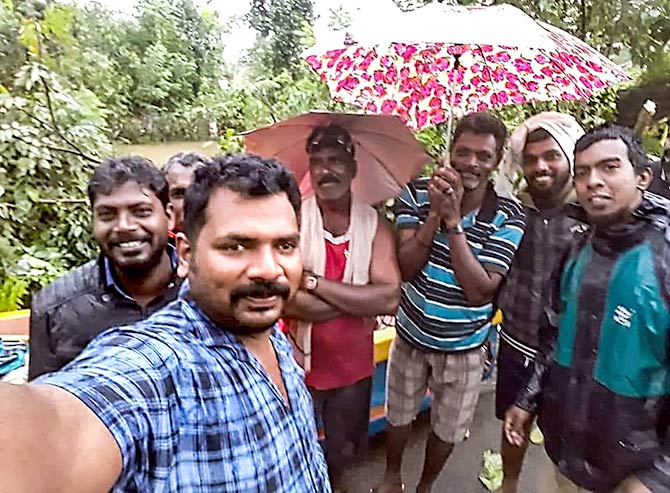 IMAGE: Jack Mandalo takes a selfie with other fishermen involved in the rescue

The entire rescue operation was very dangerous, and something we have not experienced before. It was different from what we experience on the seas.

Till we came back, we didn't know what a major mission it was.

We were just doing what we had to do at that time. There was no time to think or look back.

Only when we read about it later did we realise the magnanimity of the situation.

We are happy that the people appreciated our work. We are happier when the chief minister described us as the Coastal Army!