Most of the migrants don't get access to any medical facilities in government-run hospitals or dispensaries as they do not have an Aadhaar card and are not Indian citizens.
Prakash Bhandari reports. 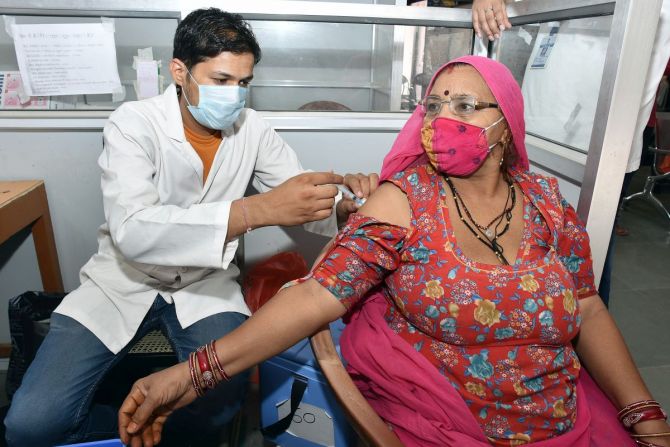 IMAGE: A woman gets a dose of the COVID-19 vaccine in Bikaner, May 29, 2021. Kindly note the image has only been posted for representational reasons. Photograph: ANI Photo

Over 20,000 Hindu migrants, who fled their homes in Pakistan's Sindh province after facing religious persecution, are a deprived and unprivileged lot in their new country, India.

These migrants belong to backward classes and are staying in India on a Long Term Visa (LTV); they are yet to get their Indian citizenship.

They are mostly living in Jodhpur in Rajasthan, but are also spread across the neighbouring districts of Pali, Jalore, Jaisalmer, Barmer, Bikaner and Udaipur.

During the first and the second phase of the pandemic, these migrants were turned away from various government-run hospitals and dispensaries and were refused vaccination because they do not have Aadhaar cards and are not Indian citizens.

Ten Pakistani Hindu migrants have died due to covid-like symptoms and lack of medical facilities in Jodhpur, although many have recovered as well.

The largest number of such migrants live in 20 different hutments and slums in the city. Without vaccination, they pose a great danger to others as they could become super spreaders.

"A large number of Hindu migrants left their homes and properties in Sindh because they were subjected to persecution and were unsafe. They came here with the hope of getting Indian citizenship under the new citizenship law," says Hindu Singh Sodha of the Lok Seemant Sangathan, an NGO working for their rights.

"But till they get it, they will not get the Aadhaar card and, without Aadhaar, they are like a burden on society," Sodha adds.

"It is necessary to vaccinate these migrants else they could become super spreaders of the disease," warns Sodha.

Sodha, a migrant himself, came to India as a young boy after the 1971 War. He acquired Indian citizenship and has been working for the cause of the migrants. He has written to the prime minister asking for vaccination for the migrants.

"We Pakistani migrants have travel documents. People have LTVs and permission to stay. Nomads, saints, the homeless, etc, are included in the notification issued by the Union ministry of health, but this most vulnerable group is left out!" says Hemaram Koli, who is also a migrant. Rajasthan's Chief Minister Ashok Gehlot has reassured the migrants that they will be vaccinated. However, the issue is linked with the central government as well.

After a public outcry on the conditions of the migrants, the medical and health department ordered a door-to-door survey in 24 slums in Jodhpur on May 5. However, in the absence of necessary documents such as the Aadhaar card, their route to vaccination continues to be blocked.

The Sangathan states that the community has largely remained excluded from the process of screening, testing and treatment for COVID-19.

"The problem of the migrants is a human problem and it should be addressed differently. Leaving 20,000 persons without vaccination would mean endangering the lives of those innocent people who would come in contact with these unvaccinated people and contract corona," says Bharatiya Janata Party MLA Suryakanta Vyas.

Sodha says their Pakistani passports and LTVs should be considered as valid documentation for the purpose of vaccination and they should be treated as "persons of special category".

In 2019, before the Lok Sabha election, Prime Minister Narendra Damodardas Modi had addressed a huge rally in the border district of Barmer where he had promised to mitigate the problems of Hindu migrants from Pakistan.

After the enactment of the Citizenship (Amendment) Act, the migrants hoped they would get citizenship and their identity crisis would end, but the pandemic has exacerbated their problems.

This issue has now been taken up in the high court. Justice Rameshwar Vyas and Justice Vijay Vyas observed that the Union government has issued orders regarding the standard operating procedure about the vaccination of those who have no prescribed identity cards. The court asked the Rajasthan government to let it know how such persons could be tested for COVID-19.

As the Union government's order is silent about the Pakistani migrants in its SOP, the state government will have to seek clarification from the Centre. Until the clarification is received, the uncertainty over vaccinating the migrants will continue.