Malaysian Prime Minister Dr Mahathir Mohamad is aware that Zakir Naik's extradition will be exploited by his political opponents who will portray him as a weak leader who betrayed the cause of Islam by surrendering Naik. In such circumstances, he cannot give them a rallying issue on a platter by extraditing Naik to India, says Asif Ullah Khan. 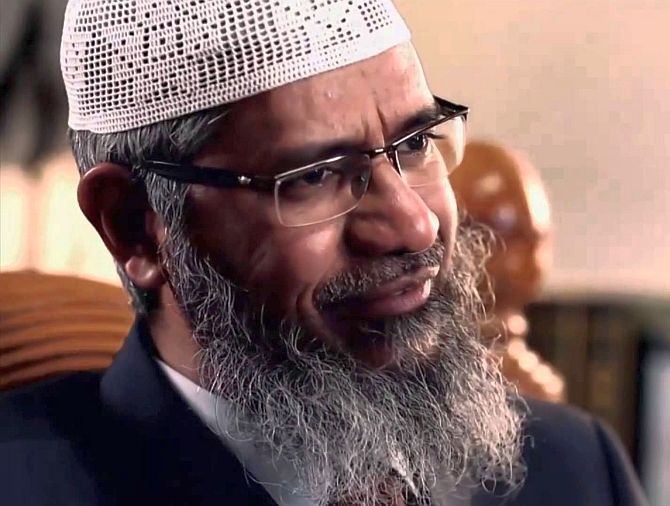 Naik, who is wanted in India in cases ranging from spreading hate speeches, money-laundering to terrorism, took refuge in Malaysia in 2017, where he was granted permanent resident status.

However, his controversial and offensive remarks about other religious communities created problems for the previous government of Najib Razak and now Dr Mahathir is facing the same issue.

Due to Naik's popularity among Malay Muslims, who constitute more than 70 per cent of the country's population, both former prime minister Najib Razak and his successor, Dr Mahathir, have used his popularity to bolster their support base among the community.

This is the reason why Dr Mahathir has even refused to extradite him to India desp ite the extradition treaty signed by the two countries in 2010.

But his coalition partner, the Democratic Action Party (DAP), has been very vocal against Naik's presence in Malaysia and on numerous occasions questioned the government's decision not to extradite him to India. However, Dr Mahathir had made it clear that he could stay in Malaysia if he does not violate any law.

However, the controversial preacher's recent utterances against Hindus and Chinese, who form a major chunk of Malaysia's population, have put him in the eye of a new storm, and calls for keeping him under a tight leash and extradition are getter louder.

During a religious talk in Kota Baru, Kelantan, on August 8, Naik responded to calls for his deportation by saying that the Malaysian Chinese should "go back" first as they were the "old guests" of the country.

Earlier, he had said Hindus in Malaysia were more loyal to Indian Prime Minister Narendra Modi than to Dr Mahathir.

Although Naik apologised for any misunderstandings over his statements, saying they have been taken out of context and fabricated, the damage was done and even Mahathir lost his patience when he said the controversial preacher has overstepped boundaries when he touched upon racial politics and stirred tensions in Malaysia.

Naik was called twice to federal police headquarters, where he was questioned for long hours and later inspector-general of police Abdul Hamid Bador said Naik has been banned from giving talks on all mediums, including social media.

Holding permanent residence status does not allow him to participate in politics, the Malaysian prime minister added.

However, the police ban and the apology failed to calm the storm stirred by Naik.

DAP legal bureau chairman Ramkarpal Singh said the apology does not change the fact he has breached his permanent residence conditions and it (apology) is an acknowledgement by him that his speeches have stirred racial unrest in multiracial Malaysia.

Anwar Ibrahim, who will succeed Dr Mahathir as prime minister, said the government will soon decide about Naik's presence in Malaysia.

Mohamed Tawfik, who is a former parliamentarian and son of former deputy prime minister Dr Ismail Abdul Rahman, says it was high time for the controversial preacher to be deported.

"The Islamophobia generated by his talks has come to a stage where all conservative Muslims are seen as possible terrorists and the distinction between conservatism and extremism is blurred," he added.

However, deporting Naik will not be easy for Dr Mahathir.

Arfa'eza Abdul Aziz, a senior Kuala Lumpur-based journalist, says: "The problem is that Dr Mahathir's Pakatan Harapan coalition government is seen by Malays as anti-Malay and anti-Islam because they feel it's controlled by the Democratic Action Party, which is dominated by Malaysian Chinese."

What gives more credence this view is that it's the DAP which is very vocal about Naik's extradition.

Penang deputy chief minister Ramasamy Palanisamy, a member of the DAP, has on numerous occasions questioned the government's decision not to extradite Naik to India.

Arfa'eza says Dr Mahathir may put a gag order on Naik but he cannot deport him because he is using this issue to restore the image of the government among the Malays,  who have accused it of not upholding Islam.

Arfa'eza too agrees with this view and says: "I think no Malaysian government will extradite him as he has a large following among Malays and, secondly, it will be seen as anti-Islam."

Naik's popularity in Malaysia can be gauged from the fact that in 2013 he was awarded the Tokoh Ma'al Hijrah Distinguished Personality International Award by the Malaysian king.

"I think Malay communities here have always been compassionate about fellow Muslims persecuted abroad or at their homes.

"So, it will be very difficult for Dr Mahathir to succumb to India's demand as his reputation is already not so good among the Malays. So, I am sure he will not agree with India," says Arfa'eza.

She says Malaysian governments always had non-Muslim coalition partners. Like Barisan Nasional had Malay Indian Congress and Malay Chinese Association but they rarely questioned and interfered in the issues involving Malays and Islam.

The case of Pakatan Harapan government led by Dr Mahathir is different as DAP politicians are playing a leading role in many issues involving Malays and Islam.

Such concerns were further heightened by the naming of an ethnic Chinese, Lim Guan Eng, as finance minister for the first time since 1974 and the appointment of a Catholic Indian, Tommy Thomas, as the attorney-general.

Recently, the Muslim community protested against DAP's non-Muslim leaders leading functions held in mosques to distribute zakat to Muslims. They question why should non-Muslim politicians take the lead in zakat distribution when they have nothing to do with it, Arfa'eza said.

She said: "Of course, it is not un-Islamic, but it was rarely done by MCA or MIC leaders when the Barisan Nasional government was in power."

"Zakir Naik is neither a terrorist nor has he been proven to have links to related (terrorist) networks.

"Zakir is an accomplished scholar whose expertise is in comparative religious study. He provides his debate according to facts," he added.

Many political analysts have already warned of dire consequences should Malaysia accede to India's request. Malaysia, being a Muslim country, will be seen as a country which failed to protect a fellow Muslim and an Islamic scholar.

"If we send him back, there will be a huge implication regarding the Muslim sentiments, domestically and internationally. It is something that needs to be ruminated, particularly in the interest of the majority," said Dr Ishak.

The Pan-Malaysian Islamic Party has already urged Dr Mahathir to ignore India's request, saying that the charges against Naik in India are aimed at "blocking his influence and efforts to spread religious awareness among the international community".

Most Malay Islamic organisations feel Naik's case is 'religious sensitive and he will never get a fair trial in India'.

Dr Ishak also contends that the rule of law should not be followed blindly at the expense of true justice.

"The rule of law is about fairness and justice. Will Zakir get a fair trial there? There are already concerns (that he will not). He is already being treated as if he is guilty. If we cannot see the forest for the trees, then there can be a miscarriage of justice on our part," he added.

This will not only trigger huge protests in the country but can also drastically alter the dynamics of domestic politics, he warned.

Arfa'eza says Dr Mahathir is very much aware of the fact that Zaik's extradition will be exploited by the United Malays National Organisation (UMNO) and PAS and he will be seen as a weak leader who betrayed the cause of Islam by surrendering Naik.

In such circumstances, he cannot give UMNO and PAS a rallying issue on a platter by extraditing Naik to India.

Dennis Ignatius, a former Malaysian diplomat, says Naik's case is not about the legalities of extradition but local politics and religious sentiment. Having taken careful measure of Malaysia's fractured political and religious landscape, Naik is skilfully playing off one segment of Malaysia's population against another to stave off extradition.

By conveniently insisting that he is a victim of religious persecution, he obliges local Muslims to come to his defence. It is a narrative that resonates all too well in Malaysia, Ignatius says, adding that the more local Hindus call for his deportation (based on his egregious and insulting comments about Hinduism), the more his support grows.

And having spent months building up an extensive network of political and religious connections across the country, his reputation is now such that he is virtually untouchable,  says Ignatius.