News
Business
Movies
Sports
Cricket
Get Ahead
Money Tips
Shopping
Sign in  |  Create a Rediffmail account
Rediff.com  » News » Why are judges' disputes coming out in the open?

'The dignity of the judiciary is going down.'
'There may be disputes and differences of opinion.'
'These are most confidential things. How can they come to the public domain?' Kalyan Banerjee, MP, asks the Lok Sabha. 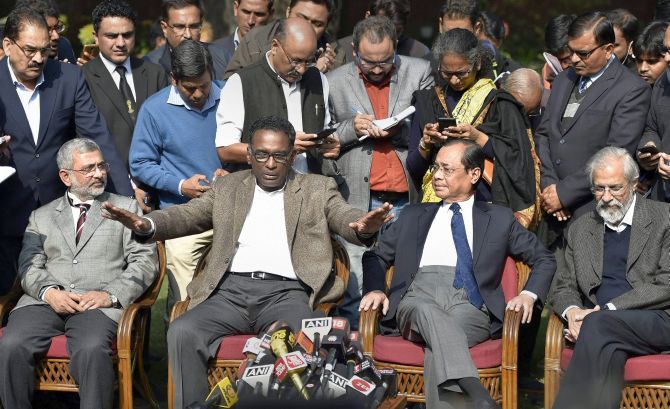 Today the disputes among the judges of the collegium come out in the open. They come to the public domain.

The dignity of the judiciary is going down. There may be disputes and differences of opinion. These are most confidential things. How can they come to the public domain?

They are sending letters. Is this something to be appreciated? Nobody can appreciate this. We are seeing this every day.

What is the procedure of selection of judges?

Sir, I will give you one instance. You will be surprised, but let the nation know it.

The name of one of the very eminent lawyers of the Calcutta high court was sent to the Collegium by the high court nearly two years back. The Collegium did not recommend his case.

What was the ground? The ground was that he is the nephew of an ex chief justice of the Allahabad high court. He is now the assistant advocate general of the state of West Bengal.

Now, the name of another lawyer who is also a very eminent and a very good lawyer -- I pray to God that he should become a judge -- has been recommended by the Calcutta high court to the Supreme Court and the Supreme Court has also recommended his name, who is the son of an ex-chief justice.

The nephew has been excluded because of his relationship, but the son's name has been approved.

Is it the ipse dixit of the Collegium?

Can it be done on the ipse dixit of the Collegium?

In another case, the name of one of the eminent counsels of the Calcutta high court was recommended, but ultimately the Collegium did not recommend his case because his grandfather was a Congressman.

Why is this discrimination? I cannot understand this.

If you want to take a stand based on the principle that nobody related to any political personality should be recommended for the post of a judge, I have no objection to that.

I have a strong objection to this kind of practice. This cannot be appreciated.

Sir, what is the procedure of selection of judges in this country?

I would like to ask whether the MoP (Memorandum of Procedure) has been finalised or not.

Why is there so much difference of opinion between the Supreme Court and the central government regarding finalisation of the MoP?

Now I will come to the most important point.

Who is responsible for the delay?

The Constitution has given the responsibility to us to make the laws.

The Constitution has given that responsibility to Parliament and state legislatures to make laws in this country. But what is happening today?

Under the garb of exercise of power under Article 142 of the Constitution of India, all principles and all guidelines are being... (Not recorded) is also legislating.

(Deputy Speaker: They are not only legislating, but... (Not recorded))

Yes, now it depends upon the perception of the judges. They are legislating according to their perception.

The argument was: 'These legislators are not that much educated that they can legislate the law.'

The House of Lords, ultimately said: 'You see, whether a legislator or a parliamentarian is educated or not educated is not his business, but his business is that he goes to the people of the country at the grass-roots level and he understands what is the requirement.'

Sitting in an air-conditioned chamber, sitting at big, big places one is thinking that 'this should be the perception'. No; that cannot be the law.

A perception cannot be made into a law through a judicial process.

Legislation should be left to Parliament.

Sir, looking at the way the thing is going on today about the legislation, it is my reading that not today or tomorrow, maybe after five years or 10 years or 15 years there would be direct conflict between the Parliament and the Judiciary unless this practice is stopped.

I would appeal to all the parliamentarians, irrespective of party lines, to come beyond party lines, and if necessary, let us go and make an application before the Supreme Court that in appropriate case, they cannot legislate the law.

Legislation is the responsibility of the Parliament.

Let us, all MPs, go and say that our functions cannot be taken away.

(Deputy Speaker: They can interpret the law; that is all. But they cannot legislate and execute. They are not the policymakers.)

Yes, they can interpret the law, but they cannot legislate the law.

What should be done? In what way you will work, how long you will remain, everything would be decided.

Unfortunately, the thing is that all politicians are bad to the Judiciary. All are bad!

They get some bad smells whenever a politician is there. Everyone is bad!

Day by day, we are entering into the field of this country and this conflict is coming up.

Unless it is stopped by the Judiciary immediately, after 10 year or 15 years -- whether I live up to that day or not, whether you live or not -- a day would be coming when there would be a direct conflict.

Then, what would happen to the country itself?

Let everyone discharge his own responsibility. Do not transgress the jurisdiction.

These are edited excerpts from a speech made by Kalyan Banerjee, the Lok Sabha Mp from Sreerampur, on the High Court and the Supreme Court Judges (Salaries and Conditions of Service) Amendment Bill, 2017 in the Lok Sabha, January 4, 2018.

DON'T MISS the features on the Judges Controversy in the RELATED LINKS alongside.