'The Congress will not make a difference in the life of a Patel, but only to teach the BJP a lesson we will vote against it.' 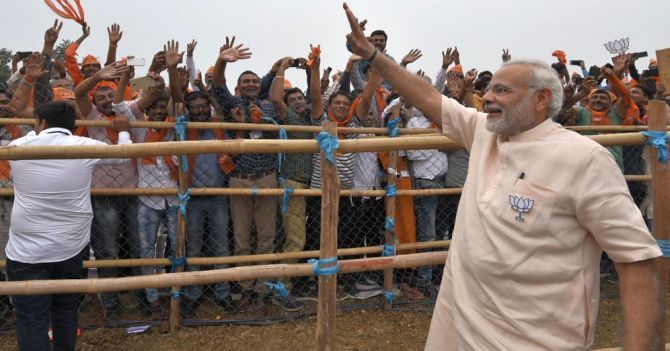 IMAGE: The BJP has made the mistake of thinking that the BJP and Modi are the same. Gujarat loves Modi, but the same can't be said of the BJP, says Jigar Patel. Photograph: Kind courtesy @narendramodi/Twitter

In 2014 when Narendra D Modi was elected prime minister of India, Jigar Patel, an engineer, was elated. He believed in Modi's promise of more jobs, better governance and 'achche din'.

of late, the engineer, who is in his mid-30s, is unhappy with the PM.

He tells Rediff.com's Syed Firdaus Ashraf why this Gujarat election is all about teaching the BJP a lesson.

Two years ago everything happened all of a sudden for me. My surname 'Patel' was suddenly splashed on the front pages of newspapers and hogged headlines everywhere.

This change occurred when Hardik Patel began his agitation seeking reservation for Patels in education and government jobs.

The demand was justified because we, as Patels, had always supported the BJP. Therefore, we felt this party would not betray us in our demands.

Unfortunately, as events unfolded I realised that the BJP was not doing justice to Patels.

During the agitation, 14 Patels died in police firing. No action was taken against the policemen. The only action taken by the BJP then was against then chief minister Anandiben Patel who many believe was pressured into resigning her post.

Two years have passed and I am still to see any action being taken against the policemen. Now, I believe the BJP has taken the Patel vote for granted.

The Patel community stood by the BJP like a rock, but have only been getting empty promises from them.

I am not voting for the BJP. My vote will go to anyone who is opposing the BJP, not necessarily the Congress party.

The BJP has made the mistake of thinking that Modi and the BJP are the same. The people of Gujarat love Modi, not the BJP.

In case Modi forms a new party, the people of Gujarat will vote for him. But the same can't be said for the BJP.

This time, if you notice, all the Patels are saying that they will vote for the Congress to defeat the BJP as this party has done injustice to the Patels.

The condition of Patel farmers has been the same for the past five years. Despite big talk about the Gujarat model of development, these people have seen no improvement in their lives. 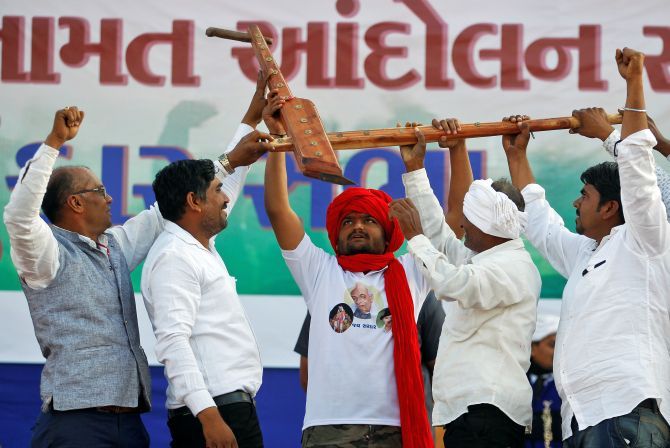 IMAGE: 'The Patel, who was a powerful entity in the village, is today powerless.'
Hardik Patel, the face of the Patel agitation, at an election rally. Photograph: Amit Dave/Reuters

The entire Gujarat development model has been concentrated on constructing big highways and not on creating jobs.

And before someone talks of the development that the state witnessed under Modi's regime in Gujarat, all of it was restricted to big cities such as Ahmedabad, Surat and Rajkot.

Even a city like Vadodara only saw development when Modi became prime minister in 2014.

Villages in Gujarat are completely untouched by the 'development model'. There is a crisis of jobs among the rural youth.

Youngsters in rural Gujarat have moved away from villages to the big cities and are jobless or are doing odd jobs.

There is no stability of income for the youth of rural Gujarat.

There is sufficient water and electricity for farming, but crop-related issues are yet to be solved by the BJP. The government has failed miserably in trying to control the prices of seeds and pesticides.

And to make the situation even worse for farmers is the fact that the middlemen reap all the profits, leaving nothing for the farmers. It was only in 2016 that the BJP started providing a minimum support price to farmers.

The Patel farmers in Gujarat face huge burdens of debt. For instance, the compound wall of my neighbour's house in my village collapsed three years ago. However, he is unable to repair it as he has no money.

Modi should have solved these problems, but he and his government in the state continue to ignore the plight of the farmers.

The Patel, who was a powerful entity in the village, is today powerless.

When it comes to education too, the Patels are not receiving any benefits.

Even after securing more than 90 per cent in schools, they are unable to get into colleges of their choice.

Ten years ago, I secured 70 per cent, but I did not get computer engineering though I stayed in south Gujarat. I had to go to north Gujarat to do my engineering.

This was not the case for my other friends who had OBC (other backward class) certificates. They got admission in south Gujarat whereas I had to travel to north Gujarat.

The Congress will not make a difference in the life of a Patel, but only to teach the BJP a lesson we will vote against it.