'We want the Commission to finish its work; the issue it is investigating is too crucial for its work to be left incomplete.'
Jyoti Punwani reports. 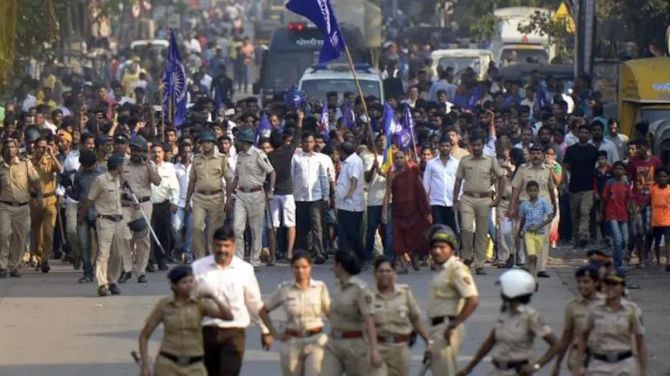 Once again, the Maharashtra government has shown how little the judicial commission set up to investigate the Bhima Koregaon violence matters to it.

The government announced on October 6 the final extension to the Commission, asking it to submit its report by December 31, 2020. The Commission's hearings began exactly two years ago, on September 5, 2018.

The government knows meeting this deadline is an impossible task.

On February this year, the Commission had told the government it would need at least six months to complete its work, as reported by Rediff.com.

After the March 24 lockdown was announced, no hearings have been held.

The two-member commission headed by retired Justice J N Patel, was set up to investigate the violence that broke out at Bhima Koregaon on January 1, 2018, the 200th anniversary of the historic battle between the British and the Peshwas, which the British won with the help of Mahar soldiers.

The violence claimed one life and enormous loss of property. 48 people were injured. A state-wide protest bandh called by Dalit groups on January 3 also saw violence.

News of the December 31, 2020 deadline was met with dismay by all those associated with the Commission.

The Commission, which has not been given premises of its own, functions from the office of the State Information Commission. State Chief Information Officer Sumit Mullick is the second member of the Commission.

The hearings are held in a small room in the office, which can barely accommodate 15 persons, excluding the two Commission members, the stenographer, and the witness.

With counsel for the Commission, the government, various Dalit victims and the Vivek Vichar Manch (a Hindutva think-tank and a party before the Commission) attending every hearing, junior lawyers and journalists have often had to stand due to lack of space.

Counsel for the government and police, Shishir Hiray, who lives in Malegaon, told Rediff.com: "I will, of course ,attend the hearings wherever they are held, even at risk to my health, as any Covid warrior would."

However, others were not willing to do so.

Across the board, Commission staffers and counsel are convinced that the present venue is too risky.

"If the hearings are held there, we will all be affected by COVID-19 within the first two days," said Advocate Kiran Channe, representing two Dalit victims of the violence at Bhima Koregaon, Ravindra Chandane and Amol Wankhede.

"Horrible thought!" were the words used by Vivek Vichar Manch Counsel Vijay Sawant when asked about hearings continuing at the present venue. Sawant lives in Pune. 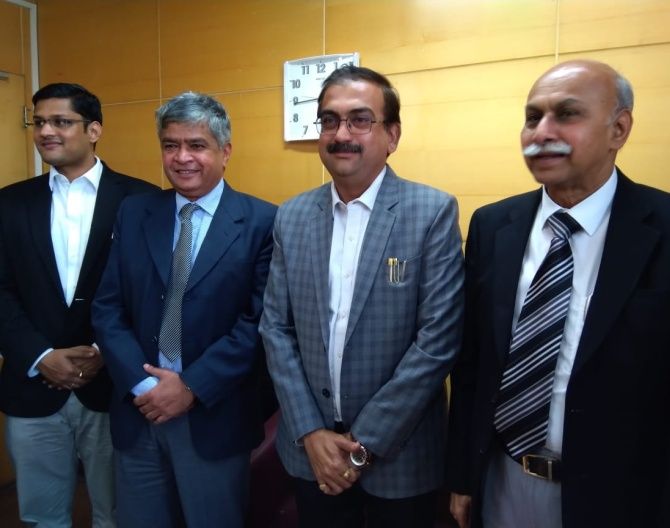 The State Information Commission's office is in the New Administrative Building, opposite Mantralaya in south Mumbai.

Apart from them, the Commission's staffers, such as its Superintendent Govind Dingankar, also live in far-off suburbs. Additionally, said V V Palnitkar, secretary to the Commission, except for the stenographer and advocate Satpute, everyone working for the Commission is over 60.

Palnitkar also pointed out that witnesses may find it difficult to travel to Mumbai.

30-odd witnesses have still to depose. While most of them are policemen and bureaucrats, who would have government transport, there are still crucial testimonies awaited from public witnesses.

Among these is Rajendra Gaekwad, descendant of Govind Gopal Gaekwad, the Mahar who is said to have conducted the last rites of Chhatrapati Sambhaji Maharaj in 1689. The Maratha ruler was killed by Mughal emperor Aurangzeb, with a warning that no one should carry out his last rites.

The Marathas, however, claim that it was not Gaekwad, but a Maratha surnamed Shevale who defied Aurangzeb's diktat and cremated Sambhaji Maharaj.

This disputed history led to clashes at Vadhu Budruk, the village not far from Bhima Koregaon where the samadhis of both Sambhaji Maharaj and Govind Gopal Gaekwad are located. Dalits who go to Bhima Koregaon every year on January 1, 2018, also pay their respects at these samadhis.

This disputed history and these clashes have been a recurring theme during the Commission's hearings. Rajendra Gaekwad's testimony therefore is important.

"We want the Commission to finish its work; the issue it is investigating is too crucial for its work to be left incomplete," said Advocate Channe. "We also know that now, we have to live with COVID-19. Witnesses will willingly come to depose because now the fear of Covid is disappearing."

But this could only be possible if the government alloted a suitable venue where social distancing was possible, said Channe. Lodging and boarding arrangements for the staff also would have to be provided, he added.

Palnitkar said they had written to the government requesting it to keep the notification in abeyance till December and take a decision keeping the Covid situation in mind. 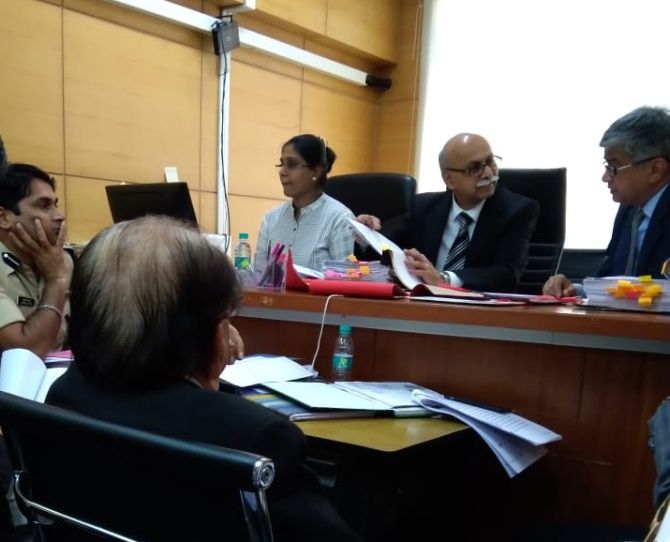 This is the seventh extension to the Commission. Incidentally, the last extension granted to it on February 11 for two months, was also described as the final extension by the government.

Meanwhile, even as the Commission has been hearing testimonies of those injured in the Bhima Koregaon violence, arrests of intellectuals, lawyers and activists for the same violence have been continuing.

Early this month, three artists of the Kabir Kala Manch were arrested, bring the total number of arrests to 15.

The 15 arrests follow a conspiracy theory propounded first by the previous BJP government, which links the violence on January 1 to the Elgar Parishad held in Pune on December 31.

However, witnesses to and victims of the violence have not mentioned the Elgar Parishad. Most of them have recounted that Dalits on their way to Bhima Koregaon were attacked by mobs carrying saffron flags.