Kapil Mishra had been invited because he was an "anti-corruption crusader", one 'IIT B for Bharat' organiser said.
But in his half hour-long speech, Mishra didn't mention corruption.
His entire focus was on the long "battle" Hindus had fought for their identity. 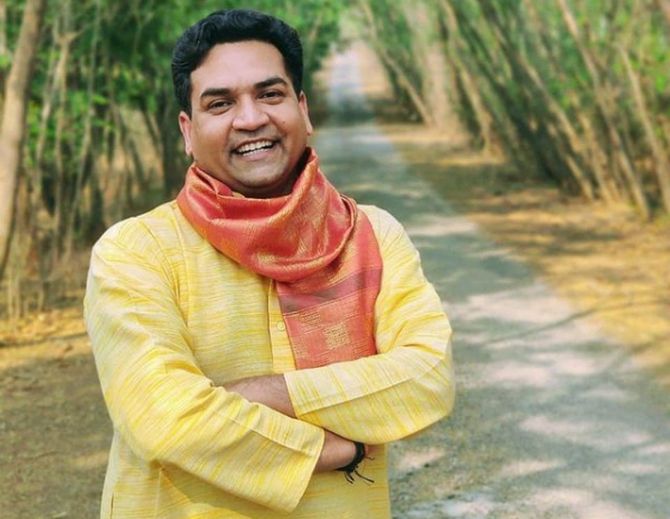 Did Kapil Mishra's record as a communal rabble rouser qualify him to address a group of IIT-Bombay students on Sunday, May 23, on 'Challenges to Indian culture & role of educated youth in national renaissance'?

The group that invited him, 'IIT B for Bharat', claimed ignorance of his record.

Mishra -- who joined the Bharatiya Janata after being expelled from the Aam Aadmi Party -- had, in December 2019, coined the notorious slogan used against anti-CAA-NRC protesters: 'Desh ke gaddaron ko/Goli maaro saalon ko.'

On February 23, 2020, Mishra also threatened the Delhi police that if they didn't clear an anti-CAA-NRC protest from Jaffrabad within three days, he and his supporters would not listen even to the police and would take to the streets.

Communal violence in the area erupted the very next day. 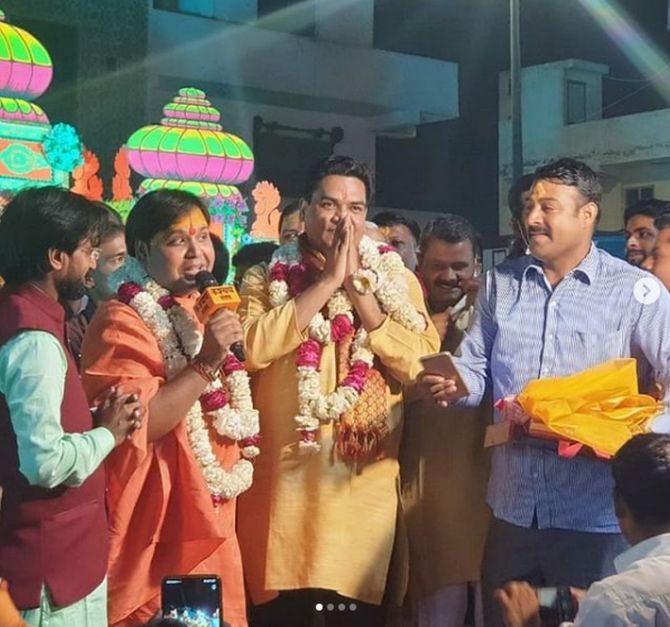 The spokesman for 'IIT B for Bharat' told Rediff.com Senior Contributor Jyoti Punwani that he was not aware of this background of Mishra.

"My Hindi is not that good," he said, adding, "I would not like to be judgmental."

According to this PhD student, who requested that he not be named, Mishra had been invited because he was an "anti-corruption crusader".

However, in his half hour-long speech on May 23, uploaded on You Tube by 'IIT B for Bharat', Mishra didn't mention corruption.

His entire focus was on the long "battle" Hindus had fought for their identity.

Elaborating on the Hindutva theory of 'Hindus in danger', Mishra described the Nehruvian model of education adopted after 'so-called Independence', more responsible for inculcating an 'inferiority complex' in Hindus towards their religion and culture, than even the rule of 'Muslims' and the British. That was because Nehru had 'handed over' education and all cultural institutions to the Communists, said Mishra.

The challenge before the youth was to break free from this 'poisonous hold' and assert their Hindu identity, a process which had already begun, according to Mishra. With that aim, he had started his organisation called 'Hindu Eco System', and had seen the energy of the youth who joined it.

Mishra's Zoom lecture began with a Sanskrit shloka recited by a member of 'IIT B for Bharat', who chose the famous shloka from the Bhagvad Gita: Yada Yada hi Dharmasya as the one that described the group best.

In the shloka, Lord Krishna says that he reincarnates himself from age to age whenever there is a downfall of dharma, for the protection of the good and the destruction of the wicked.

Interestingly, 'IIT B For Bharat' was born last year as a counter to the campaign against the CAA-NRC organised on and off campus by the newly formed group 'IIT Bombay for Justice'.

"We didn't want the impression to gain ground that 'IIT Bombay for Justice' represented all IIT students. My father's colleagues, for example, started asking me why IIT was anti-CAA," said the spokesman.

So 'IIT B for Bharat' held pro-CAA rallies, and a 'Tiranga March' on the eve of Republic Day, where students marched on campus under a 1,000-foot long flag.

The group claimed, ironically, that the march was in support of the call given a few days earlier by the IIT director, that students should express their political views only outside campus without using the Institute's name.

The next day, Republic Day, 'IIT Bombay for Justice' held a rally and cultural programme called 'Reclaim the Republic'. 'IIT B for Bharat', said the spokesman, stands for Sanatan Dharma, of which cow protection was one of the defining features. While they believed that 33 crore deities resided in the cow, the group did not support the lynching of Muslims by gau-rakshaks, on suspicion that they were trading in cows, said the spokesman, a PhD scholar in the Institute's Energy Department.

Compassion is a defining characteristic of Sanatan Dharma, he continued, pointing out that India had always welcomed refugees from everywhere. However, taking demographics into consideration, his group supported the CAA, which is selectively compassionate, excluding Muslim victims of persecution from neighbouring countries from being given Indian citizenship.

But his group respected all Gods, said the student, and believed in Gandhi's concept of Ishwar Allah Tero Naam. He personally had "many Muslim friends and we eat at each other's homes."

'IIT B for Bharat' holds study circles on India's ancient knowledge systems, accepting only what could be scientifically proven, said the spokesman. Thus it didn't endorse the claims made in 'Vimana Shastra' that advanced aerodynamic flying vehicles existed in ancient India.

The group also advocated the study of knowledge systems of other ancient cultures such as Egypt.

In the last month, the group organised four online lectures, on What is dharm, Relevance of studying Ramayana, Journey of complete Yog, and the Influence of debased Western culture on student life.

However, while the spokesman claimed ignorance of Kapil Mishra's background, students who had tuned in to Mishra's Zoom talk seemed fully aware of it, even referring to the epithet 'dangai' (rioter) that was applied to Mishra for his speech just before the Delhi riots.

Mishra said proudly that he wore that epithet like a "medal on my chest".

Questions to Mishra by students centred around the theme of Hinduism in danger, and the difficulties in convincing fellow students of this danger. One student expressed disappointment that even the BJP was not taking decisive action to save Hindus, say in Bengal.

Mishra was quick to assert that the current political leadership was on the right track, acting "slowly but with finality". He gave the examples of Article 370 and the Centre's handling of the Delhi riots. "Have faith," he advised the doubting Thomas.

However, one student asked two questions that were aimed at Narendra Modi.

You tell us to reject the "inferiority complex" bred into us for years, he told Mishra. But wasn't it a sign of inferiority to give credit for every achievement to just one individual?

The second question he said, related to the "double standards" that tolerated wrongdoing by certain people. When the person who gave the slogan: 'Do gaz ki doori/Mask zaruri (six feet distance; mask necessary)' was himself flouting it, shouldn't he be called out?

Mishra answered the first question by saying that Hindu society had still to project a genuine hero. In fact, all the villains of history were being projected as heroes. When the real protectors of Hindu religion and society would be projected as heroes, Hindus would have to stand by them.

He left the second question unanswered.

Since Narendra Modi became PM in 2014, IIT-Bombay has seen a range of pro-Hindutva activities, including a talk at the 2015 Indian Science Congress on the Vimana Shastra; another in 2016 by the anti-Muslim Pakistani-Canadian journalist Tarek Fatah; a 2016 workshop on the Vedas, which had to be shifted to a temple after opposition from faculty and students.

Parallel to this has been the growth of student organisations that oppose Hindutva such as the Ambedkar Phule Periyar Study Circle and 'IIT Bombay for Justice'. These groups were active in showing solidarity to protesting students of JNU, Jamia and AMU and against the CAA-NRC, in late 2019, and have been fighting for the full implementation of the reservation policy in IIT.

In January 2020, the IIT administration sent out a circular asking hostelites not to participate in 'anti-national, anti-social and undesirable' activities, and prohibiting leaflets, posters, speeches, plays or music that 'disrupt the peace of the hostel environment, without the permission of the hostel council or the Dean of Student Affairs'.

However, as the Kapil Mishra talk reveals, the circular has been ignored by both kinds of student bodies, pro and anti Hindutva.

Interestingly, it was Kapil Mishra who tweeted the details of his talk; not 'IIT B for Bharat'. In fact, 'IIT B for Bharat's Facebook page, started only in March this year, which listed the names of its admins but didn't allow access to non-members, disappeared the day after the group's spokesman spoke to Rediff.com. The group's self-introduction on You Tube has also disappeared.

It's worth stressing here that PhD students -- 58% of the student population -- form the bulk of members of the political organisations active on campus. Undergraduates, who form 41%, just don't have the time.

Hence, while the ideological battle within IIT-Bombay is being closely contested, to what extent will it affect the Institute's ambience?