The 3,000-strong force, plus its highly trained dog squad, is responsible solely for the protection of one person: Prime Minister Narendra Damodardas Modi.
Veenu Sandhu and Shubhomoy Sikdar report. They are licensed to kill and prepared to die, but members of the uber elite and most coveted security force in the country prefer to avoid the limelight and lurk in the shadows anonymously.

Secrecy and stoicism are essentials in this job, but the recent controversy over a security downgrade to members of the Gandhi family -- Sonia, Rahul and Priyanka -- has put the focus on the Special Protection Group.

Beyond the trademark impenetrably dark glasses with inbuilt communication devices, crisp business suits, sophisticated weapons, cat-like alertness and agile moves, we know very little of the SPG -- what it does and what it takes to do what it does.

The officers come from the Indian Police Service or RPFS.

They are all volunteers -- the best of the best, who have made the cut after a rigorous, three-tier screening process.

Stage one involves intense grilling by a board of officers.

"At this stage, it is not unusual to discreetly run three levels of background security checks on the personnel -- verification of the closest family, distant relatives and friends," says a retired officer who does not wish to be named. (Those who have served in the force, including retired officers, contacted for this article requested anonymity.)

While the eligibility criteria lay down certain conditions like peak fitness (termed Shape 1 in the force's parlance), the real test starts when one appears for the advanced screening processes where physical and psychometric tests are conducted, explain two former SPG personnel from the same parent force (name of the force withheld since the two men are still serving).

For the initial three months, the personnel are trained in armed and unarmed combat, and marksmanship.

'One bullet, one man' -- that's the expected level of precision across different types of weapons.

So is knowledge of all kinds of explosives and explosive devices, their lethality and the ways to neutralise them.

Zero-error is the name of the game. Defensive driving -- to safely extricate the protectee from a vulnerable situation -- is part of the training, which includes yoga, meditation and mental exercises to help keep the mind focused.

"They can fire from a moving vehicle with precision or pick a headshot in a crowd without injuring anybody other than the target," says Danvir Singh, former commanding officer, 9 Sikh Light Infantry, and associate editor, Indian Defence Review, adding that they also need to be ace swimmers and well versed in the use of state-of-the-art communication devices.

This is a force that is expected to be tireless -- physically and mentally.

For instance, right after a timed 40 to 60 km speed march (practically a run) carrying 22 kg of weight, they could be put through a tough, timed obstacle course and immediately afterward expected to locate and shoot a specific target from among a bunch of targets.

"The training hours are long and intense," says Singh.

Only then do they qualify to bodyguard the protectee, which is their primary job -- to provide 'proximate' security, using their body as armour, if need be.

"The physical tests and training are gruelling, but the main manslayers are the psychological tests," says a serving IPS officer who was on deputation to the SPG for several years.

"Like, execution of complex tasks that require attention and fine motor coordination when exhausted and sleep deprived, such as recognising, remembering and reproducing information in the correct order."

The training also prepares them for real-life situations through enactment or simulation -- say, a protected leader being attacked or facing a sudden health emergency like a cardiac arrest in a crowded place, or someone breaking the security cordon and shaking hands.

"What is tested is not just their response but also their restraint," says a former SPG commando. 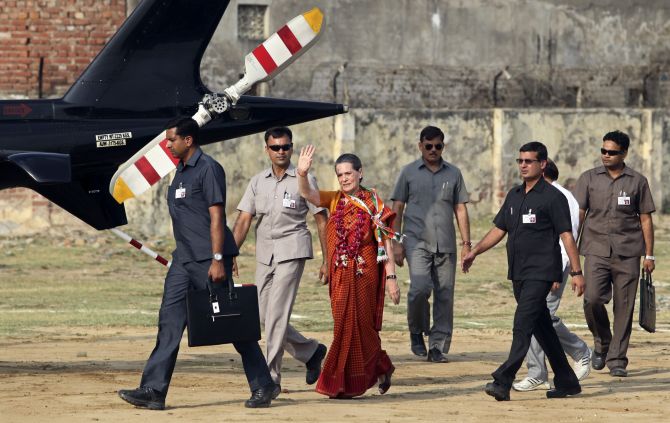 The only instance of SPG men firing at someone was recorded nearly two decades ago, on January 25, 2000, when a group of college students forcibly entered the compartment of a train in which former prime minister Chandra Shekhar was travelling.

The train had halted at Sadat station in Uttar Pradesh's Ghazipur district.

As a scuffle broke out when the security personnel tried to evict them, the SPG fired at the group, killing one student and injuring another.

That was a rare incident in the history of the force which is sensitised to pick up unusual behaviour and obviate any kind of suspicion and doubt (shak aur shanka).

"A person might appear unnaturally nervous or excited simply because of being near the VIP. The SPG is trained to distinguish such a person from an assailant," says Singh.

But if someone gets too close for the SPG's comfort, it's not unusual for them to harmlessly elbow the person back.

That 'polite' nudge from a rock-solid commando can leave the person nursing a painful bruise for weeks.

A question asked out of curiosity can also invite cross-examination.

A journalist who visited Atal Bihari Vajpayee at his holiday home in the picturesque Prini village in Manali, Himachal Pradesh, years ago recalls being questioned for over an hour when he asked them about the nature of the weapon in the briefcase they are always seen carrying when accompanying a protectee.

"The briefcase, which has an MP5 gun inside, also serves as a bullet-proof foldout shield to cover the protectee in case of an attack. Its handle has the gun's trigger," says Singh.

Vajpayee, incidentally, had SPG protection till his death last year.

"When the SPG was set up, it was trained according to US secret service guidelines," says the retired officer mentioned earlier.

"Now, lessons from Israel are also being employed," he adds.

"The Israeli close combat system, Krav Maga, gives its members an edge over others who either practise with different systems or an imitation Krav Maga," says the IPS officer.

"The Human Performance Centre (a state-of-the-art gym) is one such example. No other organisation in India at least, government or private, can boast of such a collection of resistance training equipment," says the officer.

The SPG did not respond to an e-mail request to visit the facility or interview the director for this article.

There is no dearth of ammunition available to the SPG, says Singh, and the sharpshooters are expected to fire a certain number of rounds every day from different kinds of weapons.

They are also put through annual tests.

Those who fail are stood down and given a period to qualify, failing which they are repatriated to their parent force. 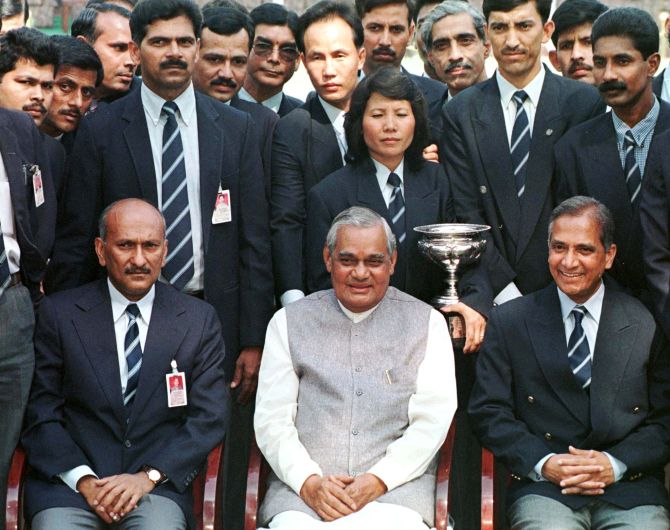 IMAGE: Then prime minister Atal Bihari Vajpayee with members of the SPG on the occasion of the group's raising day in New Delhi, April 8, 1999. Photograph: Kamal Kishore/Reuters

Apart from the topnotch arms, equipment and vehicles at its disposal, the SPG stands apart for the clout it enjoys when it comes to combing the area the protectee is to visit and dominating every spot from where it feels an adversary can strike.

It's a manpower-intensive job.

"You only see a fraction of their presence around the protectee," says Singh.

"They are there among the crowd, on top of buildings or in the trees -- doing whatever it takes, trained as they are to put themselves in harm's way to protect the person."

Despite the challenges, there are substantial perks to be had.

An SPG personnel draws 50% more than his salary in the parent force.

"And he gets to stay with his family on the SPG campus in Dwarka throughout the tenure (six years at the minimum, if he keeps passing the annual tests)," says a former SPG commando.

"Subsidised accommodation in Delhi means more exposure and opportunities for their children too."

Some former SPG personnel spoken to alleged that members of some communities are, however, not inducted into the force.

In 2014, Gurugram resident Aseem Takyar had filed a Right to Information application seeking to know whether the SPG recruits people from only a certain community or religion.

The Central Information Commission rejected his application on the grounds that the RTI Act does not apply to the SPG, except in cases of alleged human rights violation and/or corruption.

SPG personnel, while they put their lives at risk, also expect the protectee to cooperate with them.

"The protectee is briefed that in case something happens, he has to make himself into a very small target -- that is, sit down and cover the head," says the retired officer.

But "many a time, the situation gets the better of these public figures and they engage with people more closely than an SPG protectee should. Or they change travel plans. This leaves everyone vulnerable. We are not always comfortable with these changes," says a former SPG commando.

Home Minister Amit Anilchandra Shah used this argument more than once in Parliament during the debate on the SPG (Amendment) Bill in the context of the Gandhi family whose security has been downgraded to Z+ category.

"The commandos who are part of Z+ security are also very good," says a retired officer.

"But are they as good as the SPG? Who are we kidding?" 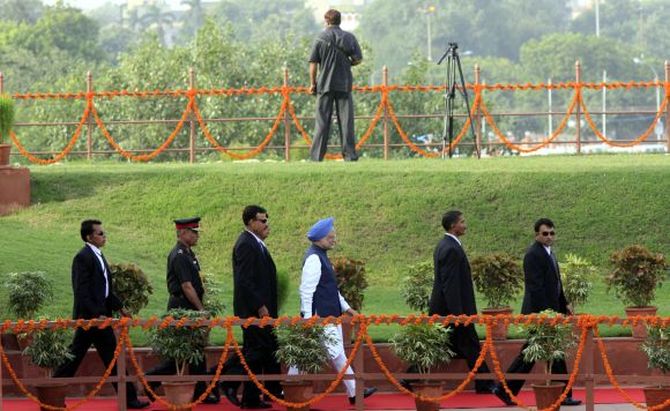 The SPG was raised in 1985 after then prime minister Indira Gandhi was shot dead by her bodyguards.

Its sole mandate was the prime minister's security.

On June 2, 1988, it got legislative backing through the Special Protection Group Act.

Rajiv Gandhi's assassination in 1991 led to the SPG Act being amended to provide security to all former prime ministers and their immediate families for 10 years after demitting office.

The last amendment, in 2003, entitled all former prime ministers and their immediate family to SPG cover for at least one year after demitting office and thereafter based on the threat perception assessed annually by the central government.

The Gandhis had been SPG protectees since Rajiv Gandhi's assassination.

The amendment passed by the Lok Sabha states that the SPG will provide security only to the prime minister of the day and the immediate family members residing with him.

Former prime ministers and their immediate family living with them at the allotted residences for five years since demitting office will also be eligible.

In the current scenario, this means that the 3,000-strong force, plus its highly trained dog squad, will be responsible solely for the protection of one person: Prime Minister Narendra Damodardas Modi.

The Special Rangers Group, a wing of the National Security Guard, provides Z+ security, which includes 55 personnel (at least 10 of them NSG commandos).

A private individual can be granted Z-security after a threat assessment.

Reliance Industries Chairman Mukesh Ambani is among those who enjoy Z-security. In 2013, the Z-security cover cost him Rs 15 lakh to Rs 16 lakh (Rs 1.5 million to Rs 1.6 million) a month. His wife Nita Ambani has Y-category security (11 personnel, including a couple of commandos).