Ramdhari Singh Dinkar's poems speak to every Indian, uniting them across political, social, religious and caste divides.
They elevate; they inspire; they stir the soul and goose-bump the flesh. 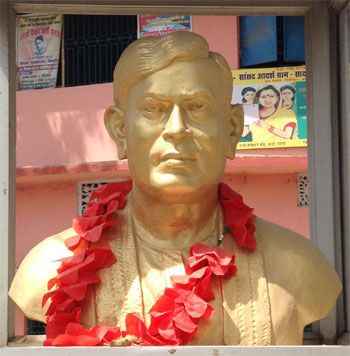 Archana Masih/Rediff.com stopped by at his native village in Simaria, Bihar, and realised that Dinkar's poems still lead the way, showing us where we need to go as a nation. 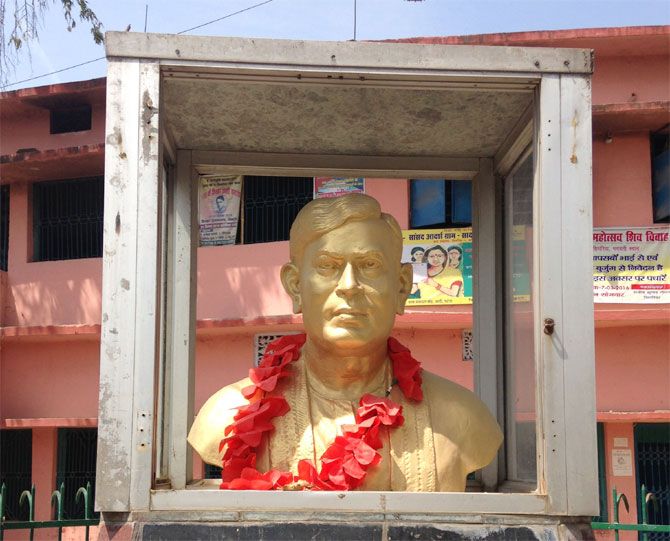 IMAGE: A bust of National Poet Ramdhari Singh Dinkar in his native village, Simaria in Bihar. In the background is a government school. Photographs: Archana Masih/Rediff.com

To find a 'Rashtriya Kavi' (National Poet), one has to travel down a narrow, patch-worked road that sadly has no signboards to indicate his birthplace.

It is a quiet, lonely stretch where semal (cotton) trees with flaming red flowers lie scattered around quiet fields.

"This place is so quiet. You can hear the leaves rustle. I can imagine him writing poems surrounded by this peace," says my mother, reminiscing about Rashmirathi, the epic poem and a classic of Hindi literature she had read in school.

My mother is 70. The fact that a poem she read nearly five-and-half decades ago still moved her is testament to the genius of Ramdhari Singh Dinkar, one of the country's most important and influential poets. 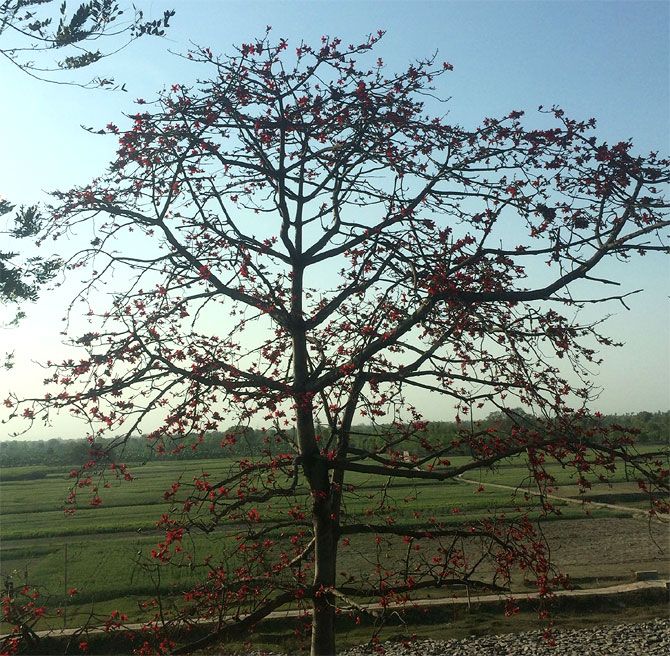 Dinkar's revolutionary verse can arouse a dead soul. Pick up his poems -- if you haven't -- and you will know.

The thundering lines from Singhason khali karo ki janta aati hai (Vacate the throne, for the people are coming) were used by Jayaprakash Narayan to warn Indira Gandhi from the Ramlila ground in New Delhi. That night in 1975, she suspended individual freedoms and imposed a 17-month state of Emergency in the country.

Read Singhasan khali karo written in 1956 and the lines about entrusting power in the hands of the people -- the anointment of the public and not the king on the throne of democracy -- will make your hair stand on end.

'Give way, listen to the stride or sound of chariots,
Vacate the throne, for the people are coming.'

Read Kisko naman karo mein Bharat and you find in those lines the Bharat all of us aspire for.

Sanskriti ke Char Adhyay tells us that India's strength lies in its composite culture. The book has an introduction by Nehru in which he writes: 'No one community in India can claim monopoly over its heart and philosophy. Whatever is there in India, every Indian has contributed to its creation. If we don't understand this fundamental fact, we will fail in understanding India.'

Among his many works, Dinkar also wrote a biography of Jawaharlal Nehru, Lokdev Nehru. 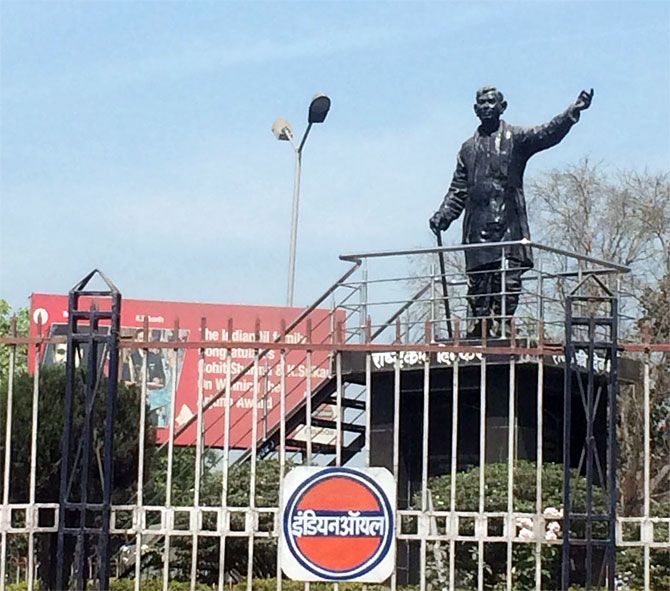 IMAGE: A statue of Dinkar on the outskirts of Begusarai, the district headquarters.

Dinkar's verse evoked nationalism. His poems gave voice to India as it fought for Independence, it showed the path to its leaders as they set about building a new nation and continues to tell us how far we have to go to fulfill the tenets of a democracy.

On his 100th birth anniversary in 2008, his statute was unveiled in Parliament where he served two terms as a member of the Rajya Sabha.

Last year, a function was held by the Narendra Modi government to commemorate the 50th anniversary of two of his works. Since the two works had completed their golden jubilees a few years earlier, the event raised eyebrows for its timing just as the Bihar election got underway.

Dinkar, of course, was the son of Bihar. The village of Simaria where he was born into a poor farmer's family in 1908 is near Begusarai, 100 odd kilometres from Patna.

Last week, Jawaharlal University Student Union President Kanhaiya Kumar, who hails from the neighbouring village of Bihat, had garlanded Dinkar's statute on his first homecoming after release from Tihar jail. Kanhaiya was arrested on charges of sedition for allegedly raising anti-India slogans which he denied and was later released on bail in March.

It was reported that ABVP students washed Dinkar's statue with Ganga Jal after Kanhaiya garlanded it. The poet's relatives in Simaria and Patna said they hadn't heard this piece of news.

His grandson in Patna, Arvind Singh says, "Dinkar was the nation's poet. I haven't heard about the Kanhaiya Kumar incident. Dinkar belongs to all Indians." 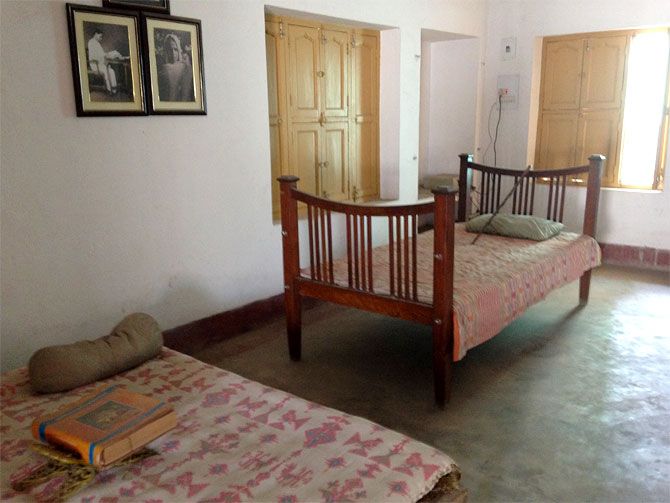 IMAGE: The poet's bed and walking stick in the museum dedicated to him in Simaria.

That Bihar Tourism has not invested much thought in promoting the poet's native village and provide better road infrastructure is a reflection of India's disregard for preserving literary heritage.

After asking a few passersby where his home is located, Simaria welcomes you with a bust of Dinkar, a garland of synthetic flowers around his neck. Under the statue is a list of 11 names present at the inauguration. The names overpopulate the black granite.

"He was truly a great poet. He travelled the corners of this country but would find time to write late into the night. Rashmirathi is my favourite. I could recite the whole poem, but now age has dimmed my memory," says 75-year-old Naresh Prasad Singh, the poet's nephew, whose brother Ramanuj Prasad Singh was the well-known Hindi news reader for All India Radio.

"Dinkarji had a very good voice and it was wonderful to hear him recite his poems. He also had beautiful handwriting and was very well read. Almost all the books he read had notes written on the edges that he would make," continues Mr Naresh Prasad Singh, whose other favourite Dinkar poem is the one on Delhi called Bharat ka yeh reshmi nagar.

Written almost 50 years ago, it is starkly true of the capital's insensitivity to the poor and dispossessed even today.

The poem, like all of Dinkar's writing, is best read and understood in Hindi. 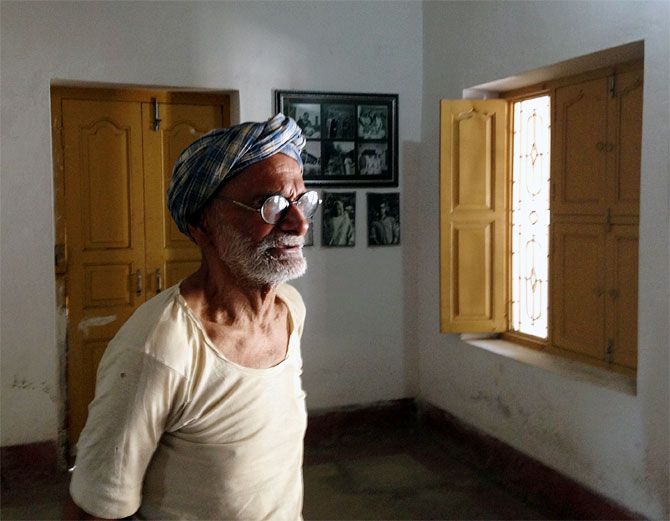 IMAGE: Nephew Naresh Prasad Singh's family lives in the village. He shows us around the museum.

Outside the Dinkar museum -- which is locked -- are verses from Urvashi, the poem for which he received the Bharatiya Jnanpith Award, India's highest literary honour in 1972; and Parichay.

His nephew, Mr Naresh Prasad Singh, has come to unlock the gate. He gives a walk through of the single room-cum-vernadah that has a few photographs and a bed; the poet's original home lies in a derelict state next door.

Apart from the few pictures, the bed and walking stick, there is not much else of the poet here. Outside is a full sized painting of the poet almost photograph-like, painted by an artist in Mysore.

The Dinkar library, museum and school has been constructed on land donated by the family, says grandson Arvind Singh.

"Successive governments in Bihar since Bindeshwari Dubey's chief ministership have been saying that they will help in preserving his heritage but those are just empty words. The village road has worsened further in the rain," adds Mr Naresh Prasad Singh. 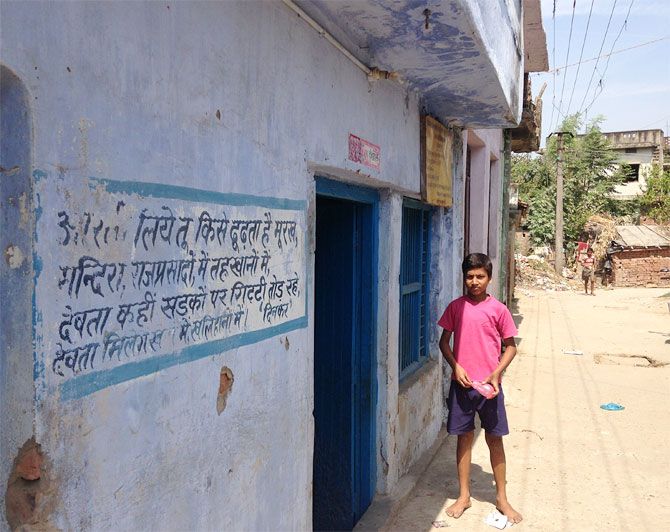 IMAGE: The village walls have verses from Dinkar's poems written on them.

In Samaria which has a school up to Class 11, verses from the poet's poems are written on the village walls. They greet you at every other corner and have been created by the folks at the library dedicated to him.

The museum has been constructed by the poet's eldest son Kameshwar Singh. Nephew Naresh Prasad says children of the village can recite many of Dinkar's poems but the little boy standing near one of his poems on the wall doesn't know any.

"As time goes by, the value of people diminishes. Dinkar has got respect and hasn't," says grandson Arvind Singh. "University chairs should be established in his name and I hope it happens gradually."

"More than statues," says Singh, "I feel his books and poems should be read. By reading the works of Dinkar, Nirala, Mahadevi Verma etc, we enrich our intellectual tradition."

"And that is the best form of respect."