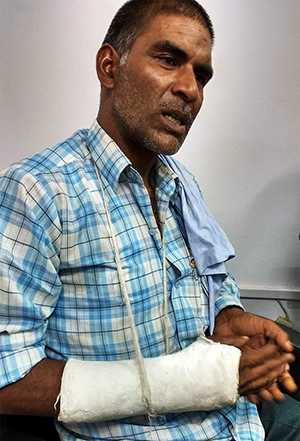 The BJP has chosen a Dalit to be India's next President.
How will that momentous decision change the lives of the nation's Dalits?
Agnibhaskar Buddh lives in Shabbirpur village, a Dalit area in Uttar Pradesh's Saharanpur district.
On May 5, his village was ransacked and burnt by a mob of upper caste men.
Buddh's story reveals that while Ramnath Kovind's ascension to the Presidency is an encouraging sign, little may change for the Dalits who encounter discrimination and violence on a frequent basis. 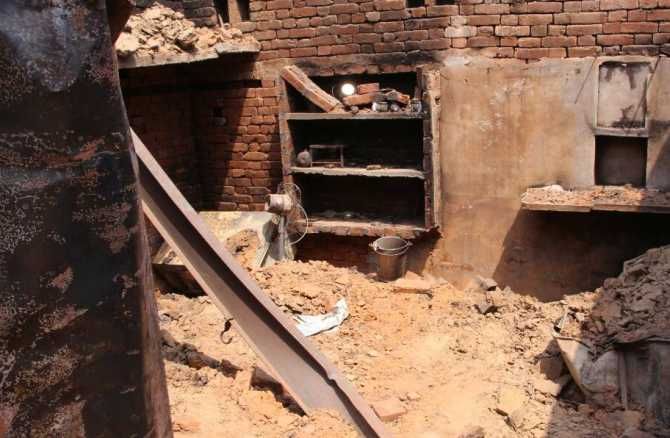 IMAGE: Most of the homes, like this home owned by Agnibhaskar Buddh in Shabbirpur, were ransacked and burnt down by rioters.
Photograph: Kind courtesy Suresh Gautam

Earlier, on March 4, Yashpal Singh, the station in-charge of the Shabbirpur police station, raised objections that the construction on the land that the village owned, and keeping a statue of Dr Babasaheb Ambedkar, was illegal.

The police said they were under pressure from the (Bharatiya Janata Party) MP and MLA of the region to stop the work on construction of Babasaheb's statue in the Ravidas temple.

After this, young Rajput boys started harassing our girls and womenfolk.

We saw Congress, Samajwadi Party, BJP governments before this one (Yogi Adityanath's government), but under no dispensation did these Rajput youth ever misbehave with our mothers, sisters and daughters.

They started doing this soon after Yogi Adityanath's government came to power in UP.

When we complained about the youths' behaviour to their elders, they condoned their actions, saying they were just 'small children'.

We told them that small children don't brandish swords and fire guns in the air, but their elders and the police ignored our concerns and fears.

We complained about this harassment to Deoband BJP MLA Brijesh Kumar, but instead of giving us a patient hearing, more than 200 members of the VHP (Vishwa Hindu Parishad) and Shiv Sena surrounded five of us and started shouting slogans.

We were insulted; our elders were abused and threatened with dire consequences if we went ahead with the construction of the (Ambedkar) statue. 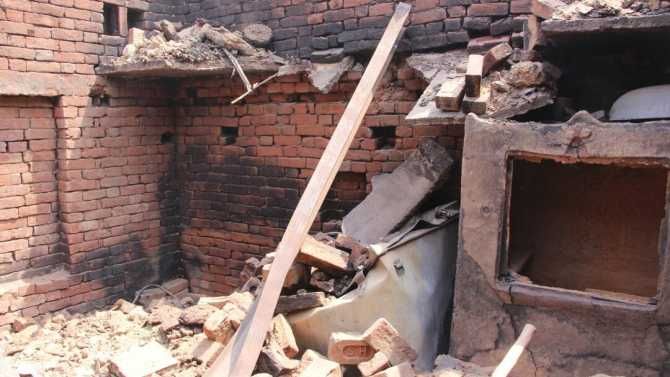 IMAGE: The home of Agnibhaskar's neighbour Neetu Gautam, who was away in Haridwar -- where he works -- when the attack took place on May 5. Photograph: Kind courtesy Suresh Gautam

Later, on April 4, the SO (station officer) called on our gram pradhan (village head) Shiv Kumar and threatened him.

The same day, the tehsildar called the gram pradhan and said we would get the permission for raising the statue on April 12 (April 14 was Ambedkar Jayanti) and we could go ahead with the construction.

Before this could move any further the district administration transferred all the officers who had promised to give us the permission.

Despite these tensions we went ahead with our Ambedkar Jayanti celebrations on April 14.

The same night, about 50 Rajput boys came to our village and shouted slogans against Babasaheb Ambedkar.

That day we realised they were up to something more sinister in the days ahead.

You have the country's Prime Minister Narendra Modi encouraging people to celebrate an entire week in remembrance of Dr Babasaheb Ambedkar and his own partymen raise objections against building his statue, abuse him and his wife Ramabai, and kill people who want to celebrate his birthday.

This proves that the BJP government at the Centre or the state don't want the welfare and well-being of Dalits.

Manuwad has taken over the system and Dalits will only suffer in the days to come. 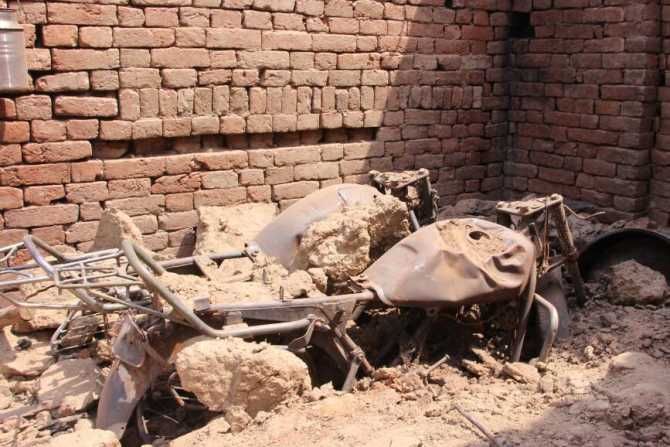 IMAGE: Two of the bikes belonging to Neetu's family were burnt down.
Neetu fears arrest if he returns to his village or fears being branded a Naxalite.
He had accompanied Agnibhaskar to Mumbai.
Photograph: Kind courtesy Suresh Gautam

On May 5, the Rajputs organised a big meeting in Shimlana village.

Rajputs from across India were attending this sammelan (meeting).

The chief guest was Sher Singh Rana (the man convicted of killing Phoolan Devi, the dacoit-turned-MP), who was on parole from prison, and they wanted to commemorate him.

Their main agenda, though, was to spread terror among the Dalit villages of Maheshpur and Shabbirpur after the commemoration and that's why they had come prepared with swords and firearms.

Their main aim is now to dominate Dalits and make us their slaves.

Will you keep quiet, do nothing, if people come to your village and abuse your girls, mistreat your women, and for no reason start demolishing your worship places?

Though they had no permission to do so, the new SO of the area sided with them and said that their procession would travel through our localities.

They came with a DJ band, accompanied by policemen and when they passed through our locality they asked us to clear the road for the procession.

As they were passing by our village they kept heaping abuses on Babasaheb and Dalits.

Hearing the commotion, about 10, 15 people from our locality gathered and confronted them.

We requested the police to intervene, but they remained spectators.

Since we were small in numbers, we did not protest against their slogans and abuses. 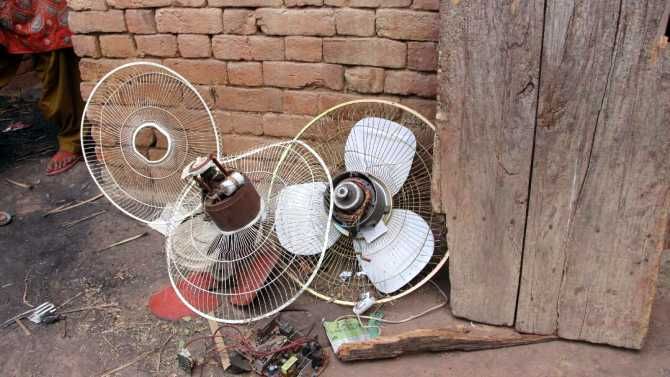 IMAGE: Another house ransacked during the riots on May 5. Photograph: Kind courtesy Suresh Gautam

After this group went away, another batch of thugs came along with policemen.

Immediately, about 1,000 people who were following them swept down upon our village and started burning our houses, demolishing them, attacking the Ravidas temple, and molesting our mothers, sisters and daughters.

I returned from the jungle along with my children and witnessed what was happening.

To save the honour of our women and gods, the 40, 50 people who were there in the village began collecting stones and began pelting them at the marauders.

We knew we were outnumbered and would meet a terrible fate.

We also contemplated begging for our lives, but knew that even if we begged, they would not let us go unharmed.

So, most of us started running away.

About seven of us, including me, could not escape and had to face the worst humiliation of our lives from these attackers.

They attacked me, my brothers, their wives, my mother and my daughters with swords and molested them.

We knew we were going to die, so we decided to fight back with whatever courage we could gather.

In this melee, one of the thakur (Rajput) boys, came out of the temple, which was in flames, and collapsed outside.

None of us is responsible for his death. Even the post mortem report states that he died of asphyxiation.

But they disrobed us, slashed my wife's chest and my head with swords.

They even attacked our cows with swords.

We called the district magistrate, SDM, police, but nobody came to rescue us.

Even those from neighbouring villages who came to douse the flames were stopped by this mob.

They even closed the jungle routes so that none of our brothers could come to help us. IMAGE: Even the cowsheds were not spared by the marauding mobs, alleges Agnibhaskar.
One of his cows, which was slashed by the rioters, died later, he said.
Photograph: Kind courtesy Suresh Gautam

My wife, my sons and I were in hospital for almost 20 days.

I plead with the state government that let these people attack us when we are in full force.

Let them also come in large numbers. We are not worried.

Give us an equal chance to fight these marauders.

Why should the police help them and not us?

Let the police remain neutral, but give us a chance to face these attackers when we are also in equal numbers.

Let our women and small children be taken to safety and then give us a chance to fight them for our security.

We know we will die because we will be small in numbers, but we will at least get a fair chance to fight for our survival.

What bravery is it that you molest our women, disrobe them?

What kind of people are these who talk about Maharana Pratap and molest our women, attack our cows in the same breath?

These are not brave people, but eunuchs.

We have not worn bangles.

If we cannot save our honour, we can at least die fighting these men.

They didn't spare our cows.

They called them Dalit cows and tried to burn their sheds too; the cows were slashed with swords.

What kind of cow bhakti is this that you label even animals as Dalits and inflict pain and atrocities on them?

What kind of government is this that connives with such attackers against the powerless?

They must understand that our children are well educated now and can give them a tough fight on their terms.

And that is what makes these upper castes insecure.

They fear that if our children get good education, then they will surpass theirs.

They just can't stop us now.

Try stopping us and see how it boomerangs on you.

If you have guts, then try stopping us.

Yeh toh do din ki chandni hai, phir andheri raat hai (The political power that you have acquired will not last long; what follows will be darker nights).

It was only a miracle that we survived that day.

What kind of governance is this? This is daylight terrorism.

Those responsible for attacking our village should be punished by the law.