'The government is doing away with crucial laws such as the Forest Conservation Act and the Environment Protection Act which had helped safeguard our forests.'
'The President has to show that she will stand in favour of tribal rights.' 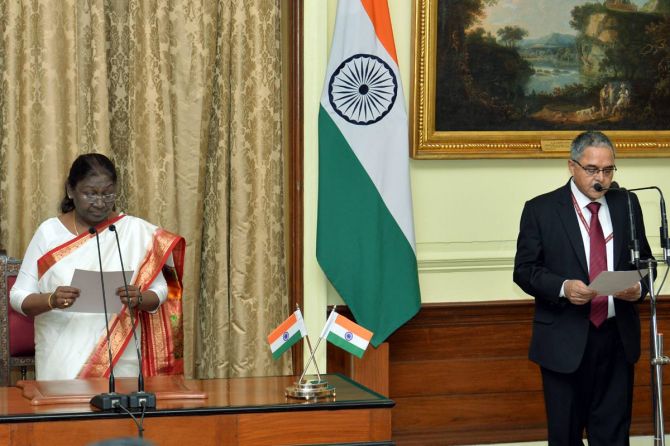 India's sizeable tribal population -- which presently numbers over 85 million -- believes that her humble beginnings, having started her career as a teacher and then being elected as a councilor of the Rairangpur Nagar Panchayat, will not only help her understand their plight but reverse the slew of laws being brought in by the government to undo tribal autonomy.

Gandhian activist Himannshu Kumar, who has lived in Dantewada for several decades and has devoted his life for the upliftment of impoverished tribals in this region, has great expectations from Murmu.

"Although she comes from the BJP, as President, she is the guardian of Adivasi interests. No President in the past has this used these powers, but she can take direct action to protect the Adivasis," Himanshu Kumar tells Rediff.comRashme Sehgal.

Himanshu Kumar, who ran an ashram for tribals in Dantewada -- the Vanvasi Chetna Ashram before it was destroyed by local policemen -- has witnessed the steady erosion of tribal rights with large corporate takeover of tribal land.

In 2009, Himanshu Kumar had sought a probe into the extrajudicial killing of ten tribals including a twelve-year-old girl.

Not only did the Supreme Court recently dismiss his plea for an investigation, but he was charged with 'criminal conspiracy' and asked to pay a fine of Rs 500,000.

His answer to the court verdict was he would not pay the fine and prefer to go to jail instead since agreeing to pay the fine meant making an admission that he had made a mistake which was not the case, he said.

"The BJP has been promoting the interests of large corporate houses who are grabbing these resources and depriving millions of tribals access to their land and forests," says Himanshu Kumar.

"The President understands these problems better than anyone else and so we expect her to act," says Himanshu Kumar who along with several tribal activists are currently in New Delhi awaiting a meeting with the Rashtrapati.

"Realistically speaking, we have no such expectation. I would be glad to be proven wrong. The government is bringing in several new environmental laws and doing away with crucial laws such as the Forest Conservation Act and the Environment Protection Act which had helped safeguard our forests. They changes are doing so via notifications and office memoranda," points out Dharmadhikary.

"The President has to look at these issues with sensitivity and show that she will stand in favour of tribal rights. I will hold my judgement till such time as events unfold," adds Dharmaadhikary. 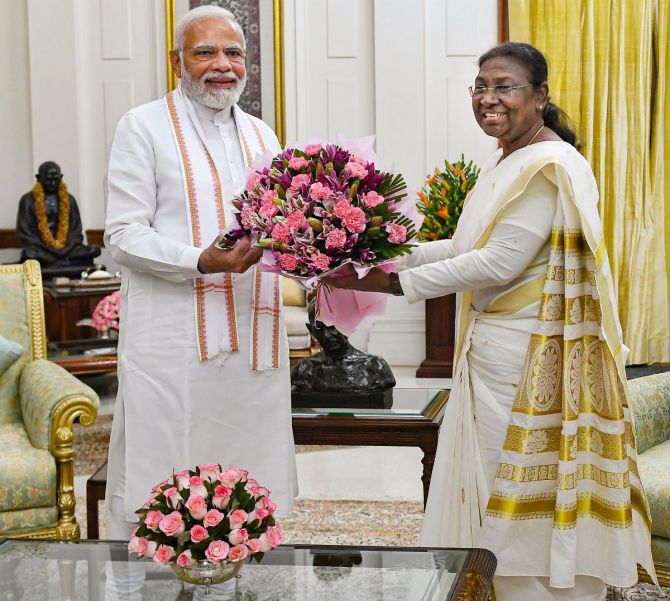 "Modi has brought her for his own political ends in order to showcase to the world that he has a tribal leader at the helm," argues Professor Vikram Soni, a physicist who works in the field of water and forests.

"It is for President Murmu to take the lead and help initiate several steps to protect our fast deteriorating environment," says Professor Soni. "She must start a joint management plan where people who are organically connected to the forests be brought in to take care of them."

"From the 18 per cent of forest left in India, only 8 per cent is high quality forest, the remaining ten per cent is degraded forest," Professor Soni points out.

President Murmu, he says, must help ensure this tribal population be allowed to stay in the periphery of our forests so that they play a key role in protecting whatever remaining forests are left in the country. 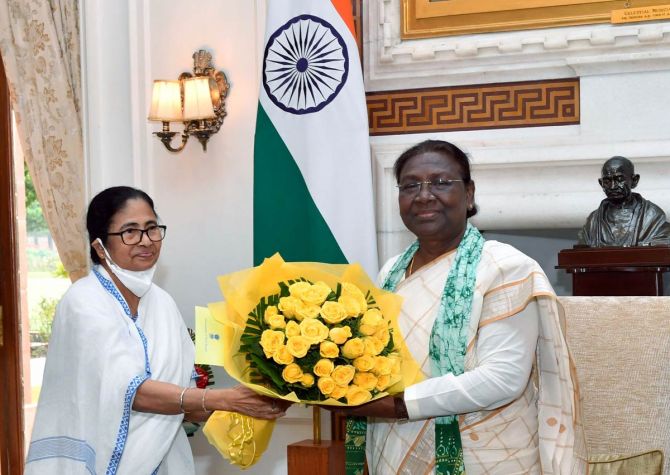 "If she was a sensitive and thinking person, how could she have joined a party like the BJP which follows such discriminatory policies?" asks Hindi poet and writer Girdhar Rathi.

"Of course, one silver lining was her refusal as governor of Jharkhand to sign amendments to the Chhotanagpur Tenancy Act 1908 and the Santhal Tenancy Act 1949 whereby the government had the right to allow commercial use of tribal land to take tribal land on lease purposes. She returned the bills and the Raghubar Das government was forced to withdraw the bills in 2017," says Rathi. 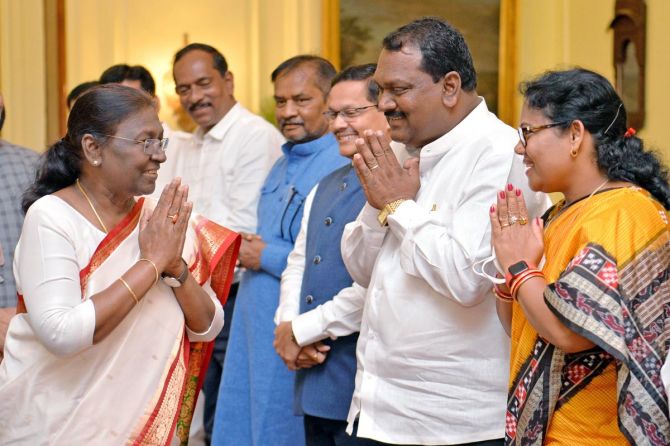 Dr A J Thomas, former guest editor of the bi-monthly English literary journal, Sahitya Akademi, agrees that the President's role is limited but within these constraints she should be able to negotiate difficult governance issues.

"Thirty eight per cent of population in Odisha comprises of tribals. No other state has such a large tribal population. These tribals are much better integrated into society largely because Odias remain a largely tolerant population," says Dr Thomas.

"President Murmu has faced enormous struggle at a personal level and that is bound to have left a strong impression on her psyche," he adds. "This can be translated into ensuring that exploitation of this population is minimised."

Senior journalist Parsa Venkateshwar Rao believes the President can negotiate choppy waters with adroitness if she has the will to do so.

It is a Constitutional post, but people have high expectations from the President.

Rao cites the example of then President K R Narayanan who had declared he would be a 'working President and not an executive President.'

President Narayanan described the demolition of the Babri Masjid as the greatest tragedy India faced since the assassination of Mahatma Gandhi and also criticised the Atal Bihari Vajpayee government for not taking appropriate measures to stop the communal riots in Gujarat in 2002.

Rao further cites the example of then President A P J Abdul Kalam who after his swearing in informed Vajpayee he was going to Gujarat post the 2002 communal riots. He was doing it to help 'remove the pain and accelerate the relief work being done for the riot affected victims.'

This was President Kalam's first official visit after his swearing in and one year later he decided to spend two days in Jammu and Kashmir where he spent time interacting with Kashmiri students and also meeting local MLAs, the first such dialogue after the assembly elections held in 2003. 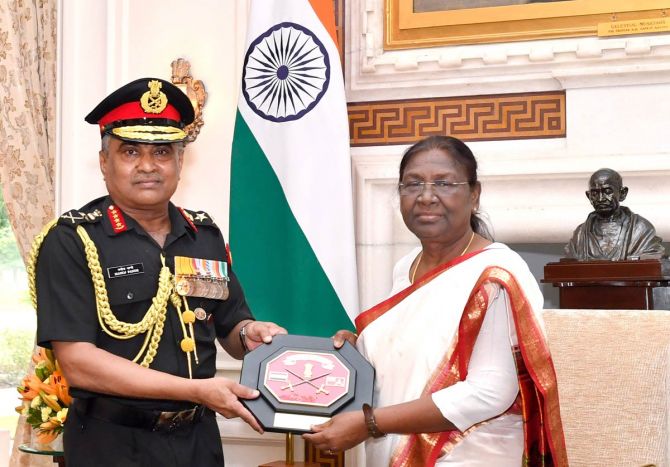 "President Murmu has worked her way up. She knows what it is to struggle. I believe there will be scope for her to take up many issues. She has been a minister in the government of the Naveen Patnaik and has developed a detailed understanding on issues of livelihood and tribal health," explains Akhila Sivadas, who heads the Centre for Advocacy and Research.

Ramni Chopra, a teacher who recently retired as principal of the primary section at the Stepping Stones school, believes the eyes of millions of teachers are fixed on President Murmu. "She has been a teacher. She understands the importance of education," says Chopra. "I understand the government is coming up with a new education policy where experimental learning is going to be made an essential part of learning. If she can help oversee that, it will be a big leap forward for the nation.

As guardian of the Constitution, President Murmu must end the marginalisation and persecution of minorities and Dalits, asserts S M A Kazmi, who edits the Northern Gazette Web site.

"The targeting of minorities must end," says Kazmi, "and the President can play a key role in this."