'The fact that she kept her faith in the power of doing good all through the thick and thin in her life, that she worked sincerely for the upliftment of the tribals, the downtrodden and the backwards, is one of the most inspirational aspects of her life.' Tawde tells Prasanna D Zore/Rediff.com how Droupadi 'didi', as he affectionately addresses her, inspires him and why she deserves to be elected to the highest office in the land.

'Her journey as a teacher and political leader is truly inspirational'

Droupadi didi comes from a tribal family and despite many social and economic hardships she has worked her way through her career as a teacher and political leader. It is admirable that she has worked from the grassroots level for a political party (the Bharatiya Janata Party) beginning her political journey as taluka president.

She has also adorned the Constitutional post of governor of a state (Jharkhand, between 2015 and 2021).

You are in a wonderful zone when you have conversations with such a person having such all-round experience of public and social life.

Her personal experiences that she recounts make you understand what humility is all about; her journey as a teacher and political leader is truly inspirational and motivational.

I have been in politics for more than 25 years now since 1995; I was born and brought up in a privileged city like Mumbai. But Droupadi didi was born into a tribal family in Odisha, became a teacher, overcame tragedy in her family -- she stood on her feet despite the deaths of her children and husband.

'Tremendous commitment for welfare of downtrodden' Despite all the hardships didi faced since her childhood, her conviction and commitment for the welfare of the downtrodden, the backward and the oppressed is tremendous.

Politicians like me have always been privileged by the virtue of being born in a city like Mumbai. I was fortunate enough to have gained from the experience and blessings of leaders like Pramod Mahajan, Gopinath Munde, Nitin Gadkari and (L K) Advaniji and now Droupadi didi.

In the future, not many will have the fortune to work with people like these who are singularly committed to a cause, to an ideology.

And to choose a person like Droupadi didi -- a tribal and a woman -- by the honourable Prime Minister Narendra Modi, the BJP Parliamentary Board evidently signifies the direction in which great leaders like Modiji is planning to take India.

It is a grand vision of India where all sections of society get a chance to rise to the highest honour that nation has to offer a person.

'Understanding and solving concerns of people'

The entire experience of watching such a process from close quarters teaches you much beyond politics. To give a worker like me an opportunity to see the entire process of a Presidential election from such close quarters is an honour for me.

I am discussing the process of getting Droupadi elected to the post of President with chief ministers of various states in India, with the leaders of our alliance partners, with independent MLAs, with tribal MLAs from various states and all this is quite fulfilling and inspiring in my political career.

I am briefing Droupadi didi about various developments around the election of President of India.

We talk about her experiences as the governor of Jharkhand, transport minister of Odisha and from that she teaches you how important it is to understand the concerns and problems of common people and how to work towards solving their issues. It is indeed an important lesson I am learning from her.

She recounts the difficulties she and many of her coworkers would face while doing social and political work in tribal areas; there is tremendous poverty and backwardness among the Odisha tribals.

Being a teacher worked to her advantage because people knew her more as a teacher than a politician. That helped her win people's trust and acceptance.

'Strengthening bonds between the weakest and strongest links' 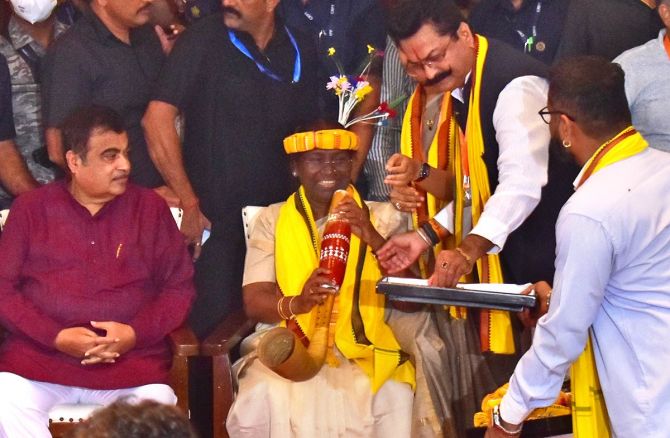 The fact that she kept her faith in the power of doing good all through the thick and thin in her life, that she worked sincerely for the upliftment of the tribals, the downtrodden and the backwards, is one of the most inspirational aspects of her life.

The significance of having the first tribal woman as the President of India lies in the fact that it will further help the integration of tribals into the Indian mainstream as those who live a life of privilege are still under the impression that the tribals of India live in the Stone Age.

It will further strengthen the bonds between the weakest and strongest links of our country and inspire millions of tribals in India to dream about coveting the highest honour that the country has to offer.

Droupadi didi understands this (the tribal) part of India and she will further help their integration into the mainstream.

'Her spiritualism reflects the culture and ethos of Hindustan'

While she has always been a spiritual -- not ritual -- person and I am not saying that she is into fasting or wears saffron clothes and all that, but her spiritualism reflects the culture and ethos of Hindustan; she does yoga every day for an hour-and-a-half.

Being spiritual helps her connect better with the country, her people, and work for their betterment. She will be in a very good position to showcase India's diversity not only on the national but also on international platforms.

Like Atalji (Atal Bihari Vajpayee) worked sincerely for making A P J Abdul Kalam India's President -- not that he was a Muslim, but an internationally acclaimed scientist, academician and scholar and above all a great Indian -- today Modiji has proven to the world that India celebrates in diversity not just to showcase it to the world but a celebration of diversity that brings about transformational revolution in the way we Indians think about our country and its people.

It was important that people who remain unseen, unknown and yet work for the spiritual, social, economic, and political upliftment of its people should be given an opportunity and the BJP has done it again.