'Our community has lost a giant'

Urvashi Vaid dreamed of a common movement for social justice that could address them all: Racism, gender oppression and homophobia.
Sandip Roy salutes the memory of Urvashi Vaid, one of America's most prominent LGBT activists, who passed into the ages this month. 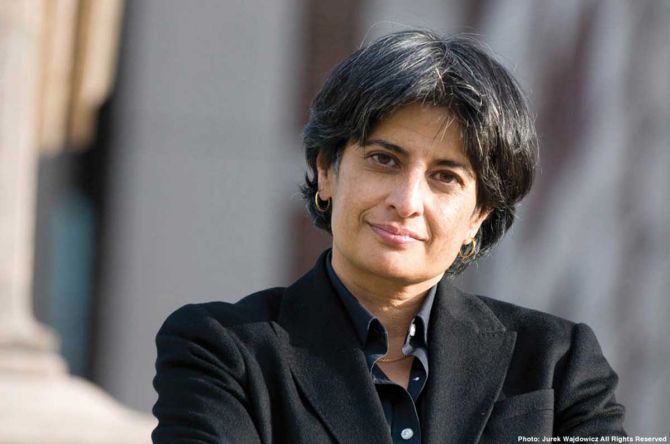 When Urvashi Vaid, one of America's most prominent LGBT activists, died recently, Gregg Gonsalves, an epidemiologist at Yale who had also been an AIDS activist, tweeted: 'You cannot talk about LGBTQ rights in America without her.... She is an icon, a pillar of our history, we owe her everything.'

Vaid herself made history as the first woman and the first person of Indian origin to head the influential advocacy group, the National Gay and Lesbian Task Force, in l989.

The New York Times published tributes to her from tennis great Billie Jean King, playwright Tony Kushner and MSNBC anchor Rachel Maddow. And yet it is striking that very few quote any South Asian LGBTQ+ activists about her influence on their lives.

The omission is not too surprising. Vaid's legacy does not lie in the South Asian LGBTQ+ movement in the US or in South Asia. Her activism was first within the mainstream LGBTQ+ movement and then in the larger liberal movement.

The 1990s was a time when many South Asian LGBTQ+ groups like Trikone in San Francisco, SALGA in New York, Khush in Toronto all came of age. For them, the mere presence of Vaid on the national scene was truly inspirational.

It's easy to say she made history. But it's important to remember that this was not a trajectory that many would have predicted for an Indian American immigrant woman at that time.

Vaid was born in New Delhi in 1958. Her father was the Hindi writer Krishna Baldev Vaid, famous for books like Uska Bachpan. Her mother Champa Bali Vaid was a poet and painter. Krishna Baldev Vaid moved to the US in 1966 to teach English literature at Potsdam University in upstate New York.

In an interview with Samar magazine (Equality, Identity and Factoring the Left back into the Political Equation [external link]), Urvashi Vaid said growing up in a largely white university town with progressive (though not political) parents she had an early education in feeling different.

She got involved in student politics both in high school and Vassar college and said, 'Before I realised I was a lesbian, I realised that I was a feminist.' Vaid was the communications director at National Gay and Lesbian Task Force when she became its new executive director.

At a time when AIDS was ravaging the gay community in the US, picking a woman, and a brown one at that, to head the organisation felt like a gamble.

Activist and colleague J'aime Grant remembers in a Facebook post that gay white board members were dubious and some even advised Vaid to get a 'cute white gay man' as her development director to 'offset' her 'weaknesses'.

Instead she hired Grant, a white lesbian who had been working in a rape crisis centre. And she got the Taskforce to start a conference called Creating Change to help grassroots activists connect with each other and build new cohorts.

That conference is still going strong.

But none of this was tokenism. Vaid's greatest legacy, apart from the many projects she co-founded and the organizations she headed, was her unshakeable faith in intersectionality and expanding the lens.

She once said in an interview that race in the LGBT movement was seen 'primarily as an issue of diversity or outreach, not as an issue of equity or fundamental justice.' That is why, even though she was not at the forefront of founding any South Asian queer groups in the US, she remained hugely inspirational to South Asian American queers.

Urooj Arshad, a queer activist of Pakistani origin, who has been working on LGBTQI+ issues for almost 25 years, remembers hearing her at a Creating Change conference in 1996.

"It was my first time seeing a South Asian queer person speaking to such a large, riveted audience and it opened a door for me that I didn't know existed."

Neena Hemmady, co-founder of the Chicago-based South Asian queer women's group Khuli Zaban, told the Bay Area Reporter (one of the few publications who interviewed South Asian activists about Vaid) that she and Vaid had debates about identity politics versus true equality.

"Decades later, I understand how right she was. Today our community has lost a giant. She made us so, so, much better."

Activist and former Trikone chair Dipti Ghosh says, "The main thing was that she wasn't just a South Asian lesbian, she was someone who was in a leadership position and making a lot of difference in a lot of people's lives." In 2006 when Trikone, the world's oldest South Asian LGBTQ+ magazine, turned 20, Vaid recalled two personal moments that were pivotal for her as a queer South Asian.

The first was when she attended the Desh Pardesh cultural conference in Toronto in the 1990s. She recalled, 'It was transformative to meet progressive, queer and straight, artists and activists who were South Asian and were talking in such fresh ways about our experience and perspective.'

The second was when she saw a grassroots LGBT movement emerging in India itself as well as in the Diaspora. 'Trikone helped nurture this movement and was an anchor for us.'

At the same time, she pointed to two other formative experiences that shaped her politically.

One was the 'trauma, loss, anger and creativity' unleashed by the AIDS epidemic. The other was leaving the mainstream LGBT movement to work in the 'moderate to liberal mainstream.'

She said that despite undeniable progress in LGBT rights, 'the right wing in America would not be as powerful as it is today if moderates and liberals took LGBT people or the centrality of racial justice more seriously.'

And she did not give the LGBTQ movement a pass either.

'But I don't think gay men question manhood in this way. They aspire to be accepted as men; they seek legitimation in the fraternity of men.' 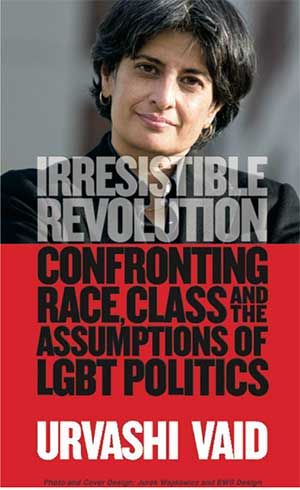 She tackled many of these issues in her first book Virtual Equality.

Writer Minal Hajratwala, who has also been a former board member with Trikone, said "It articulated the frustration that so many of us had been experiencing with the 'mainstream gay agenda' of the 1990s which was driven largely by white American men towards things like military access and domestic partner benefits and completely neglecting intersectionality and allyship."

Vaid's argument was that all different kinds of oppression had common roots.

She told Samar she dreamed of a 'common movement for social justice that can address them all: Racism, gender oppression and homophobia.'

She was clear in her goals. 'I'm not fighting for gay rights so that we can all live in a lavender bubble... I want to live in the whole world as an open lesbian.'

She spent her last decades working on creating this 'common' movement with roles in organisations like the Arcus Foundation, the Ford Foundation, the Columbia Law School and her own consulting agency, the Vaid Group.

Most importantly she never lost hope in the possibility of change.

I knew Urvashi Vaid during my stint as an editor for Trikone magazine in San Francisco, but I cannot say I was a close friend.

After she passed I went back into my old e-mails and found several from her. The last exchange was striking.

Her nephew was studying at Stanford University and she was connecting us saying he needed to be more connected with progressive gay South Asians in the Bay Area.

She wrote 'Alok is brilliant and way smarter than either of us ever will be and more radical too.'

Alok Vaid-Menon is now a well-known gender non-binary performance artist and poet who remembered his maasi on social media by saying that they often argued about politics but 'I only had the confidence to push back because she templated it for me first. She gave me permission to be.'

What struck me was how a decade ago, at a time when I was no longer the editor of Trikone and she was no longer the executive director of NGLTF, Urvashi Vaid was still tirelessly building connections to make the world a better place for all of us.