The Union Cabinet has approved three amendments to the Muslim Women Protection of Rights on Marriage Bill, which has been cleared by the Lok Sabha and is pending approval of the Rajya Sabha.
Most incidents of triple talaq are eloquent examples of the failure of Muslim society to instil in its men the teachings of the Quran; instead, they end up relying on the Quran's interpretation by local maulanas, says Ziya Us Salam.
A fascinating excerpt from Till Talaq Do Us Apart: Understanding Talaq, Triple Talaq And Khula. 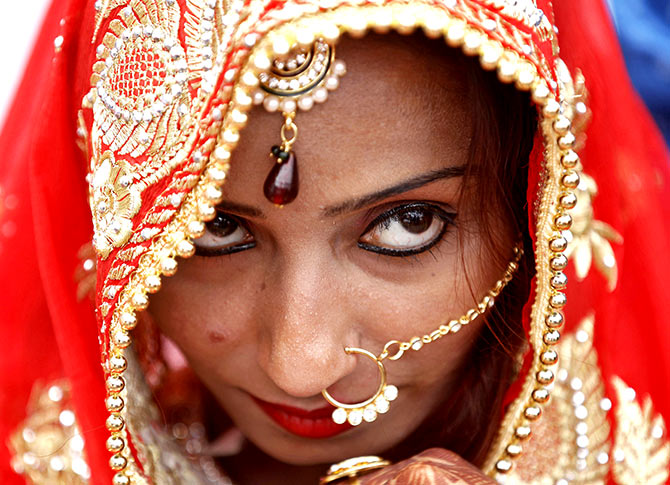 *IMAGE: Imams and maulanas answer by rote, even when answering matters of marriage and divorce. Photograph: Amit Dave/Reuters

Without ever having got a hint that instant divorce was coming her way, the 27-year-old resident of Hazaribagh was thrown out of her home along with her daughter.

The words 'talaq, talaq, talaq', spoken in anger, were sufficient to end her marriage.

Her attempt to get help from the local clerics only resulted in the latter asking for a period of about 20 days before they could come to a conclusion!

Less than a month later, in Jodhpur, a woman called Afsana was divorced by her husband over the phone. Munna, her husband of eight years, divorced her on September 18, 2017.

A few days later, in Rajkot, 23-year-old Rubina Lakhani complained to the police that she had been thrashed to unconsciousness by her husband, Afzal. Then he pronounced 'talaq, talaq, talaq'.

The woman got to know of the divorce -- completely against Islamic procedure -- when she came to her senses.

She was then thrown out of the house by her husband and his family members, claiming that she had been divorced. The man was booked by the police.

The three incidents do not merely prove the limitations of a judicial order in a society where ignorance renders the best of laws ineffective.

They relate a story of local maulanas unable to give the right advice at the right time, and men and women, even educated ones, not sure of their rights and duties in Islam.

It is drilled into almost every other man that instant triple talaq is the best, or maybe the only, way to end a marriage. And the maulanas seldom rise to the occasion to save a marriage.

The incidents also speak eloquently of the failure of Muslim society to instil in its men the teachings of the Quran; instead, they end up relying on the Quran's interpretation by local maulanas. 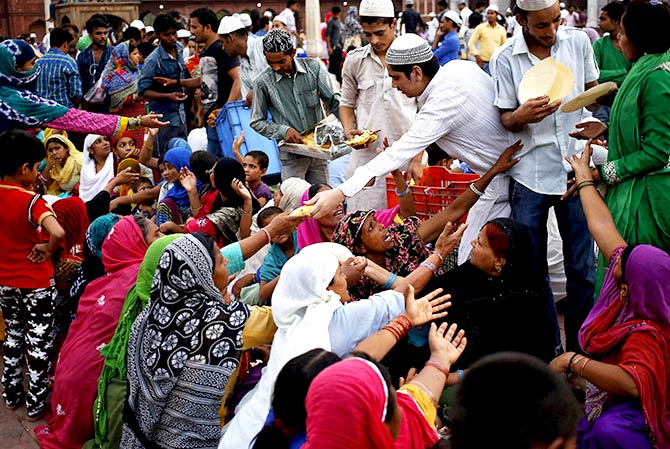 *IMAGE: It is not uncommon to see men seeking out an imam or a maulana to calculate zakat, which is usually paid in the month of Ramzan. Photograph: Anindito Mukherjee/Reuters

The reasons are to be found as much in our patriarchal society as in people's complete ignorance of the Quran.

Most common Muslim families in small-town India depend on the local imam to interpret the Quran for them, or even advise them on any issue pertaining to religion.

It is not uncommon to see men seeking out an imam or a maulana to calculate zakat, which is usually paid in the month of Ramzan.

Every year, the questions are the same: Is it 2.5 per cent of my earnings or savings?

Do I count all my property, including the house I am living in?

And what about the car?

Also, do I have to give zakat for my wife?

Every year, the imam or the maulana answers by rote, even when answering matters of marriage and divorce.

Then people ask, 'Should the marriage take place when the moon is in the ascendance?' or 'Is marriage disallowed in the entire month of Muharram or only in the first 10 days?' 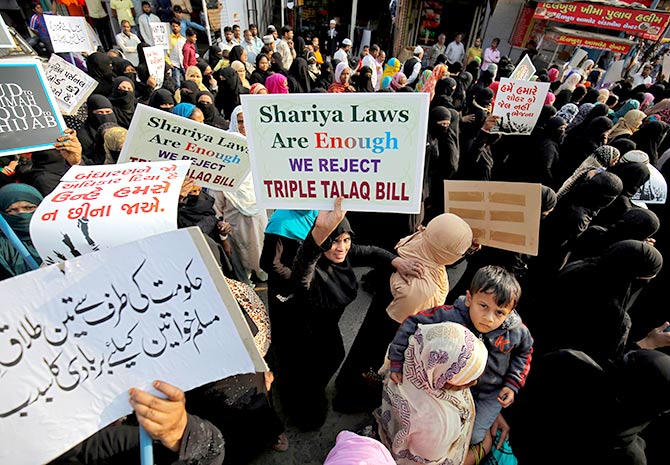 *IMAGE: A protest against a bill passed by the Lok Sabha earlier this year that aims at prosecuting Muslim men who divorce their wives using the triple talaq method. Photograph: Amit Dave/Reuters.com

Unfortunately, the local imams are often not well versed with the Quran. Probably all of them are hafiz, that is, they have memorised the Quran from the first surah, Fateha, to the last surah, Naas.

But they know not what they read or recite. They have no knowledge of Arabic or of Arab society at the time of the revelation of the Quran.

Hence, they read the Quran, even commit it to memory, without understanding it.

It would probably be the only instance across the world where a book of around 6,000 verses and 114 surahs across 30 chapters is memorised by millions without their understanding a sentence.

Worse, most of these imams are not reliably conversant with the Hadith either. They usually come from poor families and join a madrasa at least partly because it offers affordable-to-free food and accommodation. This supposedly free accommodation is usually nothing more than a floor to sleep on and two simple meals. 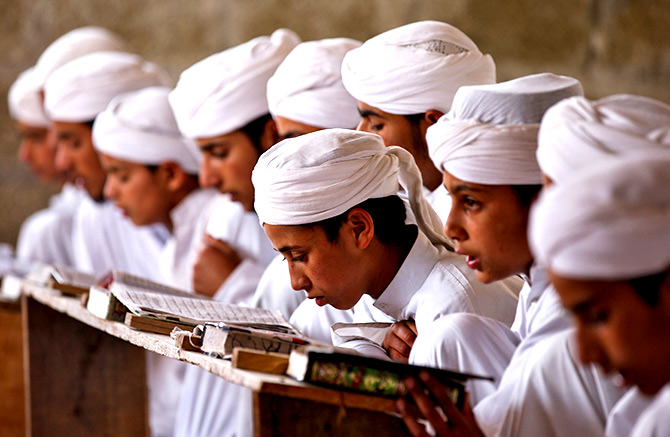 *IMAGE: Most imams usually come from poor families and join a madrasa at least partly because it offers affordable-to-free food and accommodation. Photograph: Danish Ismail/Reuters

At the first stage in the madrasa, they learn to read the alphabet and join letters to form words before going on to read the Quran. This, in turn, is succeeded by memorising sessions under a senior maulana.

Mistakes in recitation are often met with physical punishment.

Once these boys are able to memorise the Quran, with a little ceremony held in the Islamic month of Shaban, they leave the madrasa as the prospect of earning Rs 8,000 to 12,000 a month is too attractive to ignore or delay acceptance.

The madrasas usually impart knowledge of the root words of the Quran, the circumstances of the revelation of each surah, etc, and also the knowledge of the authentic Hadith, but only at a later stage.

In the first five years, only the Quran is memorised. There is tarjuma (translation), which is taught at a place like Darul Uloom, Deoband, but not in most smaller madrasas.

It is only in the sixth year at the madrasa that tafsir (commentary) of the Quran is taught.

Soon after, the students get to read Ibn Kasir.

Much before that, most needy boys step out as hafiz, all keen to start their careers as imams in a nondescript masjid on a paltry salary, with nothing like paid leave, gratuity or medical compensation, etc.

The only free thing that comes their way is a Thursday meal offered by a benevolent local, or a little token offered at the end of taraweeh prayers during Ramzan. 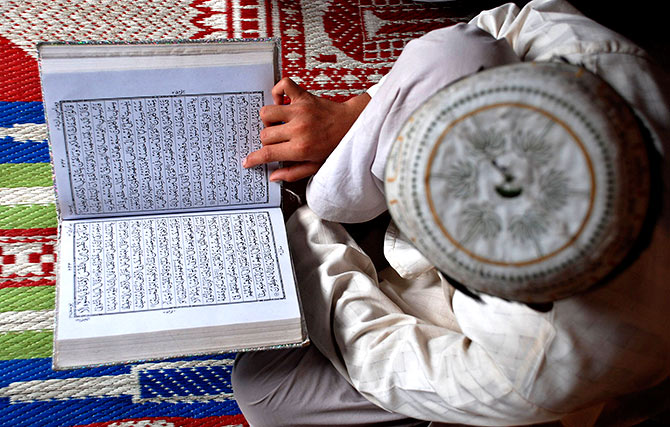 *IMAGE: At the first stage in the madrasa, they learn to read the alphabet and join letters to form words before going on to read the Quran. Photograph: K K Arora/Reuters

If, in their years at the madrasa, nobody taught them to reason, to explore, to ask questions, as professionals, they neither have the resources nor the opportunity to attain higher knowledge.

These hafiz boys become imams in smaller towns and villages across India, particularly in the Hindi-speaking belt.

They recite with perfect diction, their voices well-trained. Unfortunately, they know not what they recite.

Hence, when a local resident comes to them for advice, they are not always able to give an informed opinion.

Their ignorance often impedes the community's development. There have been instances of imams in areas populated by the poorer sections advising the residents to withdraw their children from public schools if they want them to grow up to be alims!

It does not strike them that the first word revealed to the Prophet was 'Iqra', which means 'read', and that Islam makes seeking knowledge the duty of every being, with one verse in the Quran saying, 'Oh Lord! Increase me in knowledge.'

In a case of talaq, the situation can have particularly dire consequences.

Despite being hafiz, they are not well versed with the chapters pertaining to different kinds of divorce.

As part of a patriarchal society, they would have only heard that three pronouncements of divorce mean that a marriage is over.

Nobody at home or at the madrasa tells them that there is a process of effecting a divorce clearly outlined in the Quran.

Thus, when the father of a woman approaches the imam for advice after his daughter has received triple talaq through a letter or a text message, the imam is not able to say that this form of divorce is invalid or to substantiate his argument with verses from the Quran.

Some responsible ones merely direct the aggrieved to Deoband or Lucknow which, again, are often beyond the reach of the poor.

The ignorance of the local imam or maulana often has disastrous consequences for many marriages. 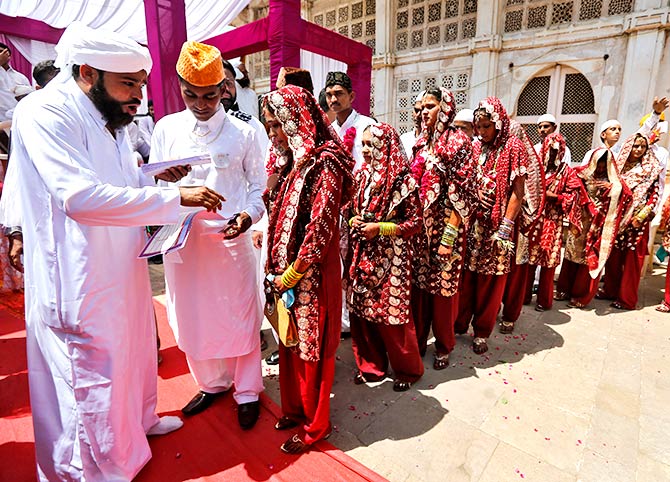 *IMAGE: The ignorance of the local imam or maulana often has disastrous consequences for many marriages. Photograph: Amit Dave/Reuters

In this context, it is important to remember that the main petitioner in the Supreme Court, Shayara Bano, claimed that nobody told her that her marriage subsisted after receiving triple talaq through the post.

And no maulana told her about the option of khula being open to a woman to end an unhappy marriage.

A well-informed maulana in Allahabad, her husband's residential town, or a caring one in Kashipur, her ancestral place, could have saved her much agony, perhaps even her marriage, and those of Afsana in Jodhpur and Fatima Suraiya in Hazaribagh.

However, it is not just maulanas or local imams in small mosques who are accountable.

There is ignorance, at times even opposition, to understanding the Quran. 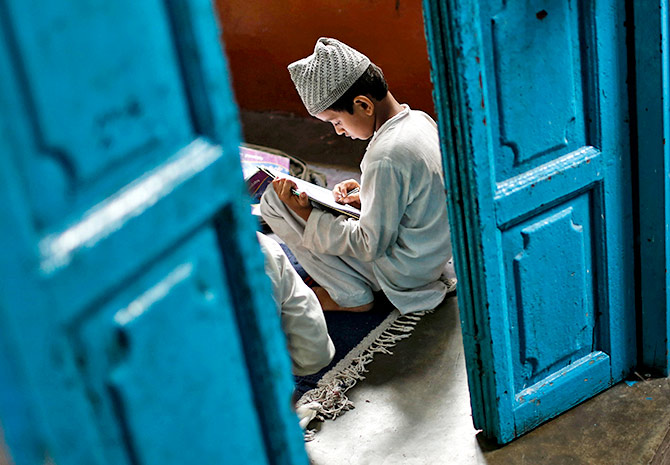 *IMAGE: Once these boys are able to memorise the Quran, with a little ceremony held in the Islamic month of Shaban, they leave the madrasa as the prospect of earning Rs 8,000 to 12,000 a month. Photograph: Ahmad Masood/Reuters

In most Muslim households, when a child starts going to school, his Islamic education also starts at home or at a madrasa nearby.

To term it 'Islamic education', though, would be an overstatement. The child begins to learn the Arabic alphabet.

Once he is able to join the letters well enough, he starts reading the Quran under a maulana.

Since the last chapter of the Quran contains the smallest surahs, often recited in compulsory prayers, the maulanas start the child’s tuition with this section.

From one chapter to the next, to the next, the child reads them all. Unfortunately, reading is all he does. He does not understand a sentence of what he reads.

The maulana teaches him the right diction, the right sound for a 'noon' and a 'quaf', but never is the child told the meaning of any surah or verse.

As a result, he grows up like his teachers: Reading the Quran but unaware of its meaning.

As an adult, when faced with a problem at home or in the office, such a man is not able to consult the Quran, simply because he never comprehended its meaning, never understood that the solution to his problems lay in the book, not outside.

The problem is compounded by the fact that the same man is imparted no knowledge of the authentic Hadith. 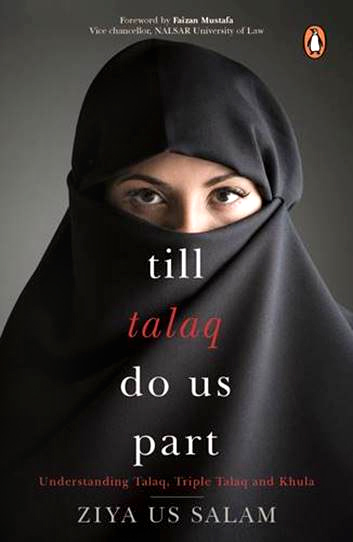 It is not uncommon to come across educated households with no commentaries of the Quran to be consulted in times of need, or even copies of the authentic Hadith, like Bukhari or Sahi Muslim, etc.

This inherited aversion to seeking knowledge is passed on to the next generation.

When this man goes to the local mosque, all he hears is a sermon in Arabic. He understands it not. He sits there out of reverence.

Occasionally, when there is a Hadith related in a little chat after prayers, no reference is made to its book. Is it authentic? Or is it zaif or weak?

No maulana ever tells him to consult Bukhari or Sahi Muslim or Daud for reliable Hadith.

The wheel of ignorance rolls on.

Excerpted from Till Talaq Do Us Apart: Understanding Talaq, Triple Talaq And Khula by Ziya Us Salam, with the kind permission of the publishers, Penguin Random House India.