What can be called the 'Narendra Modi impact' is visible in the Union government's decision to hang Afzal Guru a fortnight before the crucial Budget session of Parliament.

The timing of the execution leaves no doubt about the government's political intentions.

In spite of being in power for the last nine years, Prime Minister Manmohan Singh and United Progressive Alliance Chairperson and Congress President Sonia Gandhi had the opportunity to order the hanging of Guru -- who was convicted for his role in the December 13, 2001 attack on Parliament -- earlier, but they did not do so.

A S Dulat, former chief of the Research and Analysis Wing, India's external intelligence agency and an expert on Kashmir, told Rediff.com: "The hanging has made Jammu and Kashmir Chief Minister Omar Abdullah's position very vulnerable. The government has created an issue in Kashmir when there was none."

Kasab participated in the November 26, 2008 attacks in Mumbai, killing many people. Guru was convicted for being a part of the conspiracy to attack Parliament.

The decision to hang Guru will go down as a highly political move and is unlikely to be seen, merely, as one where the rule of law was upheld.

The government took the decision when it is on a weak wicket as it approaches the Budget session of Parliament which begins on February 21.

Shinde is the Leader of the House in the Lok Sabha.

Dulat and others ask that if the government believed all along that Afzal Guru was a terrorist and the courts had also said so, then why was he not hanged long ago.

The Afzal Guru file shuttled between Rashtrapati Bhavan and the home ministry for many years, but when it was politically suitable to hang him, things moved quickly, as Shinde explained after the hanging on Saturday morning.

A former home secretary told Rediff.com: "In India, the government takes so long over such issues that people keep mulling over it and eventually get numbed." He expects the country will take the hanging in its stride.

Many believe the spirit of rebellion among Kashmir separatists is not as strong as it was in the late 1980s.

Samajwadi Party supremo Mulayam Singh Yadav, perhaps the government's most important ally, said this week that the next general election is likely to be held in September. Yadav has emphasised that he finds it difficult to see the government surviving after the Budget session of Parliament.

The applause that greeted Gurjarat Chief Minister Narendra Modi after his speech at New Delhi's Sri Ram college on Wednesday could be one factor playing on the government's mind. Before Modi could begin his march outside Gujarat, the Congress-led UPA government is likely to act to blunt Modi's attack on the Congress.

The execution has also come at a time when Pakistan is troubled by serious domestic unrest.

The recent revelations by a former Pakistan general about the Kargil attack exposes the Atal Bihari Vajpayee government's actual security management. It will be an acute embarrassment for the BJP if more details emerge. The government is likely to attack the BJP on the Kargil issue at an appropriate time.

Those who argue that India is a 'soft State' should see Union Home Secretary R K Singh's brief interaction with the media after Guru's execution on Saturday. Asked if the hanging was a sensitive decision, Singh, with a stern face and firm voice, said, 'No! It wasn't sensitive.'

When asked if Omar Abdullah was informed about the hanging in advance, Singh retorted, 'Absolutely.' 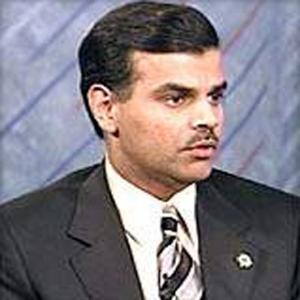 'Mansoor Ijaz was working for the ISI'