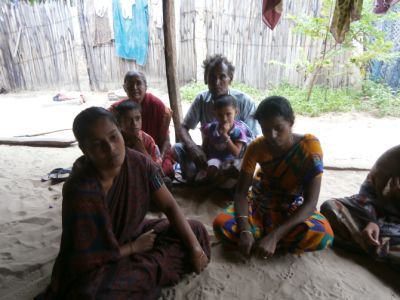 Pakyaselvi (left), on her left is Skanita. Pakyaselvi's parents are at the back with her daughter on their lap

A Ganesh Nadar/Rediff.com meets the shattered families of the five Tamil fishermen sentenced to death by a Sri Lankan court for alleged drug smuggling. Most feel the men are being made an example of to scare off other fishermen from straying into Sri Lankan waters.

A thin, frail woman sits in a crowded hut with several other women all sitting as if at a funeral. Sorrow hangs heavily on this household.

The television is set on a Tamil news channel. A voice clearly announces 'Five Indian fishermen have been sentenced to death by a high court in Sri Lanka…' The words seemed to hit the woman physically she cringes, covers her face with her hand. Her body shook as she held back her tears.

Jhansi doesn’t know what has befallen her since her husband Wilson was arrested by the Sri Lankan navy on November 28, 2011.

The silence in the room was shattered as Wilson’s aged mother started wailing. “Every time I close my eyes, I can only see a noose, it's hanging over my son’s head. What sin have we committed that we suffer this?”

Wilson, 44, has three children aged 13, 10 and 4. The Tamil Nadu government pays for the family expenses and also the children’s school fees.

Wilson’s sister started screaming, “There is a law to protect sea turtles, corals and the Gulf of Mannar but not a single law to protect fishermen. They are playing politics with five poor fishermen’s lives. The government doesn’t care for us.”

Through tears Jhansi said, “We cannot call him as he doesn’t have a phone. But he manages to speak to me once a fortnight from some other phone. He always asked about what is happening here, what everyone is doing, how we all are. He never told us what is happening there.”

Skanita’s husband Prasath is also in jail in Sri Lanka, he too has been sentenced to death on charges of trying to smuggle in drugs into the country. She looks emaciated and her eyes are swollen. She had obviously been crying for the past 24 hours since the announcement of the death sentence in Sri Lanka on October 30.

They have two children aged four and two. The youngest has never seen his father’s face.

“He has never been arrested for straying into Lankan waters before this. I have been married to him for six years. He has never been to the police station. I don’t know why they are accusing him of smuggling. Look at our hut, does it look like we have drug money?”

Pakyaselvi, 29, sat on the sand outside her home and spoke to us. Her parents sat behind her, they seemed dazed. Pakyaselvi’s four-year-old daughter sat on their lap, oblivious of the tragedy staring at her father.

Pakyaselvi also has a six-year-old son. Her husband Agustus, another accused, has been fishing all his adult life. Among the women Pakyaselvi seemed stronger than the others. “Everyone knows the case is foisted," she says.

“The Lankans don’t like our fishermen fishing there and arrest them. Every time they get arrested the Indian government gets them released. So they have slapped this case to scare other fishermen from going there. They are going to hang my husband as a lesson to others. Is there no justice in this world?”

John Britto was sitting on the street outside his home. Inside we could hear his wife crying loudly. There was a crowd there to comfort her. “I have been fishing all my life and have never been arrested for fishing in Lankan waters.

“My son Langlet has been fishing for only three months before he was arrested and now he has been sentenced to death. We are a fishing family and so he went. Not for this!”

Gladwin owns two boats, and goes fishing in one of them. “I am a labourer like the others. I don’t have any airs about being the owner. All the five fishermen who have been sentenced to hang went on my boat. They strayed by mistake. They would never smuggle drugs. They planted the drugs on my boat.”

“I have not taken any steps to retrieve my boat. They said it would be released after the case. I have met the former Congress MLA Hasan Ali who said he was a friend of Mahinda Rajapakse, the Lankan president. He told me that he cannot interfere unless the government told him to.”

On October 31, a day after the sentencing, there was a meeting in Thangachimadam, Rameswaram, presided by the local MLA M H Jawahirullah.

He said, “I will move a resolution in the state assembly condemning the judgment. I will personally go to Lanka and fight the case legally.”

The five Indian fishermen -- Emerson, P Augustus, R Wilson, K Prasath and J Langlet -- have been given time till November 14 to appeal in the Lankan supreme court. The Indian government has promised to take up the case legally and diplomatically.