'We often celebrate scholastic excellence while ignoring the majority of students who aren't there yet,' Pratham CEO Rukmini Banerji tells Geetanjali Krishna.
'It's time we celebrated the bottom.'
Illustration: Dominic Xavier/Rediff.com 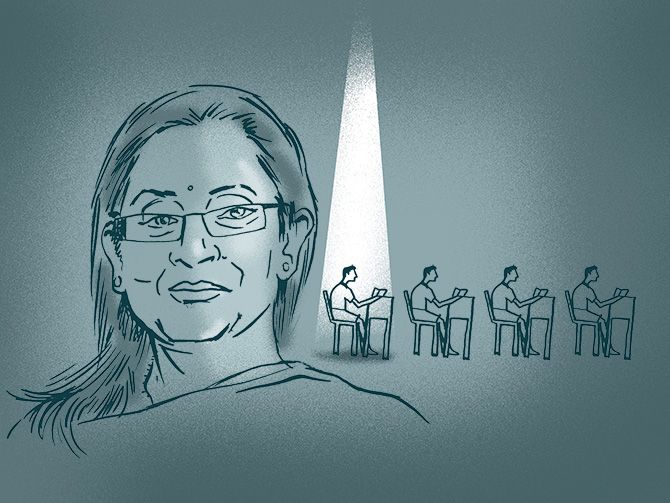 In the balmy warmth of the afternoon sun, an old gent plays croquet on the lawn outside the Tea Lounge at Delhi's Taj Palace Hotel.

Pretty porcelain teapots on silver salvers are being dispatched hither and thither to the handful of guests partaking of what many consider the most civilised meal of the day -- afternoon tea.

"It is picnic weather!" exclaims Rukmini Banerji delightedly, as she flops into a capacious sofa. "I was cooped up in office all day and didn't even notice..."

To be fair, Banerji and her cohorts at Pratham, one of the country's largest NGOs that provides high-quality, low-cost and replicable classroom interventions to address gaps in the education system, are a busy lot.

Their ASER (Annual Status of Education) Report (2017) released in January has caught the attention of the nation with its grim report card of poor learning outcomes across India.

And as the driving force behind the largest household survey of children conducted in India by citizens' groups -- carried out by more than 25,000 volunteers and covering over 700,000 children in 15,000 villages every year -- Banerji is a force to reckoned with in the education sector today.

Today, however, she declares she is happy to play hookey over high tea. So we order some Makaibari tea, and settle down for a chat as we wait for some English teatime goodies to arrive.

Banerji starts by saying that the overwhelming response to the latest ASER survey has taken her somewhat by surprise. "Usually, we survey primary school students, and I suspect people are more forgiving of low learning outcomes among young children," she says.

This time, however, since they decided to survey the age group of 14 to 18, the results shocked many and challenged the notion of the 'demographic dividend' that India is believed to have.

Over sips of tea, Banerji explains to me why regular on-the-ground impact assessment of development programmes is crucial.

"Since Pratham was born in 2002, we found ourselves enabling students to 'catch up' with their academic level," she says. "We started conducting village-level assessments to gauge the impact of schooling on learning outcomes, and to demonstrate to village pradhans, headmasters and parents that their children needed help."

When Banerji and her cohorts shared the results of these surveys with the local community, they realised that often, parents didn't even know what learning outcomes to expect from their children at specific scholastic levels.

There were two important takeaways from these early assessments. "We found that faced with the findings of our surveys, parents and teachers became more receptive to the idea of seeking help from organisations like Pratham to improve their learning outcomes," she says.

"Also, we found that even the most cynical pradhan we met, admitted that s/he'd be thrilled if every child in their village could read and write..."

Just then, a three-tiered tray of scones, tarts and wafer-thin sandwiches arrives at the table, causing a brief suspension of conversation. As she enthusiastically lathers cream and berry preserve on a scone, I tell her we share a common alma mater in the Delhi School of Economics.

The preserve drops out of her scone as she laughs uproariously: "I'm actually a D-School dropout!"

Banerji went to Oxford within a year of joining the two-year MA programme at D-School, but the experience taught her something useful. "I realised that I was better suited for an interdisciplinary, practical approach rather than a purely academic one," says she.

Her interest in education developed when she volunteered at a Chicago public school during her PhD.

"After I started working, I'd take a month off every year to volunteer and study government schools in India," she says.

The pot of Makaibari tea is replenished, as if by invisible hands. We nibble on salmon sandwiches as she gives me a sense of what it is like to work in a sector that has shown so little real improvement over the years.

While enrolment rates in schools have risen substantially, the fact that so many students are nowhere near the level of the curriculum must be profoundly frustrating to her, I say.

She disagrees: "There's no such thing as a poor student -- only poor teaching and curriculum."

She avers that Pratham's standardised and easily replicable modules which are taught at the learning level of students rather than their scholastic level, have been proven to be highly effective.

In their 40-day learning camps, one of which I witnessed some years ago in Bhadohi (Uttar Pradesh), their impact has been significant: At the baseline, 59 per cent students could not even read simple words.

After attending the Pratham Learning Camps, 77 per cent of these students were able to read simple text fluently.

Although the sun has set, it is still lovely to sit outside. We ask for another pot of tea and more scones even as Banerji groans at the indulgence.

She checks the time and tells me that she has an early dinner date with her four-year-old granddaughter.

We have a little more time, she assures me, and launches into some of the key learnings from ASER reports from several Indian states.

For example, in UP, only seven per cent of the students surveyed in class three, were actually at the class three level.

In contrast, 50 per cent class three students in Himachal Pradesh are at the appropriate scholastic level.

"This has important implications for educational policy," says she.

In government school classrooms in UP, for example, where barely three out of 50 students can comprehend what is being taught, there is a crying need for bringing down the level of the curriculum.

"But the government, even parents, are too hung up on textbooks, exams and grades to understand this," says she.

Time and again, Banerji and the folks at Pratham have seen students struggling to cope with an advanced curriculum without having basic reading, writing and arithmetic skills.

"Imagine how profoundly frustrating school would be for such children..." she says soberly.

One finding which worries her no end is that although the majority of the students polled came from farming backgrounds, few were interested in studying agriculture.

The staff at the Tea Lounge has probably forgotten we are here; for who sits around having tea long after sun down?

I give up trying to catch the eye of someone, anyone, to present the bill to me, and focus on Banerji, who is giving me her recipe for improving the quality and impact of education in India.

"We often celebrate scholastic excellence while ignoring the majority of students who aren't there yet," she says. "It's time we celebrated the bottom."

So instead of curriculums and teachers that focus on the crème de la crème of the classroom, she suggests, schools should try to raise the level of the rest of the class.

"This would automatically shift their focus from the few who score above 90 per cent, to ensuring that the entire class scores over 60 per cent," she advocates.

Only when the learning outcomes improve will India be able to reap the demographic dividend of well-informed and educated youth entering its workforce.

And the simple pedagogy that Banerji and her cohorts at Pratham have developed demonstrates that this can be achieved with a minor change in direction.

Banerji dusts off the crumbs as she gets up to leave: "All said, I'm very optimistic about the future," says she.

"The children make me so."