The ISRO spy case is dead. And yet, not dead.
A revealing excerpt from J Rajasekharan Nair's Classified: Hidden Truths In The ISRO Spy Story. 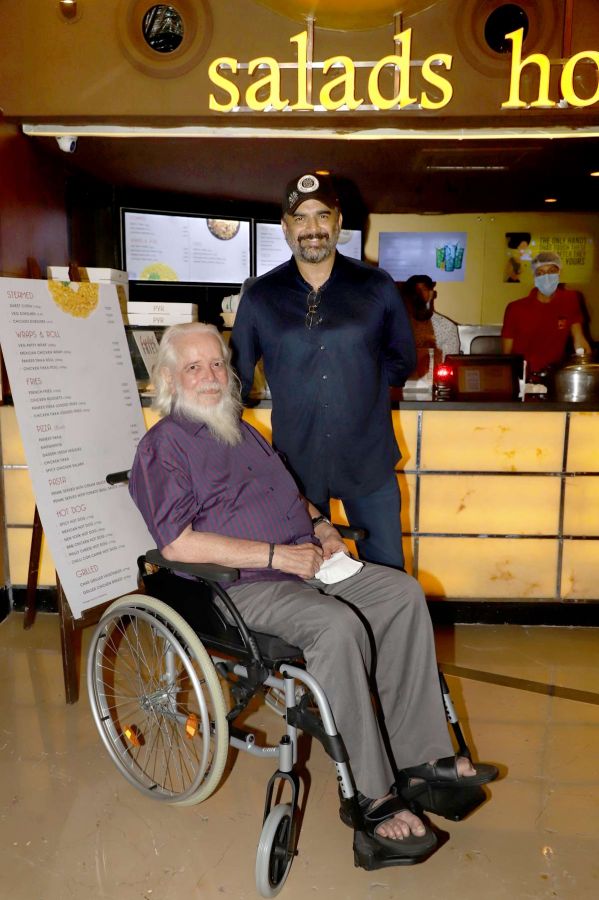 The case that appears to be a single case is a multi-layered and complex federation of mini-narratives in which timing of intersections, concinnity of melodramas, entry of the dramatis personae, and their eloquent silences were so neatly trimmed, timed, and fused that they unfolded like a single end to end espionage story.

So, there is the CIA that had been waiting for the opportune moment to derail India's cryogenic dreams by hook or crook; an inspector of the Kerala police who wanted to save his skin that he painted a semi-literate Maldivian woman as the spy who had come to destabilise India's defence organisations; a newspaper editor who wanted to take revenge on an arrogant politician and his blue-eyed IPS officer; a few top-level CIA moles in the Intelligence Bureau who planted what the CIA had fabricated; some top-ranking police officers of the Kerala police, including the DGP and a DIG, acting under the dictation of IB, thanks to its extra-constitutional authority nobody dares to question; the media-savvy A K Antony group in Kerala unit of the Congress party and its unscrupulous group managers who wanted to do away with one of Kerala's most popular leaders so that its idealist leader could occupy the chief minister's chair; and the gluttony media that regurgitated the rotten feeds fed to them by the police and the politicians at regular intervals.

It is difficult to see through the opaque and intriguing layers that make the espionage story.

The CBI that investigated the case for 18 months, a judiciary that heard the case many times at many levels over a period of 27 years, and a media that still regurgitate what is being fed to them without ever bothering to do a logical, intelligent and independent exploration of the whole episode -- all have jointly blindfolded people with misinformation, disinformation and distorted information.

It is in this context one has to view the contours of a counter-narrative being worked out to project the ISRO espionage case as the sad story of an innocent victim; camouflaging the hidden agenda with wrong orbits, misleading trajectories, hoax fuels and leaky tanks veneered with a glossy coat of pseudo patriotism. 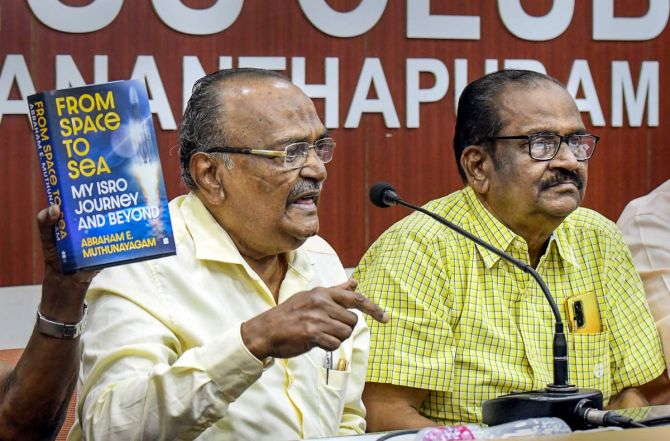 IMAGE: Former ISRO scientists A E Muthunayagam, right, and D Sasikumar address a press conference on the movie Rocketry: The Nambi Effect in Thiruvananthapuram, Wednesday, August 24, 2022, where they stated that Dr S Nambi Narayanan's claims that he is the father of many projects is false. Photograph: PTI Photo

Interestingly, the man who scripts the counter-narrative is S Nambi Narayanan, the old whipping boy of the media.

A comprehensive picture of the ISRO espionage case right from its genesis would have emerged had the Supreme Court ordered for a judicial enquiry covering the entire gamut of the issue and its complexities.

But the case filed by Nambi Narayanan had no such prayer in it. His grievance was that the case had a catastrophic effect on his service career and life.

It is worth noting that all these years, Nambi Narayanan had objected to a judicial enquiry into the whole issue, whenever such a prayer came up before Kerala high court in the form of a PIL.

Let us see the factuality behind Nambi Narayanan's case that Siby Mathews and other members of SIT inflicted a catastrophic effect on his service career and life.

Nambi Narayanan has no case that Siby Mathews or any member of the SIT had tortured him, physically or mentally, under whose custody he was for five days, and his interrogation by the SIT chief Siby Mathews 'just lasted for one-and-a-half minutes'.

Moreover, the main accusation of CBI against Siby Mathews in its confidential letter to the chief secretary, government of Kerala is that Siby Mathews 'left the entire investigation to IB, surrendering his duties.'

UO note no 303/DIB/DESP/ 94and UO note no 9/ESP/(U)94(3)-11-309 sent by the Director, Intelligence Bureay, to the Cabinet secretary and home minister, Government of India, make it clear that the IB was directing the Kerala police in the investigation of the espionage case.

In its confidential letter addressed to the secretary, ministry of home affairs, Government of India, wherein CBI details the misdeeds of the IB officials, CBI states, 'IB tortured/ill-treated... Nambi Narayanan... and was given medical treatment on 3 December 1994, which is indicative of the torture'. 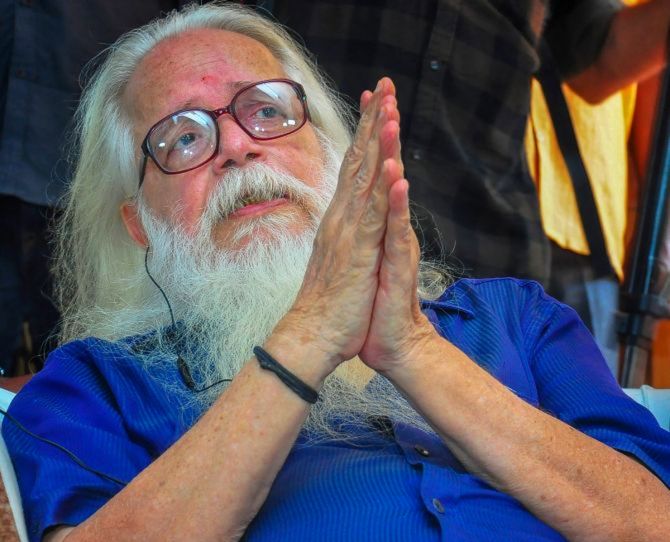 '...facts show that the aforesaid IB officials comprising the team enquiring into the ISRO case acted in an unprofessional manner and were privy to the arrest of six innocent persons, thereby causing them immense mental and physical agony ...

'At the IB HQ, the UO notes referred to herein were prepared based on these interrogation reports and without verification, leading to serious complications including casting doubts on the integrity of two top ISRO scientists who were responsible for developing the PSLV project and launching our country into space.'

The note further states R B Sreekumar, deputy director, State Intelligence Bureau, Thiruvananthapuram, and a member of the IB team that interrogated the accused, 'admitted that IB does not have the legal authority to examine the accused when they are in the custody of the police authority.'

Even then, Nambi Narayanan has no case against the IB officials!

He invoked the names of one or two IB officers only once, in 2000, when he filed a suit, before the sub court, Thiruvananthapuram, seeking damages to the tune of Rs 1 crore.

Nambi Narayanan withdrew the suit, unconditionally, agreeing to no further claim against any of the defendants and that 'no personal liability can be fixed on the officials accused of falsely implicating him.'

It is intriguing that he won't make any move against the IB officers who tortured him; would get impleaded in any petition for a judicial enquiry in the matter and would argue against it (He did it twice before the Kerala high court), and wants legal action only against certain selected SIT members of the Kerala police under whose custody he was only for five days; against whom he has no case of inflicting torture on him, and who interrogated him only for 'one and a half minutes.'

Turning a blind eye towards IB is a calculated approach to ensure no enquiry should go beyond the scope of the SIT members of the Kerala police because an enquiry into the activities of the IB, especially against the top brass, he fears, would end up in opening the can of worms; something he is worried about since the can has a worm that would narrate the story of a failed reverse espionage in which he had a lead role.

He doesn't want it to happen. He wants the truth to rise only up to that level where he is safe in his comfort zone.

Let us see how he paints his picture in the public domain.

The SLP filed by Nambi Narayanan before the Supreme Court reads:

It is urged by the appellant that the prosecution launched against him by Kerala police was malicious on account of two reasons, the first being that the said prosecution had a catastrophic effect on his service career as a leading and renowned scientist at ISRO thereby smothering his career, life span, savings, honour, academic work as well as self-esteem and consequently resulting in total devastation of the peace of his entire family which is an ineffaceable individual loss, and the second, the irreparable and irremediable loss and setback caused to the technological advancement in Space Research in India.

What Nambi Narayanan had stated before the Supreme Court in his SLP is a mixture of truths, lies, and contrived truths.

The statement that the spy case had affected his life and 'consequently resulting in total devastation of the peace of (Nambi Narayanan's) entire family which is an ineffaceable individual loss' is a painful truth.

His claim that the case had a 'catastrophic effect on his service career' is a blatant lie.

His statement that the case had caused 'irreparable and irremediable loss and setback caused to the technological advancement in Space Research in India' is a contrived truth. 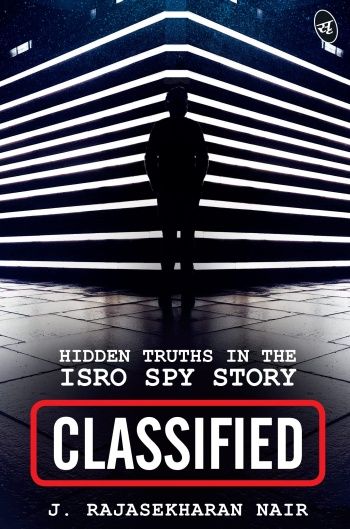 Let us examine the lie and contrived truth in his SLP.

The claim that the espionage case 'inflicted a catastrophic effect on his service career' is factually incorrect.

Reason: Nambi Narayanan had applied for retirement under the Voluntary Retirement Scheme (VRS) 29 days before he was arrested on 30 November 1994.

The VRS application dated 1 November 1994, reads: Due to personal reasons, I wish to seek voluntary retirement from ISRO. I shall be extremely grateful, if Chairman ISRO/ Secretary, DOS can condone and waive the retirement of three months notice and relieve me with effect from 11 November 1994.

In the letter addressed ISRO chairman/Secretary, department of space, there is a handwritten portion that reads: 'Incidentally, you may kindly recall my discussion with you during August 94, my interest to seek voluntary retirement after the PSLV launch, and you had kindly agreed to my request to relieve me after the launch.'

And he had reasons for opting for VRS that had nothing, whatsoever, to do with the espionage case.

In his own words, 'In April 1994, K Kasturirangan assumed office as the Chairman of ISRO. I was the Deputy Director of VSSC. Our Director was the senior-most person eligible for the post of Chairman, and I had expected a promotion as Director. I had informed the Chairman in advance that I will opt for VRS if I don't get the promotion.'

In other words, Nambi Narayanan had decided to quit ISRO in April 1994 if he doesn't get promoted as Director. His decision to quit ISRO was personal and professional.

Moreover, the case didn't 'smother' his career because he was promoted to Director, Advanced Technology and Planning, and was posted in ISRO Head Office in Bangalore, reporting directly to Chairman, ISRO.

Does he mean the case had spoiled his chances of becoming the Chairman, ISRO?

But then, how could he have dreamed of becoming the Chairman, ISRO, after opting for VRS on 1 November 1994?

This edited excerpt from Classified: Hidden Truths In The ISRO Spy Story by J Rajasekharan Nair has been used with the kind permission of the publishers, Srishti Publishers & Distributors.