'All these people want is a secure home where they can live and earn in peace.'
Geetanjali Krishna reports.

The tiny whitewashed temple rises up in the desert, its red pennant fluttering in the sky, surrounded by scores of mud and thatch houses. From one of them, a young girl in a traditional Rajasthani ghagra peeps out.

She is nursing an infant and has a toddler in tow. She looks like an underage bride and a far too young mother but issues of premature marriage and motherhood seem inconsequential compared to what she is facing.

The girl belongs to one of the 170 households in Aanganwa village outside Jodhpur. 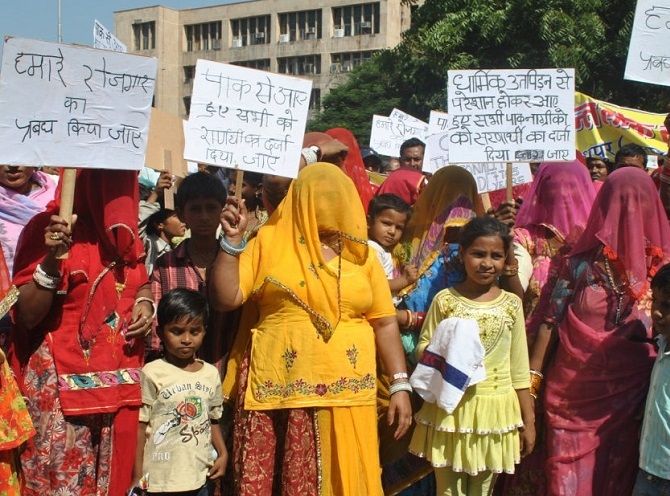 According to the Jodhpur-based Universal Just Action Society (http://slsujas.org), which is advocating on behalf of this community, Rajasthan has 1,000 such settlements, big and small and mostly organised by caste. There are a dozen around Jodhpur alone.

Fleeing to safety, they are dismayed to find mistrust. The wait for long term visas, identity documents, and jobs for the 5,000 people in the Aanganwa camp is endless.

"These people have ended up neither belonging to Pakistan nor to India," said Hindu Singh Sodha, founder, UJAS.

Under the United Nations Human Rights Commission's 1951 Refugee Convention, an individual with a well-founded fear of being persecuted for reasons of race, religion, or nationality is deemed a refugee.

"Pakistani Hindus fleeing to India meet this criterion, but India is not a signatory to this convention or to its 1967 protocol which stipulates the rights and services that the host country must provide refugees," said Sodha.

Although India offers assistance to asylum seekers from Afghanistan, Sri Lanka, Myanmar, Congo, Eritrea, Iran, Iraq, Somalia and Sudan (albeit on a somewhat ad hoc basis), the same option is not extended to those from Pakistan.

A Pakistani Hindu immigrant who has been lobbying on this issue since 1999, Sodha is weary of hearing the same prejudice voiced by government officials and members of the public alike: What if some of them turn out to be members of Pakistan's intelligence service, the ISI?

"To this, I reply that to date, there is no official record of any Pakistani immigrant being arrested as a spy. All these people want is a secure home where they can live and earn in peace," he said.

The stories of the people in the spotless Aanganwa camp illustrate the shortcomings of India's policies towards immigrants and refugees.

Amir Khan (his family gave him a Muslim name in the hope that he would be less conspicuous) came to India from Sindh in Pakistan two years ago on a 15-day pilgrim visa.

His long-term visa has not come through and he has been in limbo at Aanganwa. His brother Daya Ram arrived here three weeks ago after having paid about Rs 20,000 as 'agent fees'.

"When agents know a person doesn't have a proper visa, they charge huge amounts of money to smuggle people in," said Khan. "Most of us can't afford this kind of money, but we can't afford to live in Pakistan either. So, we're forced to bring our family here in stages, as and when we can afford the passage."

Eight months ago, Dinanath arrived in Aanganwa with his wife and three school-going children. "I'm also waiting for long-term visas for my family. Our pilgrim visa expired ages back," he said.

Like most other able-bodied men in the camp, Dinanath works as a daily wage labourer. "This is the only way we can feed our families," he said.

His children are enrolled in school, but the authorities now want to see their Aadhaar cards in order to let them continue their education.

"I don't even have a valid visa, how do they expect me to get Aadhaar cards made?" he asked.

The women in the camp, heavily veiled and shy, have a different set of problems. They are being married off at an extremely young age because their families fear for their honour, given that they live in open camps and settlements.

Owing to the absence of healthcare and education, most women bear multiple children which impacts their health.

Since the community is largely unmonitored, no statistics are available but voluntary health worker Manisha Chouhan sees what happens for herself.

"The Aanganwa camp is so remote that ambulances can't reach there. Most deliver babies outside of hospitals and maternal and infant mortality rates are high," she said.

The immediate need for the nearly 5,000 people like Khan without any valid papers is to get their visas extended. "Till then, we'll remain almost as vulnerable here as we were back in Sindh," he said.

Estimates suggest there are about 500,000 Pakistani Hindu refugees across Rajasthan, including those with valid visas, citizenship documents, and those born after their families settled in India.

About 70 per cent of them have entered India on 15-day pilgrim visas and only a few have managed to have them extended.

In 2016, the ministry of home affairs considered a proposal to reduce the fees for registration as citizens of India from Rs 15,000 to Rs 100 and simplify the procedure.

Little has happened and citizenship remains a mirage. Since 1997, only about 13,000 people in Rajasthan have been granted citizenship.

In the interim, UJAS has connected a men's shirt-making factory with the women in Aanganwa as the first step in their economic empowerment.

Murari, who has borne three children in three years of living in India, is now earning about Rs 350 a day doing this work.

Also on the anvil is a 'craft cluster' because all the women are skilled at needlework, traditional patchwork, and embroidery.

In addition, UJAS ensures that all the children go to school and receive regular health checkups.

These efforts to give beleaguered immigrants a sense of belonging and normalcy are critical from the humanitarian perspective.

There is, however, another equally compelling reason for acting in this way, as a 2017 study by the British counter-extremism think tank Quilliam suggested.

After looking at refugee centers in Germany, it found that some had been infiltrated by extremists to radicalise disillusioned new arrivals already suffering from 'a lack of belief in the host country.'

Similarly, critics argue that US President Donald J Trump's latest ban on refugees from mostly Muslim nations could be used as propaganda by Islamic State to gain more recruits.

Khan recalls how his grandfather came from Banaskantha in Gujarat. Growing up in Pakistan, he always felt that India was also his homeland.

"Imagine how I feel to be treated like a pariah here."

He looked across at the whitewashed shrine erected by earlier migrants. "She's our Hinglaj Mata, the most powerful Hindu deity who resides in the mountains of Baluchistan. We've brought her to India with us. Now, there's no going back..."

All the names in this report have been changed.