Vaihayasi Pande Daniel glances at the life and political career of Alexey Navalny who has been banned from challenging Vladimir Putin in Russia's presidential election. 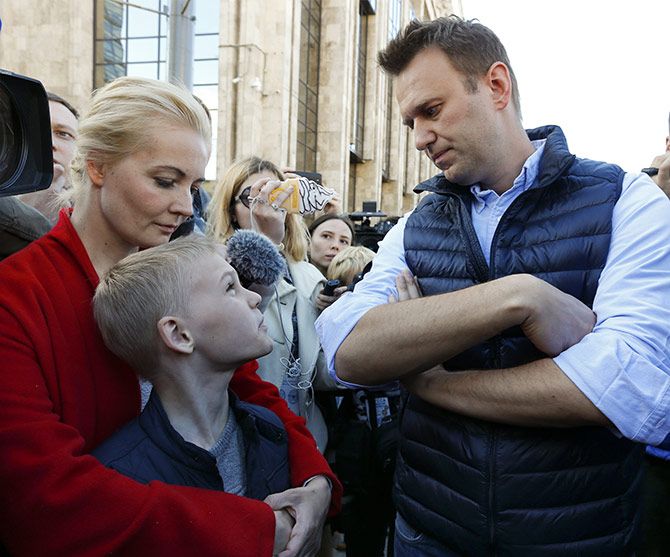 IMAGE: Alexey Navalny -- seen here with his wife Yulia and son Zahar -- at a protest against the decision to demolish five-storey houses from the Soviet era in Moscow. Photograph: Sergei Karpukhin/Reuters

Alexey Navalny stands 6' 2" plus in his socks.

In contrast, Vladmir Putin, the very macho Russian president and former spy, is 5' 7".

The disparity in height may be just one of the things Putin dislikes about Navalny.

The Russian leader thinks Navalny is an irksome thorn in his political flesh, which is why the nation's election commission banned Navalny from contesting the March 2018 presidential election just 24 hours after he had declared his candidature.

Who then is this man the most powerful leader in the Kremlin since Leonid Brezhnev fears? 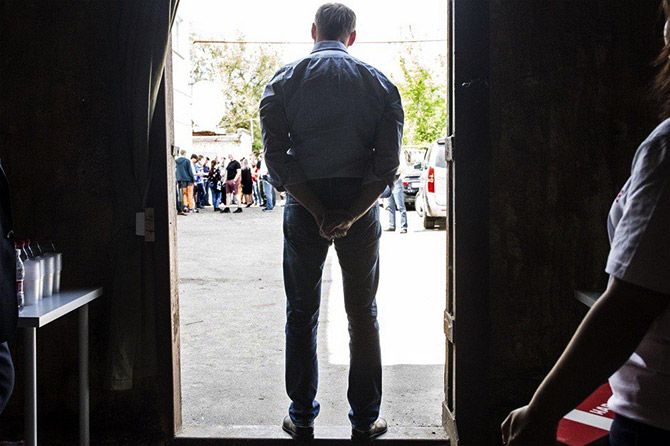 Married to his college sweetheart, economist Yulia, Navalny does quite a bit better in the looks and, of course, charisma department as well, being a rather eloquent speaker and a popular anti-regime hero.

By some accounts, this street-protest champ has generated more admiration and following in Russia than even Boris Yeltsin who climbed a tank to bring down those trying to depose then Soviet leader Mikhail Gorbachov in August 1991.

On Christmas Eve, December 24, 2017, 742 Russians -- he needed at least 500 such endorsements -- nominated Navalny to contest the Russian presidential election in March.

24 hours later, the Russian election commission declared that Navalny was ineligible to contest the election because he was convicted of fraud.

Three years ago, Navalny was convicted of fraud (apparently a dubious charge slapped on him by the Kremlin) and Russian election law forbids anyone with a criminal record from contesting an election.

Of course, the conviction could always have been quashed (anything is possible on Putin's watch), but that was never going to happen.

Vladmir Putin despises Alexey Navalny too much to grant him a presidential pardon.

Navalny has now called a boycott of the presidential election, but unless he dramatically raises the stakes, the challenger is already fighting a losing cause. 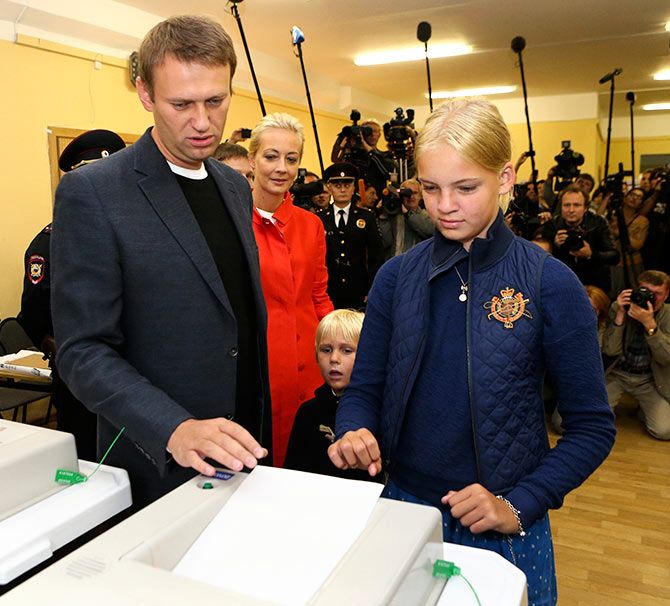 IMAGE: Navalny, left, accompanied by Yulia, second from left, and children Dasha and Zahar, casts his vote at a polling station in Moscow in 2013.
Navalny faced off against a Putin ally in a Moscow mayoral election with high stakes for both Putin and his foes. Photograph: Sergei Karpukhin/Reuters

A native of Obninsk, on the banks of the Protva river, about 100 km from Moscow, Navalny, who was once a Yale Fellow, is a lawyer by trade.

His parents own a wicker factory outside Moscow. His mother was an economist. His father was once an army officer and Navalny moved around quite a bit while growing up.

The family spent summers in the Ukraine with his paternal grandparents till the 1986 nuclear catastrophe in Chernobyl which apparently affected Navalny's emotional life.

About his childhood, he said, 'I remember life in Soviet times pretty well. I associate it with forever standing in a queue to buy milk despite the fact that I lived in military bases, where the shortages were not as bad as in the rest of the country'.

He was an average student, his mother told the New Yorker magazine, but he believed in telling his teachers 'what he thought of them'.

He met Yulia on a holiday in Turkey. She supports him in his work and they have a daughter Dasha and a son Zahar, and live frugally in a flat in a distant suburb of Moscow.

The family are big fans of The Simpsons. Navalny loves Russian black bread and cites that as a major reason for not going into exile like countless Putin opponents have done.

He calls himself a believer, although he was an atheist till recently, and says he likes being a Christian and a member of the Orthodox Church.

The lawyer earns his keep through his small corporate legal firm where he does just enough work to support the family. The rest of his time is devoted to fighting corruption and politics. 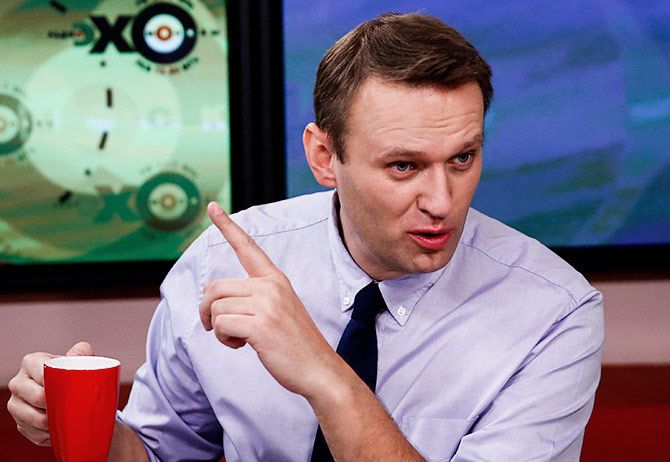 The founder of the Democratic Alternative movement, Navalny became vice chairman of the liberal party Yabloko, but was expelled for 'nationalistic activities'.

His allegedly neo-Nazi, anti-migrant and racist tendencies have often come up for discussion and there is an unverifiable picture on the Internet showing a Hitler tattoo on his chest.

In 2011 he started up the Anti-Corruption Foundation called FBK. His crusading was the real start to better visibility and his political career. 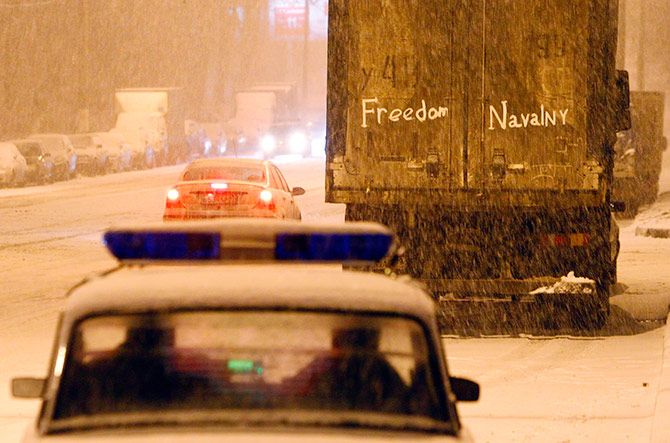 Navalny gained prominence for representing minority shareholders like himself (he purchased tiny amounts of shares worth $10,000 in umpteen companies) while challenging powerful Russian corporations like Rosneft, Surgutneftegaz, Gazprom, Transneft Bank, VTB and Sberbank.

He was responsible too for coercing Russian companies into reveal more financial information to the public and their shareholders.

In his battle against corruption he sued dishonest managers of many conglomerates.

He started up parallel projects to examine the transparency of government procurement, potholes in roads and the efficiency of airports that got him a place on Aeroflot's board. Aeroflot is to Russia what Air India is to this country. 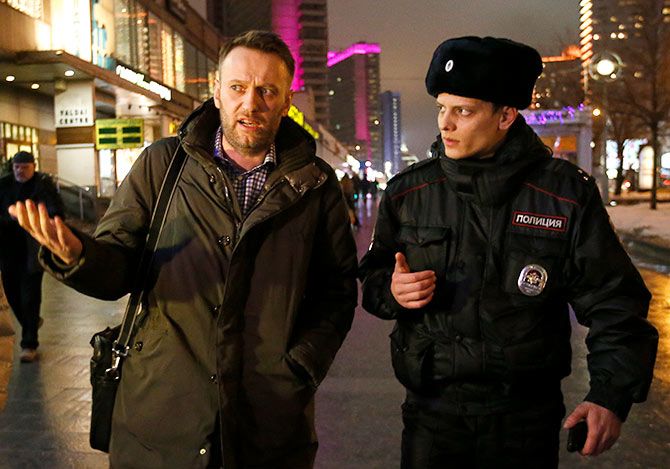 IMAGE: Navalny speaks to a policeman before being detained in 2015 after he visited a radio station. Photograph: Maxim Zmeyev/Reuters

He cut his teeth in electoral politics when he ran for Moscow's mayor in 2013 and came second with nearly one-third of the votes.

The race attracted worldwide attention, especially because Navalny's planks were democracy and corruption. 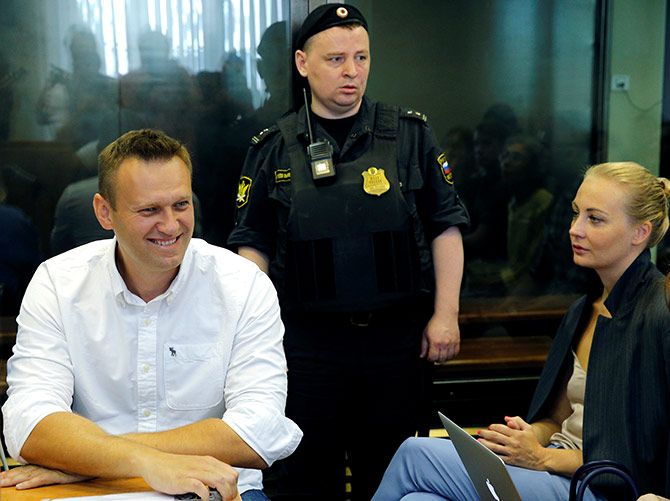 His manipulation of social media is said to be a reflection of his style and his strength. It pushed him to the forefront of Putin's opponents.

He has amassed hordes of mainly young followers with his acerbic, knockout posts that ridicule Putin's government and party.

His most famous punch was calling Putin's United Russia party a 'party of crooks and thieves.' 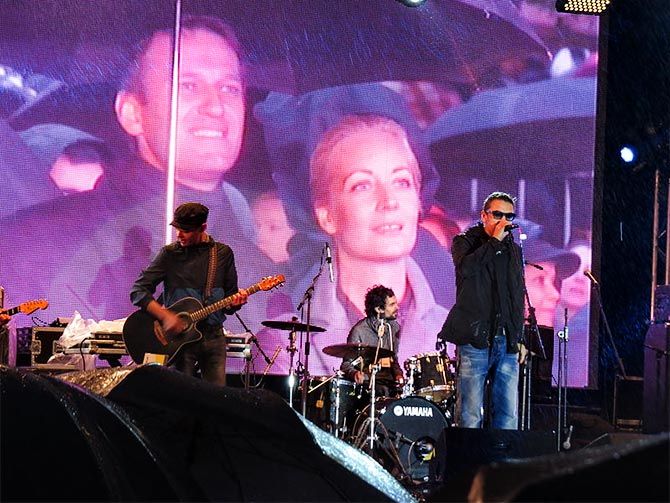 Even if the firebrand anti-Kremlin crusader had shaken off the fraud charge -- allegedly stuck on him by Putin that earned him a conviction -- Navalny had little chance of winning the March election.

Like fellow demagogues elsewhere, Putin enjoys huge support in a country that still worships Josef Stalin, a tyrant responsible for millions of deaths during his 29-year-old rule. 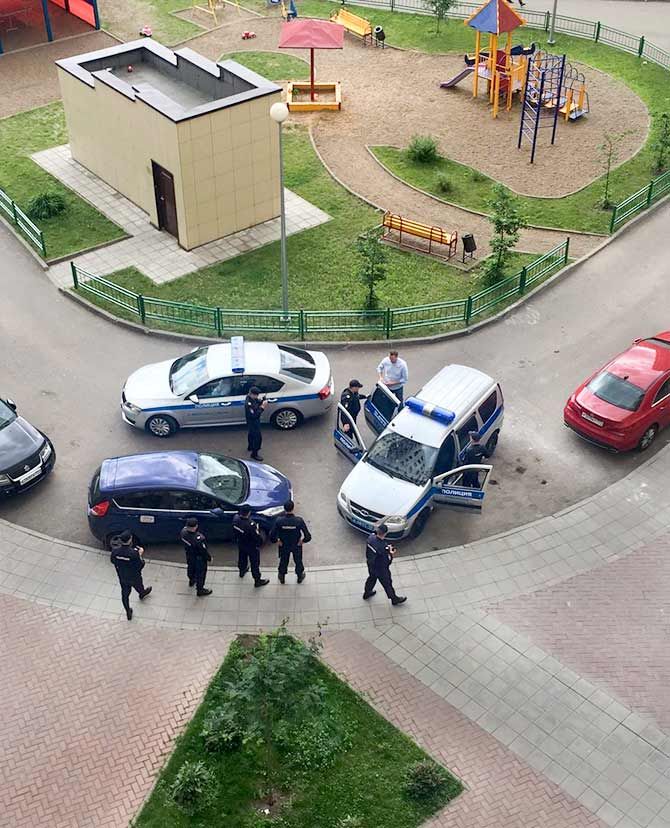 IMAGE: Navalny being arrested from his home before the June 12, 2017 protests that coincided with Russia Day. Photograph: Kind courtesy @navalny/Twitter

In March, Navalny harnessed his formidable online presence to rouse critics of the Putin regime to organise anti-Putin rallies.

A repeat of this, on a larger scale, happened on June 12, to coincide with Russia Day, when thousands participated in 100 rallies in several cities across Russia.

The biggest demonstrations were in Moscow along the Russian capital's shopping thoroughfare Tverskaya Street (once known as Gorky Street).

To contain the protests, the police arrested close to 2,000 people including Navalny. He was handed a 30-day sentence for illegally organising a public gathering.

Navalny never made it to the Tverskaya Street rally -- he was arrested leaving his home. He posted a picture of his arrest -- two cars and seven policemen -- on Twitter with the ironic message: 'Happy Russia Day!' 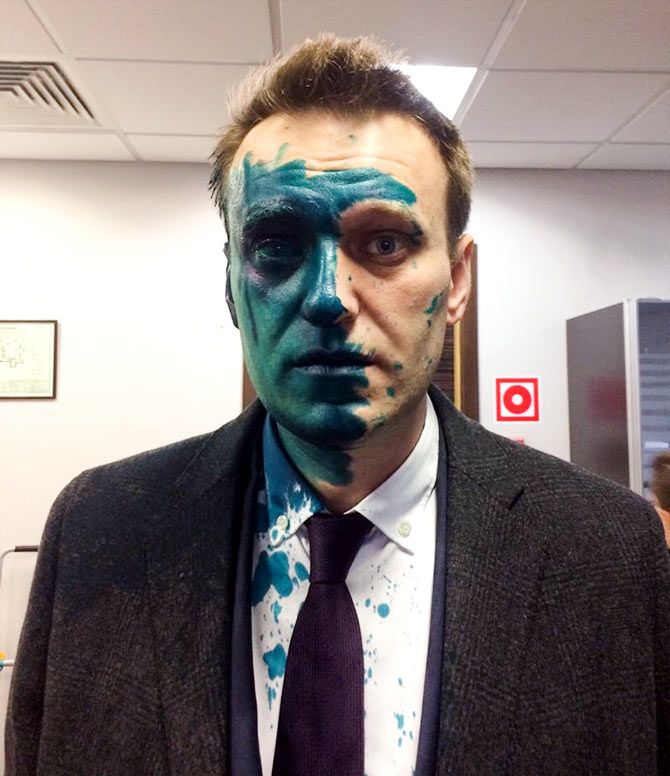 IMAGE: In April, Navalny was sprayed with a bright green liquid that damaged his right eye. Photograph: Kind courtesy @navalny/Twitter

Navalny is no stranger to prisons, courts and sentences. He received 15 days in jail in March for organising the protests.

His brother Oleg, a former postal service employee, is serving prison time for the second case in a sort of hostage-taking move to keep the pressure on Navalny.

Navalny was sentenced to house arrest, a sentence that does not exist in the Russian legal system, and began, right off, with nonchalance, to disregard it, much to the discomfort of his guards.

In April, Navalny was attacked and sprayed with a green paint-like liquid that damaged one of his eyes severely. 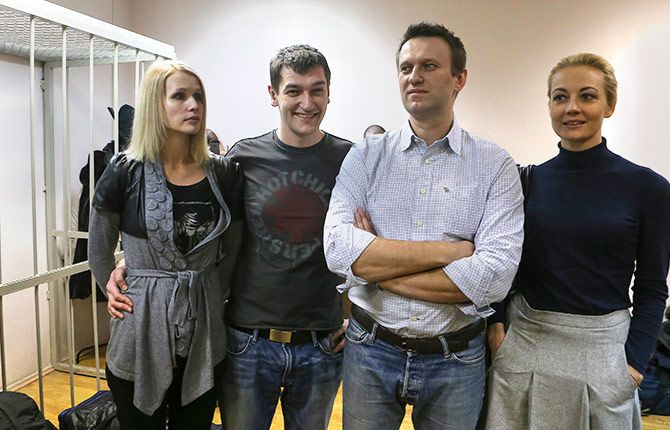 IMAGE: Navalny, second right, with Yulia, right, and his brother Oleg, second from left, with his wife Victoria at a court hearing in Moscow, December, 2014. Photograph: Sergei Karpukhin/Reuters

The prison sentence will no doubt resurrect itself if Navalny's proposed agitational challenge to Putin -- now that his election challenge has been snuffed out -- gets more strident and uncomfortable for the Russian leader.

It is not that Putin was ever worried about losing. Russia's current czar knows he cannot lose the March election.

He just could not tolerate someone as provocative and prominent as Alexey Navalny contesting the election against him, especially with the maverick's ability to denounce the Putin regime in language that ordinary Russians would be scared of using even in the security of their homes.