President Ram Nath Kovind presents the President's Colours to the Ladakh Scouts Regimental Centre today, August 21.
These are normally presented to units that distinguish themselves consistently over decades.
The Ladakh Scouts became a regular army regiment only in June 2001 after its stunning performance in the Kargil conflict, notes Ajai Shukla. 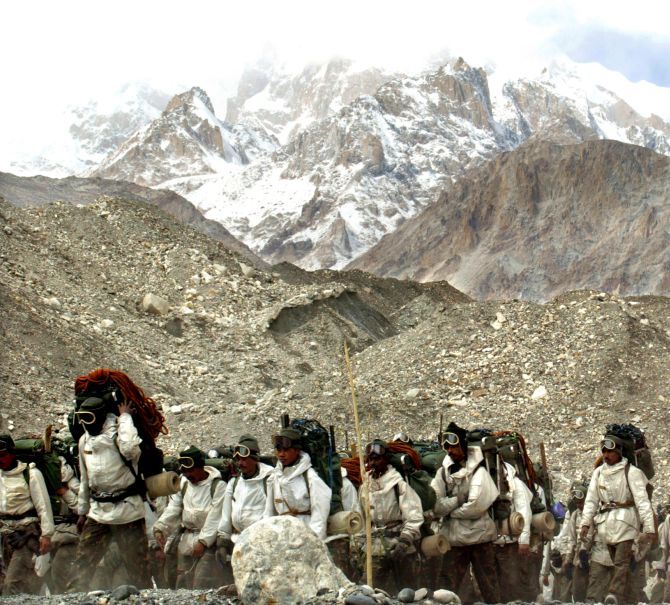 IMAGE: The Ladakh Scouts, the youngest army regiment, is a godsend as they are genetically conditioned for high altitudes, with physiological advantages like larger lungs and rarely suffer from mountain sickness.
Photograph: Pawel Kopczynski/Reuters

The dramatic air landing of two Indian infantry battalions in Srinagar in October 1947, which drove back Pakistani tribal raiders from the outskirts of the capital of Jammu and Kashmir, is the stuff legends are made of.

As the Indian Army built up troops in Kashmir, the raiders were driven back, and Baramula, Uri and Tithwal liberated.

But a similar, less known, crisis occurred in May 1948, when the capture of Kargil by tribal Lashkars left the routes to Leh open.

Defending Ladakh against the tribal hordes were just 33 men of the J-K state forces. Reinforcing the tiny Leh garrison were 20 volunteers, led by Lieutenant Colonel Prithi Singh: The legendary 'X Force' that dragged itself heroically over the wind-swept Zoji La pass.

But with the snows melting and passes opening, hundreds of Pakistani tribal fighters converged on Leh, driven by the promise of monasteries groaning with wealth, salacious dreams of unprotected women, and the belief that Ladakh's Buddhist men knew little of fighting.

'Cometh the hour, cometh the man,' it is said.

On May 13, 1948, as Lieutenant Colonel Prithi Singh raised the tricolour in Leh and called for volunteers to fight the invaders, the first hand to go up was that of Chewang Rinchen, a 17-year-old schoolboy from Nubra.

For the next two months, until the first Indian Army troops were airlifted to Leh and built up into a viable force, Rinchen and a band of youngsters that he formed into the Nubra Guards confronted and thwarted the battle-hardened tribals.

For his heroic defence of Ladakh and the leadership he displayed, Rinchen was appointed a junior commissioned officer in the Indian Army and awarded the Mahavir Chakra, the army's second highest gallantry award.

Not content with being the youngest-ever winner of that award, Rinchen went on to win a Sena Medal in the 1962 war with China; and then a second Mahavir Chakra in 1971 for capturing over 800 square kilometres of territory from Pakistan, including the strategically vital village of Turtok.

Eventually retiring as colonel, Rinchen is one of the army's greatest legends. 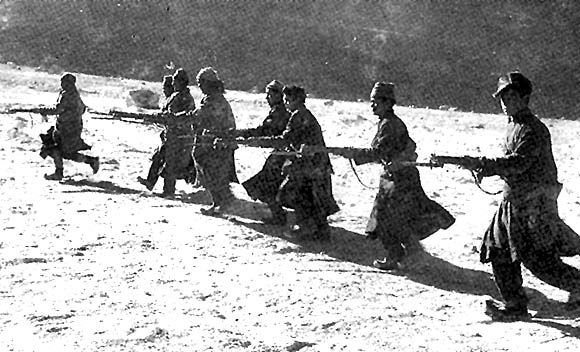 IMAGE: The Nubra Guards are the progenitors of today's Ladakh Scouts which became a regular army regiment in 2001.

Rinchen and the Nubra Guards are also the progenitors of today's Ladakh Scouts, a regiment so distinguished in war and peace that President Ram Nath Kovind will travel to Leh to present it the coveted President's Colours. These are normally presented to units that distinguish themselves consistently over decades.

The Ladakh Scouts, in contrast, became a regular army regiment only in June 2001 after its stunning performance in the Kargil conflict.

No sooner than the Pakistani intrusions across the Line of Control were detected in May 1999, the Ladakh Scouts swung into action, reconnoitring routes, fixing ropes and enabling the initial successes of regular Indian battalions.

The Ladakh Scouts were also instrumental in exposing the role of regular Pakistani soldiers in the intrusions, which Islamabad was flatly denying.

Embroiled in the fighting at Kargil, the Ladakh Scouts lost 31 men and were awarded 55 gallantry awards, more than any other army unit in per capita terms.

Major Sonam Wangchuk, who led his Ladakh Scouts men to the capture of Chorbat La, was awarded a Mahavir Chakra.

In recognition of their valour, the chief of army staff awarded the Ladakh Scouts the COAS Banner -- the only such award ever given.

The army quickly saw the benefit of converting the Ladakh Scouts into a full-fledged infantry group, on the lines of the Gorkhas, Dogras, Sikhs and others.

Unlike other infantry groups, which alternated between peacetime and field deployments, the Ladakh Scouts would remain in high-altitude field postings in the vicinity of their homes: The Kargil and Leh districts of Ladakh.

For an army that has so many soldiers committed on its Himalayan frontier, mountain men like the Ladakh Scouts are a godsend.

Regular army units, manned by plainsmen or mountain folk from lower altitudes, require up to a week of acclimatisation before they can survive at altitudes of 15,000 feet.

The Ladakhis, however, can be deployed above 15,000 feet without acclimatisation.

The Ladakh Scouts are also adept at operating 'self sustained' for up to 10 days in extreme altitudes -- that's only on supplies in their backpacks.

A display of this unique ability came in February 2016 when an army post called Sonam, almost 20,000 feet high on the Siachen Glacier, was buried by a collapsed ice wall along with 10 soldiers from the Madras Regiment who manned it.

With sensors indicating signs of life, survivors needed to be dug out quickly.

Ordinary soldiers were breathless at those heights, so the Ladakh Scouts were brought in, without acclimatisation, from an altitude of 12,000 feet -- something that would kill most soldiers. 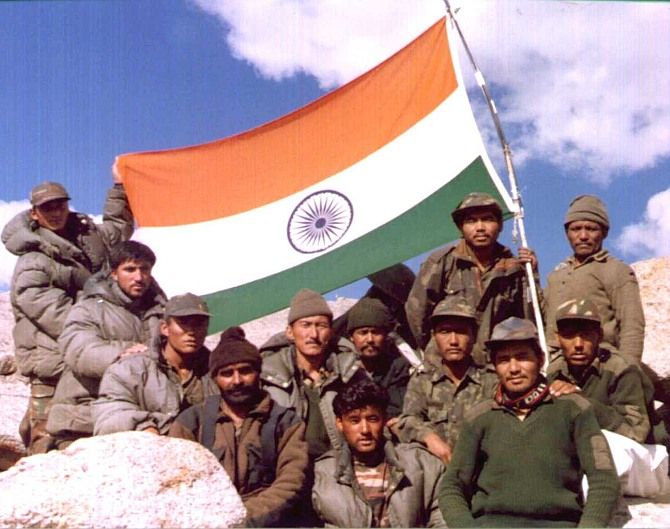 IMAGE: The Ladakh Scouts, victorious at Dog Hill, during the Kargil conflict in 1999.

Since Kargil, the Ladakh Scouts have been built up to five battalions, each one with some 850 soldiers.

At any time, two battalions are operationally deployed in extreme high altitudes, including one in the Siachen Glacier.

Two more are stationed in Ladakh, with just one battalion in a peace location in Chandimandir.

Seeing the value of these soldiers, there are plans to raise another two battalions.

With only a limited populace to recruit from, soldiers may also be drawn from Lahaul and Spiti, in Himachal Pradesh, which is also reputed for tough mountain soldiers.

At a recruiting rally at the Ladakh Scouts Regimental Centre, however, it does not seem as if the regiment is short of recruits.

Defying the cold that has us wrapped in parkas, a crowd of youngsters stands in their underwear, readying for a medical examination followed by a two-mile run.

The candidates are well-built, but short, which is not a deterrent since the army has relaxed height requirements for Ladakhis.

Mohammed Abdullah, a recruit from Phyang, near Leh, tells us frankly that young men in Ladakh have only two career choices: Joining the Ladakh Scouts or driving a taxi for tourists.

Another recruit, Thinless Norbu, from Chuchot village, tells us that soldiers are held in high esteem by local people, and most educated girls would choose to marry a Ladakh Scout.

Even so, the changing values of Ladakhi society are evident from the controversy over the memorial to Colonel Rinchen.

After he died in 1997, the spot in Leh where he was cremated was transformed into a public park. On his death anniversary, the army, administration officials and prominent citizens would lay wreaths in his memory.

Says one of the local officials, responding to a query on how local police in an entirely peaceful and crime-free district can be compared with a national hero like Rinchen: "Why should there be any comparison? After all, whenever anyone salutes the police memorial, they will also be saluting Colonel Rinchen." 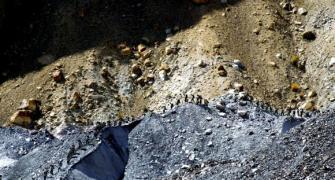 At battlefield 20,000 feet high, cold is the main killer 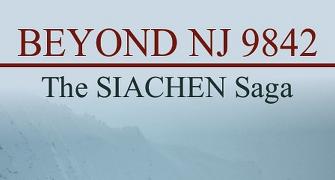 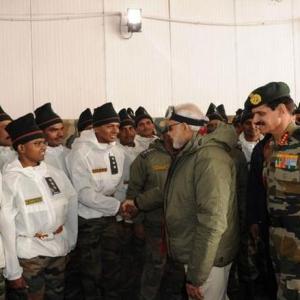 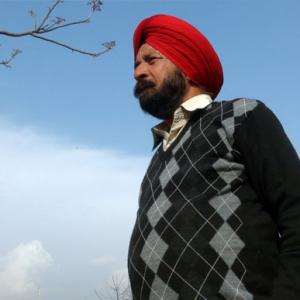