Captain Pradeep Shoury Arya is an Income Tax officer whose mission against terrorists in J&K won him the Shaurya Chakra.
The hero tells Rediff.com's Archana Masih about his life as a soldier at the border and as a civil servant in Mumbai. 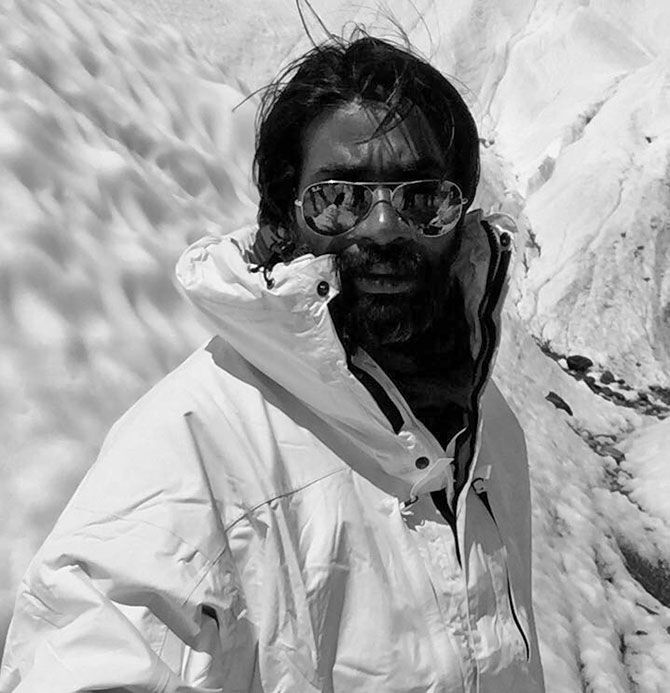 IMAGE: Captain Pradeep Shoury Arya at the Siachen Glacier.
The soldier eliminated terrorists in J&K in an operation by the Indian Army's Special Forces in May 2017.
He was decorated with the third highest award for gallantry on Republic Day.
Photographs: Kind courtesy, Captain Arya.

Captain Pradeep Shoury Arya is a taxman who can drop his income tax files and pick up a weapon with ease.

For the last three years, the soldier-taxman has spent more time on the border with Pakistan in Jammu and Kashmir than in his Mumbai office, where he serves as a high ranking bureaucrat in the Income Tax department.

Far from the IT files, Captain Arya built an intelligence network and contributed in tracking money laundering and flow of funds for terrorism in J&K. His devotion to duty fetched him the army chief's commendation.

Last year, he led a mission to stop Pakistani terrorists from entering into India in Jammu and Kashmir.

His display of valour and leadership in counter terrorism operations won him the Shaurya Chakra, the third highest award for gallantry on Republic Day.

The Shaurya Chakra made him the first Indian bureaucrat to win a medal for gallantry.

"I really did think why me because everyday at the border so many soldiers do so many things," Captain Arya says over the phone, at the end of a work day in Mumbai.

"I am glad I was one among them who put their lives on the line everyday. I was happy that the operation was successful, and we returned alive. Any other soldier in my place would have done the same." 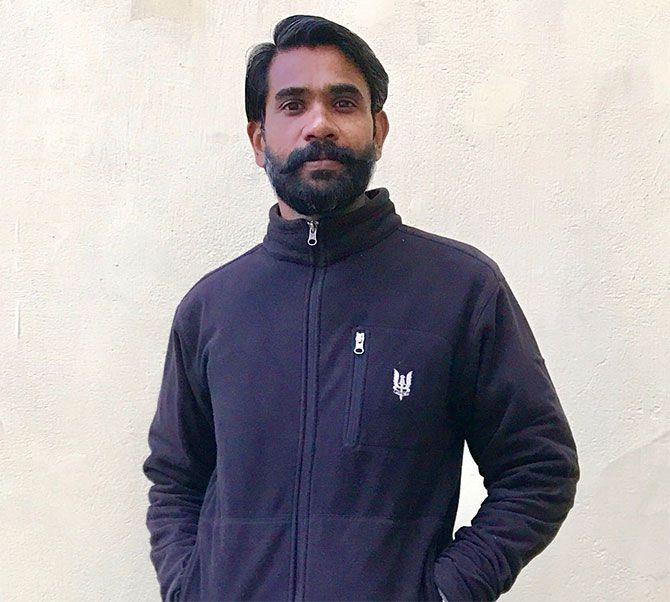 IMAGE: An Indian Revenue Service officer, Captain Arya is an additional commissioner for Income Tax, International Taxation. In the last three years, he has spent more time in J&K than with the I-T department.

On a moonless night in May last year, Captain Arya and his small band of men of the Special Forces, detected 4 to 6 terrorists in a jungle in the Baramulla district of J&K.

The soldiers stealthily moved ahead in the mined area to intercept the terrorists by a nullah. A firefight broke out.

If the terrorists had escaped, they would slip into India and strike mayhem.

Captain Arya and his men had to stop that.

'Risking his life and displaying inspirational combat leadership, he ran ahead from his concealed position, unmindful of his own safety and came directly in contact with the terrorists and eliminated them,' says the account of his actions that night.

The mission was a success. It was a night Captain Arya will never forget.

"For a soldier there is no end to what he is doing. One mission ends and a new mission begins," he says in a measured voice, giving a sense of what soldiers experience at the border day-to-day.

"There is a trust factor when you go into a mission. Before I even say something my buddy knows what I'm going to say and before he asks, I know what he wants me to do."

"This bonding is built over a period of time and helps in the success of any mission." 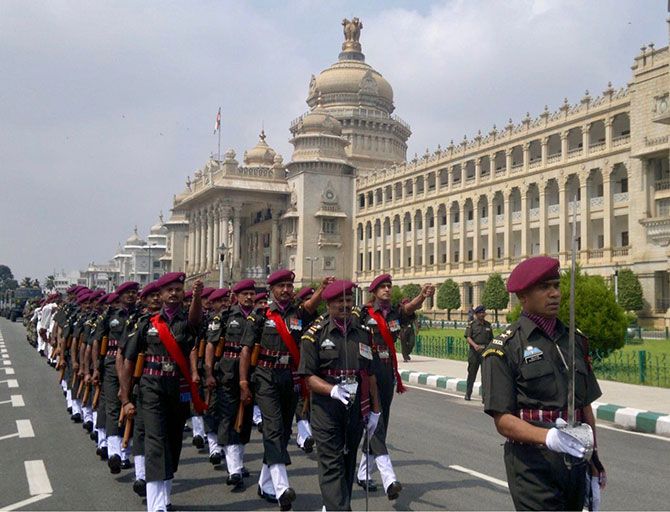 Pradeep Arya's journey to protecting India's border has been an unusual one.

He joined the IRS in 2004, but his love for the uniform made him join the Territorial Army in 2008.

All able bodied, gainfully employed, Indian citizens can join the Territorial Army. They are required to serve the Indian Army for two months each year.

After securing a no objection certificate from the I-T department, Captain Arya, who also has a commercial pilot's license, took a written exam for joining the Territorial Army.

He passed the Service Selection Board, cleared the medical, did a pre-commission training at the Deolali cantonment in Maharashtra and then joined the Indian Military Academy for three months training.

"An IMA cadet trains at the Academy for a year, if you look at our capsule, including pre-commission training, we also do nearly a year's training," he explains.

Usually two years are given to Territorial Army recruits to complete training because employers may not be able to spare them for a continuous period.

In Captain Arya's case, election duties in Karnataka and Nagaland prolonged his passing out from the Indian Military Academy to 2013.

In 2013, he also received an award from the President of India for best electoral practices. 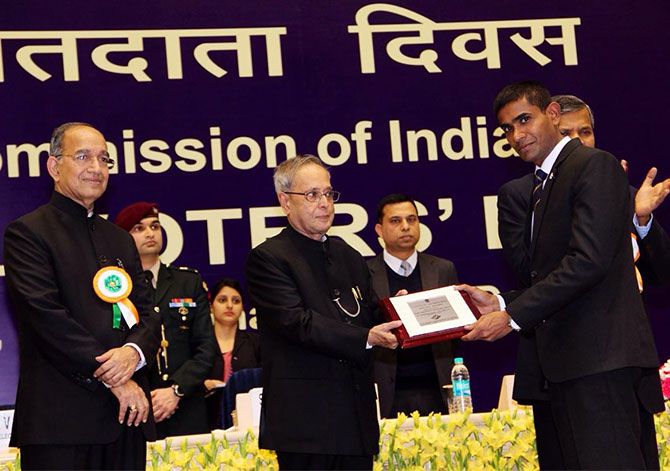 IMAGE: He receives the Best Electoral Practices National Award instituted by the Election Commission by then President Pranab Mukherjee in 2013.

"I carry a lot of the learnings from my job in the I-T department to the army and vice versa. I am the same person who is an officer at one time and a gentleman at another time," he laughs.

Back in his role as a bureaucrat, he says he is in regular touch with his men and will return to his unit whenever he is called.

"Camaraderie runs deep in the army. Often you are in a place where you only interact with these set of people and there is no civilisation beyond. The bonding increases naturally because they become your primary family, rather than the family that you have left behind."

He is not a full time-all day soldier, but says fellow soldiers have welcomed and accepted him whole heartedly.

"In the army they don't accept you as one of them just because you are part of civil services or IT guy. The honour among themselves is given only when you are like them. They know only a smart and good leader can march them into a war and lead them into victory," he says.

When he is away from the army, he makes sure he keeps himself physically fit by exercising and running on the streets of Mumbai every morning. IMAGE: Captain Arya holds a pilot's licence. He has master's degrees in sociology, business administration, law and taxation and a doctorate in voting behaviour.

Straddling both civilian and military life, Captain Arya has struck a fine balance and is comfortable in both. He not looking for a full time career in the army, but is happy to get the opportunity to pursue both his passions.

"This gives me the choice of doing exactly what I want as a civilian. It also gives me happiness and honour of being a part of the army."

In his avatar as an I-T commissioner in Mumbai and away from his wife and family in Bengaluru, he does not have much of a life beyond work.

Running and work are the only two sets of things he does, he reveals.

"When I am deep in an operation, I cut off myself from what I do in the I-T department, I can't think of the I-T files then," he laughs.

Yet life is not in danger in an Income Tax office like it is on the Line of Control?

"There, your life is in danger, here it is not so, but there are few things in life that we hold beyond ourselves – that is worth giving your life for like pride and honour."

"There, you are likely to lose your life, here you are not. That is the only difference," he says. 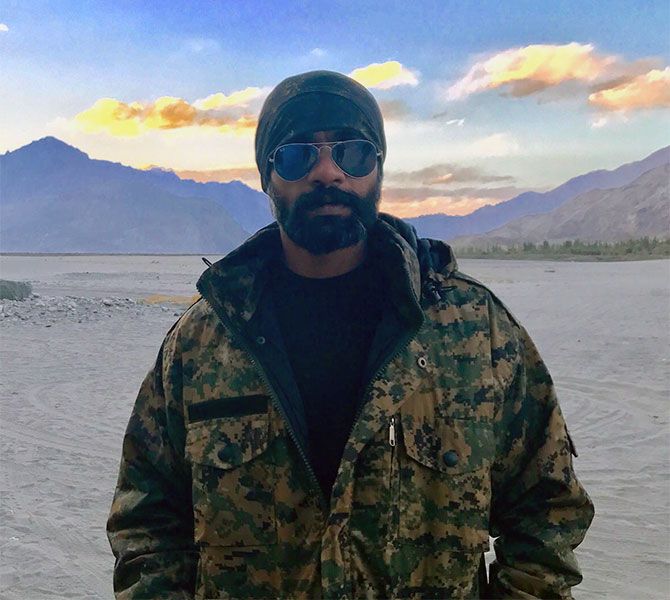 IMAGE: He received the army chief's commendation for contribution in investigation and tracking money laundering and flow of funds for terrorism in J&K.

His wife and daughters worry about his safety when he is away and are proud of him.

His only regret is that he doesn't get enough time with them even when he is back because he is posted with the I-T department in Mumbai.

"The small sacrifice they make allows me to pursue what I am doing," he says, adding that his little daughters are familiar with terms like 'ceasefire violation' and often call him to check when they watch reports of firing at the border.

Since he won the Shaurya Chakra, there have been several calls from working professionals asking how they can also serve in the armed forces.

"If you contribute to the army for two months in a years or two years in a whole lifetime, people would become more disciplined and know the price of the freedom they are enjoying," says Captain Arya.

"There is no point raising a flag on Republic Day and Independence Day and then forget about the soldier, who is in the line of fire everyday." 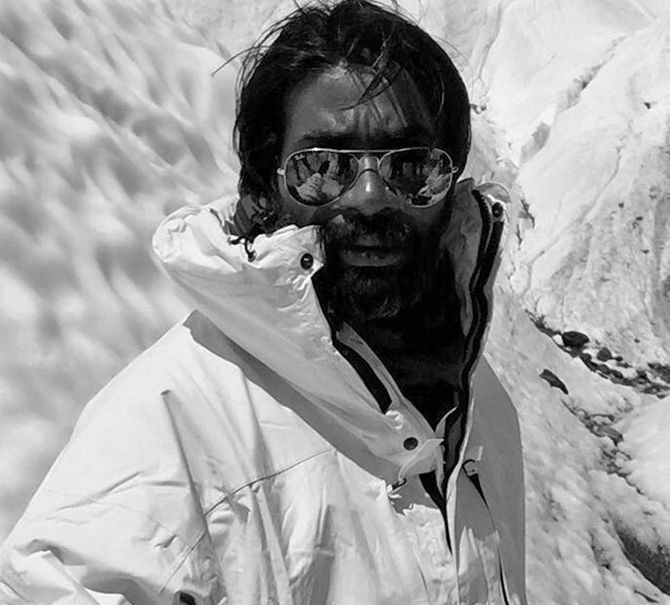