It was a surprise when an Indian NGO said it would announce the winner of the US presidential elections a day before E-Day.
Rediff.com's A Ganesh Nadar reports from Chennai.
Photographs: Sreeram Selvaraj 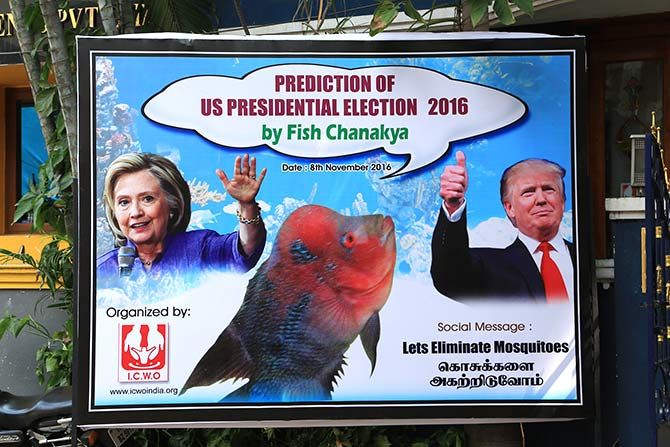 The Indian Welfare Community Organisation is a Chennai NGO that has been working with the LGBT community for over 20 years.

The founder of this organisation is the affable A J Hariharan, who always has the time to explain the problems faced by HIV affected people and sex workers and how his organisation helps them.

It came as a surprise when he said he would announce the winner of the US presidential elections a day before E-day.

Hariharan had an explanation for this. "Malaria," he says, "affects 2.7 million people in the world. We have to eliminate mosquitoes to save people from diseases like dengue, chikungunya and malaria."

If he had called for a press meet to discuss this cause, he says very few journalists would have turned up. So he opted for a "fishy prediction."

The hall at the Indian Welfare Community Organisation's second floor office was crowded with reporters and cameramen focusing on the fish from every possible angle.

The Flowerhorn Chichlid, a beautifully coloured ornamental aquarium fish, ignored all the attention. 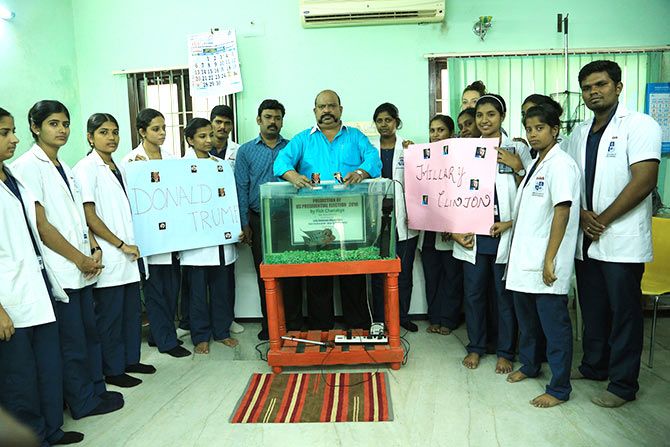 A bunch of college girls stood on either side of the fish tank, holding posters -- one for Republican candidate Donald Trump and one for Democratic candidate Hillary Clinton.

Students of medical sociology, they volunteer with IWCO. "We work in hospitals too. We are the bridge between the patient and the doctor," they explain.

Hariharan held two flags representing Clinton and Trump. He told us the flags would be lowered into the water. Whichever flag the fish touched first would be declared the winner.

"This is Chanakya the Second," he said. "The first fish died a few months ago and we got this one two weeks ago. Chanakya the First predicted 80 per cent of the World Cup football match results correctly and we are sure this one will get the US result correct."

After a long, dramatic, pause, the flags were lowered into the water.

Chanakya The Second circled the fish tank slowly. He took his time to consider the two new items introduced into his domain and then nibbled at Trump. 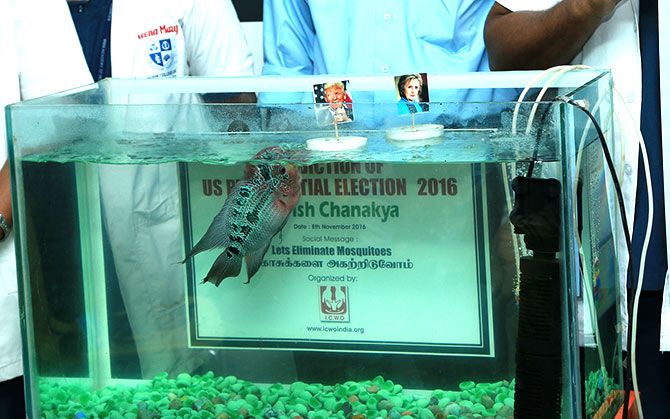 Trump was declared the winner.

Last week, in China, a monkey chose Trump as the next US president.

Olivia Derk, a German with a master's degree in psychology and a volunteer at ICWO, was clearly shocked. "I want Clinton to win. This election is not only important for the Americans, it will affect the whole world badly if Trump wins," she said.

"I hope he loses. I hope the fish is wrong."

Olivia, who has been with IWCO for a couple of months, is now learning Tamil. "I will be here till July and, without knowing Tamil, I cannot interact with or help people."

The doctors and nurses who work with the HIV infected people and the LGBT community are so busy that they can only talk about preventive measures and medication, she says. 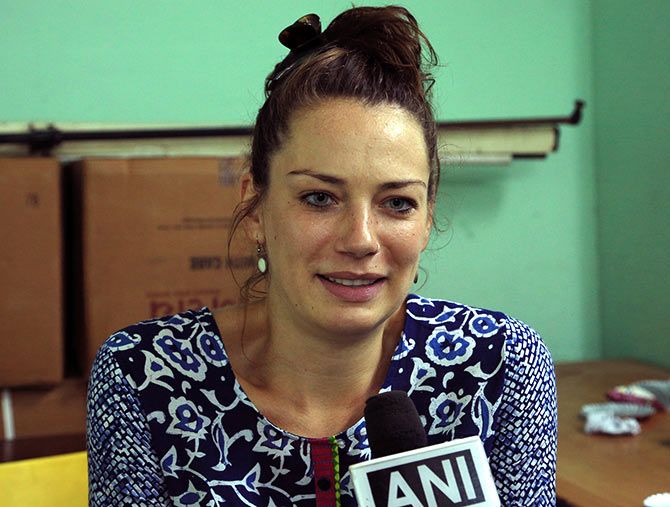 "There is one counsellor for hundreds of patients. What they are doing is correct, but not enough," Olivia points out. "We have to look at the mental and emotional status of the patient and guide them accordingly. That is what I want to do. I studied psychology to help people."

Some journalists were unhappy because they did not get a good photograph or video of the prediction.

So Hariharan repeated the process. And Chanakya the Second chose Trump again!