IMAGE: Volunteers provide meals to Indians heading to their villages inside a bus in Moradabad, March 28, 2020. Photograph: PTI Photo

On Saturday afternoon, Pradeep Kumar stood in front of the open trunk of his Eeco van metres from Noida's sector 37 bus stop.

As an unending stream of migrant workers passed him, most on foot, some on cycle rickshaws and even horse-drawn carts, the Uttar Pradesh government employee offered them chilled water, small packs of glucose biscuits, and a variety of chocolate biscuits for their children to choose from.

"I couldn't bear to see visuals on television of people walking hundreds of miles hungry, went to a shop in the morning and bought as many packs of biscuits as I could," Kumar, in his late 30s, said.

As he rearranged his mask, the Noida resident said he was following precautions but was quite sure he would not get coronavirus from the poor.

If the story of the first three days of the lockdown was of a lack of planning, chaos and forbearance millions of migrants displayed in the face of bureaucratic insensitivity and police brutality, day four had triggered empathy for them among the more fortunate.

Several like Kumar had halted their cars on the roads of Noida and Ghaziabad, Delhi's suburban cities that lead to the hinterland of Uttar Pradesh, offering migrant workers food and water.

In the national capital, as news spread that Uttar Pradesh state transport buses could take them closer home, all roads led to the Anand Vihar bus terminal on the Delhi-UP border.

People came from as far as Dwarka on the other side of the city, New Ashok Nagar, Lajpat Nagar to go to their hometowns or villages on the assurance of UP Chief Minister Yogi Adityanath that they will get transport back home.

Either on foot or in Delhi government-run buses, some of which did not charge any fare, not just men but increasing number of women with bags on their shoulders and children in tow, headed towards the terminal.

Several said they had stayed back for the first few days thinking there were no means to reach home and did not want to risk the safety of their womenfolk and children by walking hundreds of kilometres.

They are now reassured that the buses have started plying. They said they hoped they would return some day, but feared it may not be anytime soon.

"The word is the lockdown will extend until June and even beyond. How will I pay my rent and feed my family if my company were to throw me out?" asks Arun Singh, employed with a car showroom in the Patparganj industrial aqrea said.

Singh said he did not trust the appeal by the government that landlords should not charge rent, or companies should not sack employees.

"This is a disease spreading in cities," Singh said, adding how with a plot of family land back home in Saharanpur and a joint family awaiting him, he was confident that his wife and two children, all of whom queued up for UP state transport buses at Anand Vihar, would at least get two meals a day. IMAGE: Indians wait to board a bus to their villages at Kaushambi in Ghaziabad, March 28, 2020. Photograph: Manvender Vashist/PTI Photo

The initial horror of finding thousands in serpentine queues awaiting their turn to get on to the buses at the terminal was chastened by the dozens of samaritans distributing food and water to them, the restraint the cops showed in managing the surging crowds after facing severe criticism and bus drivers who stopped and waited in the middle of empty roads if they saw families hailing them.

At Anand Vihar terminal, dozens of nameless non-governmental organisations and individuals distributed food and water, but there was also a sizeable presence of Rashtriya Swayamsevak Sangh volunteers in their distinct black caps.

"My husband and I thought we needed to help people, so we are here distributing bananas," Sushila Saini said. She and her husband, salespeople with a private firm, said they had bought 10 kgs of bananas as that was all they could carry on their motorcycle. "It isn't much, but we plan to make a couple of more rounds," Saini said.

Let alone migrant workers jostling to clamber on to the buses, even the samaritans couldn't care less about social distancing.

"I am trying to take precautions, but you tell me how is it possible? Nothing will happen. A power greater than us watches over us," Ashfaq, ferrying people in an autorickshaw from riot-hit Mustafabad to the bus terminal, said.

The crisis has also been quite a leveller as not just millions of poor migrants, but even middle-class professionals found themselves queuing up.

Sanjay Singh, associated with Anand Book Publications in Vijayawada, had tried to book a flight from that city to Varanasi, the constituency that Prime Minister Narendra Damodardas Modi represents in the Lok Sabha, on May 23, but that was cancelled.

When he asked the airline staff if there was any ticket available, he was told the going rate was Rs 36,000.

"I told them I don't want to buy the aeroplane, but only a ticket," Singh said. He booked a ticket to Delhi, stayed in the company's office, which is near the bus terminal, but complained there was no food available. IMAGE: Indians wait for a bus to take them to their villages, March 28, 2020. Photograph: Vijay Verma/PTI Photo

On Saturday, the police relaxed the 'curfew' both in Noida as well as Delhi. Cops asked fewer questions at checkposts, allowed some taxis, autorickshaws and cycle rickshaws to ply and drop people at bus terminals and even facilitated samaritans and NGOs distribute food and water.

At the Anand Vihar terminal, the police tried not to use the baton indiscriminately, distributed food packets that had come for them, even sought help of people in plainclothes to manage the crowds or shouted instructions on loudspeakers.

"These are tough times, see how people are milling about. So much for social distancing," said a senior cop overseeing his subordinates and quietly imploring them to be careful in their use of force.

Meanwhile, a bus came for Etawa, with the conductor asking people to board the bus quickly. Several tried to get on it, causing a melee.

As dusk settled, the numbers at Anand Vihar surged exponentially. People said they would sit on the road the entire night, and hoped it wouldn’t rain as it had the previous night.

As samaritans across Delhi provided succour to thousands of migrants trudging on foot on the city's wide empty roads to the Anand Vihar bus terminal, those living in its remote rural areas and slums were quite forgotten. 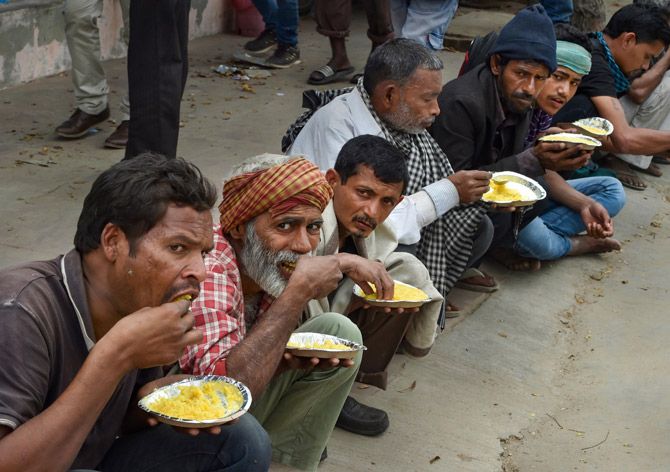 In Bhatti Mines Sanjay Colony, full of open deep abandoned mine pits, nearly 300 widows and their children have found little to eat for the past three days. Most of them belong to nomadic tribes whose families settled in the area a couple of generations back.

"Most are whose husbands have passed away because of silicosis from stone crushing, and they have children to take care of," Rati Singh, a social worker, said. She has been trying to arrange food for these families.

It isn't as if government and non-government organisations are not sending food, but it gets distributed on the roads leading up to the remote colony. "Here the problem isn't that of exodus, but of starvation," Rati Singh said.

"The sale of our earthen pots and pans is down, and there is no money to buy food," says Munna Lal, 65. These families, again from a nomadic tribe, have been living near the roadside for the past 25 years.

"This is the only home we know. We have nowhere to go. Please ask people to buy our pots and give us food," Shakuntala, 60, also a potter, said as her young grandsons said they would figure out something.

In Mustafabad and Maujpur in north east Delhi, which saw violent communal riots from February 24 to 26, dozens of young men, many of them in skullcaps, stand on the main road leading up to Anand Vihar bus terminal, distributing food, water and fruits to a continuous stream of people.

"This is the least we can do. This is a double whammy for several of these migrants who live in these colonies. Some of them had stayed back, or returned after the riots, but have to leave again," Haji Wahid, who runs a garment manufacturing unit in Katra Neel in Chandni Chowk, said.

The elderly Wahid and his band of young disciples say they are collecting food for victims of riots as well who were yet to find their bearings after their homes were burnt, and several local Hindus have also come forward with help.

Wahid and his jamaat members say in unison that it pains them deeply when Indian Muslims are asked to go to Pakistan or called anti-national.

"Offering namaz in a mosque is central to Islam,"Wahid said, "but we have stopped it because of this disease. We have done it for the people of this country, for you and I. We have adhered to what the government has said."