'Although India has a lot more to offer in terms of tourism other than the Taj, yet there is nothing compared to the Taj Mahal.'
Virendra Singh Rawat reports. 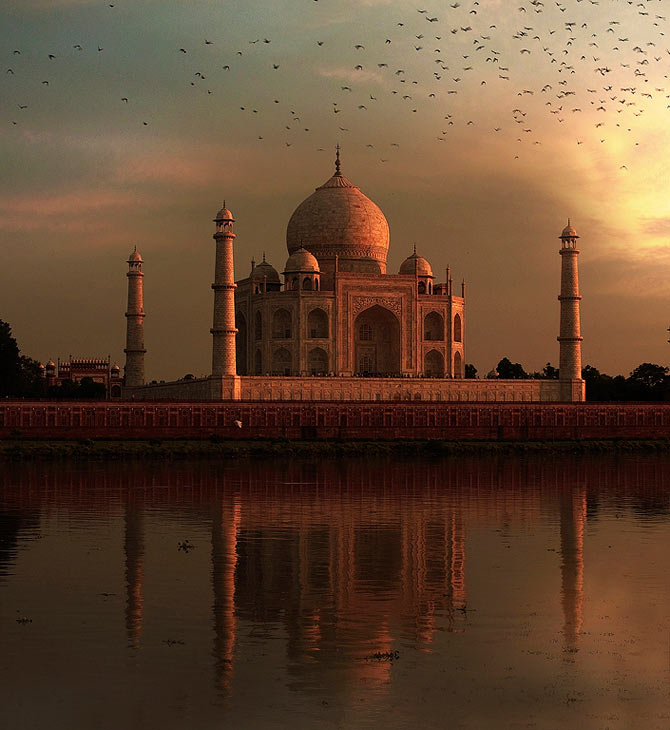 Two years after the Kargil war in 2001, India and Pakistan attempted to give peace and tranquillity in the region another chance.

On the invitation of then India prime minister Atal Bihari Vajpayee, then Pakistan president General Pervez Musharraf came to Agra for the first formal talks between the neighbours in years.

With the ivory-white marble domes of the Taj Mahal as the backdrop, the two leaders thrashed out vexed bilateral issues and agreed to meet again soon.

Later, General Musharraf visited the Taj Mahal along with his wife Sehba and posed for customary photographs outside the 17th century mausoleum complex.

Over the centuries, the Taj Mahal has been an enduring message of love and peace and among the country's most famous cultural exports globally.

Given the monument's global stature, when the Uttar Pradesh tourism department last month decided to drop the Taj from its publicity brochure, which waxed eloquent about the state's top tourist destinations, its decision drew scrutiny worldwide.

The omission not only made the booklet bereft of the state's most precious jewel, but set off a wave of acerbic criticism against the Yogi Adityanath government.

Many saw the move as a deliberate attempt to undermine the state's Muslim heritage: The Taj Mahal was built by Mughal emperor Shah Jahan in 1631.

Critics argued that the state government was stoking the narrative of the ruling Bharatiya Janata Party by promoting Hindu pilgrimage sites at the cost of other monuments.

Despite the barbs from politicians across the spectrum, the top echelons of the state bureaucracy, including the chief minister himself, justified the step, calling the controversy manufactured.

State Tourism Minister Rita Bahuguna Joshi said the booklet was to promote the lesser known tourist destinations of the state.

Since Agra and the Taj Mahal were already recognised and established tourist destinations, these were omitted from the list.

"You visit any foreign country and ask people there regarding their visit to India. The Taj Mahal would be discussed. The significance of the Taj cannot be underestimated, Goyal argued.

"The Taj is the magnet that attracts foreign tourists to India, we do not really understand its importance yet."

Critics are also dismissive of the argument that the Taj was dropped from the booklet to make way for other lesser known monuments.

"Although India has a lot more to offer in terms of tourism other than the Taj, yet there is nothing compared to the Taj Mahal. Leave aside UP, any tourism publication in the country is incomplete without the image of the Taj Mahal," said Goyal.

In comparison, Varanasi had 5.9 million tourists and Lucknow 4.9 million.

The Taj Mahal and Agra accounted for the maximum number of backpackers who form the backbone of the small and medium businesses built around tourism in and around Agra.

Tourism experts say the state has failed to exploit the full potential of Agra as a tourist destination.

Not only does Agra lack infrastructure in terms of roads and civic amenities, but the Taj Mahal itself has been plagued by troubles.

The Yamuna, on whose banks it is located, has become a dumping ground for waste and air pollution is blackening its pristine white marble.

The Taj and Agra's shoddy state has drawn the ire of the Supreme Court as well.

Hearing a petition recently, the Supreme Court had in a terse observation asked the Centre if it wanted to destroy the Taj.

The petition had sought the court's nod to cut 400 trees to make way for a railway track between Mathura and Delhi.

'This (the Taj Mahal) is a world famous monument and you (the government) want to destroy it? Have you seen the recent pictures of the Taj Mahal? Go to the Internet and have a look at it,' a bench comprising Justices Madan B Lokur and Deepak Gupta observed.

The apex court had likened the prayer for cutting trees to seeking permission to destroy the Taj Mahal.

The Taj Mahal stands on a raised, square platform (186 x 186 feet) with its four corners truncated to form an unequal octagon.

It employs the principles of self-replicating geometry and symmetry of architectural elements and is regarded as the most exquisite monument built by the Mughals.

To protect its legacy and preserve the monument for posterity, the Taj Mahal is subjected to conservation efforts by the Archaeological Survey of India, including mud pack therapy to treat paleness of its white marble.

Under this process, a paste of multani mitti (fuller's earth) is applied on sections of the marble and left to dry for a few days, with polythene sheets covering these spots.

When the dried clay wears off, these portions are washed with distilled water. This method is non-abrasive and non-corrosive and is applied in European countries as well for conservation of monuments.

The danger posed to the Taj Mahal from pollution, the vagaries of nature and tourists has even attracted the attention of Parliament, with the standing committee on environment taking note of the phenomenon and directing remedial measures.

IMAGE: Rangin Basu from Ghaziabad who shot the Taj Mahal at sundown from Mehtab Baug on the other side of the Yamuna.
This photograph was part of a Reader feature on the Taj.
You can see more Reader features on the Taj in the RELATED LINKS alongside. 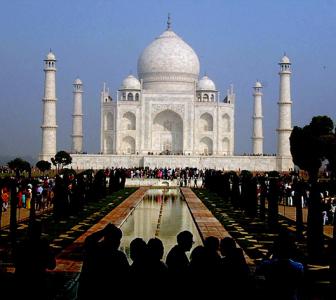 What the Taj means to me 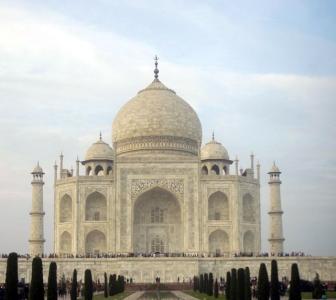