The Sindhis are a lesson in perseverance.
Once uprooted, they've started all over, often reinventing themselves.
Nikita Puri and Ranjita Ganesan report. 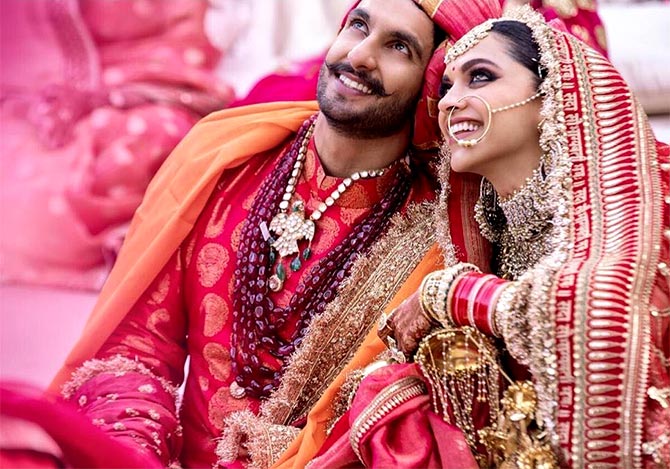 Every year, Vimmi Sadarangani sifts through the stack of admission forms at the Tolani College of Arts and Science in Adipur, Gujarat, looking for markers of Sindhi names, many of which end in '-ani' or '-ja'.

A professor of Sindhi and Hindi, Sadarangani then tries to reach out to the applicants in the hope that they'll pick up Sindhi as one of their subjects.

Sadarangani, also a Sindhi poet, currently has only 10 students of Sindhi at the undergraduate level.

An emotional appeal for learning one's mother tongue, she feels, is often lost on a generation that has little connect with the language or the land it came from -- Sindh.

Sindh went to Pakistan during Partition.

And while the Indus river, or the Sindhu where the Sindhis get their name from, still replenishes the land, a good number of Sindh's Sindhis are now in India.

Fearful of being a minority in the newly formed Pakistan, when the Sindhis crossed over to India, much of what they carried across freshly delineated borders were intangible things -- including their language and the names of places they once intimately knew. IMAGE: The Karachi Bakery in Bengaluru was forced to cover its signboard after mob protests. Photograph: Courtesy Twitter

One of the most iconic of these names is the Hyderabad-headquartered Karachi Bakery.

Earlier this year, riding on a wave of anti-Pakistan sentiment, a group of men barged into one of the bakery's outlets in Bengaluru, demanding it change the name its signboard has displayed since 1953.

The management covered up 'Karachi' with a cloth and also displayed the Indian tricolour on the facade of the outlet.

Later, the bakery's management also announced on Twitter that the business founded by Khanchand Ramnani, a Sindhi who migrated to India during Partition, was 'absolutely Indian by heart'.

But it's no secret that the going hasn't always been easy for the Sindhi community.

The Sindhis have made indisputable contributions to India's economy and identity, yet their own identity comes into question every time politics crosses paths with the national anthem. 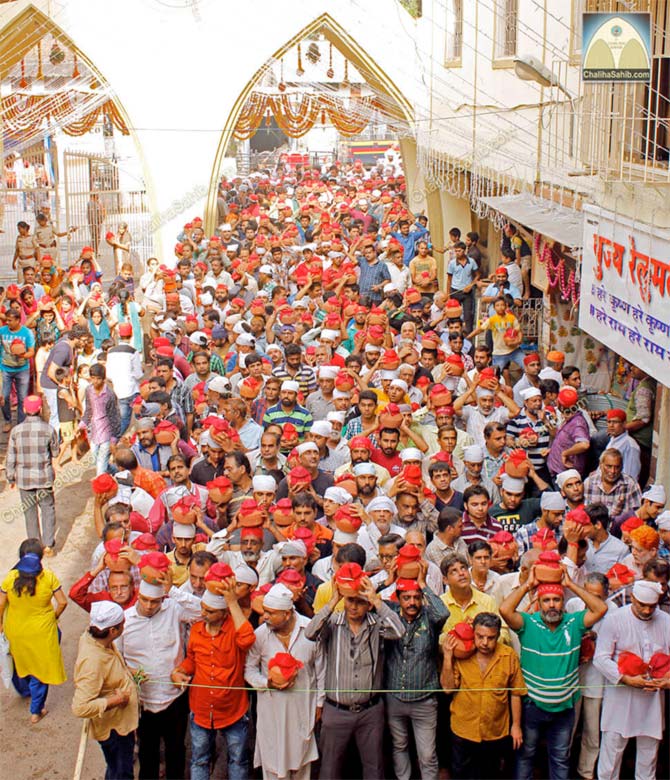 IMAGE: The Behrana Saheb procession. Behrana refers to a satsang which is held in the name of Jhulelal. It is usually performed on Chetichand or at the beginning of any good deed.

Only last year, a lawmaker brought up a topic that often raises its hostile head: The demand that 'Sindh' be removed from the national anthem since it is not part of the Indian state.

Since Sindh was a part of undivided India for millennia, the idea that the Sindhu (Sindhis) are perhaps not Indians doesn't even arise in the community, says Nandita Bhavnani, researcher and author of The Making of Exile: Sindhi Hindus and the Partition of India (2014), and co-author of a coffee-table book, Sindhnamah (2018).

"The Indus has played a big role in India's imagination," she says. "This is the river by which the Greeks and Persians knew India and it's also mentioned in the Rig Veda, so the Sindhu have always been very closely entwined with the idea of India."

Pointing out that the Sindhis have built a number of academic, medical and charitable institutions, Asha Chand of the Mumbai-based Sindhi Sangat, an organisation dedicated to the preservation of the Sindhi language, says the community will "never let Sindh be taken out of the national anthem".

For close to a decade now, the Sindhi owners of a sweet shop in Thane have flourished after pulling off a major coup.

Anyone from the nativist Shiv Sena or the Maharashtra Navnirman Sena driving by would be pleased to read the establishment's title of 'Jai Maharashtra Sweets, Snacks and Farsan'.

In smaller letters on the signboard, however, is the only name by which locals identify this 48-year-old shop: Karachi Sweets.

The reference to the establishment's ancestral ties was made low-key after the 2008 Mumbai terror attacks.

"We don't want to invite problems because we are a peace-loving community," says Sunil Motwani, the third-generation owner.

Motwani's grandfather had a sweets business in Sindh which he resurrected here. The place is known for Sindhi favourites, including sev barfi and bhey pakoras.

While a majority of Sindhis still live in Gujarat, in Delhi they thrive in Old Rajinder Nagar and in Bengaluru they are in Cox Town, Malleswaram and Seshadripuram.

You'll also find Sindhis in the north east and a sizeable number in Chennai.

Sindhi pockets in and around Mumbai are in Ulhasnagar, Chembur, Mulund and Thane.

Signs of 'Sindhiyat' are visible in the Kopri area of Thane where displaced members of the community moved in around the 1950s.

At the local Shiva temple, there are figures of the Sindhi deity, Jhulelal, an incarnation of Hindu deity Varun.

'Sindh witnessed numerous invasions for centuries, but Sindhis not only survived them but also thrived despite them,' writes Ashok Hinduja, chairman of the Hinduja Group, in a foreword for Maya Bathija's Paiso: How Sindhis Do Business (2017).

'Our never-say-die attitude helped us embrace the numerous lands that we migrated to.'

The Sindhis are a lesson in perseverance. Once uprooted, they've started all over, often reinventing themselves.

For instance, after moving from Sindh's Karachi to Bombay (Mumbai), the late G P Sippy sold carpets and developed properties before going on to bankroll iconic films like Sholay.

The Sindhi experience of Partition and their role in India's freedom struggle has, however, remained unacknowledged.

Sindhi freedom fighters such as Hemu Kalani have been left out of history books.

The 19-year-old Sindh native had received a mercy petition that would allow him to go free, but only if he gave up the names of his co-conspirators. He didn't. He was hanged in 1942. Despite being less than one per cent of India's population, says Bhavnani, Sindhis continue to be counted among Indian's prominent citizens and their influence extends beyond business circles.

Jethmalani and L K Advani had, in fact, put their weight behind a call for a 24-hour Sindhi channel when Doordarshan Urdu was launched in 2007.

The Sindhi Sangat, established for the preservation of the language, has also filed a suit against Prasar Bharati for not acting on the demand.

As the generation of Indians born in Sindh dies out, community representatives feel their language is in a major decline since a significant per cent of the youth doesn't speak Sindhi.

This is the price the community has had to pay for being a people without a state.

In the process, they sacrificed their core identity, says Anand, now the CEO of Save the Children.

In her doctoral research, Anand has studied the national integration of Sindhis and concluded that a place of pilgrimage will help in the continuity of their language and culture.

She established this with examples of communities that were similarly scattered around the world -- Muslims and Mecca-Madina, Parsis and Navsari, Sikhs and the Golden Temple. Since 2012, the Sindhi community has been collecting funds for Jhulelal Tirathdham, a place of pilgrimage for Sindhis, which is expected to open in April.

The place identified for this is Kutch, a land that has had significant geographical and cultural ties with Sindh.

So much so that Census reports club the Kutchi and Sindhi languages as one.

But far from the State's purview, it's up to individuals to protect the language.

It is for this reason that Chand, daughter of progressive Sindhi authors Sundri Uttamchandani and A J Uttam, has been staging Sindhi comedies such as Peeu Hairan Putu Pareshan since 2000.

Besides travelling to Sindhi schools across states and promoting Sindhi rhymes among children, Chand has also launched a CD, an app and a Web site called Let's Learn Sindhi.

Those who've been trying to safeguard the language have found a friend in technology, especially among the younger lot who can speak Sindhi.

While Dirven Hazari reaches over one lakh people through a YouTube channel (Sindhionism) with exclusive content for Sindhi-speakers, Bhavna Rajpal promotes the language through TheSindhiGirl and Sindhi Film Festival on YouTube.

Rajpal, who has a collection of over 200 Sindhi movies from both sides of the border, often showcases these at international film festivals. "There are so many of these films that have been lost," says Rajpal.

Her efforts to hold on to the language have helped her forge unexpected connections. Many who participate in her videos are Sindhi Muslims from Pakistan.

As efforts to revive the language continue, some from the younger generation are beginning to rediscover their history. IMAGE: Jhulelal, the patron saint of the Sindhis.

For instance, Namrata Bhagia, a lawyer in her 20s, discovered recently that her grandfather, a former UCO bank employee, still remembers how non-Muslims were gathered in their office and advised to leave Pakistan.

He recalls leaving the house key hanging on the door for the new occupants, who'd most likely be refugees from India.

In Jodhpur, they moved into a house left behind by a Muslim family.

For days after, he'd wait at the railway station at 5 pm for the train from Pakistan, hoping to see his brother who was to follow later. They were reunited a week later.

Similarly, another young Sindhi has only now decided to learn how to make koki parathas and the vegetable-laden Sindhi kadhi.

"My plan is also to visit Sindh soon to see the homes of my ancestors," she says. She's not alone in craving a taste of Sindh.

In 1948, when his family decided to leave for India after his uncle was roughed up, Mangharam Nanwani was only 11 years old.

Nothing of his previous life, where elders distributed pure ghee in bulk, could be carried on the journey from Sindh's Kamal Dero to Rajasthan's Abu Road.

A decade later, his family had settled in a refugee settlement in Kopri.

The small tenements there weren't disheartening, says Nanwani, because Sindhis had adopted an attitude of "beet gaya woh sapna, jo sach hai woh apna (the past is a dream, we own only that which is real)."

The adjustments they made included some of the brothers taking up jobs while also reviving the old ghee business.

Nanwani would deliver consignments during breaks from his work in the Employment Provident Fund Organisation office.

He found new friends whilst shrugging off people who had turned the word sain -- the Sindhi equivalent for 'sir' -- into a slur.

Since his retirement in 1995, the 81-year-old has had time for nostalgia, such as rewatching the 1958 Sindhi film, Abana.

What he longs for, however, are things such as the luscious taste of pabora (lotus fruit), toot (mulberries) and khiroli (water lily tubers) that grew near his birthplace in Sindh.