'The circumstances indicate that the government is not serious about the commission...'
'...We are not at the mercy of the government.'
Jyoti Punwani reports from the Bhima-Koregaon commission. 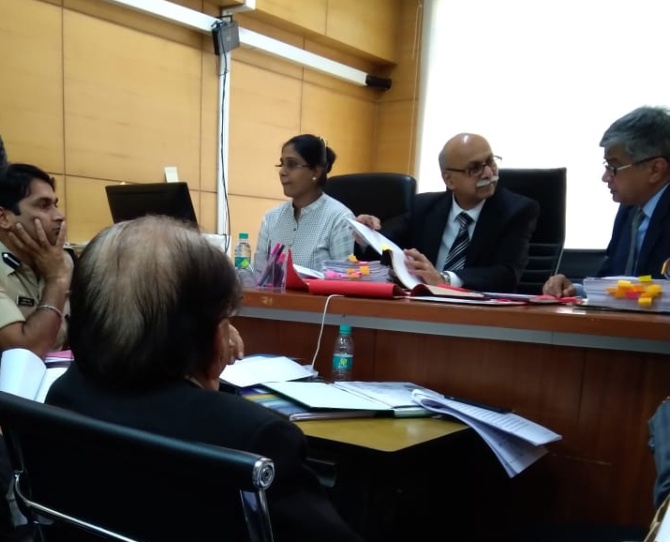 'Do you think we have no other work but to attend to the needs of your commission? Just shut it down.'

After three months of having its superintendent subjected to humiliation by staff at Mantralaya -- the seat of the Maharashtra government -- the two-member Bhima-Koregaon commission of inquiry on Friday, January 31, recommended to the government that the commission be wound up.

While no one, including the chairman of the commission, has been paid since December, most of the staff stopped receiving their salaries since November.

In November, the Maharashtra home department on its own scaled down the budget demanded by the commission to less than half.

These and other startling facts have been stated in a letter addressed to the chief secretary, government of Maharashtra, the additional secretary, home, and the principal secretary, home special 2, signed by commission secretary V V Palnitkar.

The letter was sent on Friday.

The commission was set up on February 9, 2018, to investigate the violence that took place on January 1, 2018, when lakhs of Dalits had gathered to observe the 200th anniversary of the battle of Bhima-Koregaon.

It has so far received four extensions, and its term expires on February 8. "Nobody from the government is interested," he went on as everyone in the room stared in disbelief. "The staff is not paid, bills are not sanctioned. If it was only me, I wouldn't have said anything. But I cannot expect my staff to work for me without being paid. When they go to Mantralaya, they are treated like trash," said an angry Justice Patel, adding that they had saved a lot of government money by functioning with minimum staff.

"They think the commission is a botheration on the exchequer. We are not at the mercy of the government," Justice Patel added.

His dual responsibility has limited the working hours of the commission to two sessions a month, one in Mumbai, the other in Pune. These last between three to five days. In Mumbai, the sessions can be held only in the afternoon.

The letter to the government details how, after the initial meagre budget of Rs 52 lakh (Rs 5.2 million) was exhausted, the government either delayed sanctioning the supplementary budget or sanctioned much less money than required.

Salary and other bills were not promptly passed. Not only was no advance given for day to day expenses, but expenses were not reimbursed for months.

The commission's term was last extended on November 8, 2019. At that time, says the letter, the commission had placed a supplementary demand of budget to the tune of Rs 65 lakh (Rs 6.5 million). This should have been submitted to the finance department on or before November 16.

What's worse, the home department prepared a note to the effect that only Rs 25 lakh (Rs 2.5 million) were asked for by the commission.

Counsel for the commission Ashish Satpute is being paid Rs 10,000 per hearing in Mumbai. Since he has to forego his practice when the commission holds its hearings in Pune, the commission had recommended that he be paid Rs 20,000 for the Pune hearings.

However, that has not been done till date.

Nor has the government's Counsel Shishir Hiray been paid.

Not just salary, but even the renewal of the ID card of the commission's stenographer Pritam Uttekar has not been done for more than three weeks. What brought matters to a head was the response of Deputy Secretary Home Special 2, V M Bhat, who was summoned to the commission's office on Friday. He told the Commission that there was no budget for it, and the commission would get funds only after the budget session.

The letter also mentions the humiliation suffered by Commission Superintendent Govind Dingankar by the home department staff whenever he went to inquire about pending bills. The concerned under secretary even asked him to wind up the commission, says the letter.

Dingankar told Rediff.com that he was made to feel like a beggar when he went to Mantralaya.

"They keep telling me to come back later. I have to make so many rounds of their offices, and I'm sent here and there," Dingankar said. "While he was often told 'Why do you keep coming here?' and 'You think we have no other work?', Under Secretary Pragnya Ghate told him to wind up the commission.

Things had got worse after November, he said.

The state's administration had come to a halt for two months in October and November due to the assembly election and the uncertainty in government formation thereafter. The new government was formed on November 23.

In conclusion, the letter notes: 'The circumstances indicate that the government is not serious about the commission. The commission is unable to function for want of money even for day to day expenses. Most of the staff are hired on contract basis. They would starve for want of salary.'

'Honourable Chairman of the Commission is at pains to express his displeasure and expects the State to take remedial steps.'

Advocate B A Desai, the senior-most counsel appearing before the commission, requested Justice Patel to reconsider his decision. "You may give the government a deadline, but please do not say that you are winding up. The commission stands for truth and justice," he said, "its work needs to be completed."