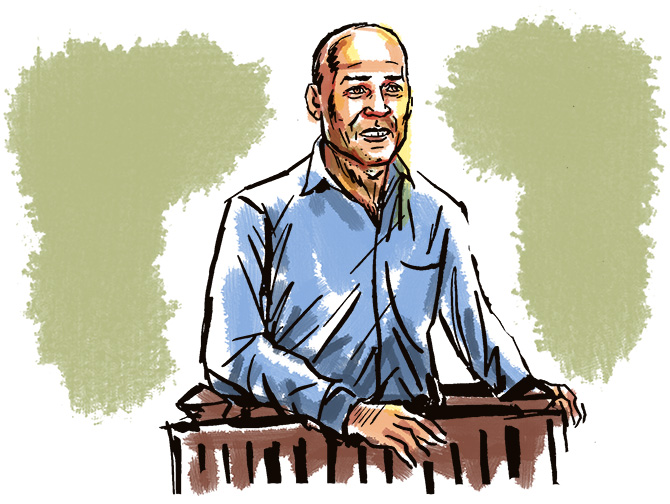 Peter Mukerjea, Accused No 4, wasn't in court for the Tuesday, April 2, 2019 hearing in the Sheena Bora murder trial.

Nor was he expected to be.

Still recovering from nearly 100 stitches after a 13-hour bypass surgery, that took place on March 25, from 11 am to midnight, to tackle several life-threatening blockages in his heart, Peter is admitted at the Asian Heart Institute, Bandra-Kurla Complex, north west Mumbai, about 21 km from the Mumbai city civil and sessions court at Kala Ghoda.

Pictures of Peter, though, post-surgery, were in court, showing his grim-looking six- or eight-inch long chest surgery incision.

They were part of the evidence submitted before CBI Special Judge Jayendra Chandrasen Jagdale in Courtroom 51 by his lawyer Shrikant Shivade for his bail plea, the decision for which is still awaited.

In the accused box behind sat only Sanjeev Khanna, Accused No 2, as Indrani Mukerjea was almost 30 to 40 minutes delayed in getting to court from jail.

It will be quite a while before Peter is back in his customary spot in the box, wearing his signature white and khaki, taking careful notes of the proceedings.

Shivade got to his feet to narrate the grave tale of how Peter reached Asian Heart's venerable Dr Ramakanta Panda's operating table from his Barrack 12 at Arthur Road Jail, central Mumbai.

Apparently Peter had complained of chest pain from ten days earlier, especially on exertion, before finally on Saturday, March 23 the jail officers believed him and organised for a portable ECG machine to be brought to his cell from the nearby Sir JJ Hospital.

The subsequent ECG recognised an unquestionable disturbance in the heart that turned out to be a mild attack.

It took another hour for the ECG technician and the jail authorities (who probably deal with many false cases of heart discomfort too) to act on these results and have Peter transferred to JJ.

Questioning both delays, especially the time taken between the completion of the ECG and Peter's admission in JJ, Shivade stated, "The first hour is (what they call) the golden hour for a heart patient... (Peter's) life was at stake. But only after an hour was (he) admitted to JJ. The technician could not appreciate (the haste required). The jail officers could not (either)."

Only two days later an angiography was done that revealed three blockages of 90 per cent and a fourth of 100 per cent. His lawyers then applied and got the judge's permission to have him transferred to Asian Heart for surgery.

Shivade pointed out further, "Just by the grace of god he is alive. Alive because of the change of hospital and proper care at Asian Heart Institute."

Emergency surgery was subsequently carried out. Now, as Peter expects to be discharged in the next few days, his advocates were seeking six months bail for Peter's post-operative recovery at his home in Worli, south central Mumbai.

Shivade pointed out that JJ did not have a cardiac surgeon on its staff nor were its doctors and staff aware of what was the right post-operative care for a patient recovering from bypass surgery.

The judge intervened mentioning it was after all a hospital, although he later remarked that he had never been to the hospital and not many, he added with a long smile, would prefer to carry out a heart operation there.

Post surgery, because of the many and exceedingly delicate stitches, Peter's condition was frail and the lawyer strongly believed that neither JJ nor the jail would be the right place for him to recover.

"They say the jail will take proper care. It is easy to say, but not the truth." Shivade said the jail had mosquitoes, cases of dengue and malaria and would expose Peter, already on the highest levels of antibiotics possible, to infection.

Nor would they be able to act promptly if Peter faced a sudden emergency or complication from the surgery because of the protocols they were required to follow before allowing someone who needed to be hospitalised immediately, can be taken to JJ.

He said it was also known that care at the state government-run JJ was not up to the mark, with deaths having been reported in the past and cases of purchase of substandard medicine.

Objecting to the reaction from the CBI's investigating officer on the bail plea that said, 'Bypass surgery has become very easy' and was now occurring even in 'small cities' and there was not much need for post-op care, Shivade angrily said the reply was "ridiculous" and showed a "cavalier attitude."

Judge Jagdale agreed, commenting astutely, understanding writ large on his kindly face, it was "easy" while it was still the "other" person to whom it (bypass surgery) was happening to and might be viewed differently it was happening to yourself.

Concluding, Shivade declared that if bail was not given and Peter was sent back to jail or to JJ it would be like "giving a death sentence without a trial. Rejection of bail application is like signing his death sentence. He needs temporary bail of six months."

He implored: "Give him a chance to live."

One remembered that just the last time Peter was in court the lawyer had told the court that Peter felt he might die in jail, his innocence not yet proven.

Perhaps, because of that unignorable pain that had been niggling his chest for long, that premonition Peter was labouring under had not been wrong at all.

The events of last week had shown he had defeated death by a whisker.

You have to wonder how many more there are out there in jails, among the thousand and thousands awaiting trial, who are not as lucky.

The prosecution on the other hand felt Peter could recover in jail with special supervision or at JJ.

CBI Special Prosecutor Kavita Patil, wearing a crisp white and black sari, countered Shivade's arguments saying the application was premature and no details had been provided of what actual post-operative care Peter needed.

She also said there was nothing on record to show that either the jail or JJ was unhygienic and incapable of the right care.

Life (in jail) and death are commodities that are often spoken about so casually amongst lawyers in courtrooms that for an outsider it takes a little getting used to.

Reading from the Asian Heart post-operation advisory pamphlet that counselled patients to undertake initially only 'light housework, dusting, washing dishes', Patil pointed out that Peter was required to move about and was not bed ridden or obligated to take bed rest.

Shivade retorted these were examples given that should not be literally interpreted: "No question of dusting!"

He said there was no better candidate or case for bail than Peter and they didn't know if he was going to survive after surgery."

The judge laughing, added in Marathi, "I am worried about you too", implying that Shivade's acute anxiety was disquieting.

Judge Jagdale is expected to make a decision on Peter's bail by Thursday.

Shivade also stated that they wished for the trial to proceed in Peter's absence.

Prosecution Witness No 39 Lakshmikanth Shetty was therefore produced in court.

A short, bald man of 44, with a mobile face, lively eyes and a constantly bobbing Adam's apple, Shetty, a resident of Khar Danda, as per the prosecution's account, quite literally tapko-ed (fell) into the case.

According to him, he had been walking merrily past the Khar police station on his way to the Khar railway station one fine day, just a little past noon, in September 2015 when a police constable asked him, out of the blue, to step into the police station, saying, "My officer wants to speak to you about a case.".

The room he was taken into had another one or two police officers/constables whose names were Chavan and Kadam, another ordinary citizen like him named Prem and a woman.

Inspector Kadam told Shetty he wanted to speak to him about the Sheena Bora case.

"He asked me, 'Have you heard about the case?'" He said he had. "It was a hot issue highlighted by the media. The police officer said the lady sitting there was Kajal Sharma (Indrani Mukerjea's secretary). She had some documents to give."

Shetty, fresh off the street, was asked to serve as a panch (witness) in a headline-breaking murder case, along with the other person named it seemed Prem Amberani in the panchnama (recording of testimony) drawn up to register the material handed over by Sharma.

Sharma had brought with her, her "black HP laptop,” a Scan Disk pen drive, an agreement and some receipts, some of Reliance," Shetty recalled.

Speaking in English, in a low voice in soft words, that even the judge had a terrible time catching, Shetty, who seemed a well-to-do man, smiled a lot and was obliging. He had a decent memory too.

The police, that day Shetty explained, took the hard drive off the laptop, the pen drive and the papers. The items, according to the witness, were put into brown covers, labelled with the case number and sealed and he had to sign. And the papers were filed into clear plastic folder.

The panchnama was in Marathi and Shetty, who could only understand a little of it, was asked to read it and sign by Inspector Kadam.

Indrani's lawyer, the petite-looking and sometimes fiery Gunjan Mangla, took over to cross-examine Shetty. She had about five or six questions.

She wondered, without saying it in so many words, why Shetty mysteriously and fortuitously happened to be wandering that way on that particular day and if Shetty had ever been to the Khar police station before.

He had not, he said in a definite tone.

Mangla also asked if he had verified the serial numbers of the hard disk and pen drive. He didn't answer.

She accused Shetty of not being present through the process to draw up the panchnama and that he had signed it only on Inspector Kadam's say so. Shetty denied that. He was then allowed to depart.

Shetty is one among a series of panch witnesses the prosecution has been producing. On March 15 another panch witness named Ayub Mohammed Khan, Prosecution Witness 38, who was present at the Khar police station when Indrani's son Mekhail Bora handed over a slew of Sheena's documents, including her birth certificate, school-leaving certificate, caste certificate etc.

While panch witnesses appear, to the inexperienced onlooker, to be somewhat extraneous to the process, with hardly much information to offer, they are a crucial part of the legal procedure, vouching that certain documents were handed over, as witnesses had stated and the key eyewitnesses to various police procedures.

It has to be also noted, once again, that the police have difficulty in finding the requisite panchs, hence the defence's routine suspicion of their identities.

Indrani, wearing a crisp white shirt and brown jeans, Tuesday, suddenly, puzzlingly asked for a private moment with the judge after the hearing. Her lawyers were not present. The doors of the courtroom were closed as she spoke to Judge Jagdale. The subject of discussion was not revealed.

One can only guess what her request was. Was Indrani seeking a jail transfer? Was she bringing up her health conditions once again? Was it another request for bail? Was it something about Peter? Or was it about her lie detector test?

But if there is one thing one has learned about Indrani, after watching her in court through two years it is: Surprise nay Sensation has always been Indrani's middle name.