Sheena Bora Trial: Indrani's bail and the car with the body

And while the owner of the Chevrolet, which held Sheena's remains, will be examined on October 16 in Judge Jagdale's court, it is Indrani's response to the prosecution's reply to her bail application that will be the focus of everyone's attention.
Savera R Someshwar reports from the Sheena Bora murder trial.
Illustration: Dominic Xavier/Rediff.com 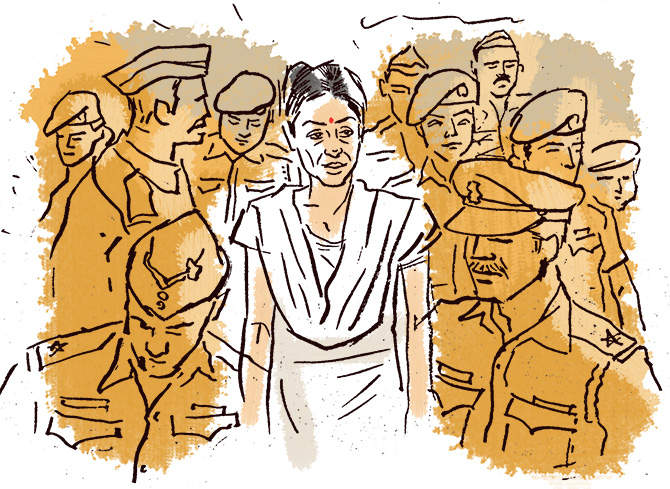 It was a slightly different day in Courtroom 51 of the Mumbai civil and sessions court where Judge Jayendra Chandrasen Jagdale presides over the ongoing Sheena Bora murder trial.

Central Bureau of Investigation Special Prosecutors Kavita Patil and Bharat Badami, who are almost always on time, were missing.

As was Witness No 20, Faisal Nisad Ahmed, the director of A M Motors, a car rental company that hired out the car which, according to the prosecution, played a key role in the murder.

And Witness No 21, Vishwajeet Sawant, who served as the one of the panch (witnesses) at the Khar police station for the Sheena Bora trial.

Judge Jagdale, unhappy with yet another delay -- delays, he has repeatedly made clear to the lawyers in this case, is something he does not want in his court -- threatened to issue a warrant against the missing witness.

The defence, for a change, was there in full strength, including Accused No 4 Peter Mukerjea's lawyer Shrikant Shivade and Accused No 1 Indrani Mukherjea's lawyer, Sudeep Ratnamberdutt Pasbola.

Indrani, looking rather wan in white -- though she had attempted to perk up her look with a faux pearl-encrusted bindi and sindoor -- prayed for the judge's indulgence.

Standing in the witness stand, she requested an update about her bail application.

The judge, after some consultation with his always efficient clerks, informed her that the prosecution would file its reply by October 11 and she could counter their response on October 16, the date scheduled for the next hearing.

Indrani bowed deeply and stepped out of the courtroom.

When Badami whirled in with Patil, more than 40 minutes late -- by which time Pasbola had left and Shivade was conferring with his client -- he was not a happy man.

He had, he informed the judge in injured tones, always bent backwards to accommodate the defence lawyers's hectic schedule, but the same courtesy was not extended to him on the rare occasion that he was late.

As Judge Jagdale smiled soothingly, Badami explained that Witness No 20's mother was suffering from cancer "and he did not want to leave her at her deathbed".

Witness No 21 was, said Badami, "suffering from high blood pressure".

Judge Jagdale, ever-soothing: "There is a procedure..."

Witness No 20, Ahmed, who is now expected to depose on October 16, is expected to shed light on the Chevrolet that reportedly temporarily housed Sheena Bora's remains the night she was killed.

"It was the car that was used by Shyamvar Rai for the first recce (when he was searching for a place where a body could be safely disposed). He then drove Indrani in the same car for the second recce," Badami said later.

"The same car was used to pick Sheena near the National College. It was the car in which she was murdered. They used the same car to take her to Marlow (the building in Worli, south central Mumbai, where the Mukerjeas stayed; the car -- with Sheena's body hidden in a suitcase in the boot -- was reportedly parked overnight in the Mukerjeas's garage). The same car was driven to Pen the next day for the disposal of the body," the CBI prosecutor stated.

"On the way back," Badami added, "Indrani and Sanjeev (Khanna, Indrani's former husband and Accused no 2) were dropped on the way. It was the same car that was later used to pick Peter from the airport."

And while Ahmed, the owner of this car, will be examined on October 16 in Judge Jagdale's court, it is Indrani's response to the prosecution's reply to her bail application that will be the focus of everyone's attention. Travel no more than three hours for Cancer treatment