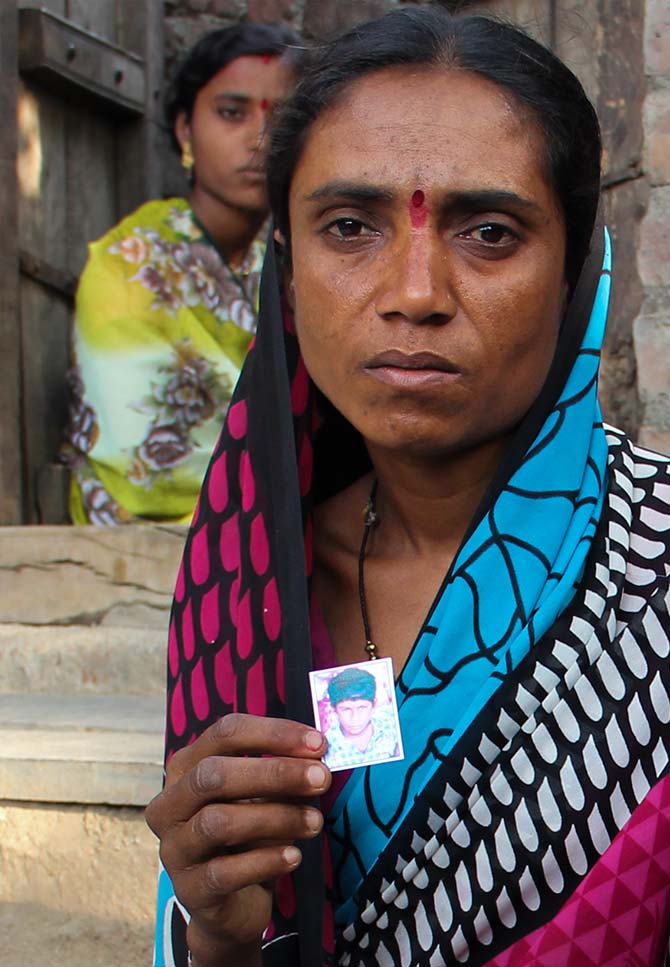 Every tragedy needs either a defining moment or a defining image to stir the collective conscience of a nation.

Images play a decisive role in shaping the responses of the public and people in power to such tragedies. Like that haunting image of a child killed by Union Carbide's poisonous methyl isocynate in Bhopal, December 1984. Or the heart-rending image of a Muslim tailor pleading with the army to save his life during the Gujarat riots, March 2002. Or the shocking photograph of a Jet Airways cabin crew member after the terrorist attack in Brussels a few weeks ago.

Unfortunately, the drought currently ravaging large swathes of India is yet to throw up such an image: An image that startles a nation's collective conscience and generates public pressure on uncaring governments to make a difference and tackle the drought on a war footing.

For prime time news television-watching middle class India and the politicians who took credit for doing their bit for the 33 crore (330 million) Indians who now face the severity of deficient rainfall since 2011, the drought may have ended the day the Supreme Court ordered the shifting of IPL matches outside Maharashtra and trains brought water to Latur city.

On the ground, the situation sinks further into desperation and hopelessness as village after village, farmer after farmer, that Rediff.com visited and met during their journey across Beed district in Maharashtra, confirmed they have just two to four weeks of water left in their wells and water bodies.

This report is not about the farmers Rediff.com reporters met and listened (their stories will follow soon) but of Sachin Kengar, 9, who drowned while fetching water from an open well even as his elder brother watched helplessly.

On Friday, we reported the tragedy of Yogita Desai, a Class 5 child who collapsed near her home on her fourth trip to fetch drinking water and died that night. 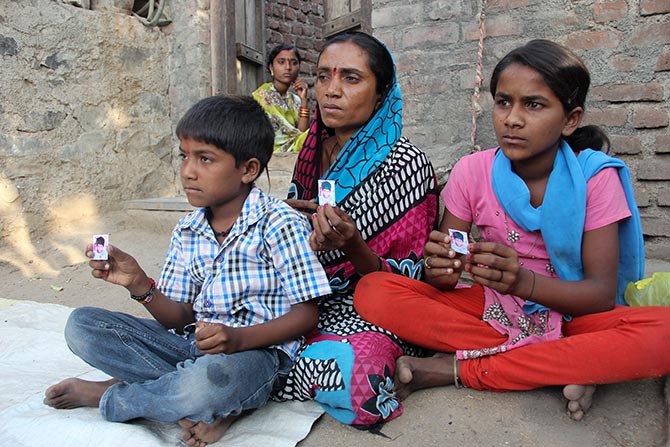 IMAGE: Ashabai Kengar with her youngest son Mahesh and daughter Pushpa outside her brother's house in Vida village, Kej taluka, Beed district, Maharashtra.
Her son Sachin, 9, drowned while fetching water from a well located about a kilometre from their home.

Ashabai Mahadev Kengar is a feisty woman. Married to a man, who she says was not interested in the upbringing of their four children, this homeless lady collects plastic bottles when she is home, or works as a farm hand in sugarcane fields as far away as Baramati, Phaltan (both in Maharashtra) and in the neighbouring state of Karnataka. The strenuous work fetches her between Rs 150 and Rs 200 on the day she gets work.

When Mahadev, also a farm hand, did not give her money from his earnings to bring up their children, she migrated from Murshidpur (also in Maharashtra), her husband's village, to her mother's home in Vida village in Beed's Kej taluka four years ago.

Unlike her children, Ashabai never went to school and puts forth this fact as the reason why she can't remember the exact ages of her four children, including Sachin's, who drowned on the morning of April 21.

"Mahesh (her youngest son) must be about 7, 8 years; Pushpa (her daughter) is about 10, 12; Sachin must have been 9, 10 and the eldest Chandu (who was with Sachin when he drowned), must be around 15, 16," she says, seated in an open area on a cow-dung smeared floor outside her mother's home.

Her brother's wife sits on the other side of an open door, clearly demarcating the boundary between Ashabai's abode and her brother's house. Ashatai says she had been staying in the small verandah outside her mother's home because she didn't want to burden her brother and mother with the upbringing of her four children.

"I have no home of my own," she laments as Mahesh and Pushpa sit cross-legged around their mother. "This is where all six of us would spend our days and nights, cook food, eat, drink and sleep," she says, pointing towards the open space around us which is no more that 60-odd square feet.

"Now, this space belongs to only five of us," she weeps, reminding herself about Sachin's tragic death.

When we visited Ashabai's home on April 30, it was the tenth day after Sachin's death. "From tomorrow, I will begin going out in search of work; if not that I will at least collect water bottles and get some money home," she says.

She had borrowed money from a local moneylender for her son's last rites and to feed her family in the absence of any income since her son's death. "I have to get back to work soon," she adds.

Ashabai would often take her younger children -- except for Chandu who would stay at her mother's home -- with her whenever she moved away from Vida to neighbouring districts or states in search of work. Those days, Pushpa, Sachin and Mahesh would miss school. 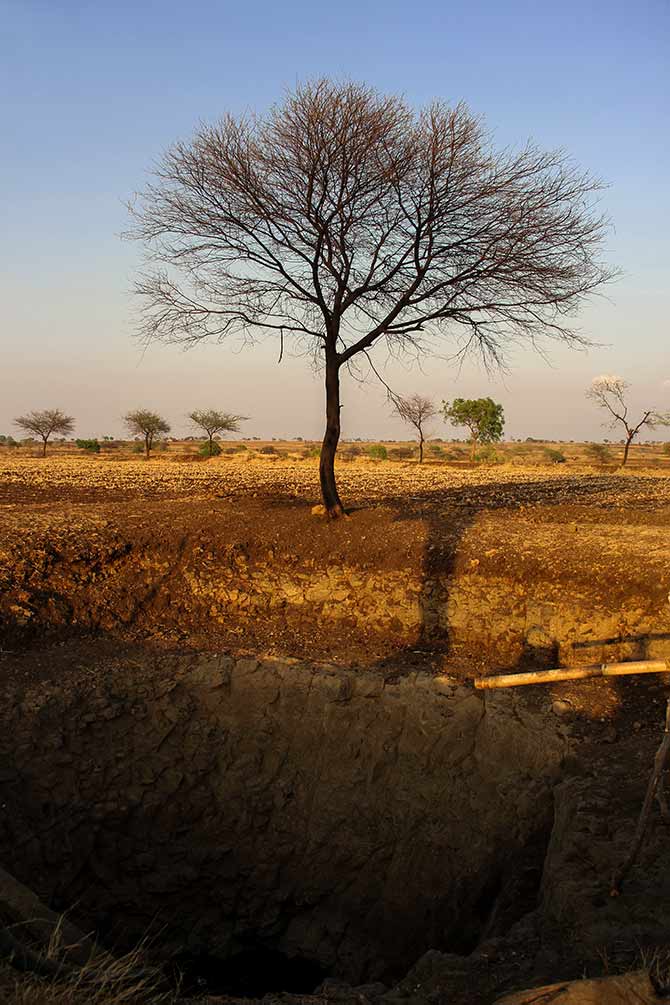 IMAGE: The killer well that devoured Sachin. The two brothers had taken a bicycle to get water for their family.

On the morning of April 21, Sachin along with Chandu left home on a bicycle to fetch drinking water from a well located about a kilometre away from their home.

They took the tarred road that opens right in front of their home and then after walking about 700 metres took the right turn towards the well, another 300 metres away, passing through several farms.

This was the boys' daily routine whenever they were in Vida.

When Chandu and Sachin reached the well at 7.30 am, their mother was away from home collecting plastic bottles.

The well in which Sachin drowned has no boundary wall. A long but thin cement slab, whose two ends rest along the well's circumference is laid across the well like a circle's chord to facilitate people to rest one of their feet on the ground and the other on this cement slab.

Like many wells that these correspondents visited in Beed, including the one where Sachin drowned, this one too is a dangerous trap, ready to trap any child who did not know swimming.

Sachin and Chandu, like many, many, children we met around such dangerously designed wells, did not know swimming.

When Sachin fell in the 10-feet deep well Chandu panicked and almost jumped in to save his younger brother. "'Don't jump after me. You too will drown,' Sachin yelled at his brother even as he desperately tried to keep afloat," Ashabai tells us recounting what Chandu told her.

"That was all he could say before he went under," she says.

Chandu ran home to get help. By the time Vikas Umaji Jadhav, Ashabai's younger brother, and Chandu went back to the well, Sachin had drowned.

"Sachin was found breathless, stuck in the silt that had deposited over the years," says Ashabai, who was unaware of her son's fate till someone from the family went searching for her that morning.

"I have never been a burden on my mother, brother or his wife," says Ashabai.
"I didn't think twice before going out to earn money and look after my family when my husband stopped giving me money for our children's upkeep."
"I have on my own educated my children and will continue doing so. But I will request the government or whoever wants to help us to help us build a house where I am staying right now."
"At least, three of my children will sleep under proper shelter if that happens," pleads Ashabai. Video: Prasanna D Zore/Rediff.com

While Sachin's death has been accepted by his mother -- Pushpa and Mahesh are too young perhaps to understand the pain that their mother is going through -- she wants both of them to go to school and get an education.

"Bheek magun, mehnat karun tyanchi pota bharli ahe (I have raised them by begging and working hard). I don't want them to go the way my eldest son did," she says.

Chandu, her eldest child, she says, left school when he was in Class 4 to work as a farm hand.

"Sachin was very clever. He had lots of potential, but that was not to be," she says, remembering her lost child.

Ashabai had brought new clothes for all her children a few days before Sachin's death so that they could wear it for a festival that was scheduled on May 6.

"Veechar kela samdhi lekara nat-til aani majhi lekara tashich rahtil. Mhanun tyanchyasathi bhangar vikun naveen kapde aanle. Pan devane majhya lekarala naveen kapde ghalu dile nahi (I knew that for this festival all other children, but my own, would dress up smartly. So I thought, why should my children not dress up? For them I bought new clothes by selling plastic bottles. But God didn't let my son wear the new clothes)," she says.

"I buried those clothes with him," she adds.

"I go to fetch water from the well now. I have already lost one son. Ajun kiti karu? (how many more can I bury?)."

As per the traditions followed by the Huler caste to which Ashabai belongs, unmarried children are buried after death.

'What will we drink if we start fearing these wells?' 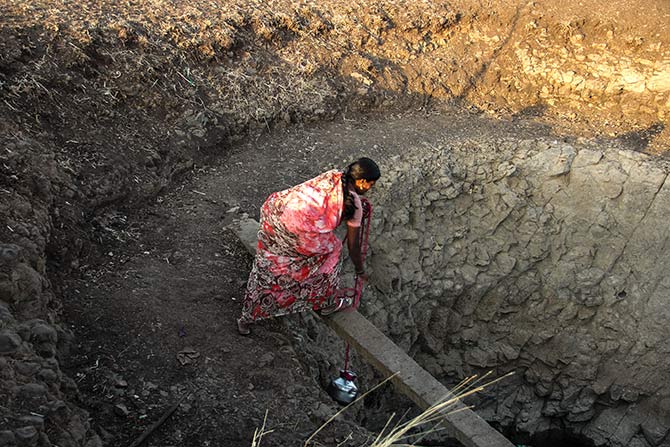 IMAGE: Nandu Jadhav is a good swimmer and a regular at the well. This well is her village's only source of water and she and her children regularly visited the well.

When these correspondents visit the well where Sachin drowned, Nandu Jadhav, a resident of a small village on the edge of the tarred road, has come to fill water.

Standing precariously, with one of her feet on the cement slab and the other on the border of the well, Nandu, a good swimmer, says, "Sachin's brother should not have panicked. Instead of going to get his uncle he should have shouted for help. People from our village would have rushed... something could have been done," she says.

It is common for families in the village to send their children to fetch water from the wells, she says. "What will we drink if we start fearing these wells?" Nandu says when asked if she or children in her family feared visiting the well after Sachin's death.

"Chandu panicked. He didn't know how to react," Sachin's uncle Vikas Umaji Jadhav, who recovered his nephew's body from the 10-feet deep well, told Rediff.com over the phone.

When asked if Sachin could have clung on to the rocks adjoining the well, as there were many along the periphery of the water, Vikas says, "he didn't know how to swim. He must have got scared and drowned."

Will this image haunt you? 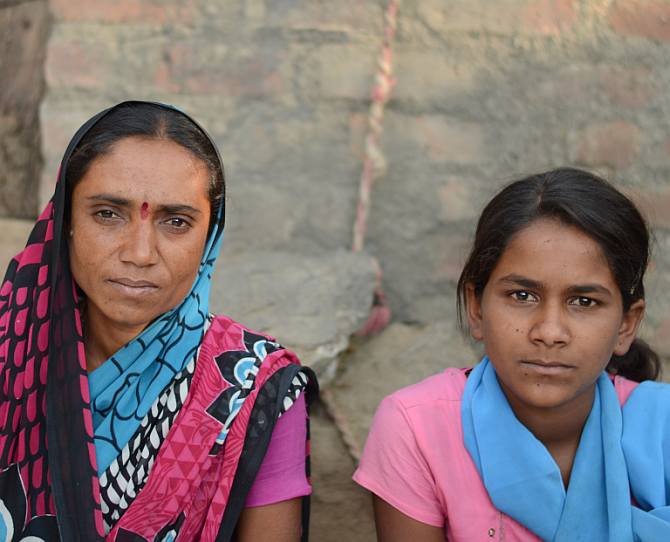 IMAGE: Sachin's younger brother Mahesh was fiddling with my camera's strap as I was speaking with his mother.
After the conversation ended Mahesh kept staring at the camera. When asked if he would like to shoot a picture, Mahesh turned coy. He agreed only after his sister Pushpa and mother egged him on.
A couple of minutes of explanation about how to go about shooting a photograph and how to compose one was all that was needed for the seven year old to shoot this one image.
Enthused by his effort he shot a couple more photographs and was overjoyed by his effort. Photograph: Mahesh Kengar 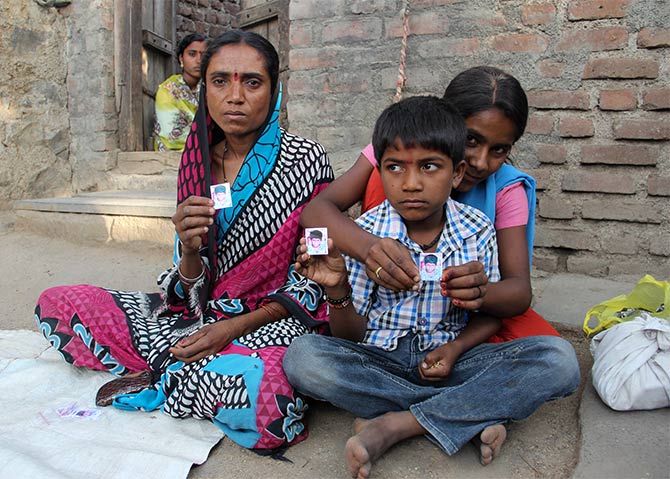 IMAGE: Pushpa's innocent smile haunts us long after we met her. Despite her penury, Ashabai wants to educate her daughter as well.

When Mahesh was looking through the viewfinder Pushpa couldn't help but keep smiling.

Her smile shall forever haunt us about how innocently children respond to personal grief, but perhaps her smile also shows us the triumph of the human spirit over death.

As for Ashabai, her poverty and her desire to feed and give Mahesh and Pushpa a proper education are reasons strong enough to overcome her personal pain.

She will be out of her home, collecting plastic bottles to help ends meet, as you read this feature. But only after she has filled water for her family's needs from the well where her son Sachin died.