Has Owaisi's MIM become an albatross for Imtiaz Jaleel, former journalist and the party's candidate in Aurangabad?
Jyoti Punwani finds out. 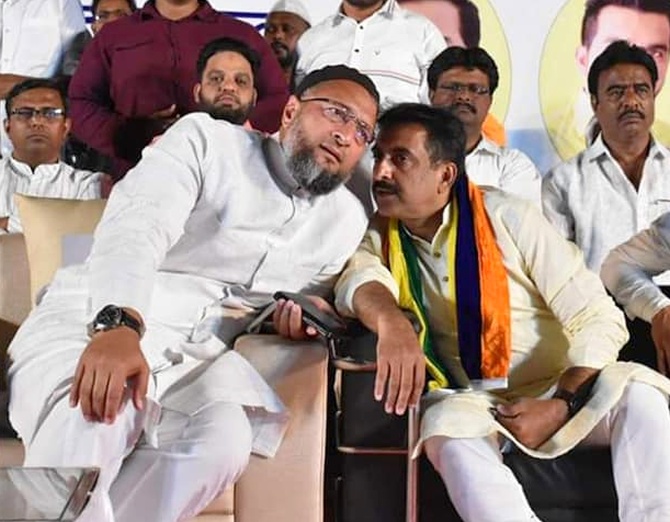 Are the majority of Aurangabad city's Muslims -- 31% of the population -- ready to vote for sitting MLA Imtiaz Jaleel because of his party, the All India Majlis-e-Ittehadul Muslimeen, or despite it?

Has the Asaduddin Owaisi-led party become an albatross for Jaleel, the former print and television journalist who has grown up in this city, or does he continue to draw sustenance from it?

These questions come to mind when Aurangabad's Hindus -- be it leading industry spokesmen or educated Shiv Sena voters -- end their litany of praises of the AIMIM MLA with the words: "But his party we can't support."

Jaleel was one of two AIMIM candidates who surprised everyone by winning the assembly election in October 2014, when the Hyderabad-based party first contested legislative elections from Maharashtra.

That election was fought separately by the Bharatiya Janata Party, which had swept the state in the Lok Sabha polls, and the Shiv Sena. The division in votes between these two parties helped Jaleel sail through with a 20,000 margin, mainly of Muslim votes.

Even at that time, Jaleel didn't fit the image of an AIMIM candidate. Unlike most other party candidates, who were faceless symbols for AIMIM President Asaduddin Owaisi, Jaleel had his own standing in Aurangabad and it had little to do with being Muslim.

His father was a well-known civil surgeon; he had Hindu friends from school and college; and through his profession as a journalist, first with Lokmat and then with NDTV, he was on friendly terms with the cream of Aurangabad society, both Hindu and Muslim.

A year after Jaleel was elected, civic polls were held in Aurangabad. The MIM, contesting for the first time, got 25 corporators elected, just four less than the ruling Shiv Sena which led the tally.

Imtiaz Jaleel and his party had arrived in Aurangabad.

In his five years as MLA, Jaleel has pleases his voters -- as well as those who did not vote for him.

For the first time in decades, pucca roads line many of the old Muslim areas. While a local journalist says Jaleel shows more readiness to help Hindus who approach him than his own community, Muslims say he has stood by them when it mattered most.

Last May, a communal riot shook the city, leaving two dead in police firing, and one policeman seriously injured. After the police went on its usual spree of indiscriminate Muslim arrests, breaking down doors and terrorising residents, Jaleel sat on a dharna outside the police station in protest.

His party helped in the joint effort by Muslim organisations to rebuild shops destroyed in the riots. These included Hindu-owned shops.

But Jaleel has been active in the city's other issues too. Pradeep Purandare, one of Aurangabad's foremost authorities on water, reveals that Jaleel himself studied the flawed Samaantar (parallel) pipeline plan introduced by sitting Sena MP Chandrakant Khaire, and played a role in getting a committee constituted to evaluate it.

In brief, Jaleel has managed to change the AIMIM's image in Aurangabad. What clinched this was the sacking of AIMIM corporator Syed Mateen who had objected to the Aurangabad municipal corporation suspending work to pay tribute to former prime minister Atal Bihari Vajpayee after his death last year. He had earlier objected to the singing of Vande Matram in the corporation.

"Mateen's videos have gone viral and have shocked us," says taxi operator and old city resident Khalil Khan. "That's not the kind of language we want to hear, it can only create riots. It is good Jaleel sacked him."

One normally expects such wisdom from an elder. Khalil is just 32, indicating Jaleel's broader approval in the community, rather than only among young hotheads who comprise the majority of AIMIM supporters in Maharashtra. 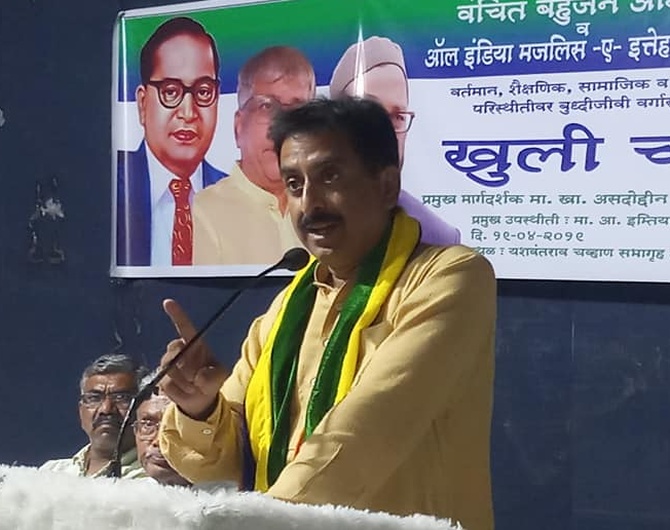 This profile is also one reason why Jaleel could dislodge AIMIM ally Prakash Ambedkar's original choice for Aurangabad -- the well-known retired Justice B G Kolse-Patil, one of the two organisers of the controversial Elgaar Parishad held on December 31, 2017 in Pune.

It was reported that Jaleel threatened to resign from the AIMIM if he was not given the Lok Sabha ticket, an indication of his clout in Aurangabad.

He denies this, telling Rediff.com that his supporters were very upset, and so the party, which had decided against putting its own candidates in these polls, reconsidered its decision.

Jaleel is one of only two non-Congress-NCP candidates named by the Jamaat e Islami as deserving of Muslim support.

Significantly, the Jamaat had rejected the AIMIM, both in 2014 and 2015, as a vote-splitter and a polarising force that would only help the BJP. Why then this change?

Of the four candidates fighting against Sena MP Chandrakant Khaire, the Congress candidate, MLC and businessman Subhash Jhambad, a Jain, is seen as weak.

Independent Harshvardhan Jadhav, who resigned from the Shiv Sena on the issue of Maratha reservations, and is backed by rebel (now expelled) Congress strongman Abdul Sattar, would have been ideal, but was ruled out because of his declaration of support to Narendra Damodardas Modi. Jadhav, incidentally, is state BJP President Raosaheb Danve's son-in-law.

Finally, there is the Samajwadi Party-Bahujan Samaj Party's little-known candidate.

Had the AIMIM put up some other candidate, says Quadri, perhaps the organisation would not have supported the party. IMAGE: Imtiaz Jaleel with Prakash Ambedkar, whose Bahujan Vanchit Manch has an electoral alliance with the AIMIM in Maharashtra.

Jaleel may be bigger than the AIMIM, but he is not quite bigger than party chief Asaduddin Owaisi. Five years of BJP rule have made Owaisi more acceptable than he was in 2014. Even older Muslims who dismissed his party as the BJP's B-team, now defend him as a match for Modi, based on his parliamentary and TV debates, specially his opposition in the Lok Sabha to the controversial triple talaq bill.

In 2014, only young Owaisi fans would raise the Mayawati/Akali Dal parallel to justify the need of an exclusively Muslim party. Today, that argument is made by almost every educated Muslim in Aurangabad.

Part of the reason for this is Aurangabad's special history as a centre of the nizam's and also of Aurangzeb's era -- the city is named after the Mughal emperor. Islamic monuments can be seen everywhere, though often in a decrepit state.

Such is the level of polarisation today that Muslim intellectuals interpret this neglect of architectural heritage, common to most Indian cities, as a sign of Hindu ruling class discrimination. Even the migration of 'outsiders', mostly non-Muslims, for jobs to the Maharashtra Indistrial Development Corporation centres that ring Aurangabad, is seen by them as a planned attempt to change the demographics of the city.

On the other side, Sena MP Chandrakant Khaire, apart from being universally condemned as having done nothing for the city in his 20-year-tenure, is also known for his provocative slogans, specially: 'Khan paahije ki baan paahije? (You want Khan or the bow and arrow, the Sena's electoral symbol', Hirva paahije ki bhagwa pahije? (Do you want the green or the saffron flag?).'

Khaire constantly reminds Hindus not only that they were once ruled by Muslims, but also of the violence wreaked by the nizam's razakars. The AIMIM's history is inextricably linked with the razakars.

How long will you go on remembering an era long gone, I ask a government employee. "That era went only in 1987, after the Sena came to Aurangabad," he replies. "And it is because of Khaire that those domineering traits are today suppressed. Otherwise, we would still be under the thumb of the Muslims."

Interestingly, this gentleman admits that Khaire has little else to commend him, and has nothing but praise for Jaleel.

In the Sena office, I am shown a video clip of Jaleel's speech in which he gloats that the AIMIM would uproot the 'bhagwa' and replace it with the 'green' flag. This clip, as well as clips of AIMIM supporters at Owaisi's rallies shouting 'Naare-e-Takbeer Allah o Akbar' are being played by Khaire at his rallies.

In the last big rally of his campaign, Sena President Uddhav Thackeray asked: 'Shivshahi pahije ki razakari pahije? (You want shivshahi or razakari?)' 'Who came running when Sambhaji Nagar (the Sena's name for Aurangabad) was burnt? Only Shiv Sainiks. Till our last drop of blood we shall protect you!' roars Thackeray.

Expectedly, the Sena version of last year's riots stands in direct contrast to that of the Muslims. The latter point to videos showing Khaire leading rioters, and the role of Sena leader Lachhu Pahelwan, who was arrested after the riots. Sena supporters describe both Khaire and Pahelwan as defenders of Hindus.

Given this scenario, it is easy to see Jaleel's appeal to his community as the candidate of an exclusively Muslim party. It is easy for Prakash Ambedkar's followers to support him too, though for them, Owaisi, the Constitutional expert-MP, matters more. 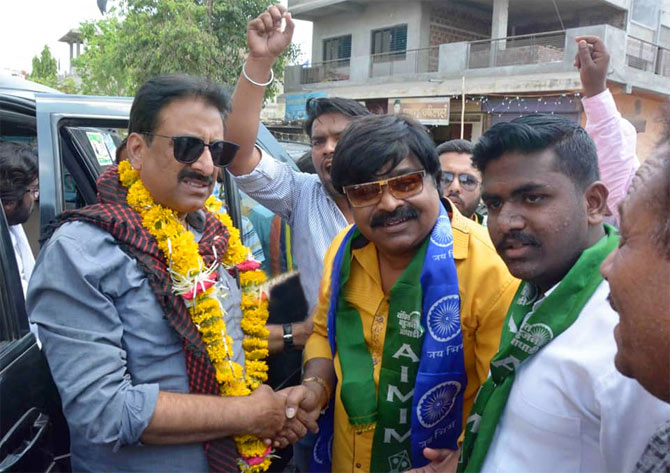 IMAGE: Imtiaz Jaleel on the campaign trail in Aurangabad.

So is the Asaduddin Owaisi-Imtiaz Jaleel combination the best thing to happen to Aurangabad's Muslims this election?

Once again, with a division of Hindu votes between three candidates, and the support of the city's Dalits, Jaleel may swing the seat.

But as always, nothing is so simple.

First, the Congress still has its loyal Muslim voters. While its candidate's city office has Muslims thronging it, their support is far more in the constituency's rural areas.

"The talk in masjids is not for AIMIM," says farmer Kasambhai, who lives in a village not too far from the city. "Muslims here are saying: Kya hum maar khaaney ke liye hi hain? (Are we simply fodder for riots?) We are a minority here who lives in harmony with Hindus."

Obviously then, the Muslim vote will be divided between the Congress and the AIMIM. The Congress is not alone in alleging that Jaleel's sudden candidature was a result of a secret deal with Khaire; even some Muslims say that.

There is another curious phenomenon: While Owaisi camped in Aurangabad for four days to boost his candidate's chances, there were moments when he seemed to be not on the same wavelength as his candidate.

During Owaisi's very first padyatra, the All India Muslim Personal Law Board member declined to enter a Buddh Vihar, while Jaleel did so, along with a Bahujan Vanchit Aghadi supporter.

Incidentally, at these padyatras, which were consciously projected by the AIMIM as some unique back-breaking exercise being undertaken by the 'Barrister-MP', Jaleel remains just one of the crowd that follows the Leader.

Then, at Owaisi's question-answer meeting with Dalit intellectuals (curiously, the city's Muslim intellectuals had not even been told about this meeting), on two occasions he actually added unnecessary comments that undermined Jaleel's replies.

Could it be that the party chief also senses that Jaleel is the 'right man in the wrong party'?