Riding across India for our Faujis

Six intrepid mobike riders undertake a journey from Kashmir to Kanyakumari in support of the armed forces. "We were away from our families for just two weeks and it was so difficult for us. Our soldiers do this all the time and it is just one of the many sacrifices they make for us that we take for granted," says Rayomand Balsara.

A self-confessed fan of the armed forces, Rayo -- as almost everyone who knows the jovial 48 year old calls him -- recently returned from an over 4,700 long kilometre motorbike journey from Kashmir to Kanyakumari.

It took Rayo and his friends -- Vikram Srichand Hemnani, 42; Ravi Agarwal, 43; Sameer Samant; 40; Yogesh Lale, 36; Pradeep Dongre, 57 -- 13 days to complete this marathon ride that they have dedicated to raising both awareness and funds for the armed forces.

Their route took them past cities, towns and villages as five Harley Davidson motorbikes and one Triumph Tiger thundered through broad highways and narrow dusty lanes across the country.

They are donating the funds they have collected, including their own personal contributions -- all of which totals over Rs 33 lakhs -- to the Armed Forces Family Fund this week, but hope their journey will continue inspiring people to contribute to, and support, the armed forces.

The six intrepid riders (and one who rode pillion) belong to the Harley Owner Group and the Riders Association of Triumph.

"The idea for this ride took birth when a fellow HOG, Kailash Bharadwaj, designed and gifted me a flag that reflected the fallen soldier. It struck such an emotional chord with me and my fellow riders that we decided to plan a Cause Ride for these brave unsung heroes," says Rayo. 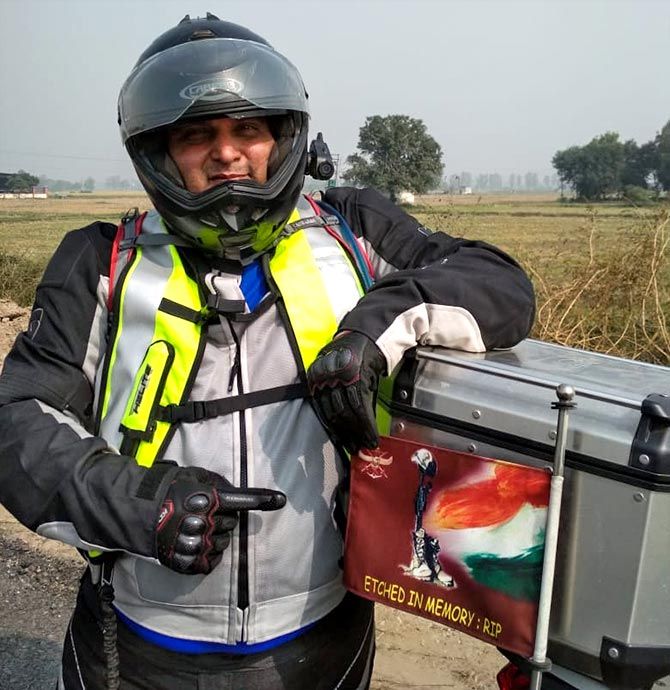 IMAGE: The flag that inspired Rayomand Balsara and his friends to take on their pan-India journey.

Once the decision was made, it took a year for them to plan the journey.

Their bikes were transported by truck to Jammu from where they began their journey on November 11.

But their starting point was the Golden Temple at Amritsar and the Beating Retreat ceremony at the Wagah border. IMAGE: The Beating Retreat ceremony at the Wagah border.

"The ceremony was beautiful and the fervour was unimaginable. You see the sharp contrast in what was once 'one country'. We are indeed privileged to be in India where we have so much democracy and freedom barring a few instances to the contrary," says Rayo. IMAGE: At the Golden Temple in Amritsar.

The 12-day challenge they had set themselves would take them across Banihal, Udhampur (both in Jammu and Kashmir), Pathankot, Ludhiana, Chandigarh (all in Punjab), Delhi, Gurgaon (Haryana), Jaipur, Kota (both in Rajasthan), Indore, Betul (both in Madhya Pradesh), Nagpur (Maharashtra), Hyderabad (Telangana), Bengaluru (Karnataka), Coimbatore (Tamil Nadu), Thrissur, Kozhikode, Kochi and Thiruvanathapuram (all in Kerala) before they finally reached their destination, Kanyakumari (Tamil Nadu).

Here are some glimpses from their journey: At Kota, Rajasthan, after an exhausting ride. 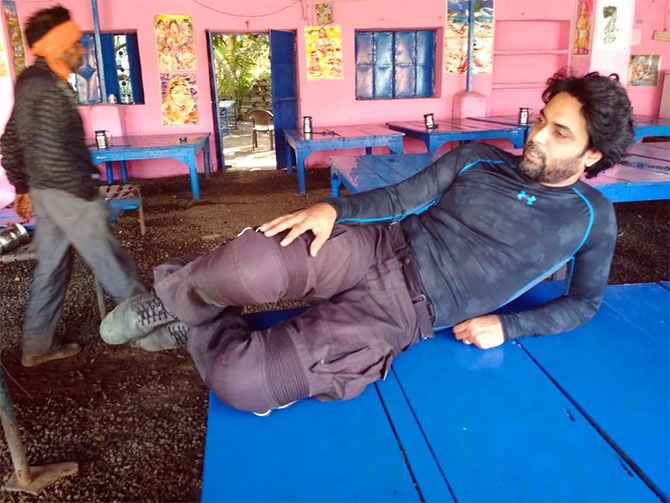 Sameer rests at a dhaba in Rajasthan, as they await yummy aloo parathas for lunch. At every halt, they would evangelise about the reason for their journey, to raise awareness about the sacrifices of the armed forces and to raise money for them.

"We would also them to follow their dreams and not give up," says Rayo. At the Zero Milestone in Nagpur. On November 17, the PRO Defence Nagpur tweeted, 'The team arrived Nagpur from Indore on completion of sixth leg of their ride on 16 Nov evening & were flagged off for their Seventh Leg from Nagpur to Hyderabad by officers and personnel of HQs UM&G Sub Area and 118 Inf Bn form Sitabuldi Fort Ground at 0930 hrs today.' The riders were thrilled to be hosted for breakfast and to "spend time with the brave soldiers of our armed forces," says Rayo. At one of their breakfast stops, they bumped into some enthusiastic cyclists. "Ravi decided to ride a bicycle for a while," grins Rayo. 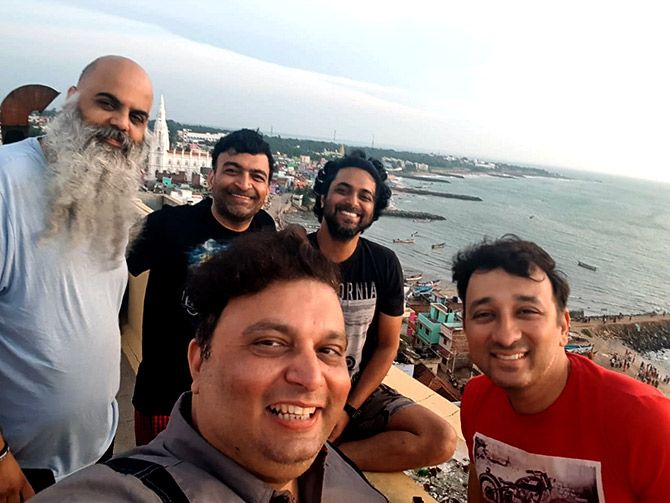 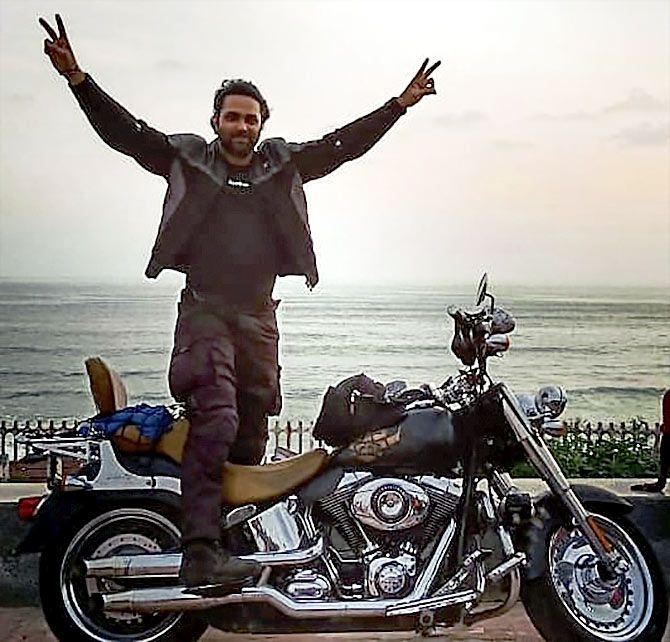 "It was a heartfelt success for us in many ways," says Rayo. "We got to see many parts of our beautiful country. We met wonderful people and we able to share our passion for the armed forces with them. And we were overwhelmed by the support we got."

If you would like to support Rayo and his friends and contribute to the armed forces, you can directly make an online payment at http://ksb.gov.in/FundPayment.htm.
If you do, please drop a mail to Rayo at balsara@indtrans.in, mentioning your name and the amount you have contributed.

A Special Correspondent
SHARE THIS STORY
Print this article