Rahul and Bilawal chatted a lot at lunch...

A guest present at Dr Singh's lunch for President Zardari tells Sheela Bhatt what happened during the meal:

The government, battling allegations that it does not carry along with it Opposition leaders or even its own allies, invited senior Bharatiya Janata Party leaders L K Advani and Sushma Swaraj to the lunch Prime Minister Manmohan Singh hosted for Pakistan President Asif Ali Zardari on Sunday.

According to a guest present at the event, speaking on condition that he would not be identified for this report, "the food, in general, was very good."

On a serious note, he said the meeting between two leaders went off well because the sharp focus is now on economic relations between the two countries.

On April 13, he said the opening of a new gate at the Wagah border would give momemtum to bilateral trade like never before.

The seating arrangement, he revealed, was devised in such a fashion that Congress General Secretary Rahul Gandhi and Pakistan Peoples Party President Bilawal Bhutto, President Zaradari's only son (he has two daughters), sat next to each other. Both young men chatted a lot, the guest added.

He felt the president and prime minister's physical chemistry was good throughout their interactions at lunch.

Union Finance Minister Pranab Mukherjee could not be present because he was not in New Delhi. Congress President Sonia Gandhi cited ill health for staying away from the lunch.

The source, a key member of the Indian team who worked behind the scenes to make the encounter a success, told Rediff.com, "In the 40-minute meeting between two leaders, what more could be discussed? The visit was for a few hours, and in that respect the meeting was a success."

When asked about Lashkar-e-Tayiba founder Mohammad Saeed, the source said, "The bounty declared against him is an issue between the United States and Pakistan at the moment. India is concerned about the problems he (Saeed) creates for us."

That India and Pakistan's home secretaries will sign a visa agreement soon, the source said, is not a small step.

At the end of the lunch, Dr Singh told President Zardari, 'Since you are going to Ajmer Sharief, please pray for the peace of both countries.' 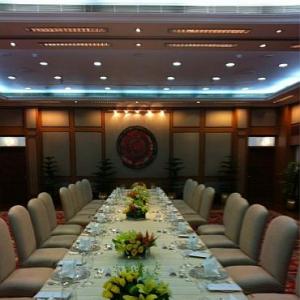 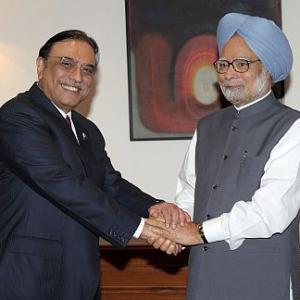