Mumbai gets its aquarium back, but don't expect a world-class one

Fish-lover Rajesh Karkera revisits Taraporevala Aquarium V2.0 after decades and comes back with mixed feelings. It has a touch pool, an oceanarium, but is this all what that the city was promised?

Mumbai’s Taraporevala Aquarium will always remain special to me. It was my first exposure to the world of underwater life, which subsequently developed into a passion, so much so that my home has always had a reasonably-sized fish tank.

I can still recall my first visit to the aquarium decades ago -- the turtle that glided through the water in Zen-like equanimity.

I was barely three when I went to the aquarium for the first time, my aunt and uncle taking me by the hand. Soon, it would become a must-see during the holidays.

The 64-year-old aquarium was my gateway to a whole new world; it was simply mesmerising. All I could see were the fish; their beauty made the glass walls of the tanks disappear. Even the aquarium’s concrete walls did not seem to matter just like the background to the tanks. All that mattered were the little creatures -- floating, diving, swimming -- that gripped my attention. Along with them even I floated into another world, its inhabitants colourful, graceful. Did the fish know I was staring at them in wonderment? Were they oblivious to the other species that trooped in every day, morning to evening?

I was clueless then and I am clueless now. But I know the impact, the pull, they exerted on me. In particular that magnificent turtle.

But Bombay being Mumbai, all good things must come to an end. The aquarium soon fell on bad days, as Indians became more globally peripatetic, somehow the Taraporevala Aquarium didn’t hold the same charm as its state-of-the-art counterparts overseas. Slowly the footfalls declined, the aquarium started looking down in the mouth, and ground its way to closure in 2013, with a grand promise of being back bigger and better.

What of the creatures inside, I have no idea, but it’s a fair bet that they perished. I would often think back to those days of innocence, missing them enormously. Making up for the lump in my throat was my own decent-sized fish tank at home, housing a variety of my favourite fish. The Hawkbill Turtle, also known as the Common Sea Turle, getting acclimatised at the aquarium. Photograph: Rajesh Karkera/Rediff.com

Now, after 37 years, when it was announced that the aquarium was being given a fresh lease of life, I was overjoyed. There are certain things a city such as Mumbai, staking a claim to international status, needs to have, and a well-maintained aquarium is one of them. I couldn’t wait to see the new-look aquarium for myself! And memories of that turtle kept rushing back.

My return to the aquarium, on Mumbai’s iconic Marine Drive, was mistimed. I had gone by newspaper reports about its opening but when I reached the venue I was met with an announcement that it had been delayed.

Disappointed along with me were scores of children, accompanied by their families, and other enthusiasts. But I had press card, which I furnished with child-like enthusiasm. After taking the necessary permissions with a promise to write about the aquarium, I was allowed inside, again into a world that once upon a time so consumed me. 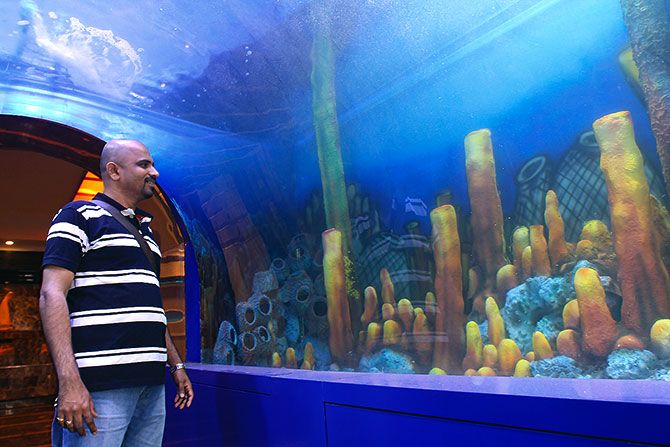 Rupesh Utekar of Utekar Fisheries inspects his design of the plexi tank at the entrance. Photograph: Rajesh Karkera/Rediff.com

Will the new aquarium be home to that turtle, I wondered as I revisited my favourite childhood hangout. And there he was!

He had just been brought in and was getting acclimatised to the new surroundings. I just stood there and watched in awe like I did when I was three. 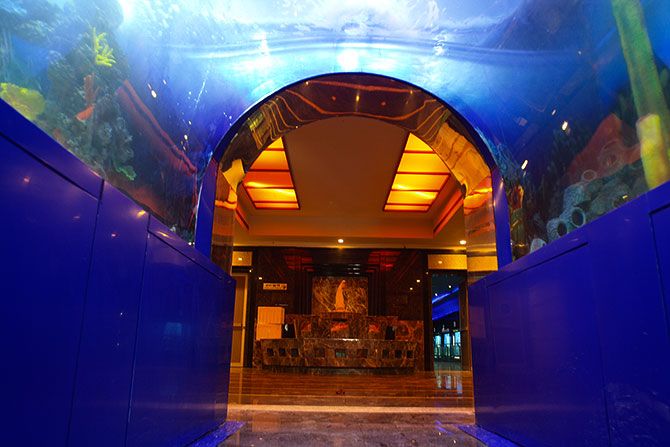 The oceanarium at the foyer is made up of 4.5 inch think Plexiglass and holds a total water capacity of 22,000 litres. The tank's dry weight is 5.5 tonnes. Photograph: Rajesh Karkera/Rediff.com

As you enter the aquarium, you will be greeted by its biggest promise, the oceanarium (photograph above), so please take your time, pause, and just look around. It’s a short walk, just three steps, so if you rush you will probably miss the whole experience.

This is made of four-inch thick glass. You can see the fish swimming overhead, which regardless of the size, is an impressive feeling. It’s a fantastic attempt, keeping in mind Mumbai’s limited space availability, to provide for a world-class experience. I, too, was expecting an underwater walk, not just a couple of steps, but I understand the constraints. That doesn’t mean I was bowled over; it is only a marginal improvement to what existed early, and by no means will it blow your mind -- unless, like me, you feel a kinship with the water world. 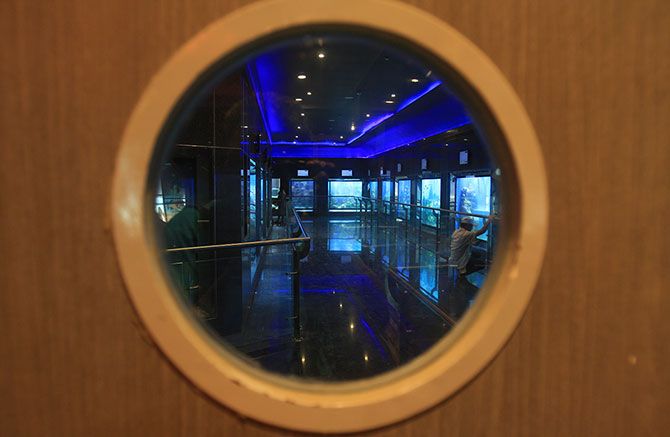 The basic structure of the aquarium is the same as it was years ago; in that sense nothing much has changed. Photograph: Rajesh Karkera/Rediff.com

Inside, straight ahead, is where the main marine and freshwater fish are preparing for their stay in their new habitat. A couple of men are still working on giving the final touches. On the right is the home aquarium section, fully ready for the world to see. A worker walks past the stretch of fish tanks in the aquarium while giving final touches to the place. Photograph: Rajesh Karkera/Rediff.com

The main section first. To the right, on the walls, are marine tanks, with fish from the sea, and on the left are the freshwater tanks full of creatures from rivers and lakes. 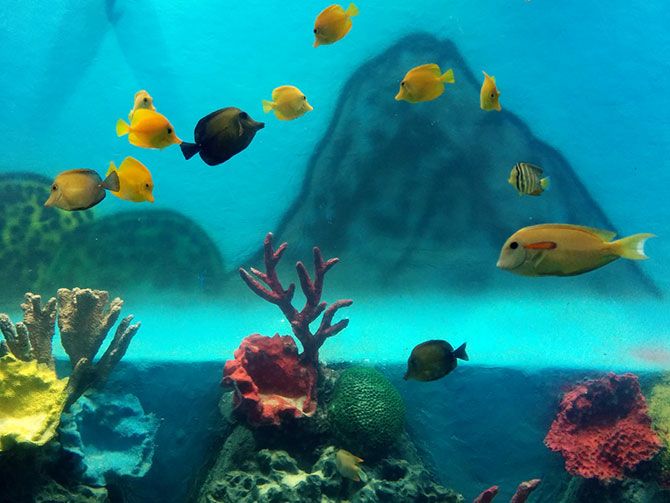 Seen above is a colony of saltwater fish, mainly the Yellow Tang, also known by their scientific name of Zebrasoma flavescens. These fish are about as brightly coloured as they can get. The fox fish seen above is very peaceful except when around similar fish. Predators normally leave it alone because of its venomous dorsal spines. 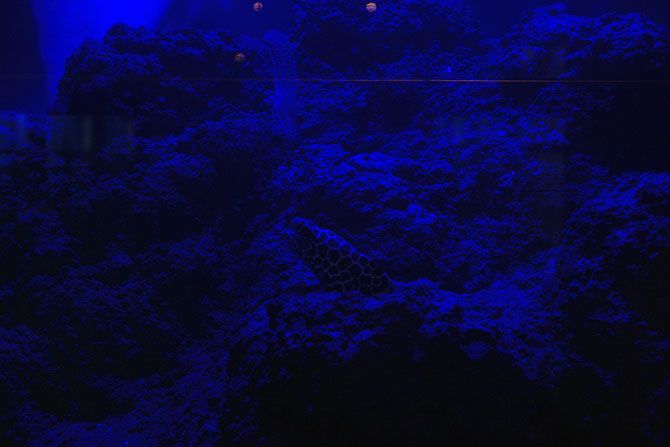 The Moray Eel, above, with its blue, dark, eerie-looking tank makes for an interesting view. The Moray Eel is a nocturnal fish, which likes to live in holes in the ocean bed and reefs and is always ready to catch and eat up any small fish that comes wandering by. 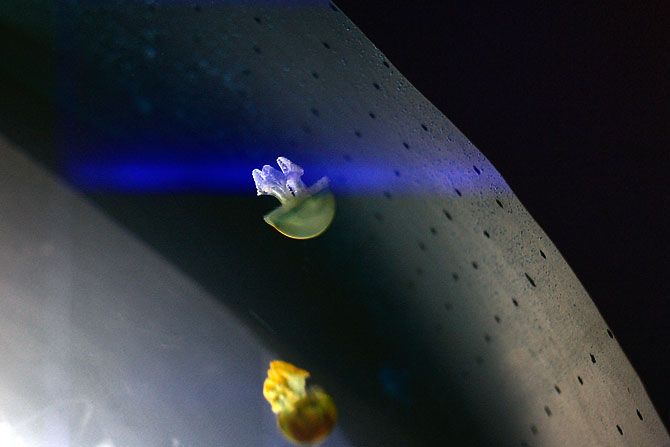 I think this is the first time I have ever seen jellyfish in India (photograph above), and is a unique addition to the aquarium. These are on commercial display in India for the first time, inform officials. They're quite small, and I would have loved to see them in a much bigger tank!

For your information, jellyfish do not have a head, heart, brain or bones! 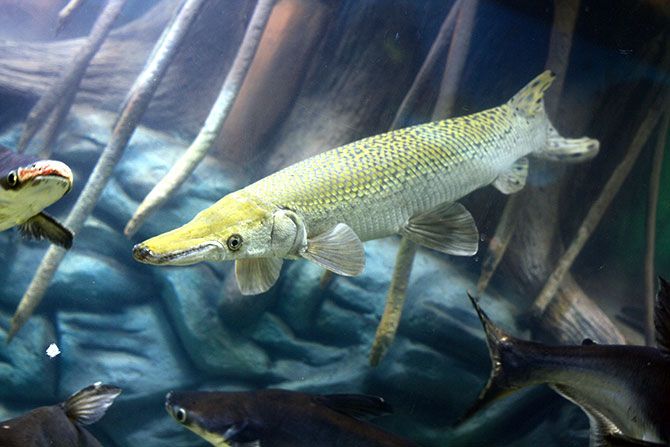 Moving on to the freshwater section, what grabs your attention completely is the alligator-type fish that is moving about majestically. It seems to have a frighteningly huge and prehistoric appearance (photograph above), with a snout that gives it its name. But this is one fish that has been misunderstood by many. Called the Alligator Gaar, these harmless fish have been on earth for more than 150 million years, easily predating us humans, and are still hunted for their fierce looks. Its only defence, its appearance, spells its death! 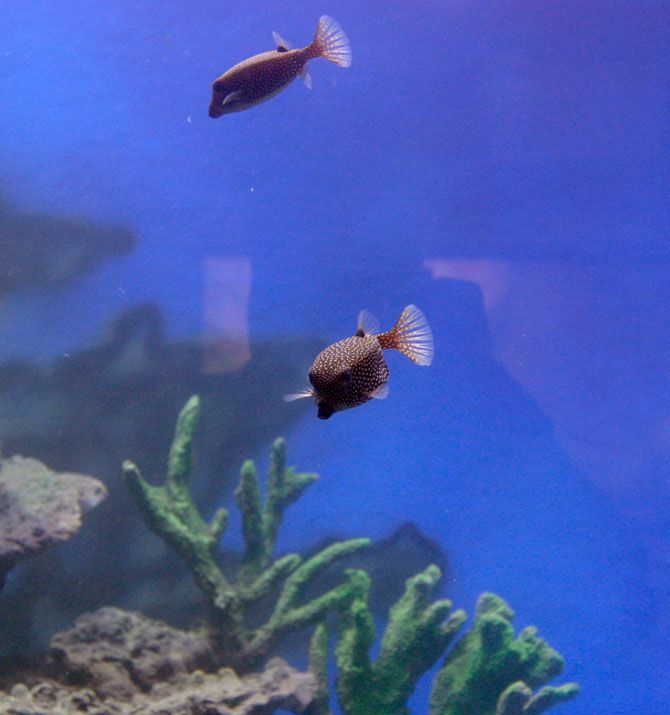 These adorable, comical-looking fish above are called Puffer fish. They are curious by nature and will come close as you peep through the glass. But any sudden movement and they will bloat up like a balloon, up to three times its size! This is their defence mechanism. They have the ability to gulp in air or water and puff up like a ball to frighten away enemies. 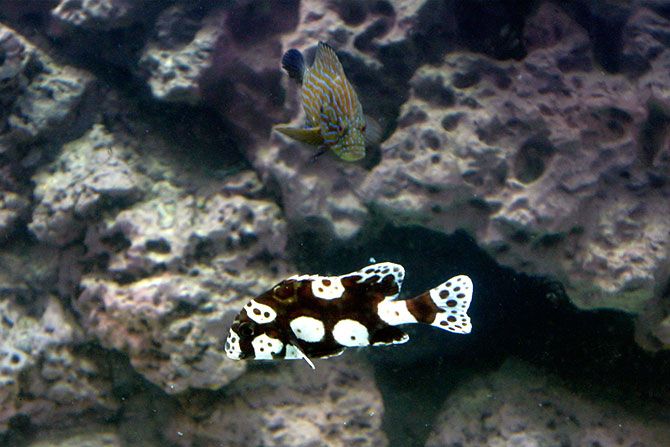 Then there is this brown and white clown-like fish, above, the Sweet Lips Grouper found mostly in the Indian Ocean. This is a juvenile and mostly mimics the movements of the poisonous flatworm for defence against predators. They gain more spots which reverse from white to black as they age. Also seen above is the Neon Okara Chichlid just above  the Grouper. Another small section is the home aquarium setup above which has angel fish, gold fish, etc. 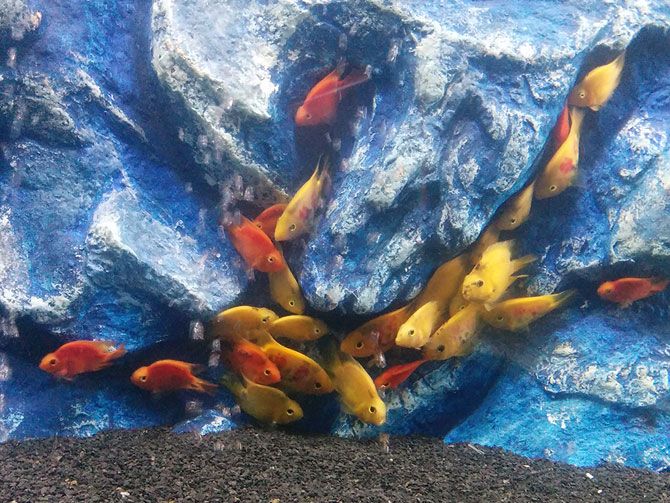 These are the brightly colourful Parrot fish (photograph above), which are artificially grown. They cannot breed by themselves i.e. they do lay eggs which never hatch. These are very shy and can be tamed to respond to you in a few weeks. 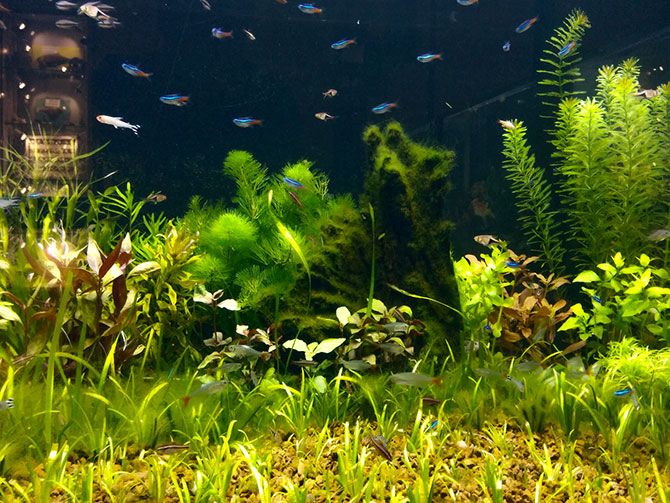 The next display is a planted tank in the home aquarium section. This setup requires a lot of hard work, like specific lights, artificial CO2, etc so that the plants can undergo photosynthesis and produce their own food and release oxygen. The fish in these tanks are called tetras. Seen here are 'Neon Tetras' which reflect light and look like they run on electricity. 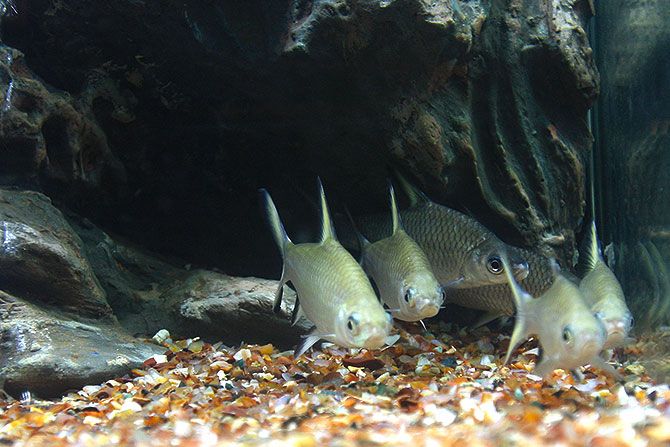 Next up were some scared-looking aquarium sharks, above. These are only called sharks, and actually have no relationship to the sharks of the ocean. The new-look aquarium will also have an amphitheatre, above, a small comfy-looking hall in which documentaries on underwater world etc will be screened. 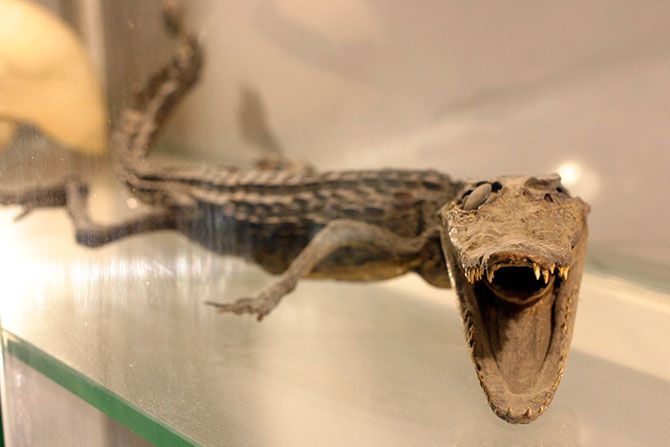 The aquarium once had a room which housed fossils, corals, seashells, bottled and preserved exhibits but it has now been reduced to just displays on the walls. Of them, this fossil of a young crocodile will surely be the centre of attraction.

Walking out, I couldn’t but pray that lessons have been learnt and this time the authorities will maintain the aquarium well.

The refurbished Taraporewala Aquarium will open to the public on March 3, 2015. Cost of entry: Rs 60 for adults; Rs 30 for children and students with ID cards. There will be an extra charge for still and video cameras.