Hitesh Harisinghani/Rediff.com takes us on a tour inside the iconic BrihanMumbai Municipal Corporation headquarters, whose doors were thrown open for the first time ever for tourists. IMAGE: The BrihanMumbai Municipal Corporation headquarters. The main dome on top has water tanks concealed under it which were used for firefighting and for running the hydraulic lifts in earlier times. All photographs: Hitesh Harisinghani/Rediff.com

The BrihanMumbai Municipal Corporation, in association with the Maharashtra Tourism Development Corporation, launched a tour URBS PRIMA: Inside the BMC headquarters this month.

The architecture is in Victorian Neo-Gothic style, like many buildings in south Mumbai's Fort area.

The tour of the BMC headquarters began at the selfie point outside the building and continued through the main porch, to the halls and the offices, a floating staircase, a viewing gallery and finally to the dome.

Scenes from the must-do tour for Mumbaikars and visitors to India's incomparable city: IMAGE: The grand staircase with two lions welcomes you as you enter the BMC premises. The lions seem to be inspired by Venetian lions and are believed to symbolise authority and dominance over Land, Sea and Air. IMAGE: The building has two domes. The main dome visible from the outside and an inner dome that is visible from inside the main foyer. IMAGE: Architect F W Stevens had studied council halls across Europe before he was hired to design Bombay's Corporation Hall. IMAGE: A close up of the Mayor's chair which travels wherever the Mayor conducts her/his meetings inside the BMC premises. IMAGE: The original stained glass were of various shapes and sizes, some of which have been restored as part of conservancy initiatives undertaken over the years. 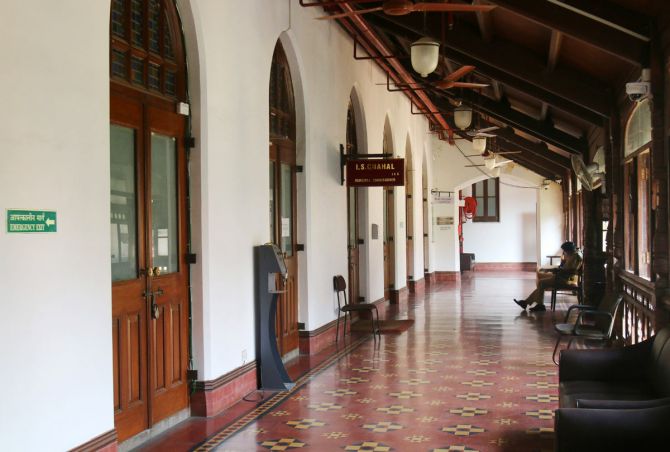 IMAGE: The tall and imposing feature of the building, its soaring tower surmounted by the dome rises to a height of 235 feet, which is 20 metres taller than the Chhatrapati Shivaji Terminus building opposite the BMC. IMAGE: A close up of the dome which has gilding work on it.