In the face of climate disaster, a new environmental movement by the name of Extinction Rebellion has risen up, and they will make sure you hear their plea -- ‘To governments of the world: we declared a climate and ecological emergency. You did not do enough. To everybody else: rebel’

The environmental group, which was founded in the United Kingdom, has planned a large coordinated movement -- called International Rebellion -- in more than 60 global cities.

Demonstrators blocked roads and bridges leading to the Palace of Westminster in central London. They staged a “die-in” in Wellington, New Zealand. They obstructed a major roundabout in Berlin and splattered fake blood on Wall Street’s “Charging Bull” sculpture.

Here are some of the most powerful images from the movement. 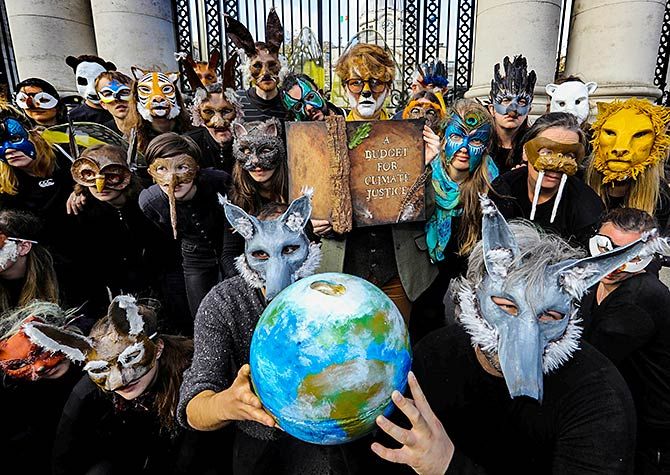 Extinction Rebellion called on the Irish government to live up to its "moral and political obligation" to adopt a "budget for climate justice".

Among other things they want to see "adequate funding" for bus and cycle lanes and "greater priority given to these modes of transport".

They also called for meaningful measures to reduce fossil fuel emissions to zero by 2030.

Extinction Rebellion protests have so far been the biggest in Britain. Protesters have vowed to carry out a "Hong-Kong style" occupation of a London airport as they continue two weeks of demonstrations demanding urgent government action on the climate crisis. 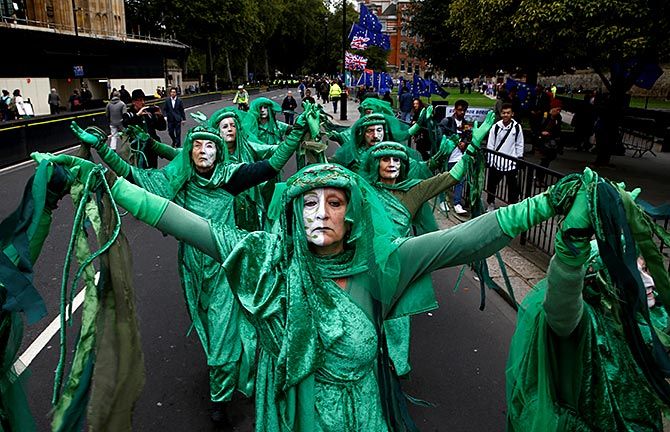 More than 200 protesters were arrested on Wednesday, bringing the total number of arrests to 800, including a 92-year-old man, after they blockaded 12 key sites around Westminster.

London Mayor Sadiq Khan conceded that “bolder action” is needed to take on climate change, but he criticized the movement for potentially overwhelming an already stretched police force.

The climate change activists are blockading government buildings and demanding what the plans are for the climate emergency.

Protesters have also brought chaos for commuters, closing down a large area of central London.

Climate activists in Australia blocked roads, entered banks and energy companies. In Sydney, police were seen dragging elderly people and men in suits through the crowds as massive groups blocked roads in and out of the city. In all, police in Australia arrested about 30 people. 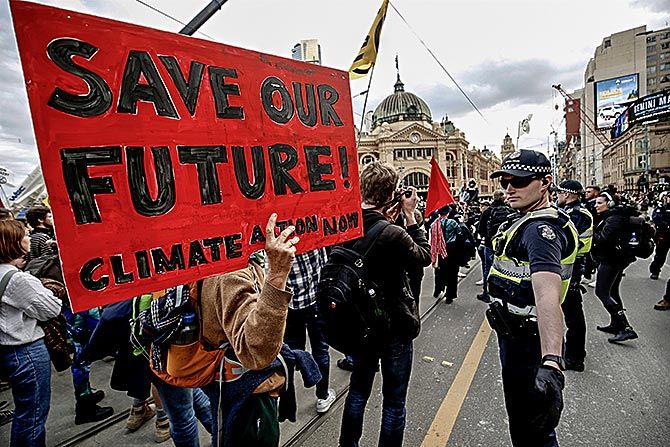 Extinction Rebellion's Australian arm makes similar demands to its British parent, stating that the government must declare a climate and ecological emergency, and must act now to halt biodiversity loss and reduce greenhouse gas emissions to net zero by 2025.

In Melbourne, a crowd of around 150 gathered in Treasury Place to deliver a Climate Emergency Declaration to a government building. They marched in protest against both the state and federal governments.

Parallel events were held in Sydney, Brisbane, and Adelaide.

In New York, protesters doused the famous charging bull statue with fake blood as part of a protest against climate change. 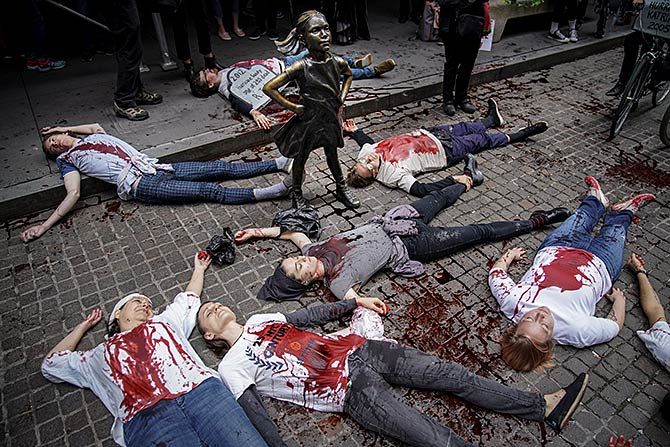 IMAGE: Environmental activists participate in a die-in during a rally for action against climate change near the Wall Street Fearless girl in the Financial District in New York City. Photograph: Drew Angerer/Getty Images

Similar protests have been carried out in Portland, Oregon and in cities such as Los Angeles, Chicago and Washington, DC.

Justin Becker, who helped organise the NYC protests, said they chose to demonstrate in the Financial District because the fossil fuel industry is directly connected to the financial interests of Wall Street.

Demonstrators blocked roads and bridges leading to the Palace of Westminster in central London. They staged a “die-in” in Wellington, New Zealand. 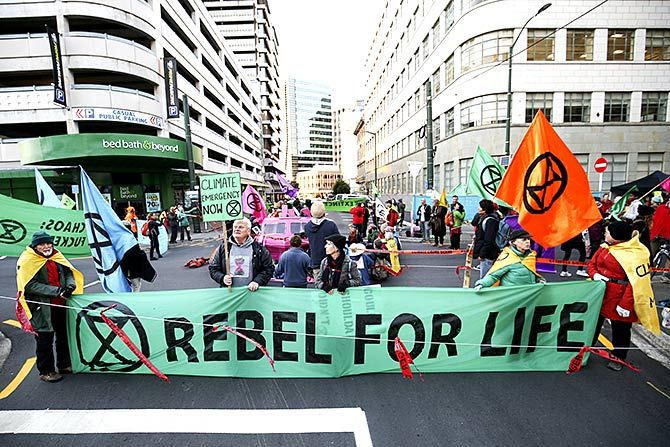 The demonstrators in Wellington stopped buses going to and from the downtown bus terminal, as well as other traffic.

Extinction Rebellion members said they would risk arrest to pressure the government to take swift action on climate change.

New Zealand Prime Minister Jacinda Ardern said that people were free to protest but that “blocking people from being able to go and do their day-to-day job doesn’t necessarily take us any closer to the climate action they are calling for.”

The movement spread to Germany too with hundreds of people camping outside of Germany Chancellor Angela Merkel's office in Berlin. 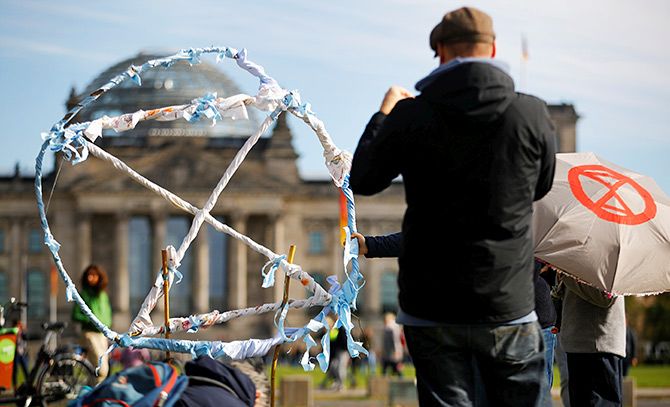 IMAGE: People set up an Extinction Rebellion symbol at a makeshift camp of climate activists next to the Reichstag building in Berlin, Germany. Photograph: Hannibal Hanschke/Reuters

Others blocked the Grosser Stern, a traffic circle in the middle of the German capital's Tiergarten park dominated by the landmark Victory Column.

At the protests, the activists expressed their dissatisfaction with a climate policy package drawn up last month by Merkel's government.

"We all share an interest in climate protection, and the Paris climate targets are our standard in this," he told ZDF television. "If you demonstrate against or for that, that is OK. But if you announce dangerous interventions in road traffic or things like this, of course that is just not on."

He dismissed the idea of declaring a "climate emergency," saying that the German constitution doesn't provide for such a thing and it wouldn't translate into "concrete action."

Protesters under the Extinction Rebellion banner blocked streets in Paris this week to denounce what they call the government’s “inaction” against climate change. Several gathered in Place du Châtelet, and blocked the Pont au Change and the Quai de la Mégisserie in Paris. 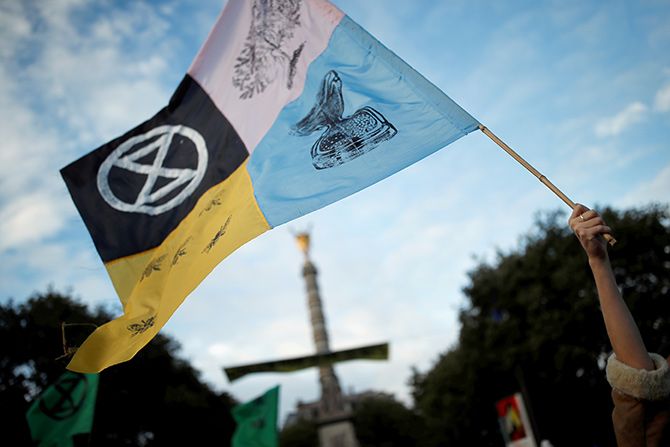 Image: Demonstrators wave the flags as they block a road during the Extinction Rebellion protest in central Paris, France. Photograph: Christian Hartmann/Reuters

Some protesters linked arms in groups of four or five people, and threaded their arms through plastic tubes, to make it harder for police to disperse them in the event of an intervention.

Further “rebel” protesters sailed a boat down the Seine River, between Châtelet and the Eiffel Tower, draping their ship with green and red XR flags. 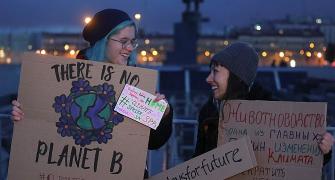 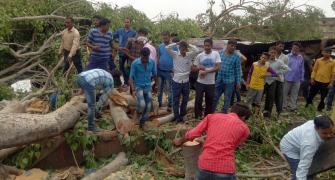 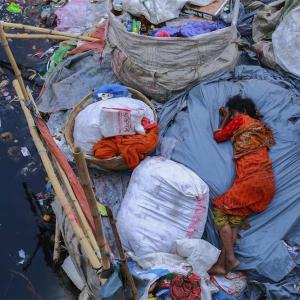 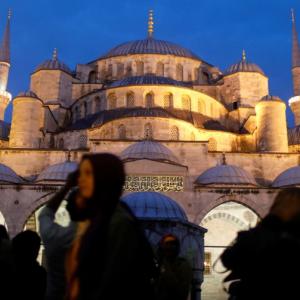