'Politics is about caste in Eastern UP and religion in Western UP.'
Travelling on a UP government bus in Western Uttar Pradesh, Rediff.com's Archana Masih gets a sense of the fault lines in this election's most volatile region -- that can make or break the future of political parties in UP.
Photographs: Seema Pant 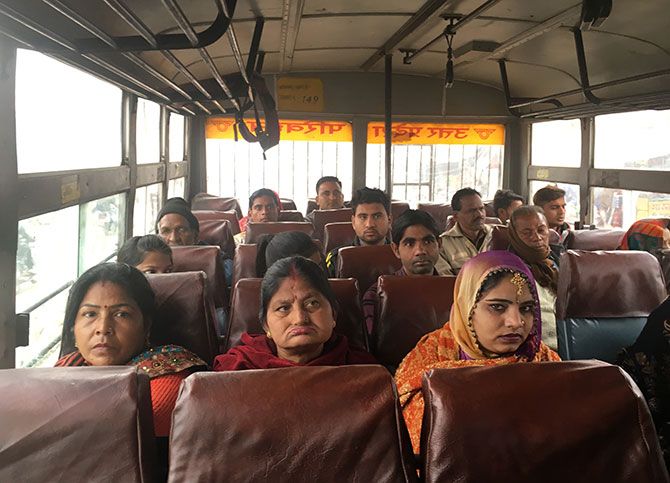 IMAGE: Passengers on a UP Roadways bus from Dehradun, Uttarakhand, to Saharanpur, Uttar Pradesh.

Without any broken windows or ripped seats, the on-and-off bumpy ride in a UP Roadways government bus required the constant clutching of the bar on the seat ahead, but barring the peanut shells littered on the floor, it was fairly clean and comfortable.

With instructions written in Hindi about not putting any body part outside the window and a toll free number for reporting any complaints about the driver in case he was drunk or driving rashly or misbehaving, the bus made its way through North India's fog.

Full to almost capacity -- including bundles of vegetables in the last rows -- there were several women and a single girl sitting with earphones in the first seat by the gate.

"It is safe. Girls travel in the bus till late in the evening. There are two lady conductors on this route," says Brijesh, the conductor, a temporary staffer of UP Roadways, visibly upset about not being made permanent 10 years after being hired.

Inducted into the department under the Mayawati-led Bahujan Samaj Party regime, he was earlier paid 32 paise per kilometre which was raised to Rs 1.17 paise per km 5 to 6 years ago, he says.

Calculating the number of days, he works, he makes around Rs 10,000 odd a month.

"Akhilesh Yadav has improved the big roads and improved the quality of buses, but the smaller roads on the bus routes need to be worked upon. But what I find deeply upsetting is that though the temporary staff put in more hours, those who were hired after me have been made permanent," he says, dejection writ large over his face.

"I gave them training and today they earn more. I have to call them sahab, sahab."

The job is a majboori, he continues. "Whatever dreams I had have been crushed." Dejected as he is and not interested in politics, he is going to vote for the Bharatiya Janata Party because that's what people around him have been saying.

O P Garg, a retired school principal, in the seat behind, says it is Narendra Modi's image that will still dominate the BJP's poll narrative.

"He works harder, you can't even work like he does. He is able to communicate his message to the people clearly. I have not seen a leader like him. He has impressed me," says the teacher, folding the Hindi newspaper he has been reading. 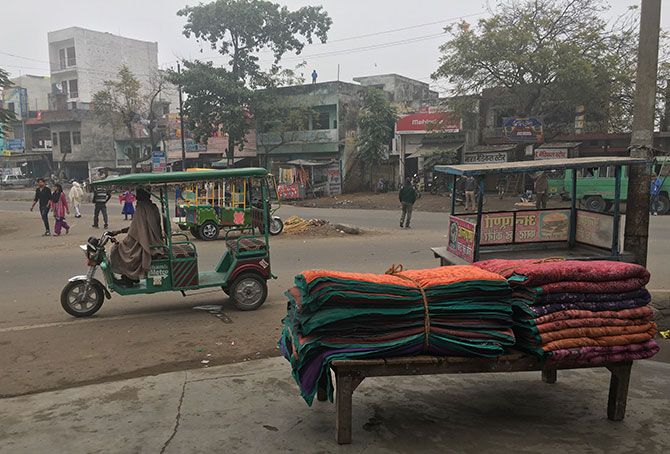 The BJP won only one assembly seat in Saharanpur district in 2012, but in the Lok Sabha election of 2014, it won the Saharanpur Lok Sabha seat with a lead in five of the seven assembly segments -- and swept western UP.

"Notebandi ki barf to bas kala dhan walo par padi hai (the avalanche of demonetisation has fallen on black money hoarders), even if you had 1.5 lakhs, where was the problem? You could just go and deposit the money, koi dikkat nahi," the teacher adds.

Giving us an example of how Modi is bringing change directly to the people, he says earlier you could not get a gas cylinder in time even if it was in your name.

"Now even if you book it online at 1 am, the cylinder will be at your doorstep in two days, that's the biggest change in my personal experience."

Uttar Pradesh is a large state and can't be expected to vote in a uniform pattern, especially in a state election.

"Purab mein jati ki rajniti aur paschim mein dharm ki (Politics in eastern UP is based on caste, while in western UP it is religion)," says Ravindra Mishra, a shopkeeper in Chhutmalpur.

The deep polarisation of the Hindu-Muslim vote in the shadow of the Muzaffarnagar riots in 2013 propelled the BJP to power with the party winning 71 of UP's 80 Lok Sabha seats.

The religious dynamics once again remain a potent factor.

Even though Hindus are in a majority, the percentage of Muslims is higher in Western UP than in the rest of the state.

The mandir and masjid share a common wall in the small town of Chhutmalpur in the Behat assembly constituency, surrounded by factories, but it does not take time for a clash between the two communities to take a communal turn in the region, says Sahil Kakkar, a young shopkeeper selling wedding decorations in Punjabi market.

"The reputation of Western UP has fallen to such depths that people don't want to marry their daughters in this area. The law and order situation is not good," says his father, who has lived in the town all his life.

"Though the girls' families don't say it upfront, in between the lines, my reading is that they don't want to send their daughters this side," Mr Kakkar adds.

Dismissing his father's observation by a wave of his hand, Sahil says Chief Minister Akhilesh Yadav has projected himself as a pro-development, forward looking leader, but this part of UP, bordering Uttarakhand, is like the step child.

"Nothing has changed here. We seem to be too far from Akhilesh's sight," says Sahil, whose brothers work in Chandigarh and Mumbai. 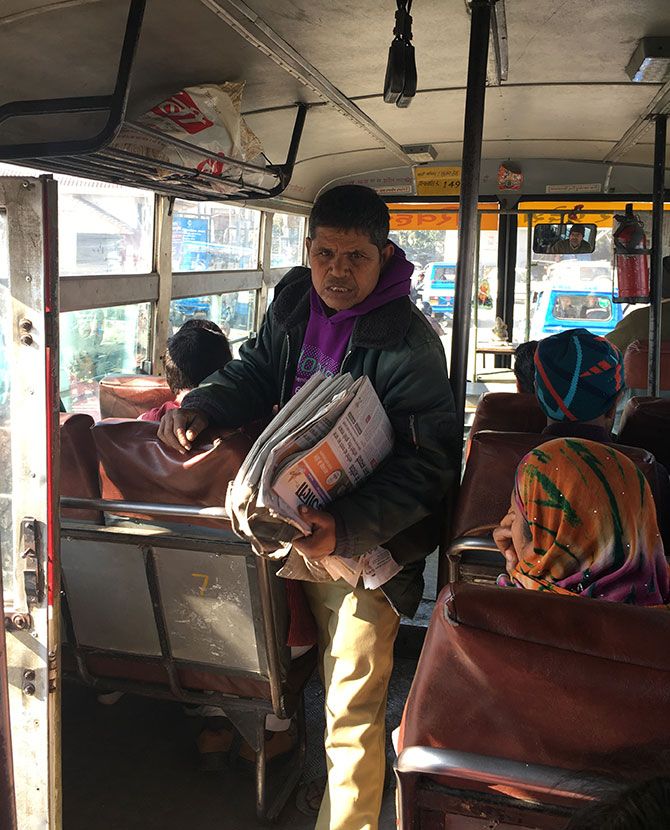 IMAGE: A newspaper vendor inside the bus that had several students getting off at colleges en route to Saharanpur.

The significance of the area is representative of the fact that Saharanpur, the district HQ, is where Modi began his UP election campaign.

It was also a venue for Congress Vice-President Rahul Gandhi's khat sabha.

With nearly 42% Muslims and 22% Dalits, it has been a BSP stronghold. The BSP won four of 7 assembly seats in the district in 2012.

The BSP has not lost Behat, the assembly constituency where Chhutmalpur lies, since 2002. However, two BSP candidates have left the party to join the BJP.

Four of the 7 BJP candidates in the area have come from other parties.

"Let's see who the Muslims will vote for? BSP or the SP-Congress alliance this time."

In its seat sharing alliance, the Congress received more seats than the SP in the area and is eyeing the Muslim vote, just like the BSP.

With the election on February 15, people are still to make up their mind and it is to be seen which way the vote will shift.

"The Congress was such a big party and it has been reduced to a junior role with the SP in UP," says Ravindra Mishra, whose father is the only one in the family who might vote for the Congress because he is still connected with that old Congress "vichardhara" (way of thinking)

"Rahul ki baton se koi jud nahi raha hai, par yeh bhi nahi keh sakte ki BJP jeetegi (people are not able to connect with Rahul but neither can the BJP can be sure of a win)," Mishra says, ruing the fact that very few politicians wear khadi kurta-pyjama, preferring the ones sold in malls instead.

Archana Masih in Chhutmalpur, Saharanpur, UP