News
Business
Movies
Sports
Cricket
Get Ahead
Money Tips
Shopping
Sign in  |  Create a Rediffmail account
Rediff.com  » News » Pakistan knows India is on a different level with the US

'Both India and Pakistan are now, for the first time in history, very closely allied and connected with the US -- economically and politically.'
South Asia expert Shuja Nawaz speaks to Aziz Haniffa/Rediff.com in Washington, DC. 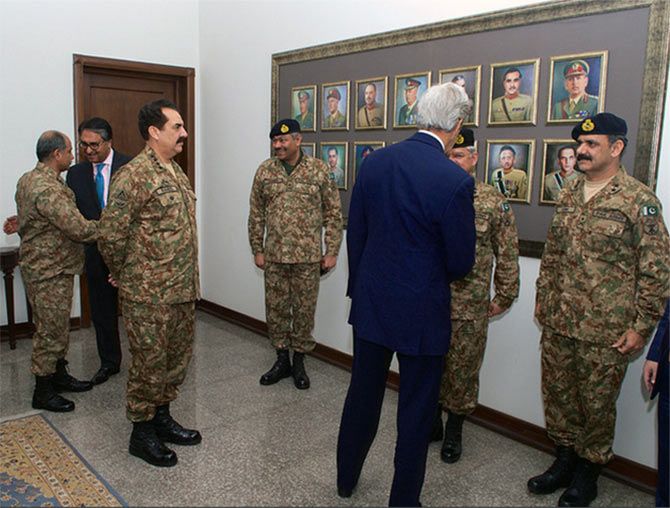 IMAGE: Pakistan army chief General Raheel Sharif, third from left, introduces US Secretary of State John Kerry to some of his top generals before a military briefing during his visit to Pakistan's army headquarters in Rawalpindi, January 13, 2015. Photograph: US State Department

Perhaps no South Asian strategic analyst in Washington, DC, is as well plugged in with the Pakistani government and its military as Shuja Nawaz, till recently the Atlantic Council's first Director of the think-tank's South Asia Centre.

Nawaz, currently a Distinguished Fellow at the Council's South Asia Centre, diving into the controversy that the office of the US Special Representative for Afghanistan and Pakistan (SRAP) would shortly be folded back into the South and Central Asian Affairs (SCA) bureau, said while it was unlikely, debunked concerns in New Delhi that if it happens it would necessarily lead to re-hyphenation of US policy toward India and Pakistan.

In an interview with Rediff.com, Nawaz acknowledged that he is a strong proponent for a merger between SRAP and SCA, and said, "I believe (Secretary of State) John Kerry was inclined to change the situation last year, but he did not calculate the power of the bureaucracy to slow things down and so it's not a fight he wanted to get involved in."

"Also, with the transition in Afghanistan, I believe they wanted to continue the Af-Pak position through 2016," Nawaz said, and noted, "The appointment of Rick Olson (as SRAP) was an indication that they wanted somebody who knew both countries."

"If you recall," Nawaz said, "he had served with the rank of ambassador in charge of economics in Kabul, then he had also served as ambassador in the UAE, so he knew the region, and then, of course, his most recent posting was in Pakistan (as US ambassador)."

"So the Af-Pak position for him was a kind of a natural progression, giving the administration a little time to change over."

"I've been following the debate on why to hyphenate or why de-hyphenate and the hyphenation, at least from my point of view, is not simply between Pakistan and India, but putting both of them in he same wider regional grouping," Nawaz said.

"It would allow regional decision-making to take place," he argued, "and so, the US could work with countries as a region rather than dealing bilaterally with four or five."

"At the same time," Nawaz said, "I don't think this will downgrade the growing US-India relationship because that has its own trajectory and its own objectives, which extend beyond the region."

"Now this will not change some of the other boundaries that exist for the US government and I believe it's worth pointing them out. The Pentagon still has the very rigid boundary with PACCOM (Pacific Command) and CENTCOM (Central Command)."

"I've met some retired senior military people who have said they regretted this strict boundary because it did not allow India to participate in a lot of the task forces and activities in the Indian Ocean because it involved moving into the Red Sea and the Arabian Sea and so on," Nawaz said.

Thus, he believed, "the Pentagon will probably need to think about either making these boundaries more porous or eliminating them and reshaping its relationship, because now a guy sitting in Hawaii is essentially dealing with India -- that's a long way -- and CENTCOM is next door in the Gulf and they have regional headquarters there."

Asked if the powers that be in Islamabad were for a merger or if it really does matter to them at all, Nawaz said, "My understanding from very senior foreign affairs persons in Islamabad last year was that they were for it and they had understood that Kerry was ready to make a change rapidly."

"At that time, I advised them that I didn't think that Kerry would be able to make such a rapid transition because there were enrenched interests and there is an active debate going on within the system," Nawaz said.

Asked if Islamabad would like a merger because at some level they may perceive that this puts them on par with India, he said, "There is no question that India and Pakistan are on different levels and that's a reality that is understood."

But he reiterated that a merger makes it easier to communicate, to bring the US into the discussions, which Pakistan has favoured and India has not -- "India doesn't want the US to be the third person in the room."

"So, these are things that will have to be addressed within South Asia, but the point is both India and Pakistan are now, for the first time in history, very closely allied and connected with the US -- economically and politically."

Since Olson comes with a wide swath of connections in Pakistan and Afghanistan and his decades of experience, technically since he would erport to Assistant Secretary of State Nisha Desai Biswal in the case of a merger, Nawaz said, it would have been a difficult scenario.

"This is probably one of the reasons why it (a merger) is likely to be delayed till the end of this year, because then, whatever change that occurs will be under a new administration come January."

"The other critical thing," Nawaz said, "is that they would want to maintain the focus on Afghanistan and Pakistan, while Afghanistan is going through a very difficult political and military transition itself."

"By the end of the year, there should be a little more clarity about the future of US forces in Afghanistan -- will they go down to zero or will it remain at the current levels?"

Unlike the first turbo-charged SRAP Richard Holbrooke -- who at one time was asked not to come to Kabul by then Afghan president Hamid Karzai -- Olson "has a very good equation with (Afghan President) Ashraf Ghani and in Islamabad," Nawaz said.

"He knows everyone and he understands them. He has a good relationship with the army in Pakistan also and that's what makes any ambassador effective on a regional basis."

"Another element in this is Iran," Nawaz said and argued, "with the sanctions being lifted, that will likely change Iran's regional participation in Afghanistan on the one hand and with Pakistan and India because trade is going to start in an unfettered mode."

"And with the sanctions removed, who knows, it might be possible for India to participate in the reopening of the IPI -- India, Pakistan, Iran pipeline -- and maybe even an oil pipeline because remember, the Ambanis have a very big refinery near the Pakistani border, which I am told is specifically designed among other things to deal with Iranian crude."

"These kinds of second and third tier effects," Nawaz predicted, "are likely to be quite important on a regional basis." 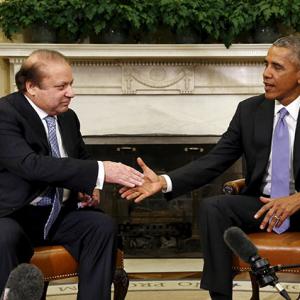