News
Business
Movies
Sports
Cricket
Get Ahead
Money Tips
Shopping
Sign in  |  Create a Rediffmail account
Rediff.com  » News » Pakistan all set to lose another PM in clash with judiciary

Pakistan all set to lose another PM in clash with judiciary

By Amir Mir
July 13, 2012 12:25 IST
Political observers see in the continuing executive and parliament versus judiciary clash in Pakistan all the necessary conditions for a derailment of the democratic dispensation once again, reports Amir Mir from Islamabad

The Zardari-led Pakistan Peoples' Party government in Islamabad is all set to lose yet another prime minister at the hands of the defiant superior judiciary. The supreme court of Pakistan appears to be in no mood to allow the government machinery fiddle over its directions to the country's chief executive for writing a letter to the Swiss authorities to reopen the alleged graft cases against President Asif Ali Zardari.

"Delays will not be tolerated come what may. The new prime minister will either have to write the letter or to face the music," the apex court told the attorney general of Pakistan on Thursday. Going in for the kill, the supreme court rejected a reply submitted by the attorney general of Pakistan on behalf of Prime Minister Raja Pervez Ashraf and ordered the latter to write the elusive letter to Swiss authorities for reopening the graft cases against President Asif Zardari and submit a response by July 25.

The apex court passed these orders despite the fact that Pakistan's parliament has already amended the constitution last week to protect top government leaders from contempt of court proceedings. The amendment was meant to counter the court's efforts to pressure the new premier to revive graft cases against President Zardari.

The new law was enacted in great haste as a possible shield against zealous judicial forays to save Prime Minister Ashraf from possible disqualification by the court for refusing to reopen corruption cases against Zardari in Switzerland. The senate passed the bill just a day before the supreme court resumed hearing of the case related to the graft charges against the president.

Earlier, a bench headed by Chief Justice Iftikhar Mohammad Chaudhry disqualified former premier Yusuf Raza Gilani on June 19, 2012, following his conviction for contempt in April for refusing to write the letter to the Swiss authorities against his president. The new law provides blanket immunity to top government functionaries, including the president and prime minister, for executive actions. The law can also be used to launch disciplinary proceedings against a judge without such a move coming under the ambit of contempt.

However, keeping in view the rebellious mood of the superior court judges and the rapidity at which they are pursuing the case against the newly elected prime minister, it seems that all efforts on the part of the government to save the new chief executive from the contempt of court guillotine may not work. The chief justice has already spoken his mind, saying a law that is in conflict with the provisions of the constitution will be struck down immediately. Eventually, it is the supreme court that will interpret article 204 of the constitution. Given that daggers have now been publicly drawn, the government is not likely to get any relief.

The apex court's order in the National Reconciliation Ordinance implementation case on Thursday has already triggered a fresh round of legal debate regarding the fate of the premier, and the role the controversial new contempt legislation will play in saving him from disqualification. Former chief justice Saeeduz Zaman Siddiqui and another retired supreme court judge, Justice Wajihuddin, are on the same page about new contempt of court law.

President Zaradri's close aide, barrister Chaudhry Aitzaz Ahsan, avoided commenting on the situation when contacted. However, when asked as to why the new premier had not yet hired a counsel, he replied no lawyer was needed at this stage since Ashraf had not been summoned to court yet. Dr Basit, Ahmad Riaz Sheikh's counsel in the NRO implementation case, said the court will not linger on the proceedings and might disqualify Ashraf on the next date if he disobeys its order like his predecessor.

Salman Akram Raja, Dr Mubashir Hassan's counsel in the NRO case, maintained that the court's fresh order clearly depicts the judiciary's inflexible mindset in this case. The letter will have to be written at all cost, therefore, he added. Regarding the new CoC ordinance, Raja said that according to the procedural part of the new ordinance, Ashraf will have the right to appeal against the first showcause notice.

On the other hand, however, the Zardari government's response to the insistence of the court that the letter be written top the Swiss authorities has now taken on political dimensions, not purely legal. Government circles are quite prepared for the eventuality that the apex court may strike down the contempt law just passed, which provided immunity from contempt to the president, prime minister, ministers and chief ministers, on the ground of being discriminatory.

They may see this as helpful in focusing public attention on the court's consistent attempts to show through its orders that it sees parliament as subject to the provisions of the constitution, with the supreme court the only forum to decide on interpretation of those provisions.

Political observers see in this continuing executive and parliament versus judiciary clash all the necessary conditions for a derailment of the democratic dispensation once again.

A leading English newspaper of the country, Daily Times, has commented on the current political situation of the country in these words: 'Certainly, going by our 65-year history, derailment of democratic dispensation is not a thought beyond the bounds of possibility. However, as each truncation of democracy has by amply demonstrated, such abortion of the democratic process has brought nothing but grief to the country in the past, and is unlikely to bring anything else but more grief in the future, should such an eventuality come to pass. The watchword should have been restraint on all sides and by all institutions of state, but that seems like a lost, forlorn plea under the obtaining circumstances.'
Amir Mir in Islamabad
Related News: Raja Pervez Ashraf, National Reconciliation Ordinance, supreme court, Pakistan Peoples, Asif Zardari
Print this article
Is Pakistan's chief justice on his way out? 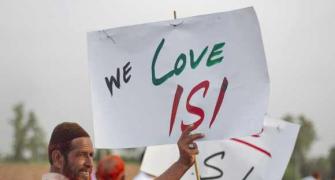