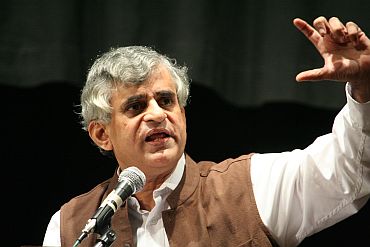 Media is business, journalism is not. With these stinging words, developmental journalist and Magsaysay Award winner for journalism P Sainath grabbed the attention of the 250 media students attending Mumbai's Sophia Polytechnic's annual lecture, 'Catalyst for Change', on Thursday. The topic was 'Paid News', on which there cannot be a more well-informed speaker than Sainath who has consistently highlighted the menace in his writings.

"Paid News is an industry that is run by the owners of the media. Media and journalists are different. Media is business, journalism is not," he clarified.

He talked about a Marathi newspaper group which held an editors meeting in Pune before the Maharashtra assembly elections. Their grouse was that a rival newspaper group had made more money than them in the Lok sabha elections.

They calculated that to win an MLA's seat one needs to spend Rs 3-5 crores. Maharastra had 288 assembly constituencies, with 145 to be won for a majority. This would need Rs 400-700 crores and they planned to get 30 per cent of that amount.

They planned to make Rs 250-300 crores but their main rival still made more money. Targets were set at that meeting.

Sainath said 'Paid News' is defined by the Press Council as 'news appearing in the media for cash or kind -- appearing as news and not as an advertisement'.

The amount involved in the Maharashtra assembly elections was estimated to be around Rs 500 crores but the actual amount was closer to Rs 1000 crores. Compared to the owners of these media empires, journalists who appear on the 'Radia tapes' were small time.

In paid news, Sainath said, you were cheating the voters by creating a positive image of the candidate, which may not be true. This undermined the democratic process, as poor candidates were ignored.

He said former Maharashtra chief minister Ashok Chavan had 300 full page articles on him during the elections. Chavan had even arranged an election meeting with Salman Khan for Rs 4300 for which the Bollywood superstar had flown in in a private aircraft.

The Election Commission imposed an expense ceiling of Rs 10 lakh on an assembly candidates and Rs 25 lakh on Parliament candidates. "In paid news you can spend much more, and the newspapers are not paying income tax on this," Sainath pointed out.

He lamented that though the Election Commission had reacted on 'paid news', the media had not.

He recalled that when he visited Nagpur during the elections, a minister had complained, "They are asking me for Rs 20 lakh to cover my campaign". Television channels were distributing rate cards without logos. A profile cost Rs 4 lakh and dawn to dusk coverage cost Rs 25 lakh, which would be aired as a half-hour special. A second special would cost Rs 15 lakh.

He said earlier, advertising would increase during elections but now it was going down. The money had shifted to paid news.

Thanks to this menace, thousand of candidates did not get any coverage. "Lokmat gave Ashok Chavan 156 pages."

"Journalists' meetings have discussed this but it was never reported there."

Elaborating on this, he said in the latest Bihar assembly elections, some 87 candidates got notices from the Election Commission about 'paid news' but nobody reported this.

So how does 'paid news' work? Sainath said that big political parties gave crores of rupees to PR agencies who contacted ad agencies who in turn contacted the newspapers. In Nagpur, he said, even independent candidates were offering Rs 20,000 to journalists and saying, 'Do paid news'.

He said 212 millionaires contested in Maharashtra of whom 186 won. Lokmat's owner himself became a minister in Ashok Chavan's cabinet.

His advice to the assembled students was, "As journalists you can speak to anyone. But it is important how you use the news".

When the Election Commission served a notice to the newspapers about the Ashok Chavan write-ups they defended him even though the same article appeared in three major papers under different bylines he said.

"Individual journalists can refuse bribes but they had no choice when the owners gave them readymade interviews and their names were used," Sainath informed his young audience.

He concluded with, "It is all about corporate power. Check the board members of the biggest media houses. They are all big corporate owners. We have commercialised education, healthcare and sports. Now media is being commercialised."

He told the assembled students, "We should be fighting for democratisation of the media. There is a mass media disconnect with mass reality." Small magazines gave true news, Sainath wound up.

In the Q&A session that followed, the first question was about online social media. Sainath said the Radia tapes were online for nine months but made a splash only when Outlook and Open magazines published it. "Twitter cannot do this and Facebook pages in my name have nothing to do with me. Print is still growing in India as literacy is growing. Internet penetration is still low."

The next question was, was it wrong when PR agencies gave 'paid news'? Sainath replied that PR agencies were not doing anything wrong. Media had created 'paid news', and they were corrupt, not the PR agencies.

A student wanted to know what was their choice as they were entering the industry. "Now there is more corporatisation. In those days Blitz published what the Times did not. There is still space for honest journalists," he assured the youngster.

The next question was about the invasion of privacy of industrialist Ratan Tata and journalist Barkha Dutt who figure in the leaked Radia tapes. Sainath's reply was, "Privacy issue is a serious one. But everything comes out -- WikiLeaks proves that. What is Niira Radia's telephone bill? Individual privacy should be respected. Institutional privacy cannot be assured. Radia's phone was tapped, not Ratan Tata's. Who is her telecom provider? The government is going to investigate who leaked the tapes but not the 2G spectrum scam!"

Another student wanted to know where to draw the line between a source and a journalist. Sainath said, "You don't have to do everything you are asked to do. They will respect your independence. Sources can give you good stories and also plant stories. You have to make your own judgement."

The last question was about media and justice. Sainath said the media had achieved success in the Jessica Lal, Priyadarshini Mattoo and Ruchika Girhotra cases but there was still a class and caste bias. "The media can investigate but you are not a court of law. In Delhi it was the middle and upper class that had the media fighting for them. They even have a programme, 'We, the people of South Delhi'. Rural India did not get this justice. In Mumbai it is difficult to see the difference between the fourth estate and real estate."

Sainath's parting shot to the students was, "You should fight some issues as a journalist and other issues as a citizen."

When Ashok Chavan was quizzed about paid news