The officer tells Archana Masih/Rediff.com about her history-making moment of being the first woman to lead an Inter Services Guard of Honour. 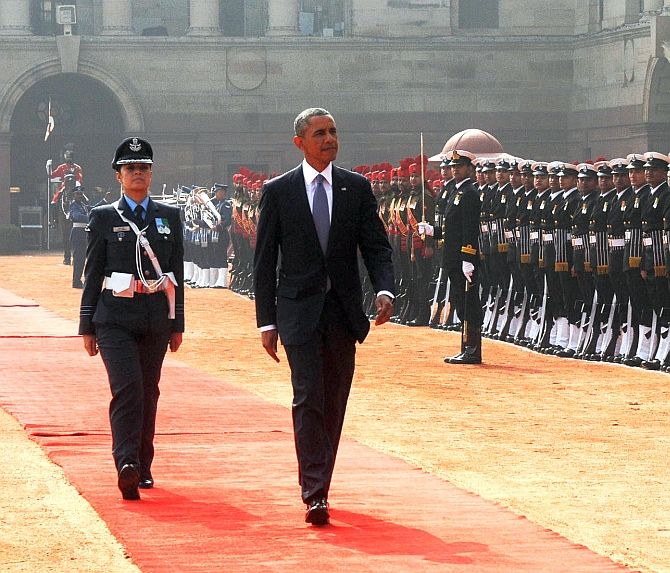 "It was a very happy and proud moment for me and the Indian Air Force to lead the inter services guard of honour today," Wing Commander Pooja Thakur tells Rediff.com on the telephone in between a string of television interviews, after leaving Rashtrapati Bhavan on Sunday afternoon.

It was a busy and overwhelming day for the wing commander, a native of Rajasthan, who comes from a defence background, and had not even had a chance to speak to her parents to ask them what they thought of her proud moment.

She had been informed five or six days ago that she was to lead the Inter-Services Guard of Honour for United States President Barack Obama and had reported at Rashtrapati Bhavan two hours before the American President arrived.

"No, I wasn't nervous," she says, "Parades and ceremonials are a part of our training and inculcated in us since the beginning of our career. It was very exciting."

With 13-and-a-half years of service experience, the officer is currently posted in the publicity cell of the Indian Air Force in New Delhi, and previously served in Chandigarh and Gorakhpur.

She wears the history-making moment of being the first woman to lead an Inter-Services Guard of Honour with polite grace.

"The message it sends is that we all are equal. In the Indian Air Force, men and women receive the same training. It is not a job, but a way of life," says the officer.

"I hope more and more women join the Air Force and the Indian Armed Forces."

Image: Wing Commander Pooja Thakur marches behind US President Barack Obama during the Inter-Services Guard of Honour at Rashtrapati Bhavan.