Despite being in the crosshairs of the police, politicians and vigilantes, Malini Subramaniam continues to report from Bastar, Chhattisgarh, a hotbed for Maoist insurgency.
For her work, often under life-threatening circumstances, she has won the International Press Freedom Award 2016.
P Rajendran meets Subramaniam at the awards night in New York City. 'There has never been a more dangerous time to be a journalist.'

Malini Subramaniam knows a little about this point, reiterated with variations by many of the speakers at the annual dinner organized by the Committee for the Protection of Journalists at the Waldorf Astoria in New York City on November 22.

Subramaniam, who faced persecution after reporting the law and order situation in Bastar, Chattisgarh, for Scroll.in, was one of the winners of the CPJ's International Press Freedom Award, given to journalists who do sterling work in bad, even life-threatening, conditions.

Subramaniam was forced to leave the area with her teenaged daughter this February, after vigilantes and the police allegedly encouraged her neighbours to attack her and forced her landlord to evict her.

She continues to report about events in Bastar, a hotbed for Maoist insurgency and where beleaguered government forces often overreach themselves, declaring Adivasis found in the forests that they consider their home as insurgents.

"The police file cases against the villagers," Subramaniam told Rediff.com in an interview prior to the event, adding that, though the security forces are meant to be the protectors, "civilians are made vulnerable by the government."

Yet, she even goes back to Bastar off and on -- at the risk of incarceration or worse -- to write about excesses happening there.

"I used to (also) write about Maoists killing Advasis," said Subramaniam, describing the case of a boy "brutally" killed by the Maoists.

Subramaniam says she came into the local government's crosshairs soon after she wrote news reports alleging that claims of surrendering Maoists in Chintalnar involved rounded-up locals with no connection with the radical movement.

She described being followed and questioned and being treated with the kind of hostility reserved for a foe.

In particular, she recalled frustrating an attempt by the police to rush into her house by telling them they would need a search warrant first.

As had happened in other cases, Subramaniam feared any access would give the police a chance to plant something incriminating in the house.

But after having people shout slogans outside her house, having stones thrown at her house and her car windows smashed, she knew that, in the absence of some sane intervention, the situation would escalate out of control. And then she had a child Samaa, 15, with her. So the pair left to join Subramaniam's husband.

As Scroll.in described it, Subramaniam was facing trouble from more than the ruling Bharatiya Janata Party in Chattisgarh. She knew two of the men shouting slogans from an earlier meeting -- one was from the BJP, the other from the Opposition Congress. The duo had apparently come together in bipartisan unity against the inconvenient journalist.

Samaa, who was also at the New York event to fete Subramniam, remembers hearing the men shouting at her mother, and exhorting the neighbours to join them against her mother.

Samaa said she felt no resentment toward her mother whose work put them in this dangerous situation.

"I was angry at them," she said. "They were childish. And I am a child (saying this)," she said with an incredulous laugh.

Subramaniam had to take Samaa back to Bastar secretly a few months later so that she could finish her exams. Despite the stress, Samaa did pretty well in the exam. 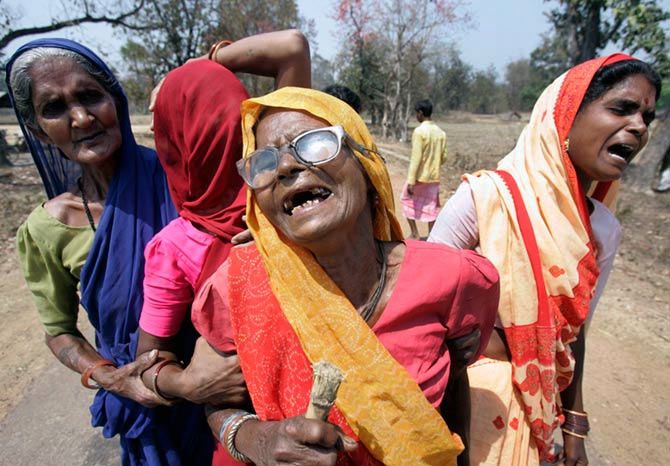 IMAGE: A grieving family in Chhattisgarh. Malini Subramaniam says she came into the local government's crosshairs soon after she wrote reports alleging that claims of surrendering Maoists in Chintalnar involved rounded-up locals with no connection with the radical movement. Photograph: Parth Sanyal/Reuters

Subramaniam was not drawn to knife-edge journalism because of the opportunity it would afford her to hobnob with film stars, clink glasses with the glitterati, or engage in the loud rabble-rousing that passed for analysis on television.

It was as a social worker for the International Committee of the Red Cross that Subramaniam first went to Bastar. Over time, she saw the atrocities visited on the people and first thought someone ought to write about it.

Then she wondered, why not herself? She stayed on even after the ICRC closed shop in Bastar and sought that she move to New Delhi. Subramaniam had found her calling, even though it was at a freelancer's salary.

The CPJ dinner and fundraiser was the regulation glitzy affair, with over 700 guests from the media and corporate world attending. New Yorker Editor David Remnick, who was standing in for Gwen Ifill of PBS, who died recently, spoke of how the figures spoke for the dangers journalists now faced.

The 240 of them in jail around the world was the highest number since the CPJ was set up, he said, and then went on to name three journalists who had been killed in the line of duty this year: Belarus state television's Pavel Sheremet, National Public Radio's Zabhihullah Tanama and David Gilkey.

"Being a journalist is not a protection," he said, arguing that, in fact, the label made them targets.

Jeff Zucker, president of CNN Worldwide, raised the same point when he said: "There has never been a more dangerous time to be a journalist."

"More journalists are doing conflict journalism than ever," Zucker added.

Subramaniam was the first winner announced. And when she came up to speak, she spoke about how Adivasis were caught in the middle of the fight between Maoists and government forces.

"The state government (of Chattisgarh) used appalling methods to silence all voices," she said. "The Government of India watched, doing nothing."

Among others, she thanked her editors at Scroll.in for their unstinting support, her colleague Kamal Shukla who accompanied her on many of the stories, and her family, including Samaa; Ashim, her supportive husband; and her other daughter, Sakhi.

The others who won awards were Oscar Martinez, the editor of El Salvador's El Faro, an online publication, that wrote pieces on organised crime; Can Dündar, a Turkish journalist whose government accused him of exposing State secrets and helping terrorists when his paper, Cumhuriyet, exposed -- with photographic evidence -- that the government was lying when it said it was not supplying arms to Syrian rebel groups; Mahmoud Abou Zeid (Shawkan), an Egyptian photojournalist who has been in jail since 2013 while covering the dispersal of a protest in Raba'a Al-Adawiya Square in Cairo.

Christiane Amanpour, CNN's chief international correspondent and a senior adviser to CPJ, won the Burton Benjamin Memorial Award for 'her extraordinary and sustained achievement in the cause of press freedom.'

In her acceptance speech, she argued for journalism that would not brook intimidation or be caught in the trap of false equivalencies.

Amanpour said that journalists around the world sought examples in their American counterparts and ought not be let down. She argued against the proliferation of fake news and the role Facebook played in promoting it.

"As a profession, let's fight for what is right."

"Let's fight for our values."

"Bad things do happen when good people do nothing."

Speaking to Rediff.com about Subramaniam, Kamal Shukla spoke sombrely: "In my life, I have never seen a woman journalist braver than her."

He described how she came into the jungles with him despite the danger, and added, "I learn from her."

Shukla, a veteran reporter of 28 years who has seen other journalists reduced to government contractors, is himself restricted from free movement by the local police.

"It is very hard," Shukla said, "to be an independent worker."