What goes behind the scenes for an American President's visit?
Archana Masih/Rediff.com finds out. Among the heads of State who visit India, the US President is special.

"When it comes to the American or Chinese president, there are some special gestures like the prime minister receiving them personally," says Ambassador B S Prakash, who served as India's consul general in San Francisco.

"The prime minister did it with President Xi Jinping and will certainly do so with President Trump, even though that is not part of protocol," Ambassador Prakash adds.

The gesture indicates the strengthening and consolidation of India-US relations, especially in the first two decades of the 21st century.

Interestingly, the guest at the first State dinner hosted by President Obama during his first term in the White House was Dr Singh.

A senior 'minister in waiting' is assigned the duty of receiving the US president and accompanying him throughout his trip till his return. Union Minister Piyush Goyal served as Barack Obama's minister-in-waiting in 2015 and Congress minister Salman Khurshid in 2010. It's all in the protocol

The ministry of external affairs has a separate department for protocol.

The chief protocol officer will be among the first Indian Foreign Service officers that President Trump will encounter on disembarking and the last before stepping back into Air Force One.

'Protocol, like good wine, sets the mood and creates the right atmospherics for the diplomatic and political leadership to move ahead with serious diplomatic business at hand,' wrote Manish Chand in India Writes, a magazine on international affairs, explaining protocol as the frontline of diplomacy.

All VIP visits have a set pattern and standard drill. The protocol is clearly defined and the preparation, including the motorcade, security, stay etc, works as a well-oiled machine.

A State visit usually includes a banquet hosted by the President of India at Rashtrapati Bhavan, a wreath laying ceremony at Mahatma Gandhi's samadhi at Rajghat, official talks at Hyderabad House followed by a press conference and sometimes a tea/lunch hosted by the prime minister. The US President's travel party

A team of US officials and Secret Service agents arrive in advance to conduct a comprehensive recce of all the locations that the American president is scheduled to visit.

Every place the president is likely to go is checked thoroughly, meticulous notes are made and discussed with the security detail.

The American president's car, nicknamed 'The Beast', will be flown in a US air force plane before the Trumps set foot on Indian soil.

Along with the official delegation, a large accompanying team travels with the president on Air Force One. Secretaries from various departments, media advisers and many senior officials constitute the entourage.

The White House photographer, who documents the presidency, is a crucial part of every State visit.

The First Lady will have her own staff.

Advance teams also hold consultations about the stay arrangements for the president. In New Delhi, the Maurya and the two Taj hotels are usually homed in for fulfilling certain VIP security criteria.

Like Bush and Obama -- predecessors he has often expressed his contempt for -- Trump will also stay in the Maurya's Presidential suite.

A hotel's previous experience and track record of hosting VIP dignitaries is taken into account. American officials discuss the logistical and security bandobast aspects with their Indian counterparts. IMAGE: Then US president George W Bush at the State dinner as then prime minister Dr Manmohan Singh, then President A P J Abdul Kalam and then US First Lady Laura Bush look on at Rashtrapati Bhavan, March 2, 2006. Photograph: B Mathur/Reuters

The invitees at THE banquet

The first time Rashtrapati Bhavan hosted a State dinner in the Mughal Gardens instead of the banquet hall was for President George W Bush and his wife Laura in March 2006.

Visiting dignitaries are always very impressed by the President's Bodyguard, the Indian Army's oldest cavalry regiment that is located inside Rashtrapati Bhavan. The regiment performs ceremonial duties for the President.

The guest list for the State banquet depends on the number of seats that can be accommodated at the long banquet table. Normally, the broad understanding is that 30 per cent of the dinner guests are American and the rest Indian.

Modi will decide on the Cabinet ministers who will attend the banquet. Important leaders from the Opposition could find a seat at the table. For instance, members of Parliament's external affairs consultative committee could be invited or those with a track record of dealing with the US.

Senior Indian officials, think-tank mavens, senior strategic analysts and artistes are the pool from which invitees are selected.

This list is prepared and scrutinised by the Americas department at the ministry of external affairs. It is sent for approval to Rashtrapati Bhavan.

General Dwight David 'Ike' Eisenhower, the first American president to visit India in 1959, stayed at Rashtrapati Bhavan as did Richard Milhous Nixon and James 'Jimmy' Earl Carter during their visits in 1969 and 1978.

But all three American presidents to visit India in the 21st century -- William Jefferson Clinton (March 2000), George Walker Bush (March 2006) and Barack Hussain Obama (November 2010 and January 2015) have shunned the formal stateliness of the presidential mansion and stayed at the Maurya. The menu is decided by the chief chef at Rashtrapati Bhavan. Pranab Mukherjee, a former external affairs minister and well-versed in diplomatic parlays, was President during Obama's 2015 visit.

The banquet was held in the newly furbished ceremonial hall with a delectable vegetarian and non-vegetarian menu.

Previously, a State dinner included a cultural performance. The Shillong Chamber Choir performed for the Obamas at Rashtrapati Bhavan in 2010.

In March 2006, President Bush raced across to congratulate the Indian Navy's band for the lovely music it provided during the banquet.

A famous story about a State dinner comes from Indira Gandhi's prime ministership. On discovering that a visiting French president was going to be served some boring British food, she was horrified!

Mrs Gandhi, of course, had the menu changed. 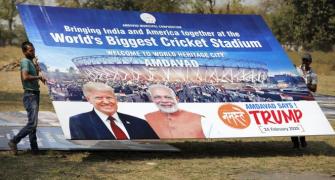 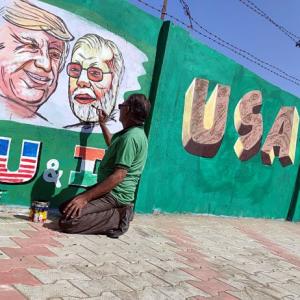