Monica Sindhwani, whose family has lived in Myanmar for generations, left Rangoon for India at 20.
Married to a retired Indian Army officer, she relives her memories of the pagodas, the greenery and the home she left nearly 40 years ago, with Rediff.com's Archana Masih, on the eve of the release of Vishal Bhardwaj's epic film, which is set in Rangoon of the 1940s. 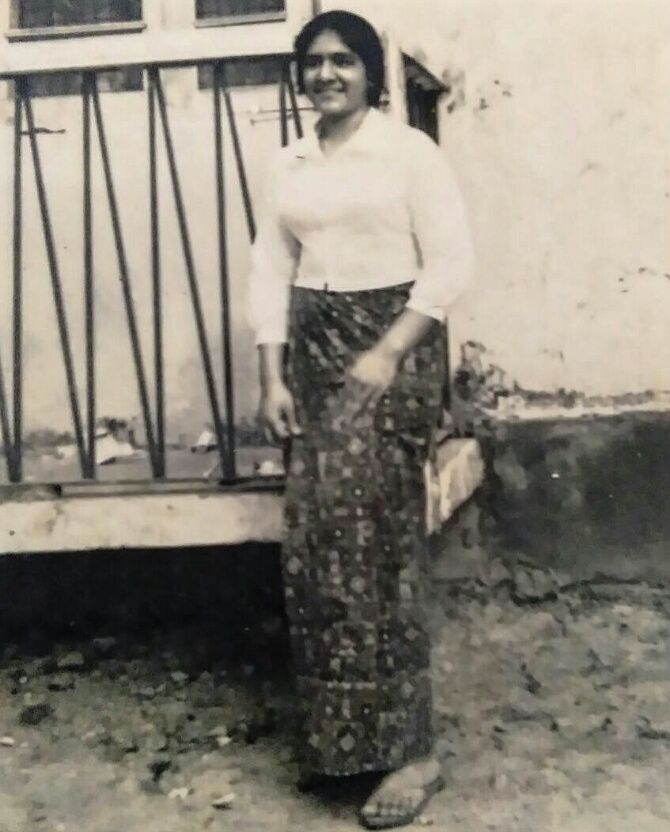 I lived the first 20 years of my life in Burma and have such pleasant memories.

Burma was a cosmopolitan place and the Burmese were very nice people.

When you have good surroundings and good people, life itself becomes good.

This was how it was for us in Burma.

There were very good schools and I went to a convent. I had Telugu, Chinese, Bengali, Muslim and Burmese friends.

Sometimes we had better relations with Burmese friends than our Indian friends. Our neighbours were both Indian and Burmese.

I spoke and wrote Burmese. I still speak it, but read only a little. 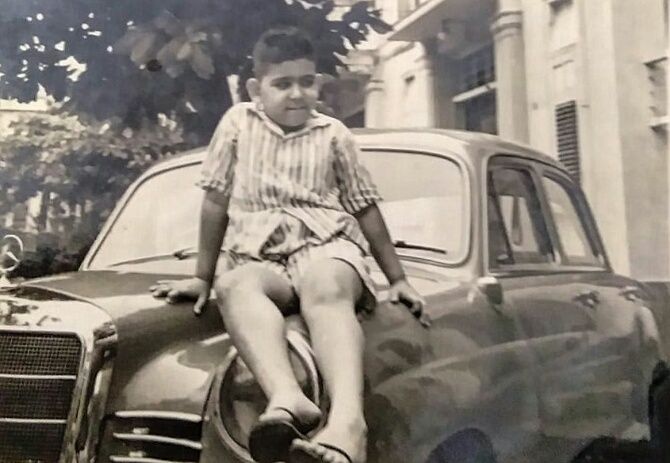 IMAGE: Her brother as a boy outside their home in Rangoon. Her father, Dr Dhir, lived in the same house till 1997. Photograph: Kind courtesy Monica Sindhwani

I was born in Moulmein. My father was a jail doctor there. Later we moved to Rangoon.

My father had studied medicine in India and returned to Burma to practice. He was also conscripted as an army doctor during the war, but he mostly worked as a private practitioner in Rangoon.

My grandfather and his father lived in Burma even before British India. My family is originally from Nakodar, Punjab.

My parents crossed over to Imphal on foot during the Japanese invasion. They stayed in Amritsar for a couple of years and returned to Burma after the war. The junta wanted the students to only study in Burmese. The convents were shut.

The military rulers would have been happy if you married Burmese, so the Indians felt they should return to India for their children's future.

My cousins didn't leave and stayed on. They married Indians and continue living there.

In my case, my brother first came to India to study engineering. Then I came for further studies after my BA, but my grandparents found a good match and got me married.

My family did not face any discrimination or problems in Burma. My father moved to India in 1997. He didn't want to come, but because he was all alone after my mother's passing and his three children were in India, we wanted him to come to us. We had to force him to come here. 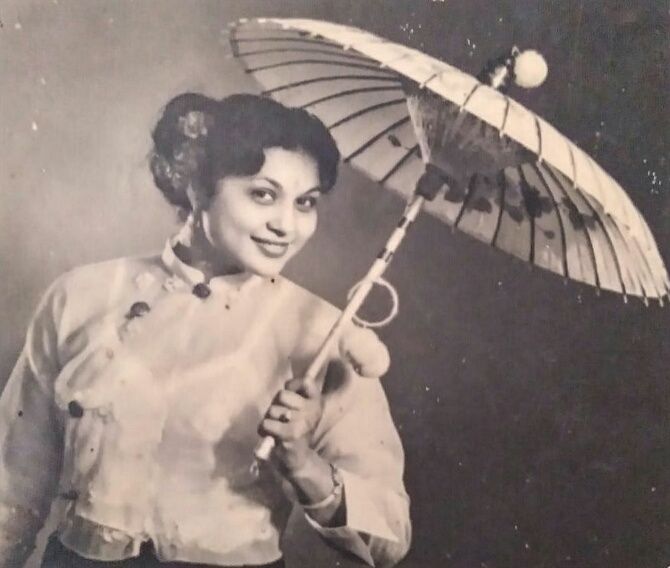 Contrary to what is said, there are more than 2 per cent Indians in Burma.

As members of the students society, I remember we used to have functions on 26th January and 15th August on a grand scale. More than I think I have ever done in India.

During Durga Puja, we would spend most of the time in the pandal.

We went to the gurdwara every Sunday and do seva.

My cousin still goes to the gurdwara and temple every Sunday. The marriages take place over 3 or 4 days like they do in India. 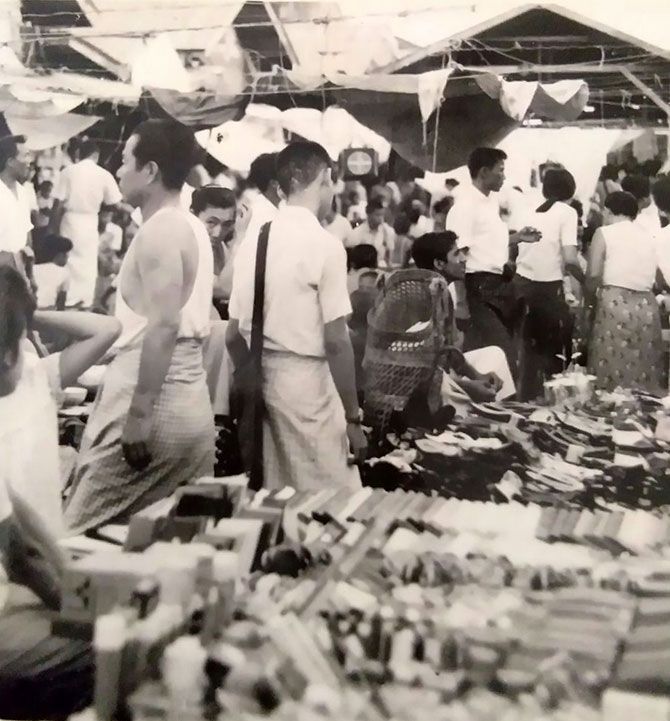 My relatives haven't faced any hostility or indifference from the locals. They have a business in auto parts.

My other family, where my grandfather was born, had a flour mill and ran steamers. The flour mill is still there.

My cousins visit India. Many come for medical treatment and surgeries.

Like us, the Burmese are culturally very rich. The Burmese people are such that even if they have little food and have a guest, they will feed the guest.

At that time, the houses used to be mostly wooden. We stayed in a flat with a wooden floor. It has been demolished and an apartment has come up. My father lived in that house till 1997.

We had such lovely neighbours. I am still in touch with friends in Burma. 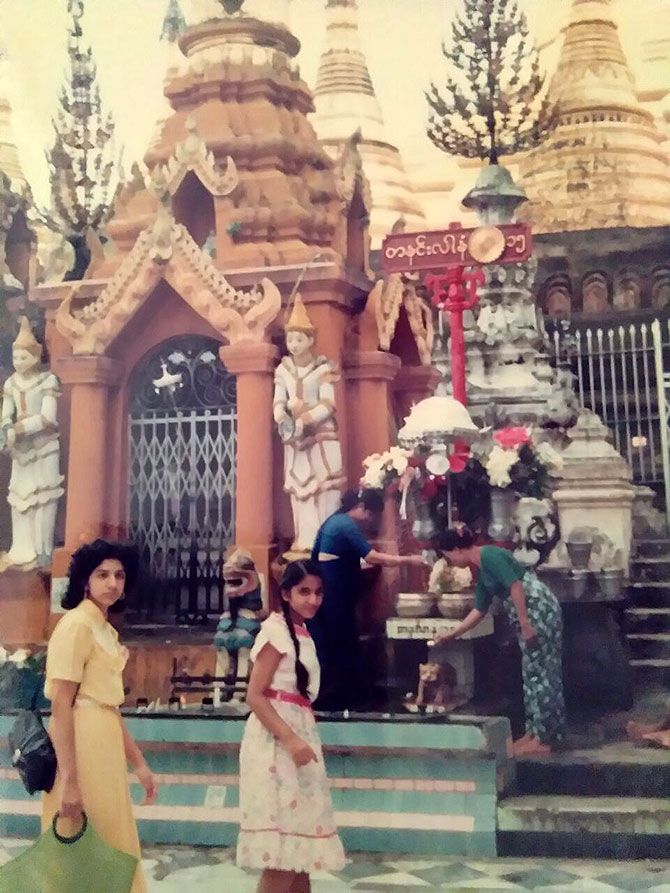 IMAGE: The family's last trip to Burma was in 1987 during the military rule. Photograph: Kind courtesy Monica Sindhwani

My husband has only been to Burma once. Since he was an Indian Army officer he could not leave Rangoon and travel elsewhere in the country because Burma was under military rule.

The government has changed and things are coming back to normal like the good olden days before military rule.

People are coming out of their fear of military rule, but things are extremely expensive.

The cost of living is very high because the military couldn't handle the economy.

I last went to Burma in 1987. We are planning a trip. Visas are no longer a problem and I can stay for as long as I want.

During the military rule, they used to give a tourist visa for 7 days only. Burmese lacquerware and pictures are all over my home in Dehradun. I love cooking Burmese food.

When I visit my children, they also want me to cook Burmese food. Look, how popular Khao Suey is in India!

I make Lethok -- a nourishing salad which has 26 ingredients, mostly raw. It's called Lethok because you mix it with your hands.

Coconut rice and chicken curry and a tasty sweet dish made with suji, called Sanwin Makin -- all these are favourites.

Anything Burmese is a favourite! 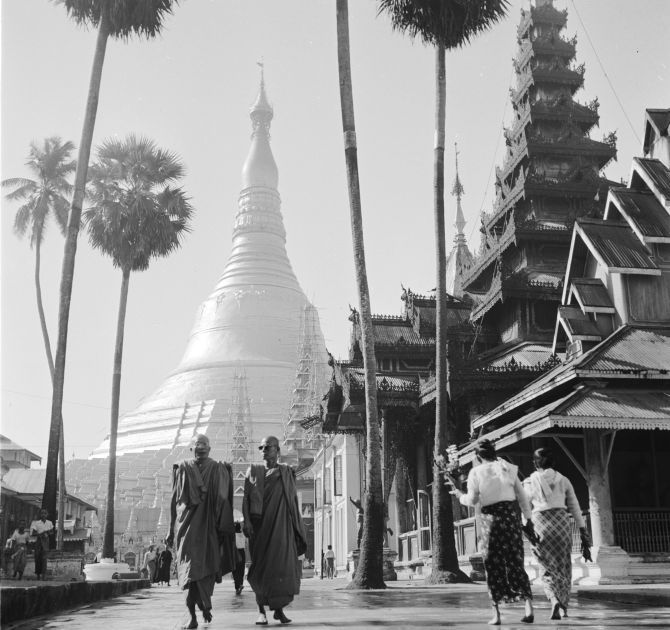 IMAGE: The Shwedagon pagoda in Rangoon with two monks in the foreground. It is Burma's foremost Buddhist temple.
The pagoda near Mumbai is a smaller version of it.
Photograph: Three Lions/Getty Images

The three things I like best about Burma are the pagodas, greenery, the hospitality and genuineness of the people.

You can't say there is a barren place in Rangoon. Our house was on an avenue with lots of trees. I believe they have maintained it.

Of course, Burma can't be spoken of without Aung San Suu Kyi. What an amazing lady! She has done so much for Burma and is doing a lot for her country.

Like her, the Burmese women wear longyis. The gents wear the paso. They still wear their local dress.

My cousins in Burma also wear it. Some wear saris, some wear longyis.

I used to wear it too and still wear it at home.

Vipassana originated from Burma. S N Goenkaji started it in Burma. We were family friends. Goenkaji's son Girdhari was my class fellow and he passed away recently.

There is a big vipassana centre in Igatpuri. They have made a very big pagoda in Bhayandar near Mumbai.

We had been invited for the inauguration. Goenkaji had come for it along with many people from Burma. It is a small version of the 2,500-year-old Shwedagon pagoda which is very famous in Burma.

There are many Burmese Indians in Maharashtra, Gujarat, Calcutta, Punjab, and Delhi.

I will, of course, be watching Rangoon, but I don't think they have shot it in Rangoon.

DON'T MISS the Rangoon features in the RELATED LINKS below...