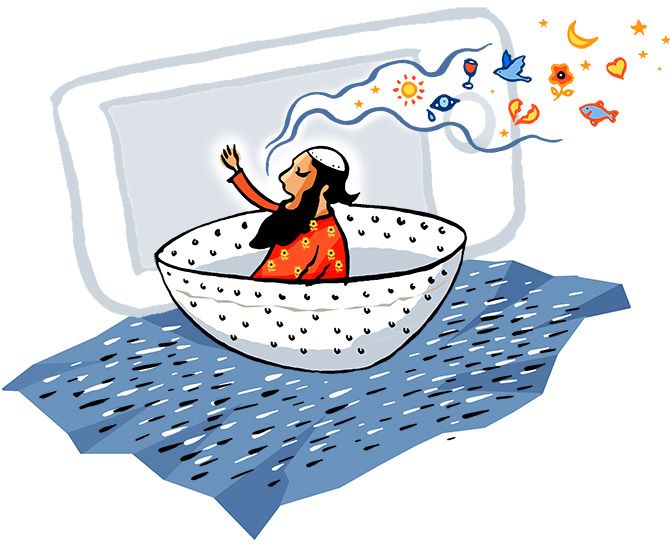 The lawns of the Indira Gandhi National Centre for Arts in Delhi were choc-a-bloc over three days last February.

There were men and women, young and old, in silks and pashminas. There were students in ripped jeans and loafers. And, there were children.

They were here for Jashn-e-Rekhta that had drawn in poets, artistes, litterateurs and singers from India and Pakistan to celebrate the lyrical beauty of Urdu.

Jashn-e-Rekhta, the third edition of which was held from February 17-19, is the result of one man’s passion for what he describes as the language of love.

Its seed was unknowingly planted five years ago by Sanjiv Saraf, who, after building a global business venture, Polyplex, set out on a quest to learn Urdu so that he could read its rich poetry, ashar and ghazals, in their original script.

“An ustad would come home to teach me,” says Saraf, 58, soft spoken and almost self-effacing.

During this process, he also started searching for material online and found an appalling paucity of good-quality Urdu poetry and text. There were errors, too: ghazals wrongly attributed to a poet or couplets incorrectly reproduced and translated.

“I knew there would be thousands like me who are attracted to Urdu poetry but cannot read the language and, therefore, don’t have access to a large part of our heritage,” says the IIT-Kharagpur alumnus.

‘Three years ago, we felt that the website was pulling in people who are interested in Urdu, but we weren’t taking Urdu to the people. We felt we should showcase Urdu in its multifaceted splendour, because this is the only Indian language that lends itself to so many different art forms.’

By now, Polyplex, which he had started in 1988 after leaving the family business of mining and metallurgy, was a well-established company that had branched out to Thailand, Turkey and North America. He handed its affairs to his team of professionals and, on January 11, 2013, started a website that would be an authentic archive of Urdu literature.

He called it Rekhta, which literally means both ‘scattered’ and ‘mixed’ -- a language that is a creative blend of various dialects. The Urdu that we know today, he explains, has, in the past, been known by several names: Hindavi, Hindi, Dehlavi, Gujari, Deccani and Rekhta.

In four years, www.rekhta.org, which is part of the Rekhta Foundation, has become the largest online repository for Urdu poetry and literature in the world.

The content in is Urdu, Devanagari and Roman scripts and comes with a built-in dictionary. Click on any word and you have its meaning right there.

It started with a team of five-odd people.

Today, about 60 people work on the project full-time. Among them are students and research scholars.

The Rekhta office in Noida resides in the same building where Polyplex is located. Only now, instead of Polyplex, Saraf spends 14 hours a day at Rekhta.

“I live here,” he says, waving at the editorial section.

It’s an airy floor with large windows and lots of natural light.

A spacious hall with minimal furniture and large posters of Jashn-e-Rekhta leads into the editorial section where people are engrossed in work, sifting, keying in or correcting content for the website or linking videos from YouTube with ghazals.

In another room, another mammoth task is on: digitising books written in Urdu.

Saraf gets messages from people from Pakistan, ‘who are surprised that something like this is happening sarhad paar (across the border) and is being spearheaded by a Hindu,’ he says laughing.

The pages of some have gone yellow with age. Some are moth-eaten and in an irrevocable state of decay.

Among those digitised is the 42nd special edition copy of Deewan-e-Meer. Only 100 such copies, which had Mulk Raj Anand and Sardar Jafri as editors, exist.

“We would source books for our website, but several old ones would not be available,” says Saraf. They would be lying in people’s personal libraries scattered around the country or being sold in old Urdu book bazaars -- thus came the idea of digitising whatever book they could lay their hands on.

A scanning machine was imported from the US, “but we soon realised that one machine was grossly inadequate.”

Now there are 17 machines deployed around the country: in government and private libraries like Delhi’s JamiaHamdardUniversity, GhalibAcademy, and in Hyderabad, Mumbai, Lucknow, Allahabad and Rampur. Every Sunday, someone from Rekhta heads out to the Urdu Bazaar in Delhi and returns with a few cartons of books that are then digitised.

It is a painstaking process that has resulted in a humungous online collection of Urdu writers, ancient and contemporary. Take, for example, Saadat Hasan Manto. Under his name are 58 e-books, 106 videos, 271 short stories and 59 dramas.

The office also has a poetry recording and performance studio.

It is not surprising that Saraf’s website now draws in a million and a quarter visitors every month from around the world. “Rekhta has taken a form of its own,” says Saraf, who has the ghazals and couplets on his fingertips.

Jashn-e-Rekhta, in a way, emerged from Rekhta, the website.

“Three years ago, we felt that the website was pulling in people who are interested in Urdu, but we weren’t taking Urdu to the people,” says Saraf. “We felt we should showcase Urdu in its multifaceted splendour, because this is the only Indian language that lends itself to so many different art forms.”

This edition of Jashn-e-Rekhta had, besides panel discussions, musical performances, qawwali, mushaira, dastangoi (story-telling), calligraphy, an Urdu bazaar, film screenings -- “Remember, Urdu was once the language of our movies?” -- and a food festival inspired by the language.

Film maker Imtiaz Ali, who attended Jashn-e-Rekhta last year, describes Saraf as “a very practical person, who has a certain visionary quality in the way he is going about the festival”. He adds: “There is a significant drift in the festival to show that the language does not belong to a particular religion.”

This is precisely the thought Saraf pushes. He gets messages from people from Pakistan, “who are surprised that something like this is happening sarhad paar (across the border) and is being spearheaded by a Hindu,” he says laughing.

‘I knew there would be thousands like me who are attracted to Urdu poetry but cannot read the language and, therefore, don’t have access to a large part of our heritage.

Prithvi Haldea of Prime Database, a friend of 30 years and another Urdu enthusiast, says it’s difficult to think of Rekhta without Saraf.

Haldea, 66, also handed over the charge of his company to his son to start the Ibaadat Foundation that aims to promote Urdu poets and poetry by organising events around a particular poet. Saraf is one of the Ibaadat trustees.

“We have intense discussions, even debates, on which poet or lyricist to showcase and what songs to present,” says Haldea.

No doubt events such as these require funds, as does running the Rekhta website.

Jashn-e-Rekhta is not a sponsored event, a fact that Ali says appeals to him immensely. “It is unbranded, so you don’t have to publicise or tilt in favour of the brand sponsoring it,” he says.

“So far,” says Saraf, “I have been going with a begging bowl to friends, relatives and friends of friends to chip in for it. The rest I pay from my pocket.”

Rekhta, the website, too, has been running on personal funds.

“Rekhta is a substantial clean break from my business past,” he says. “This will be my true legacy.” 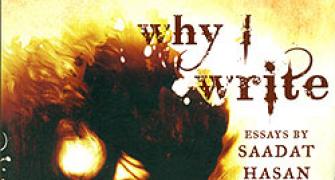 'Manto's predictions of Pakistan are shockingly accurate'
These verses are born of anguish: Ali Sardar Jafri 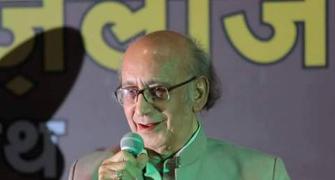 An encounter with Ahmed Faraz