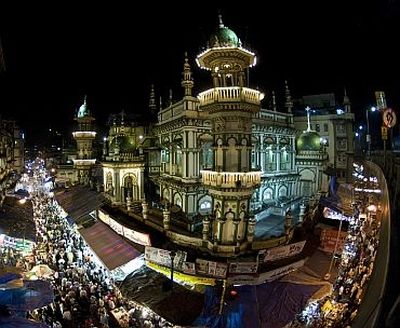 Bhendi Bazaar faces a fairytale future as the Dawoodi Bohras initiate a Rs 3,000-crore project to change it from a squalid marketplace to a swanky neighbourhood, says Ranjita Ganesan

It takes a keen eye, steady feet and strong stomach to find one's way to the first-floor house of 45-year-old Farida Shethwala and her family in Ghari Chawl, one of the several decrepit localities in Bhendi Bazaar, South Mumbai.

It's Friday and hawkers of the Jumma market yell themselves hoarse to draw shoppers. Two-wheelers speed recklessly in the narrow space between parked vehicles, their wheels plunging into pools of grey-green slush.

"Mind your wallet," warns someone.

A wobbly staircase leads to the 250-square-feet Shethwala home. On a wall stained by heavy seepage hangs a photograph of Syedna Mohammed Burhanuddin, the spiritual and temporal head of the Dawoodi Bohra community, smiling gently into the distance. There are billowy curtains on the window and bare mattresses on the floor.

These, says Shethwala, hide cracked tiles. Still, there is excitement in the household. That's because early next year, the Shethwalas will vacate the flat and move to transit camps at Anjirwadi or Ghodapdeo within Mazgaon, and after a few years, they hope to return to their new, and modern, flat in Bhendi Bazaar without paying a paisa for it.

"We are sure the mohalla will be a thousand times nicer when we come back," Shethwala says.

The Shethwalas are amongst the intended beneficiaries of a not-for-profit project launched by the Saifee Burhani Upliftment Trust to redevelop the 16.5 acres of Bhendi Bazaar. The 250 buildings of the area which host 3,200 homes and 1,250 businesses and where 20,000 people live and work will give way to 17 towers with water-recycling and sewage-treatment plants. Homes will have attached bathrooms.

There will be landscaped open spaces; a 15-metre-wide road will run through the locality. The places of worship, such as the Saifee and Handiwala mosques, will remain untouched. So far, 1,200 families have signed up to relocate.

The one-million-strong Bohras are industrious and generally well-to-do. Most are traders settled in western India or in the United States, United Kingdom, Africa and West Asia. The urbane community generates a Gross Domestic Product of $4 billion and enjoys 100 per cent literacy, according to reports.

Women wear colourful ridas and men wear skullcaps woven in white and gold. The community is close-knit, bound by unflinching allegiance to the Syedna. It was, therefore, a matter of common concern that Bhendi Bazaar, also known as Bohri Mohalla, offered less-than-sanitary living conditions to community members who account for 70 per cent of the area's population. Many families live in spaces smaller than 300 square feet.

The place is in desperate need of renewal. Mounds of trash sit in the scanty gaps between structures. Walking on the quaint, narrow roads is a nightmare for pedestrians. Children are not sent out to play and the elderly, like Shethwala's mother, Fiza, do not venture out except for prayers. Cab drivers in South Mumbai scowl at those who want to be dropped inside the lanes.

"People," says Amin Patel, the local legislator who belongs to the Congress, "have started associating the name Bhendi Bazaar with a ghetto." It was not always so.

The Bohras came to Mumbai from Gujarat during the 18th century. They traded in hardware and lived near Mohammed Ali Road. After the Great Fire of 1803, the British had organised the locality, known as Bhendi Bazaar, into neat grids and blocks which are less perceptible today because of encroachment and neglect.

The idea behind the project is to "create an environment that leads to growth and open-mindedness."

The project's official descriptor is upliftment, not redevelopment, renewal or repair. The cost is Rs 3,000 crore.

The plan is to resettle the inhabitants in 80 per cent of the land and keep the remaining area for saleable flats. This money will fund the project. Any shortfall will be met by the trust. Tenders have been invited to select a builder for the civil work.

In-principle approval was given to the master plan by the high-powered committee of the state government. However, bureaucratic procedures have delayed work.

"Approvals are a slow process. We are trying to overcome all these hurdles," says the trust's secretary, Shaikh Abdeali Bhanpurawala. "It is definitely very difficult." There is a demand to relax the 100 per cent norm to 80 per cent, and to throw in a premium for those who are still holding out.

Currently, the trust is focused on developing sub-clusters one and three. So far, 17 dilapidated buildings have been demolished and 10 buildings are under construction. Around Null Bazaar, buildings are shrouded in tarpaulin and scaffolding. Signages caution people against falling debris as razing ensues from the top. The bottoms of the structure with shops, however, have been left intact since commercial tenants have not consented uniformly.

This is where the problem lies. The bazaar is full of bustling lanes dedicated to selling hardware, foam, leather, clothing, antiques and snacks at wholesale rates. Shopkeepers insist sales have been sliding of late on account of almost zero parking and the lack of ATMs.

While the trust insists footfalls will increase once the project is completed, tenants fear an absence from the market for a few years will only impact business further. Others, who are on board with the plan, demand more clarity from the developers.

The shelves of 115-year-old Sarvajanik Stores, built by grain merchant Mustafa Danawala's grandfather, have been cleared to be packed off to the Mufaddal shopping arcade, the commercial transit half a kilometre away from Bhendi Bazaar.

"But there are hurdles," says Danawala. "I have not been told exactly where my shop will be after redevelopment. I need it on the ground floor because we have to unload handcarts." Moayyad Mithaiwala, third-generation owner of 50-year-old Tawakkal Sweets, expresses similar predicaments.

Every year, during Ramzan, his ground-floor shop on Khara Tank Road transforms to include a small sit-out area where customers dig into malpua phirni. "They cannot accommodate all shops on the bottom level," he worries.

Although business requires shopkeepers of the popular antique market, Chor Bazaar, to travel for replenishing stocks, many choose to stick to their seats out of fear that their establishments will be demolished or orders to vacate will suddenly be issued.

"In Mumbai, nothing is built on time. We cannot stay away from here for long because business khatam ho jayega (will be finished)," says Aziz Mansoori, who runs A-1 Corner, a well-known poster shop. While the trust expects to fully complete the project in about 10 years, some locals reckon the wait could stretch to 15 years. There are other worries too.

One shopkeeper points to the display of bric-a-brac spilling onto the street. "Can we do this in a posh shop?"

A few worry that the redevelopment is an attempt to alienate non-Bohras. This sentiment was echoed by Aijaz Ahmed Kashmiri, Imam of Handiwala Masjid, in an interview with Time Out Mumbai: "The plan is only for the Bohra community. They want Sunni Muslims to leave this place."

In response, the trust says the benefits will extend to all residents, irrespective of the community they belong to. To retain the flavour of roadside shops, it plans to develop high-street shopping centres facing the street. To those who do not want to shift to the commercial transit, the trust is offering a subsidy to rent new shops, say locals.

Monetary incentives might work in some cases but the trust feels more commercial tenants will come around when they see constructions taking shape. "It is human nature [that] whenever there is a change in life, there is concern," says the trust's CEO, Abbas Master. "What we want to do is make sure the time that people are kept away and the disruptions are minimum."

For that, it hopes the project will be classified as one for public good and given single-window clearances.

Bhendi Bazaar is a project being watched keenly by urban planners all over. "It looks at changing not only the condition of the buildings but the entire infrastructure of the area. If (Bhendi Bazaar) succeeds, others will be encouraged to take up similar projects," says Subhankar Mitra, head of strategic consulting (West), Jones Lang LaSalle India.

Conservation architect Vikas Dilawari argues such projects will work for slums or areas in Kurla with no registered history but could erase the character of markets such as Chor Bazaar.

"It is like advocating a new set of dentures that will be shiny and look good to a patient, when just a root canal will do," he says, recommending repairs with minimum impact to history as in the case of Lal Chimney Compound in Central Mumbai recently.

Many worry the relocation to transit camps is too disruptive. The one at Anjirwadi, built from scratch by the trust, is only 3 kilometres away from Bhendi Bazaar but in essence seems a totally different world. There are security guards at the entrance and enough room to drive around comfortably. Dozens of cars are parked around a small playground where children have gathered to play cricket late in the afternoon.

The soaring, cream-coloured buildings can house 750 families. The lobby houses community areas, where groups of men share biryani from a large plate. A prayer room is nearby. Elevators drop off people on long corridors, speckled with flats of 250 square feet. These are furnished with a kitchen, an attached bathroom, cupboards, light fittings and even a washing machine.

Most are satisfied with the arrangements. The rare complaint is that the taxi stand is about half a kilometre away, which means the elderly have to walk the distance when they set out for the mosque.

"I've forgotten the mohalla," says Mustafa Chitalwala who moved with his family to Anjirwadi 16 months ago. The stable owner has since started a small dairy business too.

Adjusting to the quiet in the transit home was difficult initially because their ears were used to constant honking. Children are enjoying luxuries such as a playground but Chitalwala's parents hark back to past days. He says, "My dad is still attached to the old building."

Back at Bhendi Bazaar, Mithaiwala, the 25-year-old shopkeeper, is enjoying the mohalla life, the familiar laughs of neighbourhood aunties exchanging gossip from across balconies and the steady diet of delectable street food while it lasts. "When it is gone, who knows, maybe people will like the new Bhendi Bazaar better than this one."