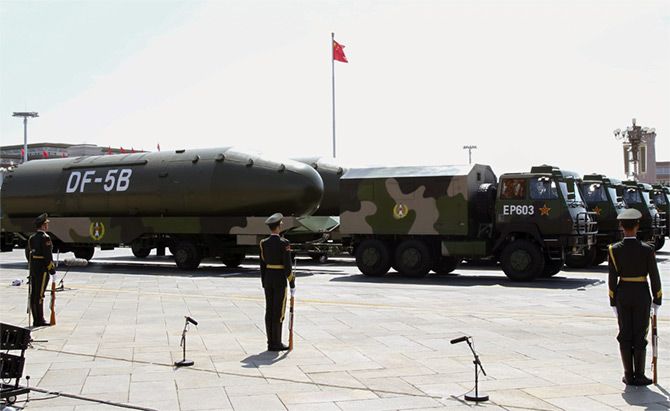 IMAGE: The Dongfang 5B missile system is long range (about 12,000 km) and has multiple independent re-entry capabilities, meaning the missile would hardly be intercepted by the United States or other nations. China's military missiles were presented at the military parade which marked the 70th anniversary of the 'Victory of Chinese People's Resistance against Japanese Aggression and World Anti-Fascist War' at Tiananmen Square, September 3. Dela Pena/Reuters

China organised a massive military parade at Beijing on September 3 to mark the surrender of Japan 70 years ago. Beijing has witnessed similar parades 14 times since the People's Republic was established in 1949 -- but on October 1, the national day. The latest is the first parade under China's new leader Xi Jinping.

The parade was significant for several reasons. Firstly, it was primarily directed at the domestic constituents at a time when the 'new normal' economic growth rates are falling and political unrest through 'mass incidents' could create problems for the ruling Communist Party.

President Xi Jinping recently launched an anti-corruption drive that netted more than 20,000 people, mainly civilian cadres (like Bo Xilai, Zhou Yongkang, Ling Jihua) but also some senior military leaders like General Xu Caihou, General Guo Boxiong and others. Many of these cadres belonged to rival political factions in China. The presence of Communist Party 'elders' like the ailing Jiang Zemin and Hu Jintao -- Xi's predecessors as general secretary of the Chinese Communist Party and President -- at the parade provided succor to Xi, whose political legitimacy is expected to increase in the coming years.

Secondly, the parade was meant to send a signal of the 'coming out party' for China. While China has risen to become the world's second largest economy, it has had to not only overcome ideological restrictions imposed by Deng Xiaoping's 'keeping a low profile' strategy, but begin emphasising 'accomplish something.'

As a result, China has showcased its rise at the 2008 Beijing Olympics, the 2010 Shanghai Expo, the unveiling of a refurbished Ukraine-supplied aircraft carrier, then the Silk Road idea and the Asian Infrastructure Investment Bank.

The parade provided China an opportunity to seek global and regional blessings for its outward orientation and gain international legitimacy to a domestic event.

Over 30 countries sent representatives to the parade. Nearly 1,000 foreign troops from 17 countries marched in the parade, adding another departure for China -- moving away from its independent foreign policy towards any futuristic deployment of troops abroad, seeking bases abroad, and forming alliances and exploring friends in the international system.

And this is where another significance of the parade was visible -- challenging subtly the United States and its allies in the region. While the South Korean president participated in the event, Japan and the US shied away. Although Xi stated in his address at the parade that the event's purpose was to 'bear history in mind, honour all those who laid down their lives, cherish peace and open up the future,' the weapons exhibited at the ceremony showed China's exercise of conventional and strategic deterrence postures, specifically opposing the US.

While the explicit target is Japan, implicitly China is sending signals of 'setting up another kitchen' with the United States.

The parade featured 12,000 People's Liberation Army troops and 500 types of military equipment (which are said to be 84 percent new), flying 200 aircraft at the event. The troops, tanks, armoured personnel carriers and helicopters rolled out in precision.

But the strategic missile forces dominated the show.

The Dongfang 5B missile system is long range (about 12,000 km) and has multiple independent re-entry capabilities, meaning the missile would hardly be intercepted by the United States or other nations. The 16 Dongfang-21D medium range missiles displayed at the parade has been described as shashoujian -- the assassin's mace weapon. These systems manoeuvre to hit aircraft carriers in the region.

Today, the Chinese navy actively shoos away US naval vessels in the South China Sea and the DF-21D provides the assassin's mace weapon for China. Interestingly, extending the range of the DF-21D could also challenge Indian aircraft carriers if the missiles are launched from southwest China. Also, if Pakistan acquires these systems, these missiles could directly challenge India's aircraft carriers.

China also unveiled another medium range ballistic missile, the DF-26, which is in the range of the latest Indian Agni series of missiles. The DF-26 is meant to counter US military vessels in Okinawa and other bases. Another new addition at the Beijing parade was the medium range DF-16 missile system which possibly sends signals of deterrence to Japan. By announcing the demobilisation of 300,000 troop at the parade, China indirectly also tried to paint a negative picture of Japan which has been attempting 'collective self-defence' with the neighbourhood. The demobilisation represents the 11th such attempt to reduce China's infantry troops. After facing reverses in the Vietnam War in 1979, Deng Xiaoping criticised China's troops as 'lax, bloated and conceited.' Quantitative reduction then is to strengthen the quality of the troops.

By reducing its presence from President -- President Pranab Mukherjee traveled to Moscow in May to attend Russia's commemoration of the end of World War II -- to minister of state level (General V K Singh (retd) attended the Beijing parade), India is walking on the razor's edge of fine balancing between Japan and China.

Interestingly, the Beijing parade coincided with the high-level Indian and Japanese participation at Bodh Gaya of the International Buddhist Convention. Clearly, India is emitting balancing signals.

Srikanth Kondapalli is Professor in Chinese Studies at the Jawaharlal Nehru University. 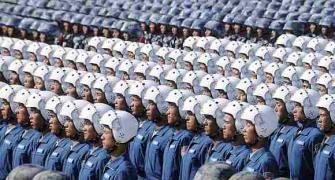 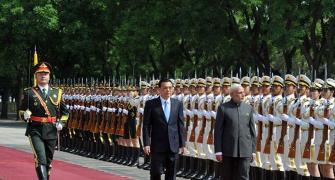 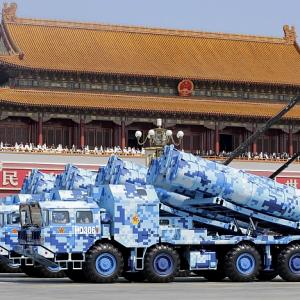 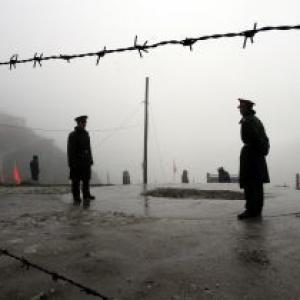