Rediff.com's Aslam Hunani introduces you to the lively lot of politicians at the helm of India's most important political province. 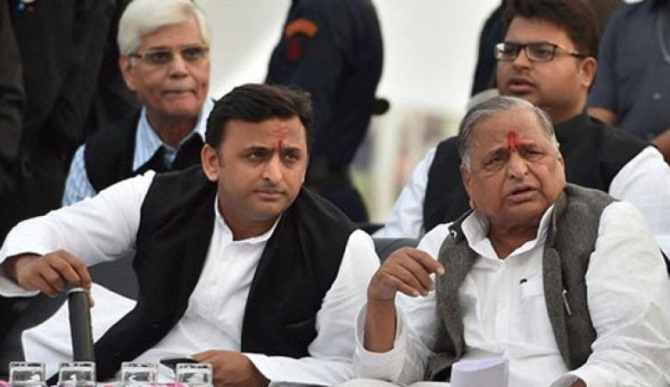 Uttar Pradesh has always been a hotbed of Indian politics.

With a crucial assembly election around the corner in UP, all eyes are set on who will win India's most important political state, a province that sends 80 MPs to the Lok Sabha.

Or will Akhilesh and his Samajwadi Party, bruised by a months-long family feud, be felled by Narendra Modi's unrivalled charisma and bring back the Bharatiya Janata Party to power after 14 years in political exile?

The last time UP had a BJP chief minister was in March 2002 -- Rajnath Singh, currently India's home minister.

And the Congress, you ask? The party, which dominated UP politics for about 40 years, is now a minor player, compelled by realpolitik to form an electoral alliance with the Samajwadi Party for this election or risk political evaporation.

Finally, it is a do or die election for the Bahujan Samaj Party's Mayawati.

If she loses a second assembly election in a row -- the BSP also did not win a single Lok Sabha seat in the 2014 election, from UP or anwyhere -- it could mean curtains for Behenji and an inevitable split in her party.

Check out our fact files about the parties who have won elections in UP and the men and women who have ruled the state.

Also note that UP is the only state in the Union which has come under President's Rule 10 times -- closely followed by Bihar at 9 times. IMAGE: A graphical representation of the political parties who have ruled Uttar Pradesh.

The last time the Congress ruled UP was in 1988, when Narain Dutt Tiwari -- who may or may not have jumped ship to the BJP in neighbouring Uttarakhand this election -- was chief minister (June 25, 1988 to December 5, 1989).

The Bharatiya Kranti Dal, a party formed by Chaudhary Charan Singh in the mid-1960s, ruled the state twice, for short spells of time.

The BKD merged into the Janata Party after the 1977 general election, which saw the Congress ousted from power in New Delhi for the first time after Independence.

The Janata Party too ruled the state twice, before Indira Gandhi returned to power at the Centre and UP in 1980.

After her younger son Sanjay Gandhi declined to be UP chief minister, Vishwanath Pratap Singh, the raja of Manda, took office.

'Netaji' -- as the former wrestler is hailed in his party -- is the only UP chief minister to represent two parties, the Janata Dal and the Samajwadi Party.

Mulayam Singh Yadav and his elder son Akhilesh Yadav are the only father and son to rule UP.

The BJP has ruled the state four times, but never completed a full five year term in office.

Mayawati was not the state's first woman chief minister.

That honour belonged to Sucheta Kriplani, who ruled UP for four years as the state's fourth chief minister and India's first lady chief minister.