'Mahasweta built and rebuilt her stupendous life with bricks of pain'

'She never desisted from calling a spade a spade and that's what made her such a unique character.' 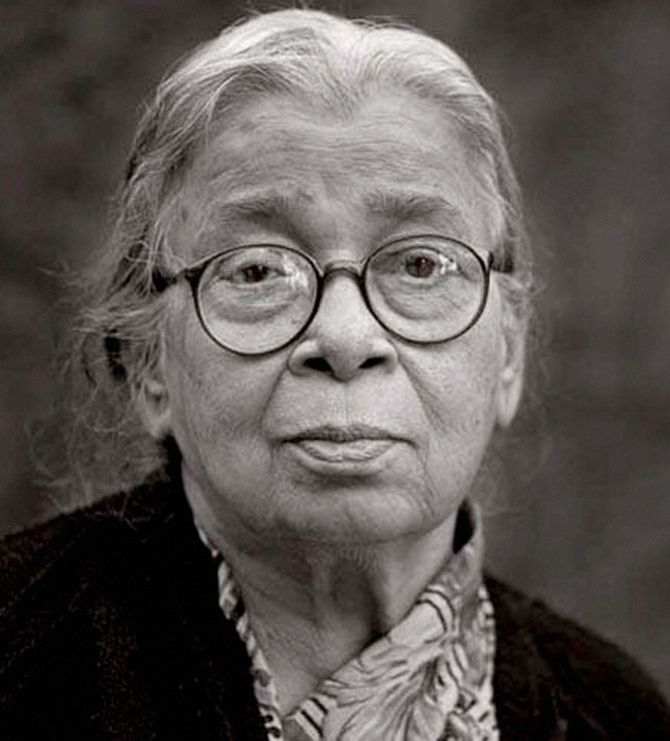 IMAGE: Mahasweta Devi: Will we see the likes of her again?

Author and activist Mahashweta Devi, who passed away after a prolonged illness on Thursday, July 28, wrote more than a hundred novels and 20 collections of short stories.

She was not only a celebrated writer, she was also a firebrand social activist who strongly raised her voice against the oppression of the tribals.

The winner of the 1996 Jnanpith Award and the 1997 Magsaysay Award, Mahasweta Devi firmly believed that 'real history is made by ordinary people.'

Rediff.com's Indrani Roy, who has known the great writer since her childhood, salutes Mahasweta Devi's memory.

I was all of 9. Thanks to my grandfather, who was a well known author, and my father, a publisher, I was introduced to the world of literature early on.

For reasons unknown to us, my grandfather's library had many rare books on Indian tribes which came to be most of my bedtime stories.

Whenever he read out chapters from those (rather unimpressive)-looking books, I was all ears.

During one of my father's customary weekend visits to writers' homes, he decided to take me along.

On the way, he told me we would be meeting one Mahasweta Devi, a writer who had a bag full of tales about the tribes of India.

It was an exciting piece of news, indeed!

Our first meeting was brief, but eventful.

As I touched the feet of a middle-aged lady wearing a crumpled saree and a casual bun, she scooped me up, kissed me on the cheeks and asked my name.

"You are known as Indrani to the world, but I christen you princess," she said.

As I grew older, I met her several times both at her home and at ours. And I remained her little 'princess.'

When I called her for interviews for Rediff.com, she would pick up the phone herself and in an unmistakable matter-of-fact voice, would ask, "Ke bolcho?" (Who is it?) "Oh, it's you, my princess!"

As my husband called me on Thursday afternoon to share the sad news, I could almost hear her whisper into my ears, "It's time, little princess."

Mahasweta jethima would rarely miss the adda sessions that my grandfather hosted at our home and would almost always be the centre of attention.

She was a foodie to the core and if anyone dared to warn her about her high blood sugar levels, she would frown and concentrate harder on the irresistible snacks on offer.

To her, life was a great journey that needed to be enjoyed to the hilt.

Her personal woes notwithstanding, she always wore a special one-sided smile that was affectionate yet strong, gentle yet resolute.

Praising her courageous fight against the odds of life, the late Leela Majumdar, a wonderful writer of yesteryear, once told my father, 'Mahasweta built and rebuilt her stupendous life with bricks of pain.'

Jethima was a like a banyan tree for us.

She was there like a solid rock when my grandfather passed away in 1994, was one of the first people to call after my mother's death in 2008.

When my father wrote his autobiographical history of College Street, the famous bookbazaar of Bengal, she volunteered to write the foreword.

Beneath the veneer of an apparently rough exterior, lay a mind that was full of warmth, affection and love.

She had a heart of gold that never stopped appreciating those who deserved it.

She spearheaded the movement against the Left regime in Bengal and was a key architect behind the so-called poriborton (change) that overthrew the Left Front rule in Bengal and ushered in a new Trinamool Congress government under Mamata Banerjee.

In an interview to me in 2009, she was vehement in her protest against the Left.

"Without a change, the state will be doomed," she said. "For 32 long years, the Left leaders have dragged the state back to the dark ages. There has been no improvement whatsoever in the field of education or literacy, health or infrastructure."

When I spoke to her again in December 2012, she did not mince words to voice her grievances against the Trinamool Congress government.

"If the TMC too goes the Left's way, it won't be long before the people decide to go against it," she said.

She never desisted from calling spade a spade and that's what made her such a unique character.

She was always there for any social cause that she thought was worth fighting for.

One could almost touch this steadfastness and uncompromising nature of hers in almost all her novels -- Hajar Churashir Maa, Aranyer Adhikar, Agnigarbha, Chotti Munda evam Tar Tir, Bashai Tudu to name a few.

Her love for the tribal people was phenomenal.

She was a part of their existence.

During my visits to a modest flat in south Kolkata that she stayed in for some time, I have seen tribal people from remote corners of Bengal sharing her bedroom.

She was a mother to all of them. She would share a bidi with them, have muri (puffed rice) and cha (tea) and would recount to me that how she had enjoyed rat meat for lunch during her stay in a tribal village.

I listened to her spellbound. Her winning awards as prestigious as the Sahitya Akademi, Jnanpith and the Magsaysay Award thrilled me.

My amazement knew no bounds when I learnt that she had donated whatever money she won for the cause of the tribals.

That was her. She was selfless in her fight for the cause of the tribals. She dedicated her entire life to it.

Mahasweta jethima had not been keeping well for the last few years. Yet, with her indefatigable spirit she ignored her age and related ailments.

"To her, nothing was impossible," my father once told me, adding, "Only once has she refused my invite to attend a seminar as her blood sugar level was alarmingly high at that time."

According to her grandson Tathagata Bhattacharya, an acclaimed journalist, it was the fighter in her that had been challenging death for the past few months.

She never thought of herself as a celebrity. Neither did celebrities matter to her.

She had great faith in the power of the people as she believed that 'real history is made by ordinary people.'